As a fifth-generation baker, pastry chef Martin Brunner has had plenty of lessons that have helped him perfect his recipes at The Bakehouse. Born in Austria, a country known for its Sachertorte, a cake so decadent, Viennese cafés have sued one another over disputes regarding originality claims, Brunner draws on European baking techniques. Try the Black Forest Cake.

Pam Kinney, owner of Central Bakery, started by sweeping floors and steadily worked her way up the ranks, from manning the register to decorating cakes to, eventually, obtaining the business in 1995, when she was just 27. Central Bakery’s pastry cases are always filled with customer favorites like oatmeal cream pies and cinnamon twists.

With its use of all-natural and NC-based ingredients, right down to the flour, Short Street Cakes is the real deal. The shop’s Vanilla Citradelic Cake, which includes New Belgium Brewing’s Citradelic IPA baked into a citrus cake, is a current favorite that features local flavors.

A cupcake shop owned by two sisters, their fun-loving personalities shine through in their baking ethos with fun flavors like Cinnamon Toast Crunch that complement traditional standbys, such as Old School Birthday Cake. 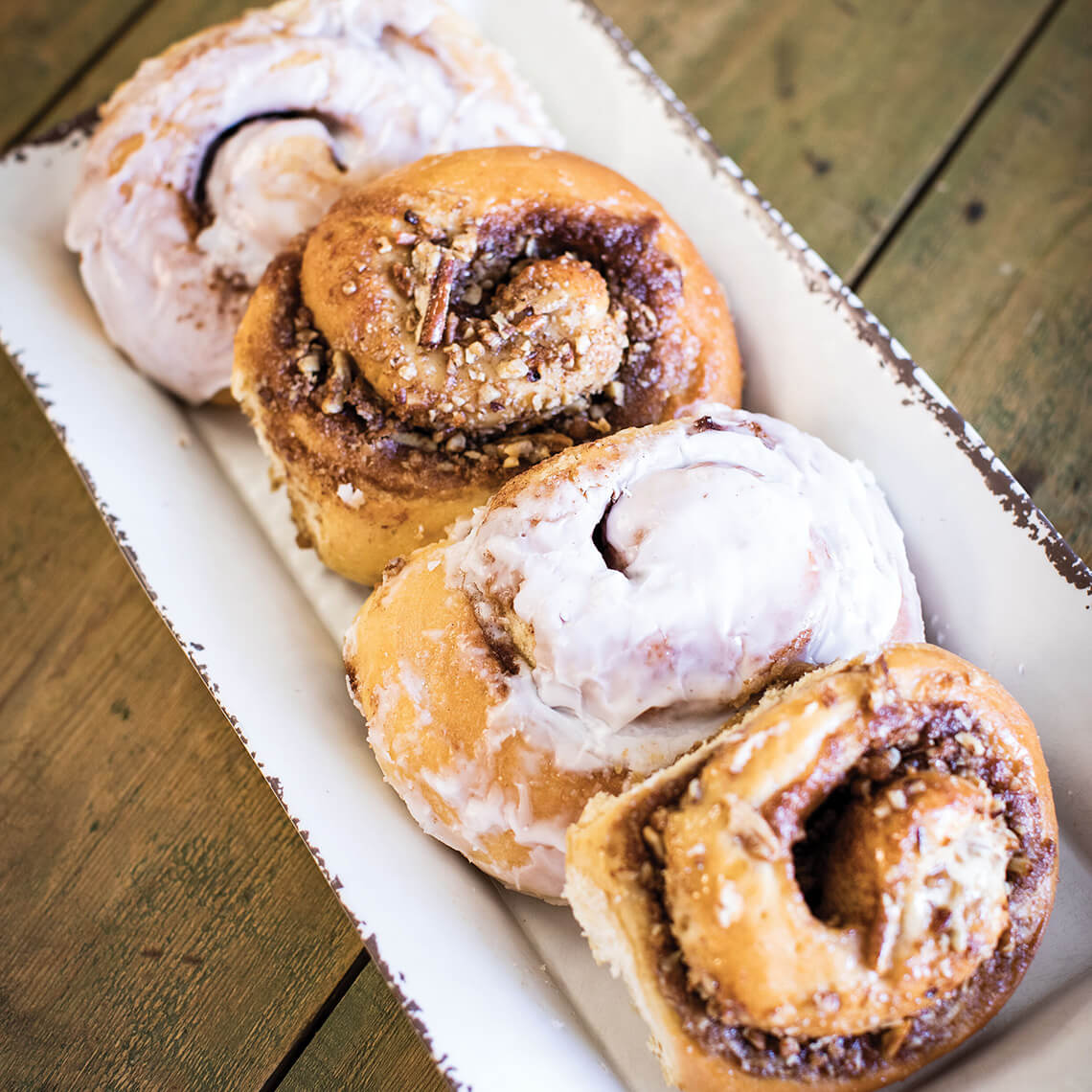 Perfectly golden sweet potato biscuits, a fixture on the menu since original owner Gail Umphlett opened the restaurant in 1984, have become famous in this corner of northeastern North Carolina — as have the sweet potato pecan cinnamon buns, inspired by the original biscuit recipe.

Once in a Blue Moon Bakery and Café — Cary

The hope of the bakers at Once in a Blue Moon is that customers leave happy. Considering the café serves cake, its mission is definitely an achievable one. A festive staple at the bakery is the Red Velvet cupcake — save one for us!

The Flour Girls Café & Bakery is an airy, cozy space for downtown workers on lunch breaks, families enjoying Saturday brunch, and friends catching up over a cup of coffee and a scone.

A fried croissant fresh from the kitchen at Burney’s Sweets & More practically glows under a halo of glaze — like a doughnut, but a little bit more everything. Crispier on the outside. Softer on the inside. And a more perfect vehicle for all kinds of fillings: cream cheese, chocolate, lemon, blueberry.

With its delicate balance of fluffy vanilla cake and rich frosting, the Classic Caramel Cake is a favorite at Maxie B’s, nodding to the shop’s Southern baking tradition.

There’s a good reason why HappyCakes was a winner on the Food Network show Cupcake Wars: Many of the shop’s ingredients, like its caramel, are made in-house. The Chocolate Pecan Pie cupcake is a cute and comforting version of the Southern favorite.

This bakery is technically not one at all; Cupcake Delirium is a truck that is spreading the cupcake love all around Charlotte. Anything with bacon is a hit, says owner Shannon Turrell, so go for the Elvis flavor, which features a banana cupcake, peanut butter frosting, and candied bacon.

A dream and plenty of pastries propelled a Beaufort County baker’s business from a market stand to a historic downtown building with an abundance of charm. Try the cinnamon buns and oatmeal cream pies. 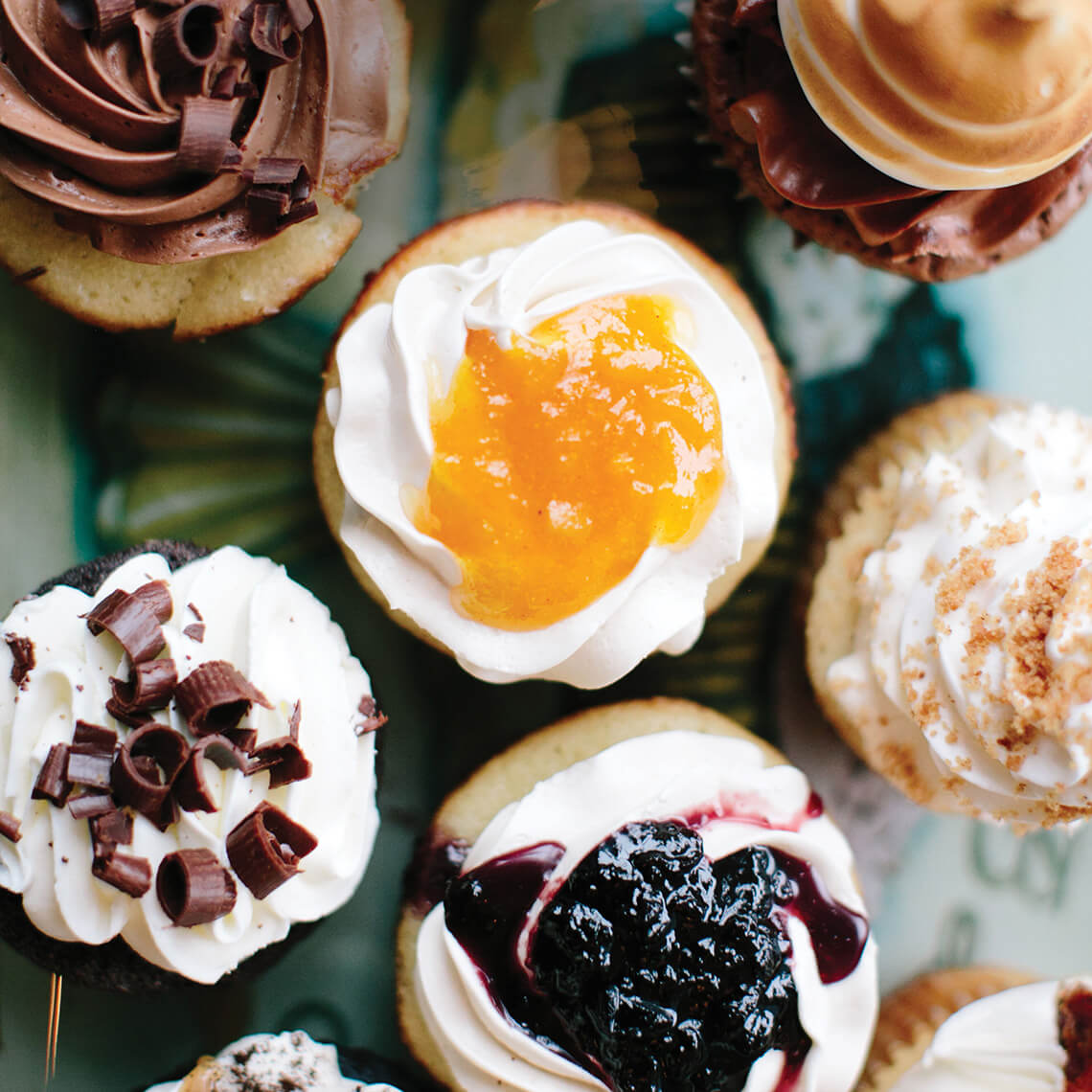 With more than 80 different flavors and ingredients ranging from mango to horseradish, The Peppered Cupcake is redefining dessert-eating as both a sweet and savory experience. Try the Pear with Hot Bacon Jam cupcake.

Dewey’s Bakery has been honoring the homemade baking tradition since it opened in 1930. Many Twin City residents go gaga for the bakery’s Moravian Cookie Thins.