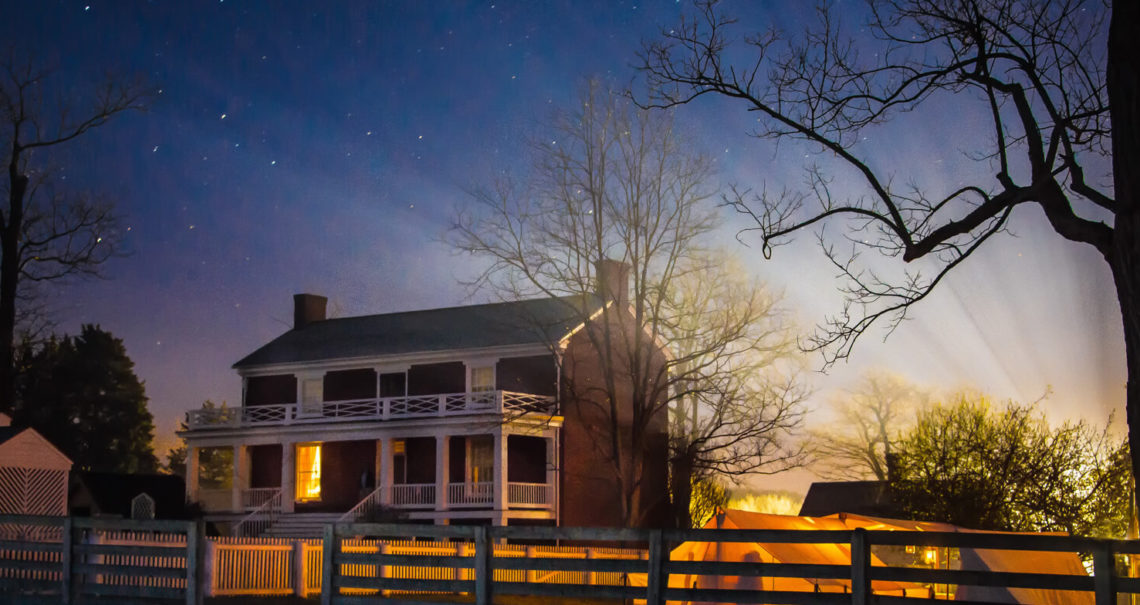 The Civil Rights in Education Heritage Trail winds through 15 counties in Southside Virginia and includes 53 distinct sites that tell the stories of the struggles and triumphs that Black, Native American, and female Virginians, faced in the pursuit for educational access. But don’t expect any timed stops or bossy guides — unless you’re the bossy guide. On this self-guided driving tour, visitors are in charge of their own adventure and are encouraged to explore the trail at their own pace.

Along the way, drivers wind through the beautiful Virginian countryside on two-lane roads, through charming downtowns, and even into bustling cities. Too many options to consider? We can help you make the most of your trip with our beginner’s guide. Explore our must-see sites along the Heritage Trail in Prince Edward, Mecklenburg, Appomattox, and Brunswick counties — plus other stops worthy of exploration in each area. Grab the wheel!

Virginia’s Crossroads – Looking for that hidden gem, you won’t have to dig very deep! Whether it’s outdoor recreation, extreme sports, history, antiques, distilleries and breweries, unique dining or just relaxing, you can Blaze Your Own Trail in southern-central Virginia. 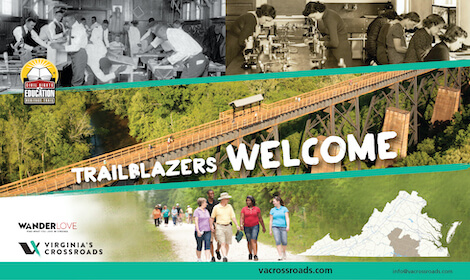 Prince Edward County refused to comply with government-mandated integration of schools, closing all of the schools within its borders in protest. In 1959, Black students from Prince Edward County traveled into Appomattox County to go to school. Class sizes swelled with as many as 50 students per class, but no students were denied the opportunity to learn.

Carver-Price High School was one of the schools that educated Black students from 1954 to 1966. Appomattox County started integrating its schools in 1970 and the high school became the integrated Appomattox Intermediate School.

In 2008, the Carver-Price Alumni Association created a museum to preserve the historic role the school — and Appomattox County — played in providing equal access to education. 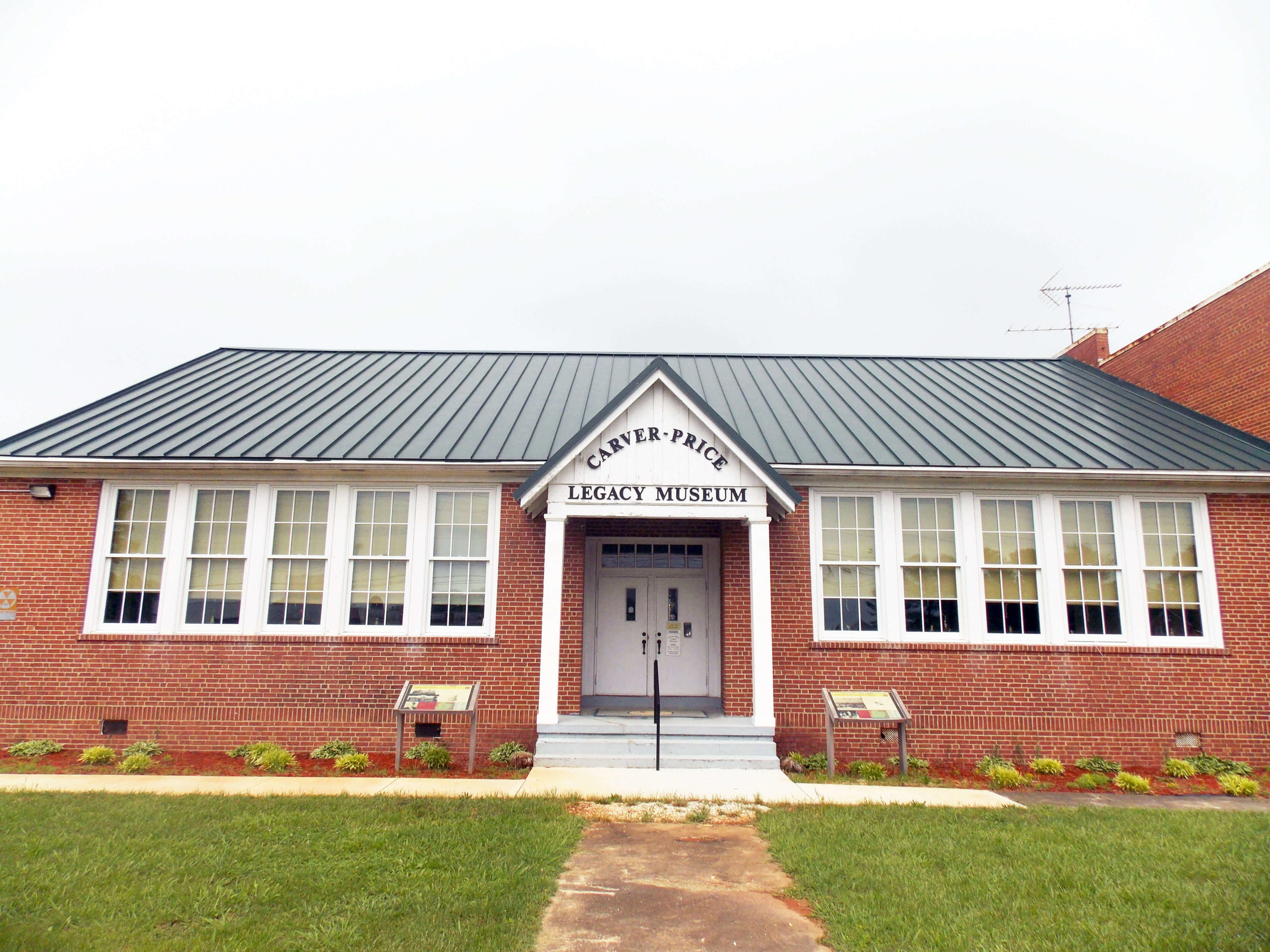 The Carver-Price Legacy Museum is housed in the original school buildings. photograph by Virginia's Crossroads

Appomattox Court House National Historical Park: This beautifully preserved 19th-century village in Appomattox was the site of the battle of Appomattox Court House, where the Confederate Army of Northern Virginia surrendered to the Union in 1865. The original courthouse and a reconstructed McLean House, the site of the surrender, are just one part of the 1700-acre site. The park, a national historic monument, is also home to restored buildings such as a county jail, law office, and tavern as well as miles of hiking trails.

American Civil War Museum at Appomattox: The permanent exhibit includes more than 400 artifacts that tell the story of the end of the Civil War. The museum also introduces rotating exhibits, like “Black Virginians in the Age of Emancipation,” to explore the lasting legacies of the Civil War.

Downtown Appomattox: The streets of the historic downtown district are lined with locally-owned shops like Baines Books and Coffee, Nina Bell’s Cottage, and Babcock House restaurant. Stop downtown to check out the shops and grab a bite before heading to the next stop on the Civil Rights in Education Heritage Trail.

Born into slavery in 1857, James Solomon Russell dreamed of pursuing an education and becoming a preacher. After graduating from Bishop Payne Divinity School — a CRIEHT Trail site located in Petersburg, Virginia — the first divinity school created to train African American preachers, Russell was assigned to a parish in Lawrenceville, Virginia, and it was during his tenure as an Episcopal priest that he realized how badly Black students needed more opportunities for education. In 1888, he started Saint Paul’s Normal and Industrial School, later known as Saint Paul’s College.

Many of the teachers who taught in schools throughout the county and across the state once earned their diplomas at Saint Paul’s College. Although the school closed in 2013, the former student center, now the Brunswick County Conference Center, houses the museum and archives, and the collection, which includes letters, photographs, and other artifacts, highlights the important contributions James Solomon Russell — and Saint Paul’s College — made to the community.

“[James Solomon Russell] had a vision and he brought that vision to life,” says Teya J. Whitehead, board member and alumnus. “The college had 125 years of history and the archives are what remains. We wanted to preserve that legacy.”

Tobacco Heritage Trail: The Tobacco Heritage Trail expands across several communities throughout southern Virginia, and Brunswick County is currently home to 14 miles of completed trail. Once part of the Norfolk Southern railroad, the Tobacco Heritage Trail winds through the picturesque countryside that was once home to acres of tobacco crops. Explore on foot, bike, or horseback, stopping to read interpretive signs that highlight local history. Don’t forget to pack a picnic lunch — picnic tables are located along the trail.

Kennon House: This historic landmark in Valentines, referred to as a “Mud House” and built in 1792, has been transformed into a fine dining restaurant hailed as the best around Lake Gaston. The menu features upscale Southern favorites like fried chicken, shrimp and grits, and Brunswick stew, all served in an intimate historic setting. 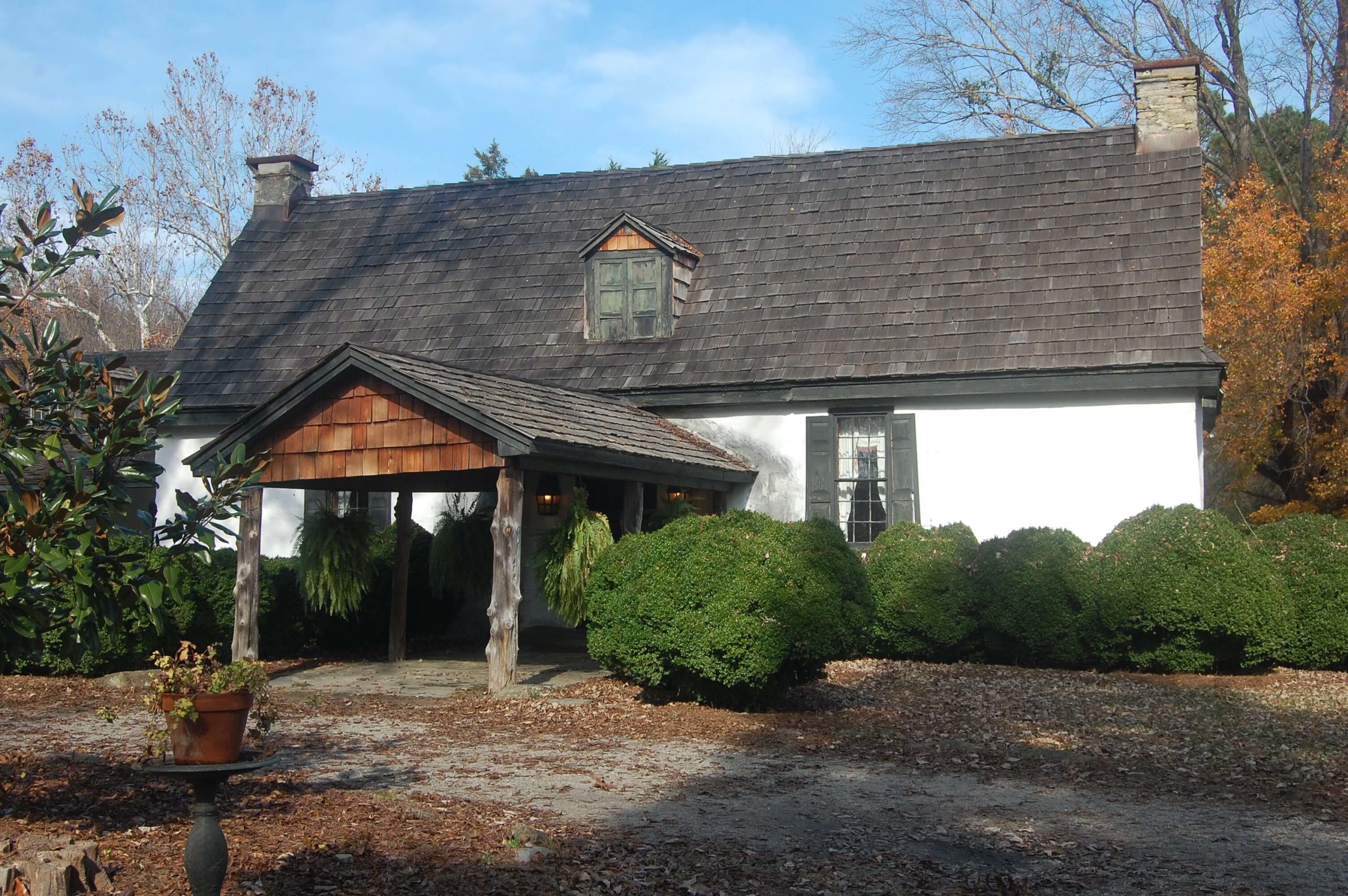 The Kennon House, built in 1792, has been transformed into a fine-dining restaurant. photograph by Virginia's Crossroads

Fort Christanna: When Gov. Alexander Spotswood established this fort in 1714, this westernmost outpost served as a center of trade and offered protection to settlers. It also served as a school to educate and convert Native Americans to Christianity, as well as teach Native American children how to read and write. Today, the fort is part of the CRIEHT Trail, and the 26-acre site adjacent to the Meherrin River is now a popular spot for recreation thanks to hiking trails and abundant flora, fauna, and wildlife.

In the late 19th-century, a group of Presbyterian missionaries, who were concerned about the lack of opportunities for Black students to pursue an education, decided to establish a school. A local man, John Thyne, donated five acres of land for the campus. From 1876 to 1923, it was the only school in the county open to Black students, and it enrolled students from as far away as New York and Ohio.

At the Thyne Institute, students studied agriculture and the domestic arts, and often furthered their educations at state colleges after graduation. The school, which remained open until 1953, later became part of the Mecklenburg County Public Schools system.

The historic school was torn down in the 1970s, but alumni donated artifacts such as class rings, yearbooks, diplomas, and report cards to create an exhibit at MacCallum More Museum and Gardens to ensure future generations know about the impact of the school on the local community.

The Boyd Tavern: This historic building in Boydton once served as a Confederate recruiting station during the Civil War and was later turned into a small tavern. Although the 1790 building has been expanded and renovated over time, it’s been a fixture in the community for centuries, and is one of the only structures within city limits that is older than the town itself. You can no longer order a pint at the bar, but the historic structure is open for tours. 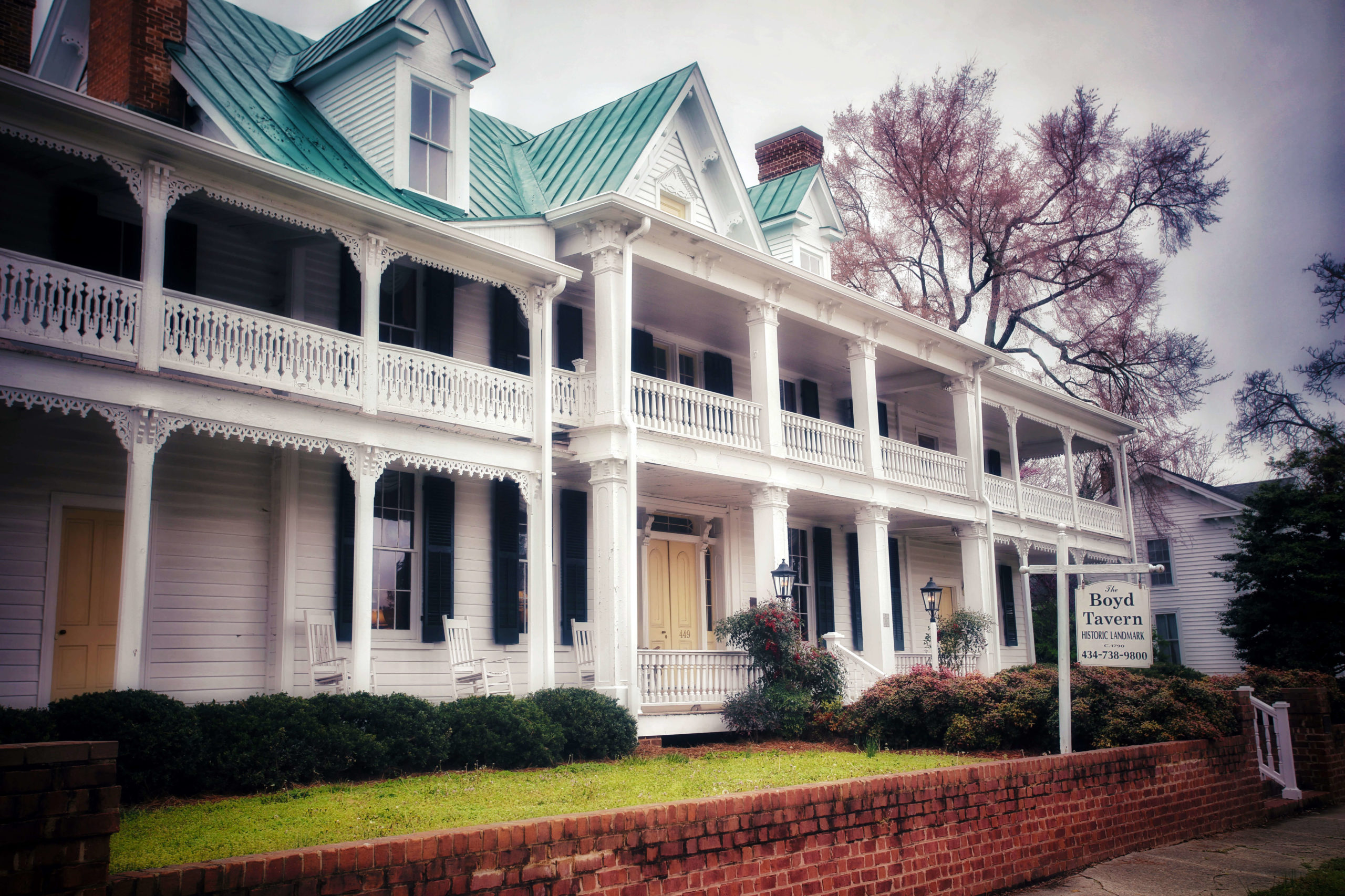 The Boyd Tavern has been a fixture in the community for centuries. photograph by Mecklenburg County

Prestwould Plantation: Sir Peyton Skipworth built this plantation in Southside for his second wife, Lady Jean Skipworth, in 1795. Aside from a small number of Union soldiers who stopped there briefly, the Civil War virtually bypassed the area, which, today, means that Prestwould is incredibly well-preserved. Built from stone quarried on the site, it still contains more than 80 percent of its original furnishings, including its notable 18th-century English botanicals wallpaper.

Bondurant Brothers Distillery: Jack Bondurant was one of the infamous Bondurant Brothers, a group of three brothers running moonshine in Franklin County during Prohibition. Today, Jack’s grandson, Robert Bondurant, runs this Chase City distillery using time-honored techniques to make award-winning (and yes, legal) moonshine. The distillery is located in the former 1912 Hammer Mill and is open for tours and tastings.

In 1933, a group of Black men joined the 1390 Civilian Conservation Corps Company in Prince Edward, Virginia. The Depression-era federal program was designed to put American men back to work doing conservation projects — but the same men who constructed dams to create Goodwin Lake and Prince Edward state parks could not even use those facilities due to segregation.

In 1948, a lawsuit was filed challenging the policy of whites-only state parks; the legal challenge led the Virginia Department of Conservation to create the new Prince Edward State Park for Negroes. When it opened in June 1950, it was the only park for African Americans built in the pre-civil rights era. Eventually, the park merged with Goodwin Lake State Park and was renamed Twin Lakes State Park.

“As the civil rights movement evolved, the two parks were legally integrated in 1964 and became one unified park in 1972,” explains Dr. Melissa Baker, the director of Virginia State Parks. “It took years, however, for the two sides to integrate socially.”

Today, the 548-acre park remains a popular spot for hiking, swimming, fishing and boating. Baker suggests walking Between the Lakes Trail where visitors to both segregated parks would see how far into the other park they could walk before being turned around. “Rumor has it, they would carve their initials into trees to mark their progress,” Baker adds.

Downtown Farmville: Stop for lunch and a stroll through charming and historic downtown Farmville … and OK, maybe some shopping, too. Work up an appetite browsing antiques and home decor in downtown shops. Then head to Charley’s Waterfront Café & Wine Bar, located inside a restored warehouse with a deck overlooking the Appomattox River, where you’ll find a picture-perfect view — and delicious food. Warm up with a cup of soup or try a Chesapeake Bay-style crab cake sandwich.

Robert Russa Moton Museum: The high school-turned-museum in Farmville — another site along the CRIEHT Trail — is hailed as the birthplace of the student-led civil rights movement. Explore exhibits explaining the local connection to the historic Brown vs. Board of Education ruling, listen to archived interviews with historians, and learn about the brave students who participated in the local fight for equality.

Appomattox River Company: Farmville is home to several popular — and beautiful — spots for paddling, including the Farmville Blueway and Bear Creek Lake State Park. If you need gear to get out on the water, this outfitter stocks canoes, kayaks, and stand-up paddle boards — and is a great home base for adventurers. 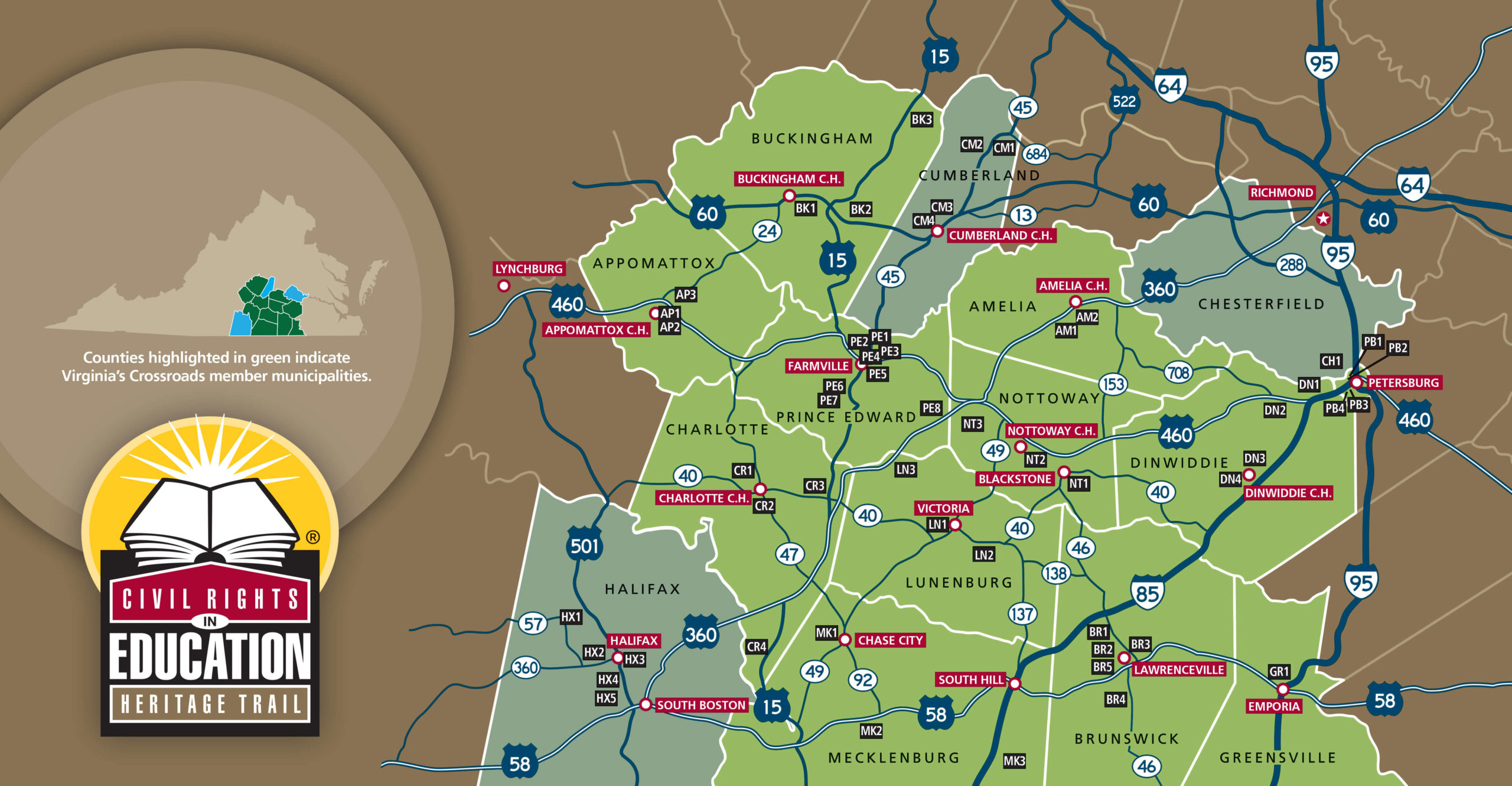 Build your own CRIEHT tour using this map, which shows all the counties where the trail extends.