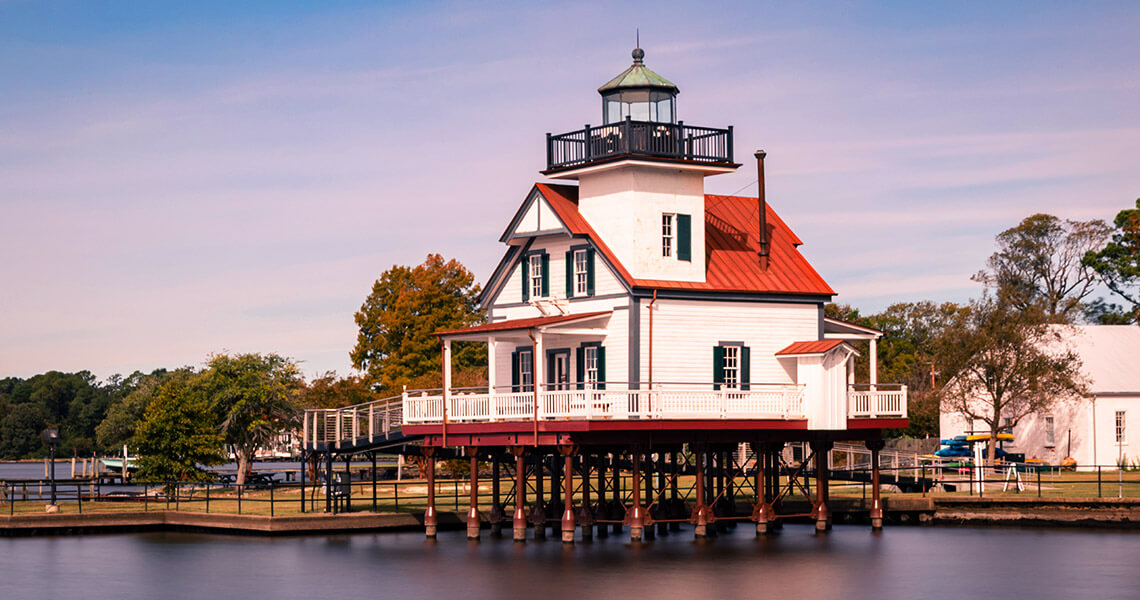 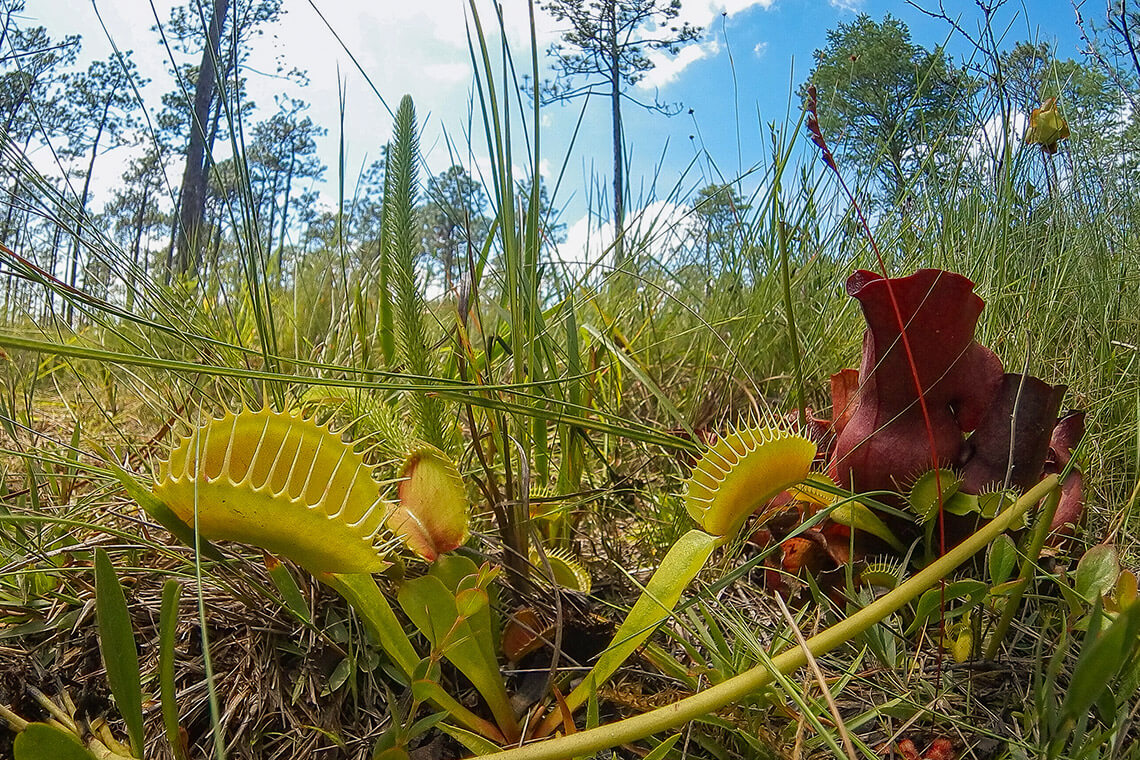 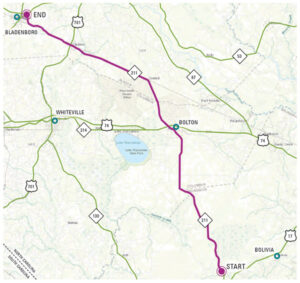 Stretching more than 51 miles through Bladen, Brunswick, and Columbus counties, the Green Swamp Byway shows off eastern North Carolina nature at its finest. The Green Swamp Preserve, spanning nearly 17,000 acres, is home to an abundance of flora and fauna, including at least 14 carnivorous plant species, the endangered red-cockaded woodpecker, and alligators.

In nearby Bolton, Freeman’s Grill fries up a mean catfish sandwich. Just off the byway, Lake Waccamaw State Park provides opportunities for primitive hike-in camping, plus paddling on Lake Waccamaw — the largest of the geologically mysterious Carolina Bays, with aquatic life found nowhere else on Earth.

The route ends in Bladenboro, where Diamond Dave’s Grill serves breakfast and lunch. Locals recommend the hamburgers or the fried chicken — cooked like Grandma makes it. 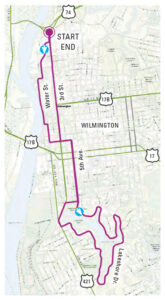 This 10.5-mile scenic urban loop in Wilmington begins and ends at the Isabel Holmes Bridge over the Cape Fear River. You’ll first see 1898 Memorial Park with its memorial to the victims of the Wilmington Race Riot, in which the city’s biracial government was violently overthrown on November 10, 1898.

On the opposite side of Third Street, the Wilmington Riverwalk is a two-mile waterfront walkway featuring shops, restaurants, and river cruises departing from the docks. At the Wilmington Railroad Museum, see a 100-year-old steam locomotive and learn about the history of railroads. Food and beverage options abound: Have a Port City IPA at Front Street Brewery or grab a Blackbeard BLT at Anne Bonny’s Bar and Grill, Wilmington’s only floating restaurant. Across the water from the Riverwalk, the Battleship North Carolina is docked. The ship played a key role in several World War II battles and is now open for tours.

From the Riverwalk, hang a left onto Castle Street and check out the art galleries, antiques shops, and murals in the Castle Street Arts District. “It’s a fun place to spend a little time shopping and maybe grab some breakfast or lunch,” says Connie Nelson, communications and public relations director for the Wilmington and Beaches Convention and Visitors Bureau.

The farthest portion of the byway loops around Greenfield Lake, a great place for paddling, biking, or spotting wildlife like alligators and great blue herons. On the way back, tour the Bellamy Mansion Museum, a late antebellum-era home, as well as its gardens and quarters for enslaved people. 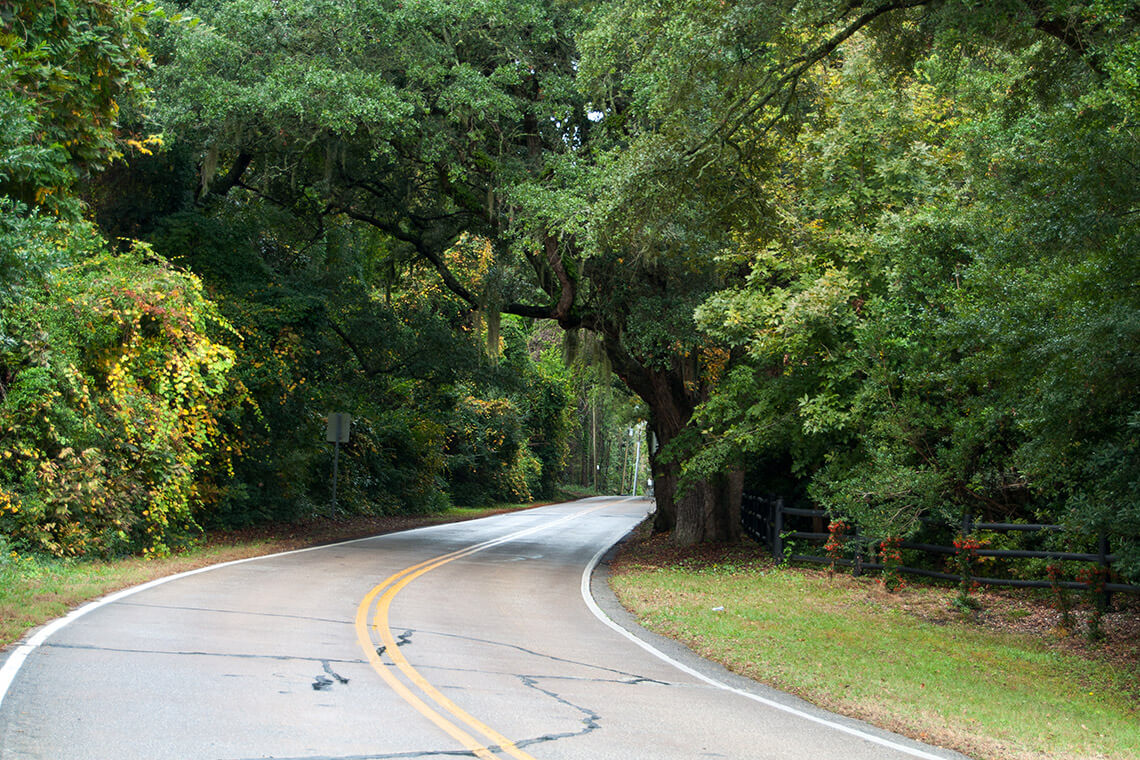 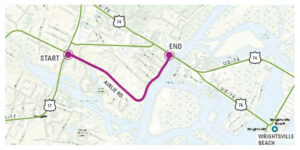 East of the Cape Fear Historic Byway, in New Hanover County, lies the 1.5-mile Airlie Road, where a tunnel of oaks draped in Spanish moss opens onto views of the Intracoastal Waterway. “[Airlie Road] is a beautiful little stretch of road,” Nelson says. “It’s peaceful and quiet. It’s lovely with the water and the ancient live oaks, as well as some beautiful homes.”

Airlie Gardens, purchased by Pembroke and Sarah Jones in 1884 and now open to the public, features guided tours, bird walks, and butterfly releases. Don’t leave the gardens without a visit to the Bottle Chapel, a glittering glass installation by Wilmington artist Virginia Wright-Frierson in honor of the late Wilmington painter and Airlie gatekeeper Minnie Evans.

The road then curves to the left, with a view of Bradley Creek — part of the Intracoastal Waterway — to the right. For waterside dining, pull in at Dockside or Fish House Grill and enjoy fresh seafood. The byway ends at the Wrightsville Beach drawbridge, the access point to the surf and sand, shopping, and dining of Wrightsville Beach. 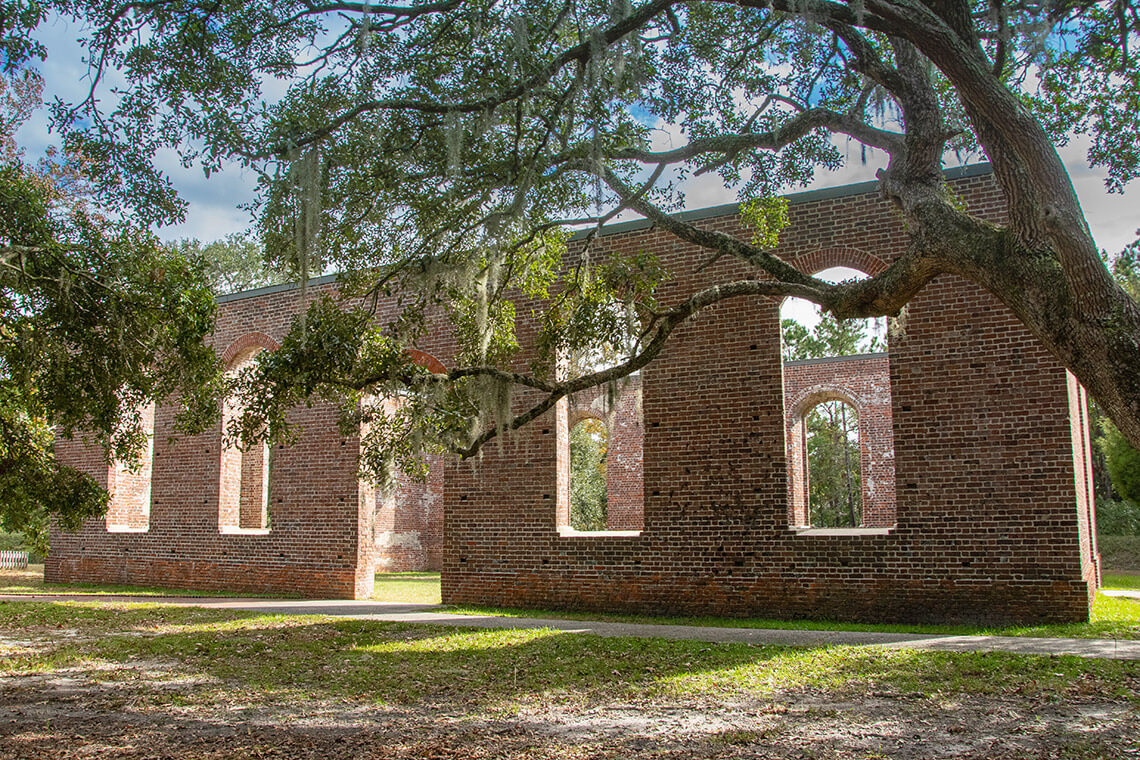 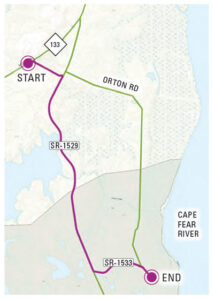 South of the two New Hanover County byways, Brunswick Town Road runs for 2.3 miles in Brunswick County, passing Orton Pond and longleaf pine savannas. “It’s an incredible place to see wildlife,” says Jim McKee, site manager at Brunswick Town, adding that birdwatchers like to come out in the mornings to see ospreys, bald eagles, herons, and hawks. “Sunset on Orton Pond is amazing; the sun sets right over the pond, and you see the reflection of the sun on the water.”

“The drive is really scenic,” adds Randy Jones, director of community relations for the city of Southport. “It’s a great area with beautiful trees, old live oaks, and Spanish moss. You could look at one of the ponds and there could be an alligator. It’s nature at its best. And it has a wonderful gift at the end when you get to Brunswick Town.”

Brunswick Town was a port on the Cape Fear River that was destroyed by British Forces in the Revolutionary War. During the Civil War, Fort Anderson (pictured above) was built on the site of the former town. Visitors can see the foundations of colonial residences and the walls of the fort while walking along trails through the site. Southport is a 12-mile drive south of the fort. 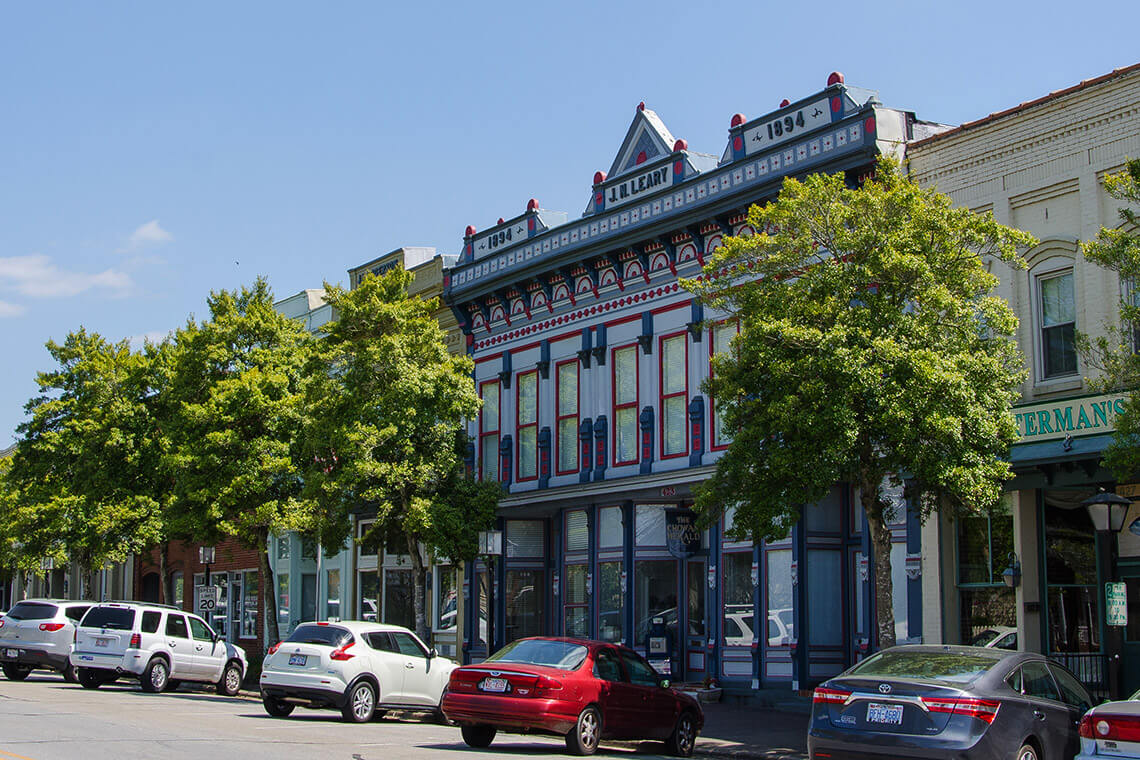 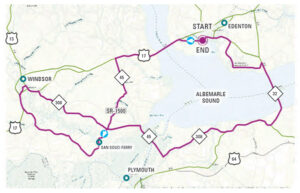 This figure-eight loop takes motorists through more than 78 miles of Bertie, Chowan, and Washington counties. Traveling from Edenton to Windsor and back again, the road crosses the Chowan and Cashie rivers and passes through historically significant towns.

From there, cross the Chowan River on the Edenhouse Bridge, then cross the Cashie River on the Sans Souci Cable Ferry — one of the few remaining two-car, cable-operated ferries in North Carolina.

The byway then makes its way to Windsor, settled in 1722 and the site of the colonial trading port Gray’s Landing. In town, have a sandwich, salad, or sub at Rachel’s Bakery and Café, or have wings or a burger at Chief’s Sports Bar and Grill. Windsor offers fine examples of 19th- and 20th- century residential architecture, and just outside of town, on NC Highway 308, the circa-1800 Federal-style Hope Plantation — the former home of Gov. David Stone — is listed on the National Register of Historic Places and is open to the public.

Traveling east from Windsor, motorists will cross the confluence of the Cashie, Middle, and Roanoke rivers on Three Rivers Bridge, the site of an 1864 Civil War battle. Shortly after the bridge is the Conaby Creek Access Area, where paddlers can launch a kayak. The route then hugs the Albemarle Sound before crossing it and heading back to Edenton. 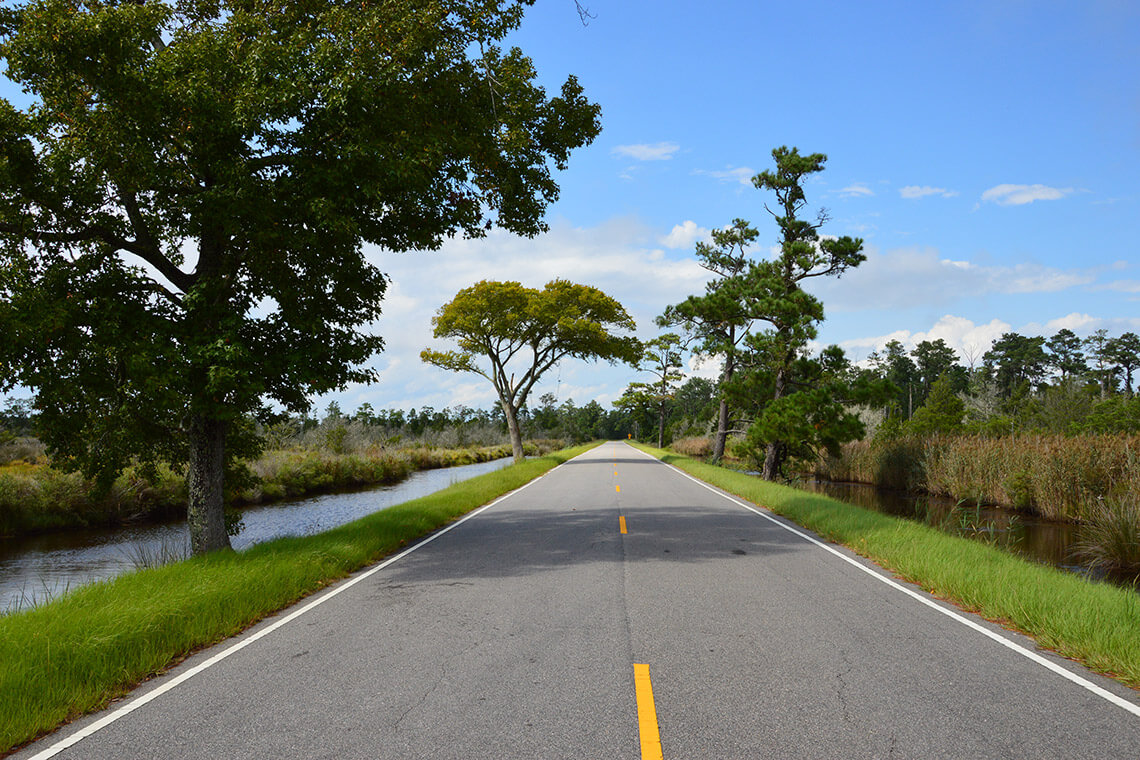 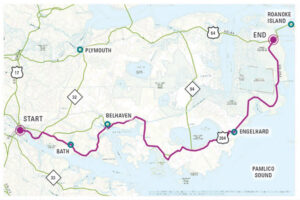 Beginning in Washington and traveling along the Pamlico River as it widens and flows into Pamlico Sound, the Pamlico Scenic Byway traverses 122 miles of preserved lands, farmland, and historic areas in Beaufort, Dare, and Hyde counties.

In Washington, the North Carolina Estuarium features more than 200 exhibits, aquariums, and interactive displays that educate visitors about our estuaries and coastal rivers. After exploring, stop at Backwater Jack’s Tiki Bar & Grill for a shrimpburger with a view of the water before hitting the road.

Head southeast toward Bath, the oldest incorporated town in the state, to take a historical walking tour and see St. Thomas Episcopal; built in 1734, it’s North Carolina’s oldest church. Just around the corner, check out The Pirate’s Treasure gift shop for locally made crafts, then walk over to Bonner’s Point for a waterfront picnic. Before heading out, stop by Duke & Dutchess Coffee Shoppe for a cup of locally roasted joe — or ice cream.

The N.C. Department of Transportation has designated 62 byways to give travelers an opportunity to leave the highways and experience North Carolina’s immense history, geography, and culture. Request the NC Byways Guidebook today to begin your journey! 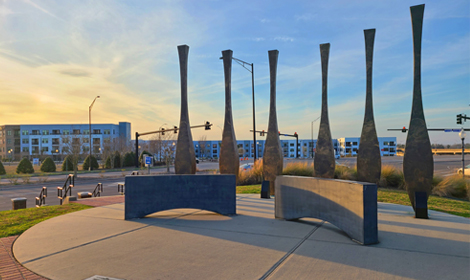 From Bath, the route passes over Pungo Creek and the Pungo River. Between the two is The Weathered Soul Shoppe, offering antique and gently used furniture. After crossing the river, the byway reaches Belhaven, a popular stopover for boats along the Intracoastal Waterway. There, you can try the fileted flounder stuffed with local crab meat at Fish Hook’s Café and shop for home decor items perfect for a beach cottage at Coastal Cottage Life.

Leaving town, the byway takes motorists to Swan Quarter, where two markets — Hobo Seafood and Newman Seafood — offer fresh, locally caught shrimp and fish. The route then passes along the natural freshwater Lake Mattamuskeet and the Mattamuskeet National Wildlife Refuge, home to hundreds of species of wildlife, including bobcats, otters, black bears, and an array of bird species.

In Engelhard — the last stop for restrooms and fuel for the next 40 miles — Martelle’s Feed House Restaurant offers a country-style buffet featuring barbecue, shrimp, and ribs. The route then heads north through Alligator River National Wildlife Refuge, home to endangered red wolves found only in eastern North Carolina, before ending in Manns Harbor, just before the Virginia Dare Memorial Bridge. 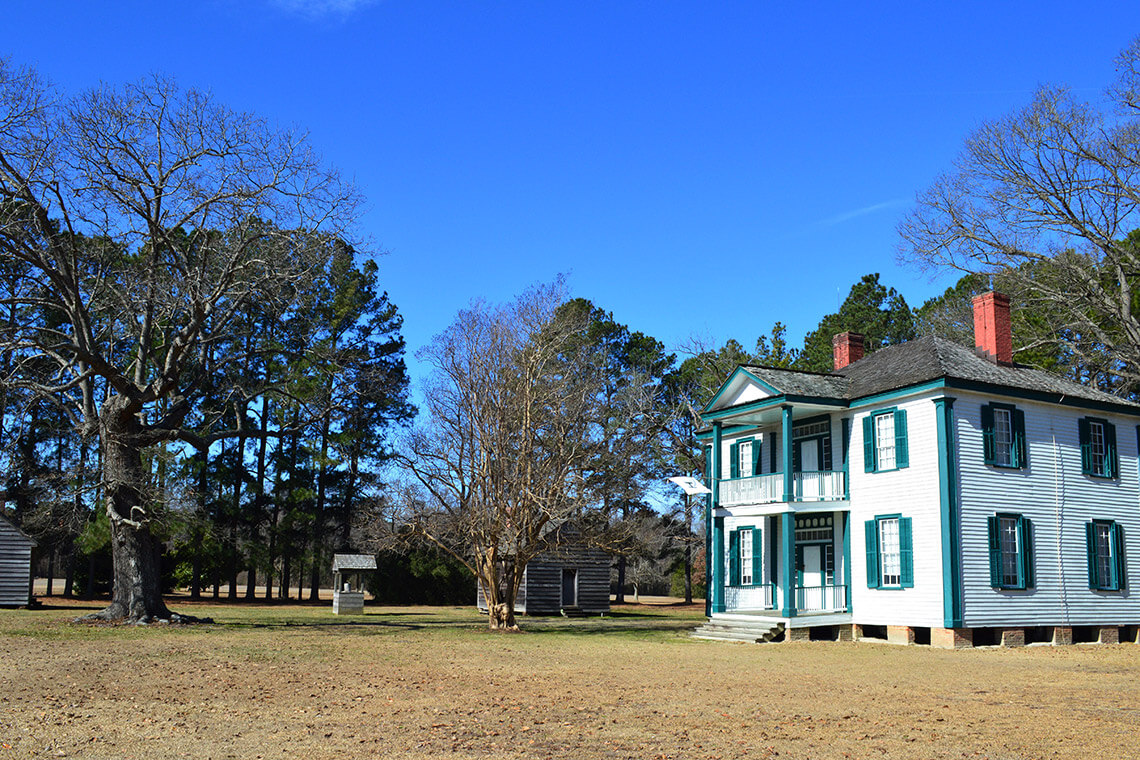 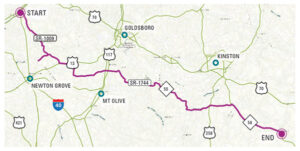 This 84.4-mile byway, which crosses Johnston, Jones, Lenoir, and Wayne counties through sites rich with Civil War history, is a perfect route when you’re heading to the coast. Leaving Four Oaks on Devil’s Racetrack Road — so named because of a local legend that travelers along the road could hear the hoofbeats of the Devil’s horse — the byway passes the Howell Woods Environmental Learning Center, with trails for hiking, horseback riding, and biking, plus fishing and camping. “Devil’s Racetrack Road is very rural,” says Donna Bailey-Taylor, president and CEO of the Johnston County Visitors Bureau. “You’ll see a lot of tobacco, corn, and sweet potato fields.”

Just outside of Bentonville, the Bentonville Battlefield State Historic Site (pictured above) is the location of the largest battle ever fought in North Carolina, where Gen. William Sherman defeated Gen. Joseph Johnston in 1865. An exhibit in the site’s visitor center gives a visual and narrative demonstration of the battle’s maneuvers.

In Dudley, pull over for pizza or a sandwich at Roseli. Farther along the route, Cliffs of the Neuse State Park features spectacular riverside cliffs. East of the park, in Seven Springs, is where the CSS Neuse was built near the Neuse River Bridge. The ship was later damaged in the Battle of Whitehall — the town’s original name — as Union soldiers marched north toward Goldsboro.

When you arrive at the Deep Run farming community, grab a sandwich, pizza, or pasta at The Farmhouse, and finish off your meal with one of the restaurant’s famous milkshakes. Or stop for a bite at Aggie’s Pizza and Subs in Trenton. The byway ends in Trenton, but the shops, dining, and historic sites of New Bern aren’t far away.

Learn more about the scenic byways of North Carolina.