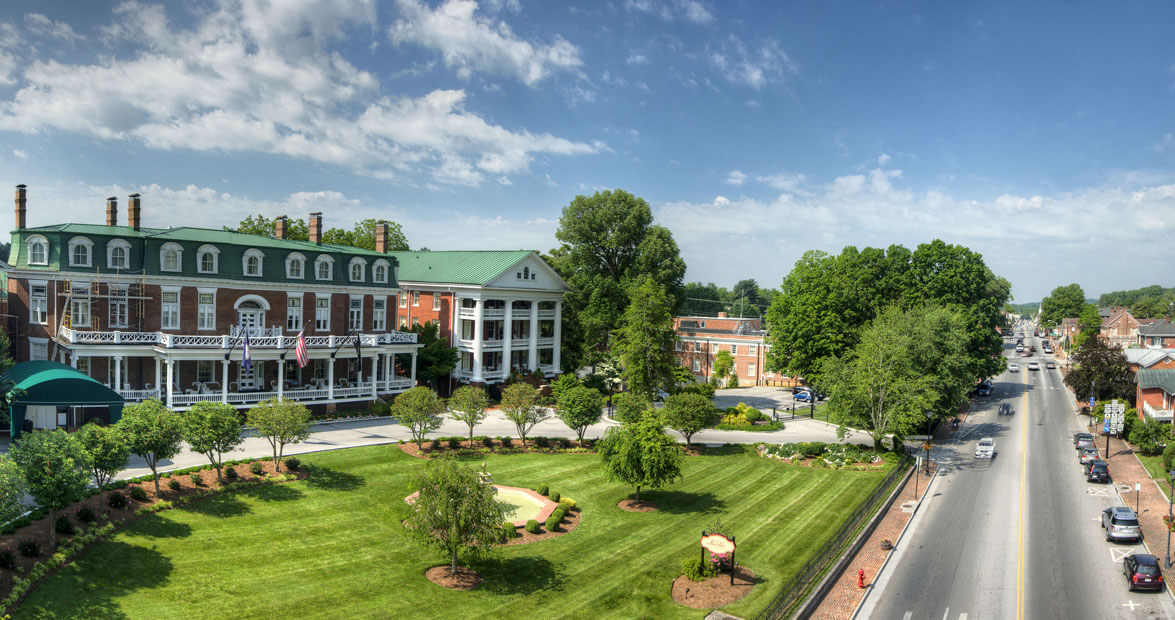 It’s 9 a.m. — hours before Barter Theatre’s first performance of Camelot — and a line of theatergoers hoping to secure tickets for tonight’s show is already forming down Main Street in Abingdon, Virginia. These locals are in on a Barter tradition: At “Pay What You Can” night, anyone can afford to see a Broadway-quality play in their own town.

“Some of these people have been coming here forever, and some have never been to Barter,” says Tina Foster-Jones, who works in Barter Theatre’s lounge. Foster-Jones was in high school when she saw her first play, and each of her school-age children are active in Barter Youth Academy. “Once you go, you’re hooked.”

Located downtown, across the street from the historic Martha Washington Inn & Spa, Barter Theatre is a fitting anchor for the culturally rich town of Abingdon. Less than 15 miles from the North Carolina border, Abingdon is a magnet for visitors hoping to catch a show or bike the famous Virginia Creeper Trail. And like Barter, one visit reels them in.

Planning a trip? Consult our roundup of can’t-miss culinary, arts, and entertainment stops to experience the best that Abingdon has to offer.

Find your way to play in the artsy town of Abingdon, VA. Bike through the incredible scenery of the Virginia Creeper Trail, unwind at The Martha Washington Inn & Spa, and take in a show at the famous Barter Theatre. 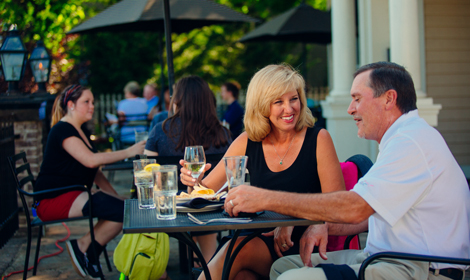 Kick off your visit to Abingdon with a walk down historic Main Street. On a stretch of brick sidewalk surrounded by century-old architecture, you’ll get the lay of the land and a feel for downtown’s eclectic shops and restaurants. Stop in at Zazzy’Z roastery for a bold cup of coffee and a country ham biscuit. If your plans include a day on the trails, load up your picnic basket with Zazzy’Z sandwiches and wraps.

Abingdon boasts more restaurants per capita than San Francisco, New York, and New Orleans — and this diner is a locals’ favorite for upscale German-American fare. Be sure to make a reservation for dinner in the cozy dining room or on the shaded terrace of Abingdon’s oldest building. Sipping a glass of wine from The Tavern’s impressive menu, you’ll join a long list of VIPs that includes King Louis Philippe of France and President Andrew Jackson. 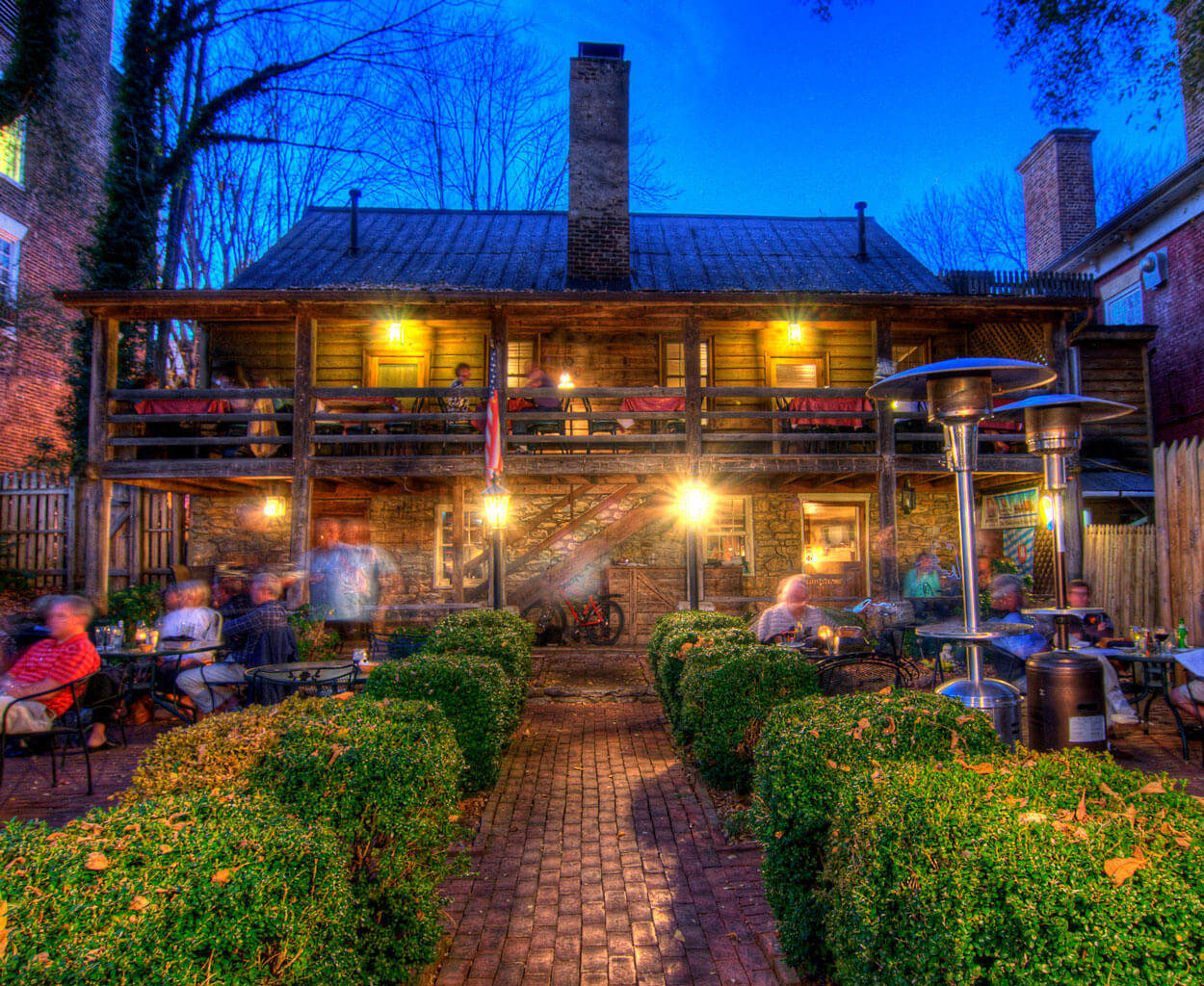 On warm nights, dine on the outdoor patio at The Tavern Restaurant. photograph by Jason Barnette

When owner and Executive Chef Ben Carroll opened this downtown restaurant and bar, he envisioned “a fun, casual place where you could always count on getting great food and outstanding service at a fair price — without the pretentiousness that comes with some of the really high-end restaurants.” Mission accomplished. Order the Honey-Sriracha Confit Chicken Wings to share, and save room for one of Rain’s house-made desserts.

In the heart of downtown, The Martha has been an Abingdon mainstay since 1832. To get a taste of the hotel’s historical grandeur — past lives include personal residence, school, Civil War hospital, and resting spot for traveling actors at the neighboring Barter Theatre across the street — plan to have a meal at Sisters, the hotel’s American-fare grill. Before you settle in, sip a cocktail on the front porch. 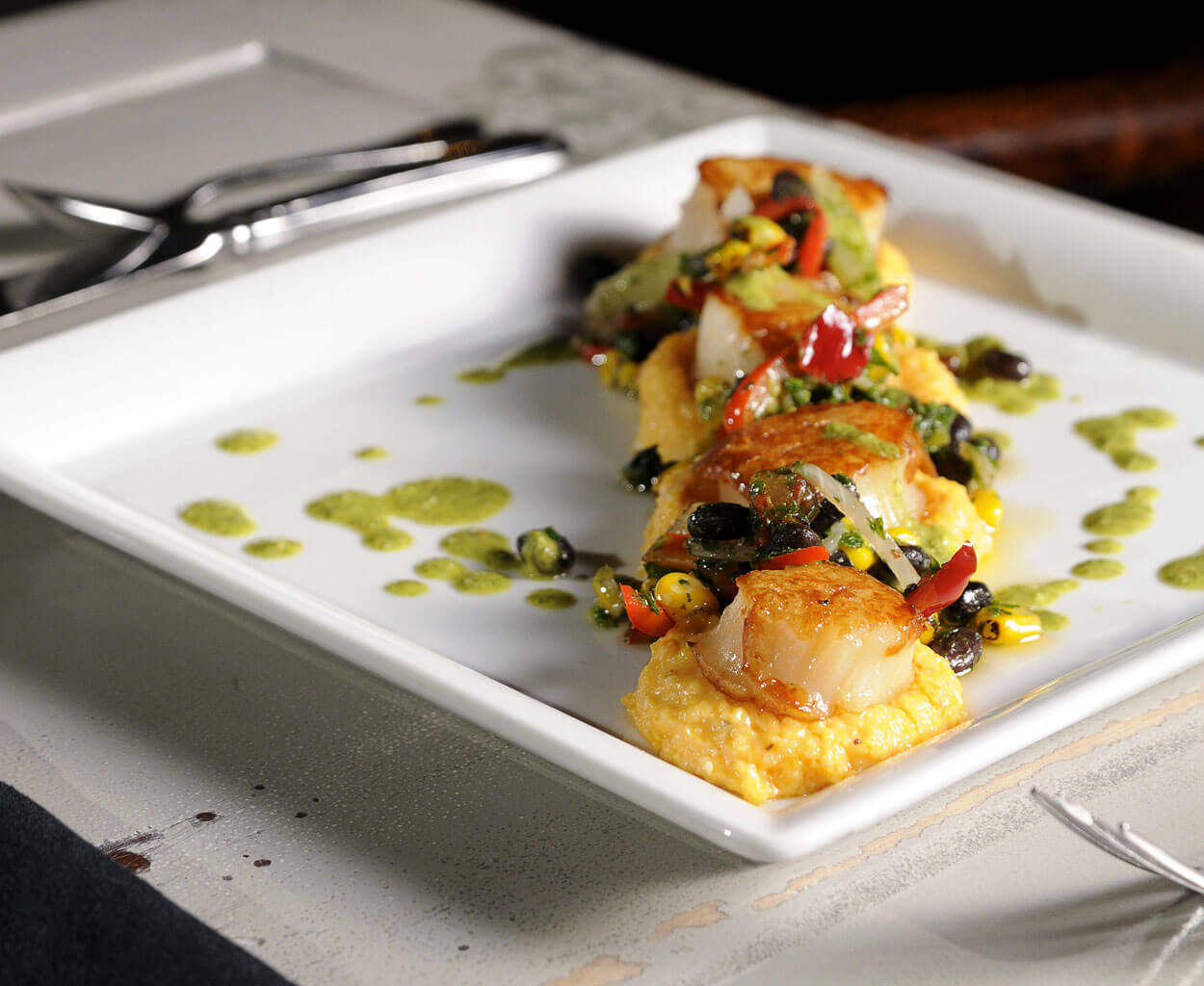 Shaded by the grove of trees that surrounds this hilltop high school-turned-museum, visitors to the William King Museum of Art get a postcard-worthy view of Abingdon. After a stroll around the grounds, check out the historic museum’s three rotating exhibits, one permanent exhibit, and a single-artist exhibition — plus five working artist studios. “Our tagline is ‘never the same museum,’ and that’s a big draw,” Director Betsy White says. “People get very excited about the original pieces of pottery that were made here, the beautiful quilts and coverlets, as well as the artwork and furniture.”

What started as a craft co-op in 1971 now represents more than 130 local makers. Swing by to see the handmade masterpieces of local artisans, including quilters, woodworkers, potters, and fiber artists, and take a piece of Abingdon’s arts-and-crafts heritage home with you. 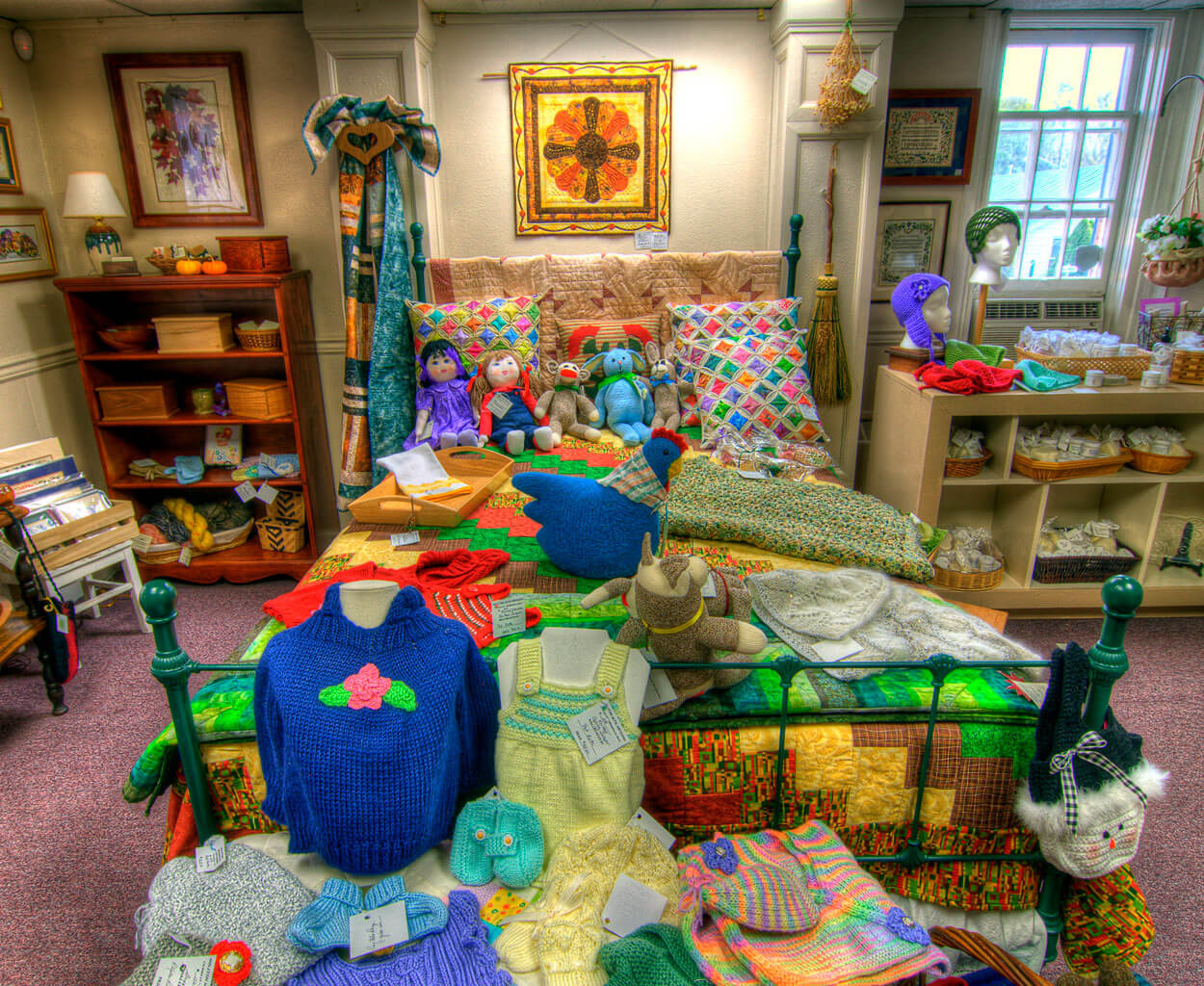 Don’t leave downtown Abingdon without stopping at this 19th-century freight station. Here, you can mingle with the resident studio artists, who produce works in media ranging from fiber and clay to watercolors and oils. With a mission to provide educational opportunities to the community, they’re happy to offer a demonstration of their crafts. 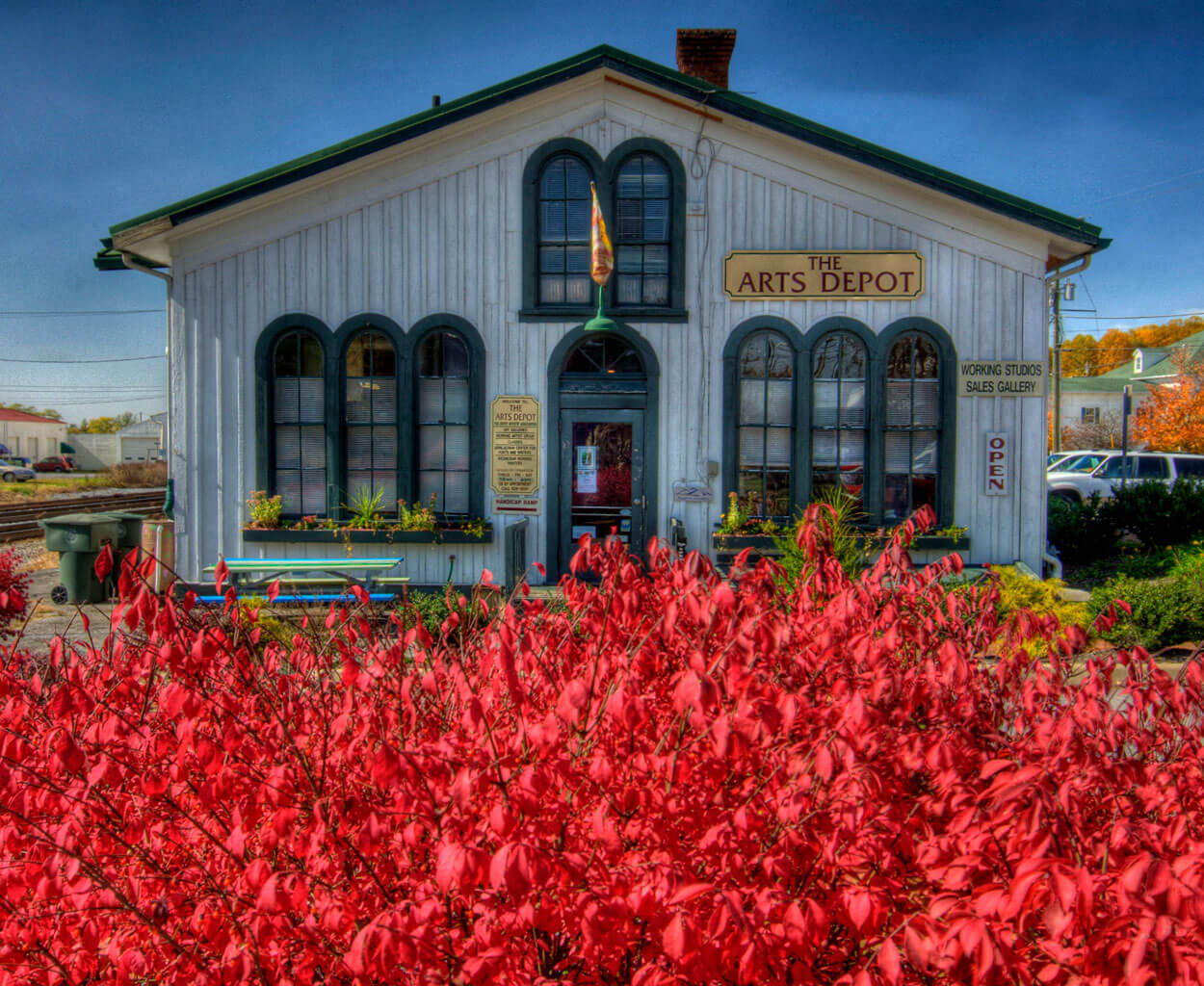 This art gallery is located inside a 19th-century freight station right by the train tracks. photograph by Jason Barnette

“It’s a place to get a taste of what the region has to offer,” says Jenna Wagner, the center’s PR and marketing director. “Our goal is to bring you in the front door here and push you out the back door into our communities.” On Thursday nights, upward of 175 musicians play live music throughout the facility’s galleries, on the “pickin’ porch,” and on the main stage. “Anybody can bring their instrument,” Wagner says. “Even if your voice is your instrument, you can join the jam sessions.”

When Barter Theatre opened in the 1930s, it created jobs for starving artists and entertainment for Abingdonians desperately in need of an escape during the Great Depression. If the farmers couldn’t sell their produce? No problem, says Kenny Davis, house manager and volunteer coordinator. “They could bring tomatoes from their garden and buy a laugh. Barter coined the phrase ‘ham for Hamlet,’” he adds. “They tied a pig to the front of the building to get attention, and it was a sold-out show!”

Today, people travel from around the globe catch a show at Barter’s main Gilliam Stage or across the street at the more intimate Barter Stage II. In fact, Davis says, Barter Theatre maintains its tradition of starting each show by recognizing the person who’s traveled the farthest. “We’ve seen people from every continent except Antarctica. What we have here is quite a gem.” 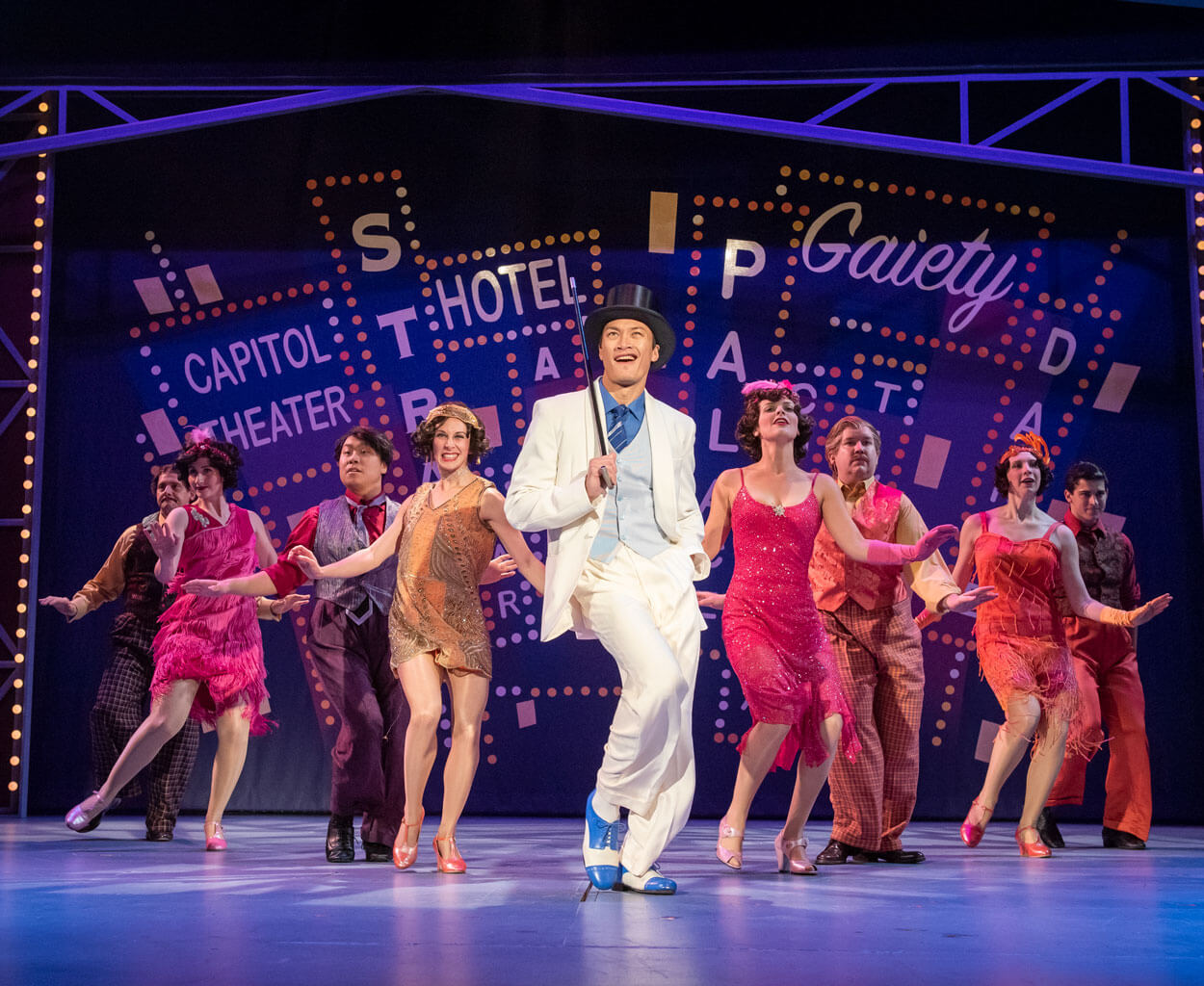 The cast of Singin’ in the Rain performs at Barter Theatre. photograph by barter theatre