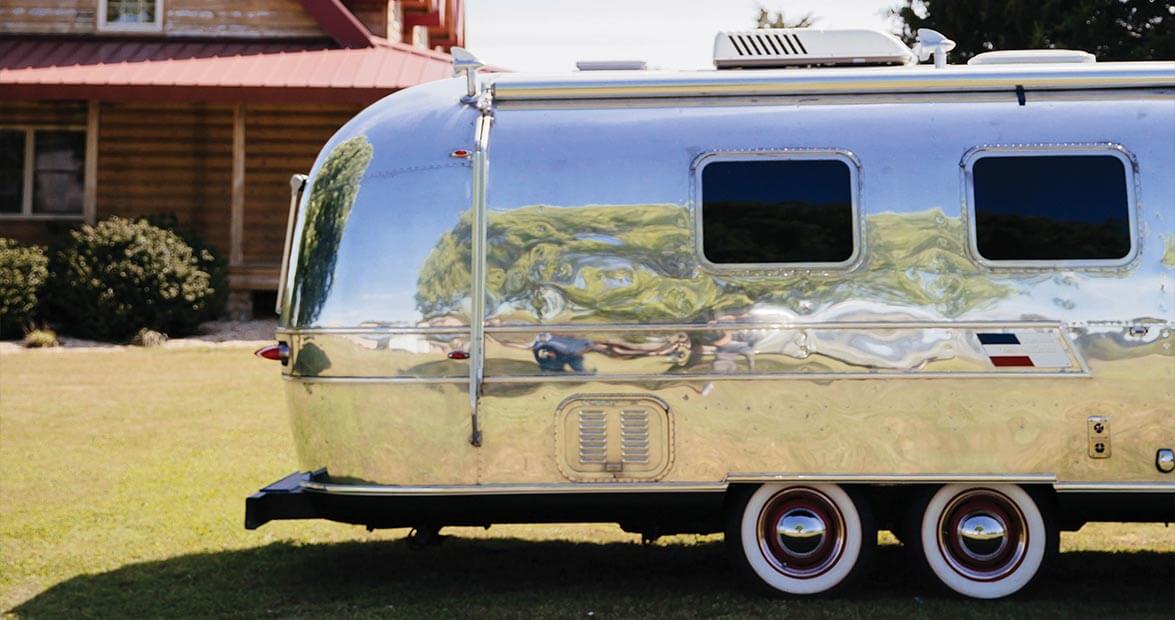 What is that riveted, rounded, shiny, silvery thing in the next lane?

No, it’s an Airstream. Wave at your reflection as you pass. Everyone else does.

What is it about an Airstream? The appeal of this “tow-ter” — not “motor” — home is vast, especially in the comeback mode of old school. Glimpsing one of these “happy shacks” reminds you that, like a restless high school grad, you always meant to take a year off and, by golly, hit the road and crisscross the country. For anyone who’s ever made a fort, or a tree house, or even a pillow-lined cave beneath a blanket-draped kitchen table, an Airstream inspires instant longing for that snug-as-a-bug-in-a-rug, ruler-of-all-I-survey sense of security. If you’re not attracted to free-wheeling travel, or intimate personal spaces, then maybe you have fond memories of spending the night on a train, or in a small Swiss hotel, and admiring the clever economy of layout, where nary an inch is wasted space. Or, as Benjamin Franklin noted, “A place for everything, and everything in its place.”

Then there’s always the just plain convenience of an Airstream. If you need, say, a place to stay in a dove field. Or at the U.S. Open. Or in your backyard. 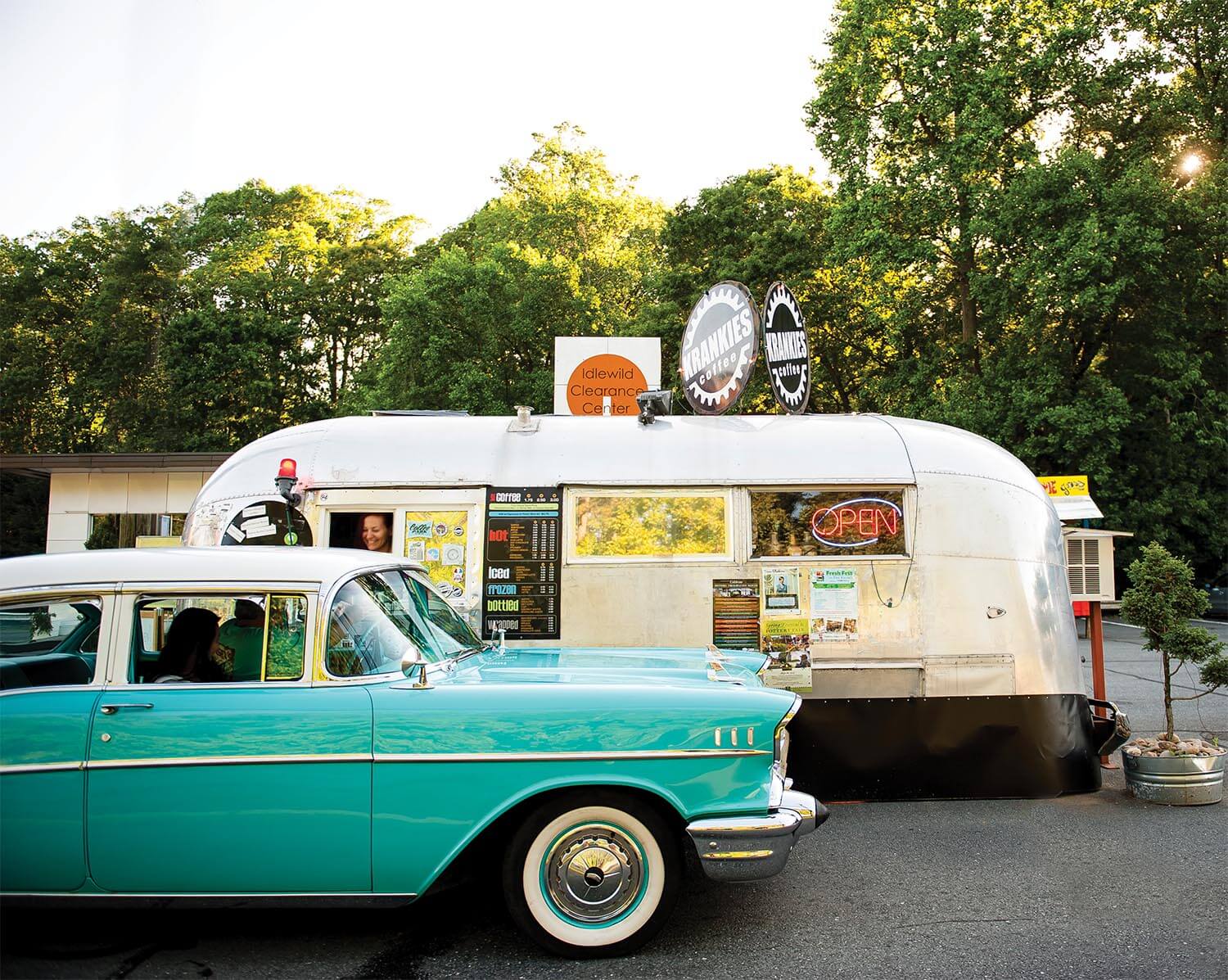 As an English-as-a-Second-Language teacher, Elizabeth Vickerman travelled frequently through Columbus County, near Riegelwood, and remembers spotting her Airstream-to-be like other people remember the day or place they got engaged, or landed a spectacular fish. “On Sam Potts Highway,” she says, with quiet but absolute recollection. “Whenever I drove by, I’d see this bit of silver through the trees, and as the leaves fell throughout the fall, more and more of it was exposed, and there it was, sitting in an open field.” “It” was a ’57 Airstream Pacer, 16 feet long.

Vickerman’s grandparents had left New York state 60 years earlier to roam the country in an Airstream, eventually landing in Florida, where they lived out their days — in their Airstream. “I’ve had a special place in my heart for Airstreams, because of them,” Vickerman says, and decided that, if she ever saw one, she’d buy it.

She left a phone number on a piece of hot pink paper taped to the lonely Airstream door, and finally, a full year later, someone contacted her. His accent was so thick that she initially thought the caller was a foreign student from one of her classes. But it was a Southern accent all right, from a hunter who was ready to sell. The lights still worked. The sink and fridge were original. So was the three-quarter bed. Little by little, she’s restoring it. Has she taken the cutie pie camping? No. Caravanning? No. Has she even taken it on the road? Nope. Then? “Sometimes I just go and sit in it,” Vickerman says.

Exactly. After all, there’s not much of a leap from self-contained to self-contented.

• • •
In 1931, a Californian named Wally Byam built the first Airstream, fulfilling a dream of creating a travel trailer that would “move like a stream of air,” lightweight enough to be towed by a car. The Torpedo Car Cruiser was the first model off the Culver City, California, factory line, and the prototype of every Airstream since. Unlike many — in 1937, 400 trailer manufacturers were competing against each other — Byam’s Airstream survived the Great Depression and World War II, and is, in fact, the only one on that list still in business today. Airstream aficionados know that each model’s name stems not from a marketing ploy, but from its length. The Bambi, Airstream’s poster child of cute, is 16 feet long. The Caravel comes in at 17, the Globe Trotter at 20, The Safari, 22. Vintage models are seven feet wide, though (fun fact) Europeans prefer slimmer Airstreams because — you guessed it — roads across the pond are narrower than ours.
• • •

“I like old-school,” Dan Matthews says. He and his wife, Lisa, are sitting at a decidedly old-school yellow-with-brown-crackles Formica table rimmed in silver that looks like something Wally and the Beav ate on. Nearby stands a Coke machine, red and rounded, from which, for a dime, you can still get an “ice cold” Coca-Cola. “Old things endure,” Dan says. Their Raleigh business, Capital City Customs, Inc., is one of only three in the country that can build or rebuild Airstreams from the ground up.

A cabinet filled with trophies attests to Dan’s 22 years in racing before he bought his first Airstream, a 27-foot-long Overlander of ’71 vintage — though hardly in vintage condition — on eBay in 2000, and rebuilt it. “That’s what you do in racing; building and rebuilding. I’ve always been a fabricator,” he says. He already owned the metalworking equipment, a facility, and, most of all, a perfectionism suited to Airstream’s superior qualities: “I like things to be right.” When a question arose, he took his problem to the service department at Out-of-Doors Mart in Colfax, which has been selling Airstreams longer than anywhere else on the planet. The service techs at Out-of-Doors Mart were mightily impressed with Dan’s work, and suggested he do it for a living. Dan ditched his dog-eat-dog, contract-competing, who-can-do-it-fastest-and-cheapest career as a grading contractor, to, well, make people happy.

You want a foot-wide shelf around the seating area so your cats the size of small dogs can watch the world go by? Dan can build that, and while he’s at it, remodel the hollow space in the armrests so the kitties can snuggle in their personal cubbyholes. You need a bed in your Bambi that lowers and rises and retracts and extends for your acupuncture clients? Dan can do that, too. You want taillights from a ’57 Cadillac, a dual stainless-steel sink, or black leather upholstery? Better call Dan.

“The pleasure of this business is the people and their stories,” he says. “They call day and night,” and have included a NASA jet propulsion engineer, an Episcopal priest, an electrical engineer who helped locate the Titanic, and an Ohio museum designer. “While he was redoing a Raleigh museum, I was redoing his Airstream,” Dan laughs, and recalls sheepishly illustrating his suggestions on lined notebook paper while the engineer presented his highly technical specs on a computer screen. (The notebook-paper drawings were adopted, by the way.)

He’s proudest, however, of designing a lift for a multiple sclerosis patient that allowed her to continue “glamping” — “glamour camping” — with her husband in their Airstream until two months before her death. His design — a true challenge given the trailer’s rounded exterior — has since been patented. That curved, raw-wood form in the middle of Dan’s hangar-sized facility isn’t a futuristic shoe shelf; that’s a “jig” to fabricate panels from airplane-quality aluminum.

Even with a lot full of silver, sausage-shaped Airstreams awaiting modification or customization, Dan is always on the lookout for another. Or someone is. “A garbage man keeps his eyes peeled on his rounds for me,” Dan confesses, and grins. 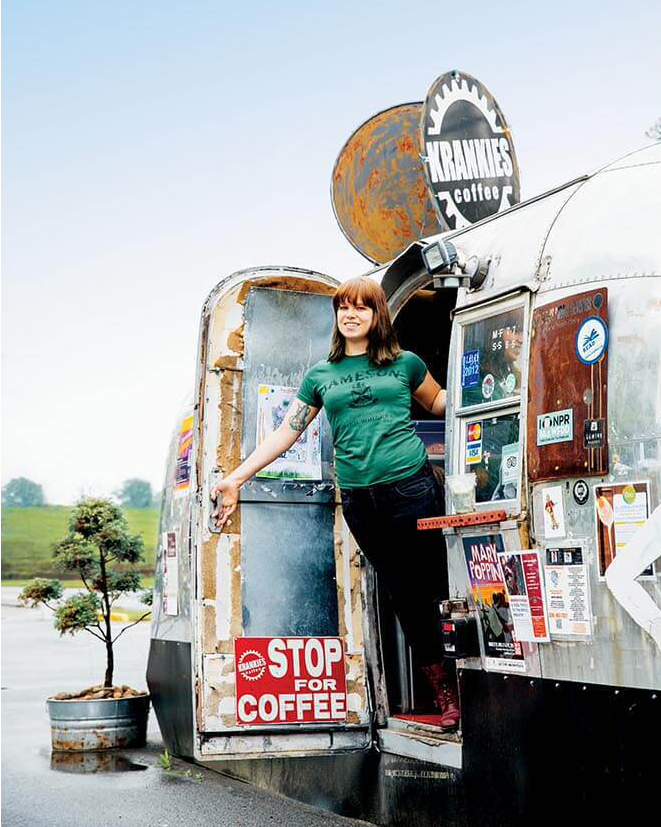 Ed Vernard is no garbage man. “He’s a junker,” says Tommy Priest, owner of Krankies coffee drive-thru in Winston-Salem. (Make that a junker with a very good eye, who once hauled away six Herman Miller chairs while the folks sitting beside them laughed at him; he later sold them for $600 each.) Vernard spied a decrepit Airstream — entirely blackened with pine tar drippings — sitting in front of a trailer on U.S. Highway 64 between Lexington and Asheboro. A note taped to the door of the trailer read, “Donny, please take your meds.” Vernard knocked. “Are you Donny?” he asked, handing over the note.

Indeed it was. Donny presumably took his meds, and eventually sold the 1958 Airstream Tradewind for $250. “It was basically a frame,” Priest says. Some 360 man-hours later, Krankies drive-thru, a sister business to the Winston-Salem establishment Krankies Coffee, opened in June 2007, in the parking lot of a defunct Texaco station.

Instead of classic “Petrified Forest” and “Florida Keys” decals, the familiar silver shape is plastered with signs and notices for 5Ks, cultural events, and decals of another ilk: skateboarder and biking logos. Inside, the walls and ceiling are covered in graffiti, the obligatory first-earned one-dollar bills, and hand-lettered signage (“Hey! Write your name down to get $$$.” “Handy dandy cheat sheet for noobs,” i.e., new hires). All the accoutrements of Krankies gourmet coffee — espresso machine, bottled syrups, and three dorm room-size fridges — fill the otherwise gutted interior. This Airstream is a very dude-ish establishment, and wildly popular: Laid-back and occasionally bearded baristas serve an average of 200 customers a day, from a very small space indeed.

The aroma wafting from its drive-up window and door — held open with a bungee cord — is heavenly, enticing. Even if this is an Airstream with its own street address and power pole. “It’s not going anywhere,” Priest says.

But the gleaming number parked in the lot of the old Daily Bread Flour mill in southeast Greensboro is going places. The 1966 Airstream Ambassador is an ambassador — an ambassador of marketing for Duck Head Apparel, whose headquarters and only retail store opened December 2014 in the refurbished mill. To reflect the lifestyle Duck Head embodies — think Orvis and Topsiders — the trailer’s interior boasts 150-year-old heart pine flooring, a barn door, wrought-iron hardware, and cabinets made with 50-year-old sawmill wood that was dry-stacked for decades. Add club chairs and archival items such as a U.S. flag, a World War II calendar, and an antique map of North Carolina, and all you need to complete the Duck Head environment is, well, the old-school clothing stacked on the glass-fronted shelving.

Rustic and sleek, this mobile, tangible reflection of the brand has traveled from Oxford, Mississippi, to Chapel Hill, to New York. And as a recently minted — and covetous — Airstream convert, I admire its sought-after 13, rather than more standard seven, panels, and its “baby moons,” the must-have convex mirrored hubcaps, a mark of Airstream bling and authenticity that every true fan requires, along with the bright red “beauty rings” on the whitewalls.

Spouting stats: what happens when you become smitten and starry-eyed.

Vintage Airstream enthusiasts are no wink-wink clique or snobby cadre. They join organizations that “rally,” or get together for the sheer fun of it, and “caravan” — plan and drive itineraries all over the continent. A friend once came over a highway rise to discover a sea of silver Airstreams congregated below, and describes the sighting as something like a religious experience. The vision is easily imaginable: gleaming humps as far as the eye can see, a Woodstock of trailers, a field of metallic mushrooms, an invasion of aliens.

What is it about an Airstream? The beloved brand suits minimalists, entrepreneurs, adventurers. Introverts, party people, perfectionists, and sentimentalists. All have found a home — temporary or permanent — and happiness in that rounded, mercury-colored capsule. Gussied up for going off the grid, or stripped down for hunting, its appeal is irresistible and far-ranging. Futuristic yet throwback, sleek yet homespun, a vintage Airstream satisfies multiple penchants and personalities.

How does a tin can trailer earn retro status? Quality leads to longevity, sure. But never underestimate cuteness.