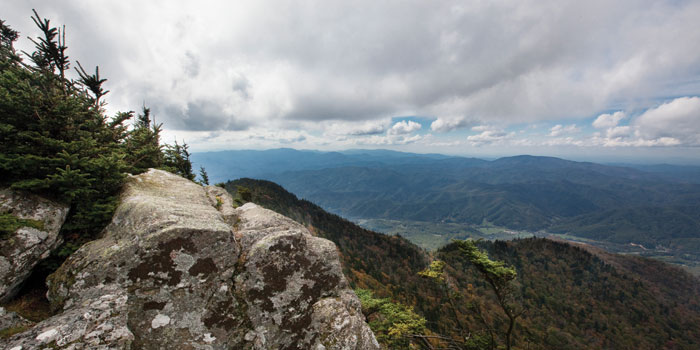 Editor’s Note: This story was first published in January 2012.

I was young and eager to impress. She was beautiful — a curly headed blonde, quiet and strong. I wanted to take her somewhere magical, a place where we would be a part of something bigger than ourselves. I chose Big Bald on the Appalachian Trail. Halfway into our journey, I began to doubt my decision. We labored up the trail from Sam’s Gap, hearts pounding, backpacks digging into our shoulders. Who would do this to a woman he barely knew? Then, we broke out onto the bald. The trail led up through a giant meadow, the land falling away on all sides. We pitched our tent on the eastern edge, where we could watch the sun rise from below.

For two days, we lay in the grass, immersed in silence, bathed in summer breezes. We spoke in whispers — Look at the deer … Feel this moss. The mountains in the distance loomed as layers of blue-gray, and at night, became one with the blackness below. We felt in those hours blissfully unmoored, closer to the stars than the land. When we came down off the trail, we felt changed, blessed. We had been to the mountaintop.

The Appalachian Trail is not your usual natural attraction. For one, it is more than 2,000 miles long, crossing 14 states from Maine to Georgia. The North Carolina portion is nearly 300 miles long, strung across some of the most inaccessible countryside in the state. And it was born, in a sense, out of heartache.

At the end of World War I, inflation wracked the nation, and labor unrest rattled the cities. Logging companies stripped the Appalachians of most of its timber, and erosion ran rampant. Benton MacKaye, a midlevel U.S. Forest Service employee, believed that something must be done to simultaneously restore this blighted region and provide East Coast residents with a retreat from urban life. In 1921, while grieving the suicide of his wife, he published an article calling for the establishment of a trail that would run along the crests of the Appalachians.

The year after Cathy and I hiked the AT, we married. A few years after that, she developed a medical condition that ended her hiking days. I lived the AT through other people’s eyes, through books like Bill Bryson’s A Walk in the Woods, and postings on the Internet. I clung to the belief that I could go back on the trail anytime I wanted, that it would always be there as I remembered it.

But the talk of development and the decline of the forests and the beloved balds disturbed me. All of a sudden, I turned 60. Not only could I forsee the end of my own hiking days, but also the wilderness through which the AT passes. I called my friend Jay Leutze to lead me back to the trail, to a section I’d never seen.

Leutze lives halfway up the side of Avery County’s Big Yellow Mountain, just a short hike from the AT. As children, Jay and his siblings climbed the mountain and offered bananas to hikers passing through on the trail. Now, he’s a board member of the Southern Appalachian Highlands Conservancy (SAHC), an Asheville-based land trust whose mission is to preserve the pristine environs through which the trail runs.

In North Carolina, most of the AT passes through the Great Smoky Mountains National Park, and the Pisgah and Nantahala National Forests. So it is protected for some distance on both sides. However, in some places, the corridor is only as wide as the footpath itself, and the trail is exposed to activities like logging, mining, road building, and development. Leutze and other conservation groups negotiate with landowners to limit such activities.

As we neared the top of Big Yellow Mountain, we broke out onto a bald. Cattle grazed in the distance, but no fences were in sight. After many years, I had that giddy feeling of being on top of the world.

Balds are one of the natural wonders of the southern Appalachians. Most of the range’s peaks are covered in trees, but some are open, carpeted in grass or shrubs. No one is sure what caused these openings — fire, farmers grazing their cattle, or prehistoric grazers like the woolly mammoth. Hikers love them because they afford 360-degree views. Botanists value them for their ecology.

Near the top of the mountain, Leutze kneeled and parted the grass to reveal a waxy leaved plant like a wild strawberry. “It’s a three-toothed cinquefoil,” he said. “There are about a half-dozen plants on these balds that are remnants of the ice ages. Some have been isolated for so long up here that they have become distinctive subspecies.”

When the U.S. Forest Service took ownership of certain balds in the 1970s and ’80s, they asked the former owners to remove their cattle. To the forest service’s dismay, blackberry bushes and woody vegetation began to crowd out the grasses. The balds began to disappear. Now, the forest service encourages farmers to graze cattle; where grazing is no longer possible, they mow or clear the balds by hand.

On the far side of Big Yellow, we intersected the Appalachian Trail from Little Hump Mountain. The AT here is just a narrow path, barely wide enough to place one foot in front of the other. Its length and the splendor of its surroundings make it memorable.

At the base of a gap, we reached an old, red cattle barn converted to a shelter for hikers. In a corner of the shelter, I found a notebook with entries by “thru-hikers” — people trekking the entire length of the AT, or a significant portion of it. Many spoke of the joy of reaching this shelter after days of wind and rain.

“Those thru-hikers are really a breed apart,” I said.

Leutze nodded. “You can spot them coming down the trail. They’ve got that lean, hungry look. Physically and mentally, you become a different person the longer you walk. Some of these people hike 12 to 16 miles a day.”

From the Overmountain Shelter, we hiked over Grassy Ridge, Jane Bald, and Round Bald headed for Roan High Bluff, elevation 5,800 feet. We crossed N.C. Highway 261 at Carver’s Gap and began our climb through the magical world of the spruce-fir forest. On most of the high-elevation peaks, the spruce-fir forests are dying, victims of an insect called the woolly adelgid. But here on the Roan, they thrive.

We took a spur called the Cloudland Trail, tunneled upward through beds of rhododendrons, and emerged at the wooden platform atop Roan High Bluff. I stared into the misty valley, down the rugged spine of the earth. Somewhere in the distance lay Big Bald and a grassy meadow that once entranced a long-haired boy and his blue-eyed girl. I wish I could have gone back, but it was enough to know that the bald is still there and the trail runs through it, watched over by people who care.

John Manuel is the author of The Natural Traveler along North Carolina’s Coast. This is his first story for Our State.