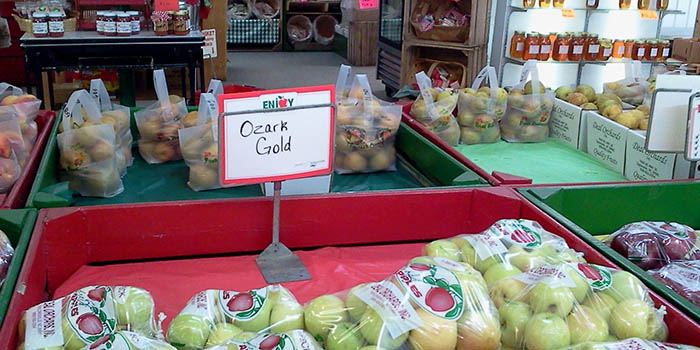 When my sister and I were growing up, our parents took us to farms, orchards, farmers markets, and roadside stands to buy produce. This was before knowing where your food came from was popular, and before the rise of agritourism. As an adult, I began searching for my own favorites to visit.

On a recent Friday in September, I set out for an apple orchard I like, Deal Orchards in Taylorsville. One-way, it’s about an 80-mile trip from my home in Charlotte.

Their market offered Gala, Ozark Gold, and Red Delicious apples on this day. I selected a bag of Ozark Gold apples and a bottle of tangy-sweet Nature’s Pearl muscadine juice.

Across the highway at Sugarloaf Orchards, I chose a bag of Ginger Gold apples from the store before heading back to Charlotte. My husband also got an inexpensive box of more than 100 red “deer apples” there. Too small and bruised for eating or cooking, they were perfect for the wildlife that feed in our backyard.

Earlier in the week, I’d spoken by phone with several apple growers, including Lindsay Deal of Deal Orchards, a third-generation farm in the shadow of the Brushy Mountains. His dad planted the first apple trees there in 1939, he says. His son, Alan, helps with the apple operation now.

Deal says he’s “never met an apple I didn’t like.” His favorite apple dish is “apple pie, made by my wife,” he declares. She uses Golden Delicious or Stayman Winesap apples for the pie.

Up at Justus Orchard in Hendersonville, Don Justus was busy with a tour group, so I called back a little later. He says he’s the fourth generation of his family to grow apples in that area of Henderson County.

His favorite variety of apple is the Ambrosia, which he says has a unique taste. He says one of his customers has been returning for it for eight years and described it to him as “an apple pie growing on a tree.”

At Sky Top Orchard in Flat Rock, David and Lindsey Butler grow 30 varieties of apples. As with ice cream, David says, in apples “taste is a very sensitive and hard-to-describe thing.”

Lindsey favors the Goldrush apple. It looks as though it’s been “dipped in gold dust,” she says. Her preferred way to eat apples is anything sweet: cake, pie, or cooked apples.

North Carolina ranks seventh in the country for apple production, according to a brochure from the N.C. Department of Agriculture & Consumer Services.

My paternal grandfather always swore Limbertwig apples were best, recommending them over any other.

My maternal grandmother baked grated apple pies for years with a recipe she probably saved from the newspaper. All this talk of apples brought back memories.

Check out some of North Carolina’s apple orchards. Some offer pick-your-own apples in addition to pre-picked. Look for apple-ripening schedules on many websites. Always call for hours and availability before heading out.

Don’t see your favorite orchard listed? Mention it in our comments section below.

Melt butter, add sugar, and stir. Add egg, apples, and spices. (If using store-bought frozen crust, you can let it thaw while preparing the filling.)

Bake in unbaked crust at 350 degrees for about 45 minutes.

If apples are very juicy, you may want to drain some liquid after you grate them so the pie won’t be runny. You may also need to increase length of bake time.

Serve with whipped cream or ice cream, if desired.