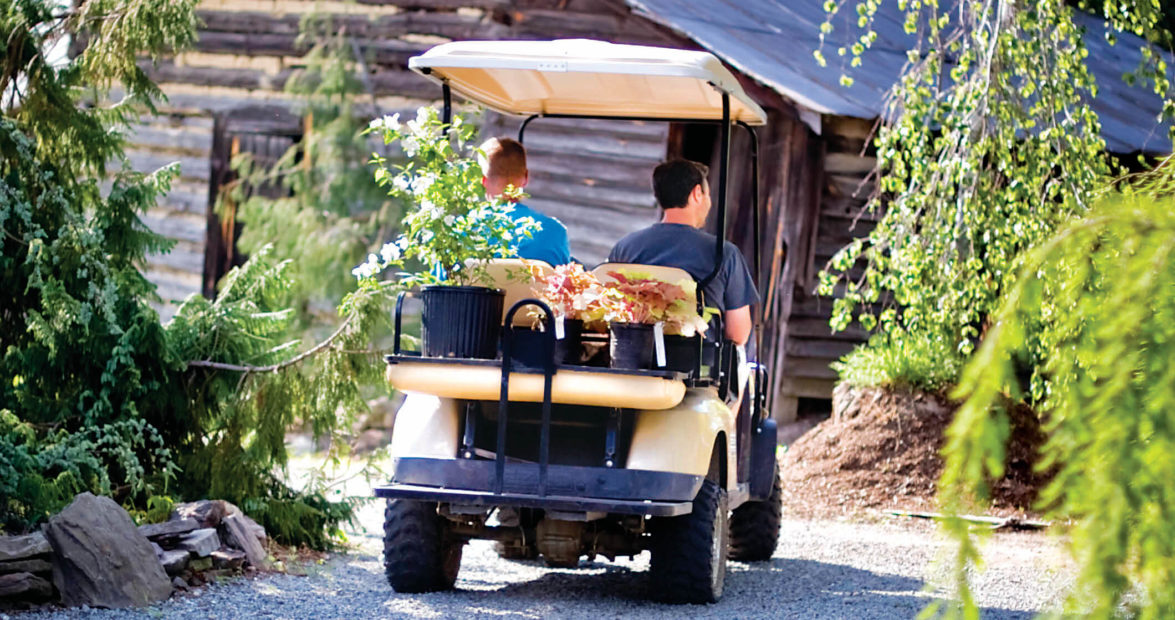 When he was a kid, 8 years old even, John Monroe drew trees. Not the puffy-topped trees typical third graders might draw, but detailed sketches of balled and burlapped trees with price tags hanging down. Some people know what they’ll be when they grow up.

“I always wanted to own a nursery,” he says.

From those dreams and simple drawings came the reality of Architectural Trees, a nursery that Monroe now owns. Located in Bahama, just north of Durham, this nursery is considered a prime place to find distinctive and unusual plants, and large, mature specimens that can add instant appeal to any landscape scheme.

It wasn’t a straight shot from elementary doodles to nursery owner. Monroe grew up in suburban Chatham Township, New Jersey, and attended a private secondary school that emphasized preparing for college and a professional, white-collar career. He earned an undergraduate degree from the University of Michigan and then moved on to the University of Detroit, where he received a doctorate in clinical psychology. Monroe then moved to Bahama and, within five years, had established a profitable private practice.

Despite his success, Monroe felt something was missing. Like a good psychologist, he turned to his inner child for the answer, and he remembered the many joyful times. His grandfather, a Lithuanian immigrant, bought a 100-acre farm in New Jersey after a career working in the Pennsylvania coal mines. “I loved visiting the farm,” Monroe remembers. “I believe my passion for plants originated from my love of my grandfather, because growing up in suburban New Jersey, there wasn’t much support for becoming a farmer or nurseryman.”

Monroe’s passion persisted. By the time he was 12, Monroe had his own weeping conifer collection. And then there was the mail-order forest. “Once, when I was about 15, I ordered 2,000 trees from the New York State Conservation Department,” Monroe says. “My family’s three-quarter-acre lot looked like a tree farm. How my parents let me do this still remains a mystery in my mind.”

When he moved to Bahama, he bought the decaying farmstead of an old tobacco farm, the former Betsy and Amed Tilley farm, a historic-looking property with chinked tobacco barns. The home’s connection to the land sparked Monroe’s imagination, and rekindled his childhood flame for plants. Soon, he began attending evening lectures at North Carolina State University, where he eventually met J.C. Raulston, the renowned horticulture professor for whom the J.C. Raulston Arboretum is now named.

“I went on three tours led by J.C. and met nurserymen, graduate students, avid gardeners, and other assorted plant nuts,” he says. “What I discovered was that I felt incredibly happy on these tours, and the first seeds of actually changing my career were planted in conversations with nurserymen.”

Raulston’s death in an automobile accident in 1996 made Monroe take stock of his own life and dreams unfulfilled. In 1997, he resolved to split time between developing a nursery and continuing his psychology practice. This arrangement lasted seven years, and then Monroe completely gave in and started Architectural Trees.

Today, walking among his trees, he discusses genus, species, and cultivar names with the comfort and conviction of a lifelong plantsman — which, in essence, he always has been.

Monroe has transformed the Tilleys’ tobacco farm into a nursery that specializes in the special — weeping, contorted, variegated, columnar, hard-to-find, and unusual plants. Of the 38 acres on the property, about five are used for the nursery. Many of the outbuildings are still sturdy structurally and have been transformed into potting sheds, holding areas, and office space.

Because Monroe propagates and grows a lot of his beauties, he will sell no plant before its time. This means small twigs in one-gallon containers are a rare sight at Architectural Trees. Monroe prefers to offer plants well on their way to maturity, so three-gallon, 10-gallon, 20-gallon, and upwards to 75-gallon containers are the norm. For Monroe, it’s just practical. “I find that when a plant is a little older, the customer’s success is significantly greater,” he says.

His impressive inventory is a “who’s who” of desirable trees, shrubs, and perennials. Remaining loyal to an old favorite from his younger days, he makes sure his nursery always brims with quality conifer selections. In addition, the phrases “specimen trees” and “Japanese maples” are often used in the same breath, and judging by the incredible variety of different species and cultivars in his inventory, Monroe is quite aware of the importance of these beauties to a garden.