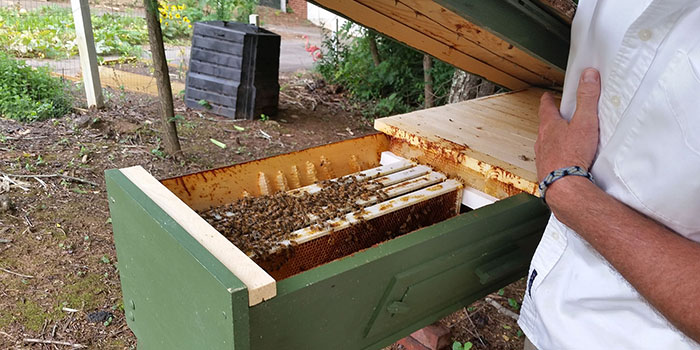 Asheville’s abundant green space, four-season climate, and extraordinary food scene have made it a mecca for those who enjoy the good life. It was only a matter of time that its welcoming buzz would attract a new breed of resident: hundreds of thousands of honey- producing bees.

Thanks to a progressive culture that’s hospitable to beekeepers, Asheville earned its stripes as the first official Bee City USA in June 2012. The distinction is determined by the nonprofit Center for Honeybee Research, which sets high standards of accountability.

“People in Asheville are crusaders, and you’ve got to have that spirit to keep bees,” says Phyllis Stiles, Bee City USA Director. “It takes a lot of commitment and passion, and it can be an expensive hobby. But if you get a good teacher, it can be one of the most exciting things you’ll ever do.”

Modeled after a similar program that focuses on protecting trees in urban areas, Bee City USA promotes measures that benefit native bees, such as the pollen-filled gardens that have been planted on the UNC-Asheville campus, as well as parks, businesses, and private homes. “It’s all about sex,” Stiles quips. “Those flowers are desperate for pollinators, and we’ve got more bees than anywhere else in North Carolina. It’s a very rare and special place.”

Carl Chesick, Director of the Center for Honeybee Research, fields inquiries all the time from locals interested in raising bees, as well as people across the country seeking a place to relocate their hives. “We have more beekeepers per capita than any other state, and more in and around Asheville than anywhere else,” Chesick says. “Part of it is that we are blessed with the perfect environment. Money grows on our trees.” In fact, Carrboro became the state’s second Bee City USA community on Oct. 7.

Starting with the red maple, whose early spring blooms rouse bees from their winter slumber, the season extends with black locusts, tulip poplar, and sourwood. While forests and flowers provide protein-rich nectar, which bees convert to honeys with distinct flavor profiles, Chesick has observed a growing trend among bee enthusiasts who do not sell honey or collect more than a jarful for personal use.

“Since 2000, people have been more aware of the need to help bees for pollination. They keep bees just to do their part,” says Chesick, one of several area advocates who leads beekeeping classes throughout the year. “People are doing what they can to replace bees, but there’s always about 30 percent loss every year. Even in Asheville, we’re getting pretty close to the point that we couldn’t make it up if we had a big disaster, like a weather event.”

The risk only serves to motivate dedicated beekeepers. Just weeks from his 80th birthday, Edd Buchanan of Black Mountain remains as fascinated by bees today as when his father taught him how to care for the family’s hives when he was a boy.

“When you learn the integral happenings of what goes on inside a beehive, it will blow your mind,” Buchanan says. “You have to stand back and say, ‘Hey, there had to be a creator to make that thing.’”

Buchanan is a fourth-generation beekeeper but the first in his line to run a pollination business. “That’s an industry a lot of people don’t think about,” says the Master Beekeeper and former president of the State Beekeepers Association. “You’ve got to have bees when you farm. It’s a must.” 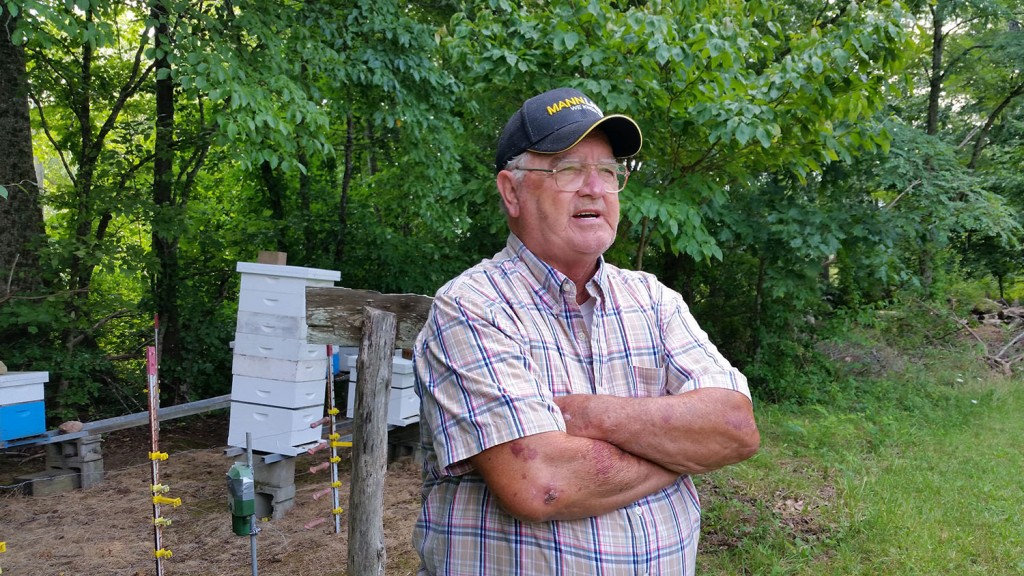 He started leasing hives to pollinate crops back in 1986, when he retired. Today, Buchanan drives a truck with EATHONEY plates to check daily on 150 hives scattered across six counties and leased to dozens of farms. If you buy a local pumpkin, there’s a good chance one of his bees kissed it.

The pollinating business is hard work. An established colony can weigh 200 pounds. Hives are shrouded with wraps after dusk, when bees settle in for the night, and moved with care to a trailer for pre-dawn transportation to orchards and farms.

“In the morning, they’ll come out and do a couple of circles to orient themselves, so they can come back,” he explains. “Can you imagine finding a single tree up on a mountain without any electronic device? They do it all the time.”

Wild Mountain Bees is the go-to resource in Asheville for novice and experienced beekeepers. “We do our best to get people set up right so they’ll be successful, lifelong beekeepers,” says owner Jon Christie, who keeps most of his hives in nearby Madison County, which is thick with sourwood trees. “Asheville attracts people who are environmentally aware and into self-sufficiency. Beekeeping is a natural fit.” 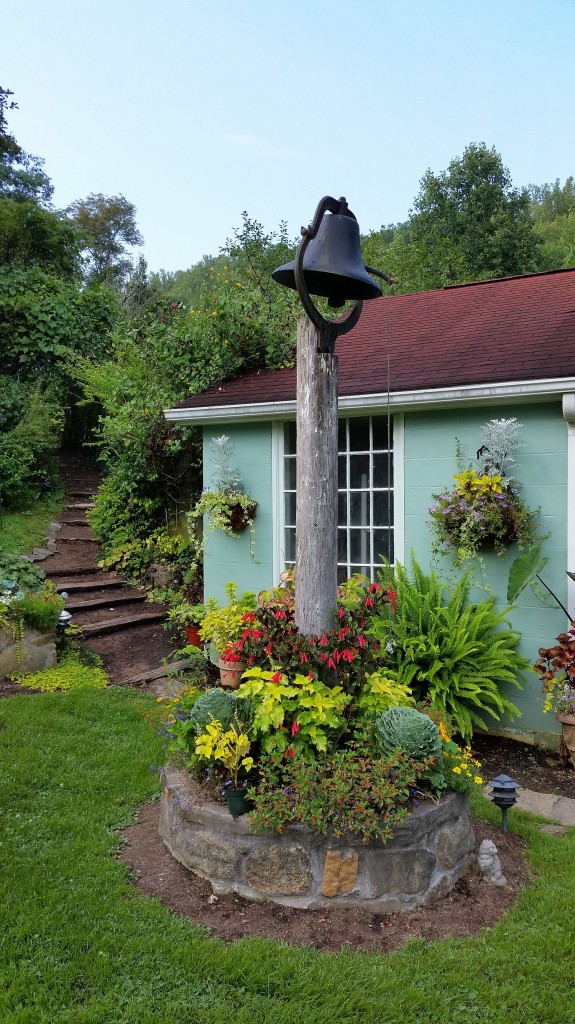 Eve Davis appreciates the good karma bees bring to her life. “We consider bees sacred and are honored to have them in our lives,” says Davis, who runs the Hawk & Ivy Inn in nearby Barnardsville with her husband, James. They have several hives situated near a pond on their hikeable, flower-filled grounds. “Their plight is evidence of negative things happening to our planet. It’s essential that we all do what we can to help.”

Bees and bee supplies can be ordered online, but Carl Chesick says most beekeepers prefer to build a bond with their supplier. “It can be hard when you first start, and you really need a mentor,” says Chesick, who, like Christie and Buchanan, have helped countless locals become avid bee whisperers.

Christie’s shop has several honeycomb-like rooms stocked with a vast assortment of wearable safety gear, basic to high-end hive kits, and bee food and treatments. Typical startup costs for a pair of hives and nucs (colonies with the queen bee) are around $700. Successful colonies can be split among more hives in subsequent years to expand operations.

While a 2009 Asheville ordinance requires beekeepers to register with the city, Christie reckons that few do. “I’ve got 2,000 people in my database who have at least two colonies, but some people have 100 or more,” he says. “And that can’t be even 20 percent of the people who keep bees in Asheville.”

Despite the surge in bee population, it appears that few people suffer serious affects from stings. It’s among the least common concerns treated at Mission Hospital’s emergency room.

“I get stung all the time but it’s never bothered me,” says Edd Buchanan, who casually plucks a previously unnoticed stinger from a finger. “I am certified to administer an EpiPen if someone gets sick, but I’ve never had to use it.”

Billy Sanders is the co-owner of Reynolds Mansion, one of Asheville’s premier inns. He provides guests with a sumptuous breakfast sweetened with honey created by some 20,000 bees in nine hives located near the kitchen garden.

“Don’t worry. I’m a bee charmer,” he says while opening a hive to reveal glistening honeycombs and a vibrating wall of bees, some of which cling to his bare hands. “I really do love them, and they know it. I’ve never once been stung.”

A taste of honey

Laurey Masterton was one of Asheville’s beekeeping pioneers. The owner of Laurey’s Café on Biltmore Avenue mentored many people who wanted to collect honey or support the at-risk honeybee population by establishing hives. During her cancer treatment, Masterton wore a black and yellow knit cap that looked like a beehive embellished with little golden bee charms.

Masterton, who died in February, left a literary legacy in The Fresh Honey Cookbook, which highlights different varietals of honey each month while describing the busy life cycle of bees. It has 84 recipes, including some favorites from her café, which is now operated by former employees Emily and Adam Thome. They continue to feature several of her signature dishes, including the irresistible sweet and salty kale chips, sweet potato salad (made with local sourwood honey), and savory pork loin with orange honey mustard.

Executive Chef Katie Button also uses local honey on her menus at Cúrate, a Spanish tapas bar, and Nightbell. A semi-finalist for the James Beard Rising Star Chef award for three consecutive years, Button gets her honey from Jon Christie.

“I love his honey because it’s not cloyingly sweet,” Button says while offering Nightbell’s popular hush puppies served with a rich, sigh-inducing orange and honey beurre blanc dipping sauce. “He brings it to us in jugs. Between the two restaurants, we go through about 50 gallons each month.”

Christie’s honey is used in two prominent dishes at Cúrate. In berenjenas la taberna, it is drizzled over tender rounds of lightly battered and fried eggplant dusted with rosemary. Miel y mató features a sorbet of roasted strawberries, watermelon, and cava, which is topped with minted goat cheese “snow” and honey.

Flight of the honey bee 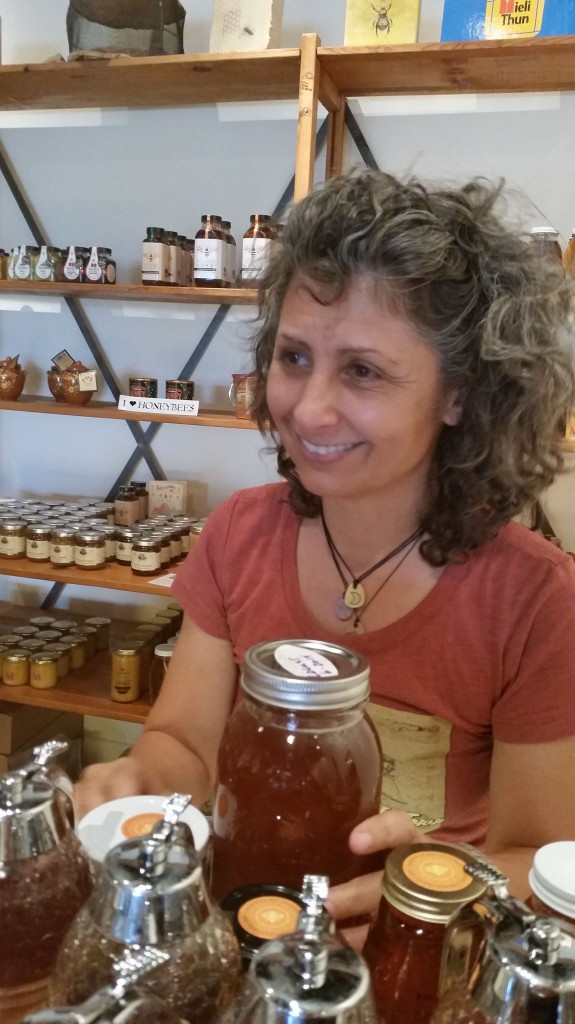 The business grew organically, Kelly says, from her discovery a decade ago that certain foods affected her well-being. She first eliminated gluten and dairy from her diet, later substituting raw honey for processed white sugar. Friends aware of her improved health started bringing her honey when they travelled, as well as bee-inspired clothing and home décor.

“One day a friend said, ‘You’ve got so much honey, you could open a store,’” Kelly says. “It never occurred to me, but we love Asheville and felt so welcomed by the local bee community.”

“People who buy local honey are helping a worthwhile cause,” adds Allen, who is working with Carl Chesick to install cameras inside new hives for a live feed into their stores. “Every time you buy a jar, you support the farmers who tend to the hives. You make sure that food is on the table in Asheville.”

Bee Charmer sells dozens of varieties of honey from around the globe, including many from western North Carolina. Eager to introduce more people to its health benefits, they feature a tasting bar where consumers experience a flight of honeys – much in the way you might sip wines or beer, going from light flavors to more robust ones.

A recent tasting included flavors ranging from Franklin County black locust, which recalls rum raisin ice cream with a licorice finish; deeply floral French lavender, which is so popular they struggle to keep it in stock; buckwheat, whose chocolate notes and thick consistency make it perfect for pancakes; and dandelion, whose funky aroma makes it the “stinky cheese” of the honey world.

“Conversations happen here at the bar that connect people in a way we never dreamed would happen,” says Kelly, noting the shop will host the Nov. 12 judging event for the third annual Black Jar Honey contest sponsored by Asheville’s Center for Honeybee Research. “It provokes strong memories for people, and it makes them happy.”