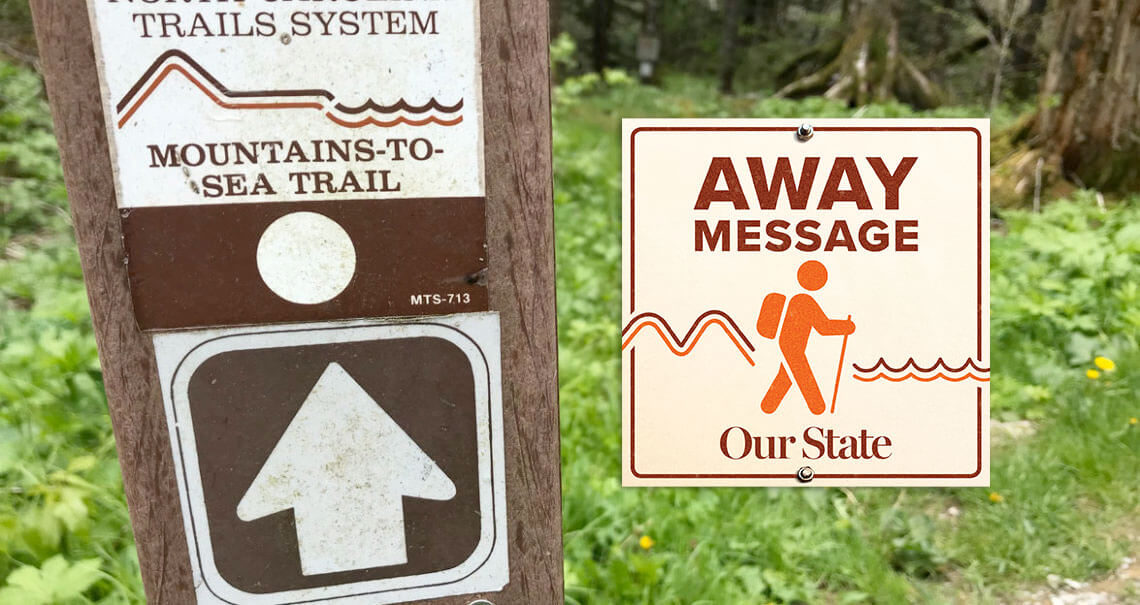 To keep up on Season 4 of Away Message, subscribe on:

Almost all of us have been indoors a lot more than normal over the past few months.

But imagine spending almost all of your time outdoors. Not just a lot of your time — nearly every minute of your day, outside. In sunshine and rain. On warm days and cold nights. For weeks at a time.

Welcome to the life of a thru-hiker on the Mountains-to-Sea Trail.

I wanted to experience it, but I couldn’t take off the two months I would need to hike 1,175 miles from the Tennessee border to the Outer Banks. So I did the next best thing: I found several people who were making the trip, gave them recorders, met up with them as they crossed North Carolina, and amassed hours of sound.

The result is Season 4 of our podcast, Away Message. It’s about more than hiking. It’s about a veteran decompressing after leaving a war zone. It’s about newlyweds whose relationship is fast-forwarded by a hike that puts them in close proximity for 24 hours a day. It’s about small towns that are rediscovering their potential. It’s about an accident that led to something great. And it’s about what you see when you slow down and experience North Carolina at low speed.

Episode 8: Climbing Down from the Dune

In the season finale, our hikers reach the Outer Banks of North Carolina and end of the Mountains-to-Sea Trail. Now, more than a year later, we see where they’ve ended up and how the trip has affected their lives.

As our Mountains-to-Sea Trail thru-hikers approach the end, one final challenge remains: A kayak trip down two of North Carolina’s most well-known waterways. All will have to grapple with problems that could potentially stop them from reaching their final destination.

Bonus: How to Hike, with Jennifer Pharr Davis

In this bonus episode, host Jeremy Markovich talks with long-time hiking guide Jennifer Pharr Davis about how anyone can prepare for and pull off a trip on a trail, from day-trippers to thru-hikers on North Carolina’s Mountains-to-Sea Trail.

Episode 6: A Trail Town Without a Trail

In this episode, we travel to Roseboro, a small eastern North Carolina town that sits on the route of the Mountains-to-Sea Trail but doesn’t actually have any good places to hike. Yet. We also meet the trail angels that hikers depend on to get to the end, and talk to a woman who’s attempting to finish the MST in just 30 days.

As Erin Brennan and Aaron and Lexi Harris pass the halfway point on the Mountains-to-Sea Trail, the path undergoes a dramatic shift from footpath to roadside. In this episode, we take a closer look at the parts of the MST that only attract the most intrepid hikers, and discover what it takes to bike and hike your way through a world built for cars.

When it comes to trail towns along the Mountains-to-Sea Trail, Elkin stands out. So how did a quiet place in the North Carolina foothills go trail crazy? We find out, thanks to the men who are building footpaths as fast as they can.

What’s it like to be with the one you love 24 hours a day, 7 days a week? In this episode, host Jeremy Markovich meets Aaron and Lexi Harris, a pair of newlyweds who experienced the highs and lows of hiking the Mountains-to-Sea Trail across western North Carolina.

Episode 2: The Warriors on the Trail

On the first day of her trip across North Carolina on the Mountains-to-Sea Trail, veteran Erin Brennan is making sense of new gear, new routines, and a new beginning with the help of Warrior Expeditions, a group that treats hiking like therapy.

The new season begins with some fairly basic questions. What is the Mountains-to-Sea Trail? How was it created? Who were the first people to hike the whole thing? And who would hike all 1,175 miles of it today? In this premiere episode, host Jeremy Markovich talks to the man who (accidentally) created it, as well as a llama wrangler who ended up doing something no one else had done before. We also meet several hikers, who are about to set out on their own journeys across the entire state of North Carolina: by foot, by bike, and by kayak.

A Preview of Season 4

In the latest season of Our State‘s award-winning podcast, we take a trip down North Carolina’s Mountains-to-Sea Trail. All 1,175 miles of it.