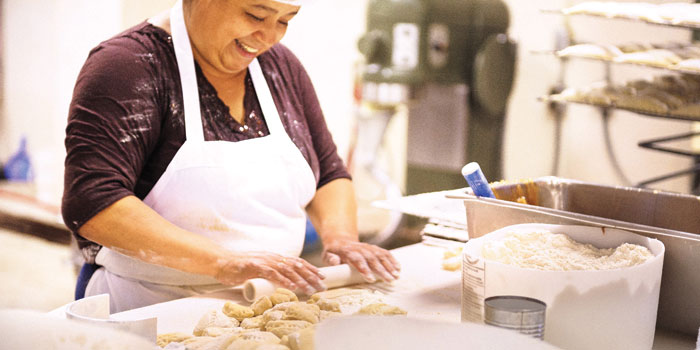 Apple, peach, lemon, cherry, chocolate. The flavors haven’t changed in more than 50 years. And neither has the recipe.

G.M. Griffin developed this recipe for fried pies decades ago with his cousin, Alton Bodenheimer. They started B&G Pies in 1949 on their back porch and then moved to a bakery on Winston-Salem’s South Marshall Street. Their pies gained popularity among shift workers who brought them in lunch boxes or purchased them from vending machines. They enjoyed them with an RC Cola on their breaks at textile mills and manufacturing plants.

Today, B&G workers still roll, fill, crimp, and fry each pie by hand. The only machine in the building applies the wax paper wrapper.

People remember that wrapper. Customers call B&G’s current owners, Chris and Shannon Wilson, all the time and tell them how exciting it is to rediscover a treat from their childhood. The Wilsons, who both grew up in Winston-Salem, became familiar with B&G Pies at an early age. They bought the business to preserve the iconic, local brand.

They hope to introduce B&G Pies to a new generation, the same way parents pass the pies on to their children. The couple works hard to make sure customers can find the pies in convenience stores, vending machines, and local restaurants. As demand spreads outside the state, the Wilsons ship pies to New England and the Midwest.

But there’s nothing quite like finding those pies in their home state, up at the register at the end of a barbecue dinner, or at a gas station in the middle of a long car trip. Choose a flavor (apple is by far the most popular), rip open the package, share it with a friend, and remember that this treat comes with some history.

For more information about where to find B&G Pies, visit bgpies.com.

Katie Saintsing is the editorial assistant at Our State magazine.