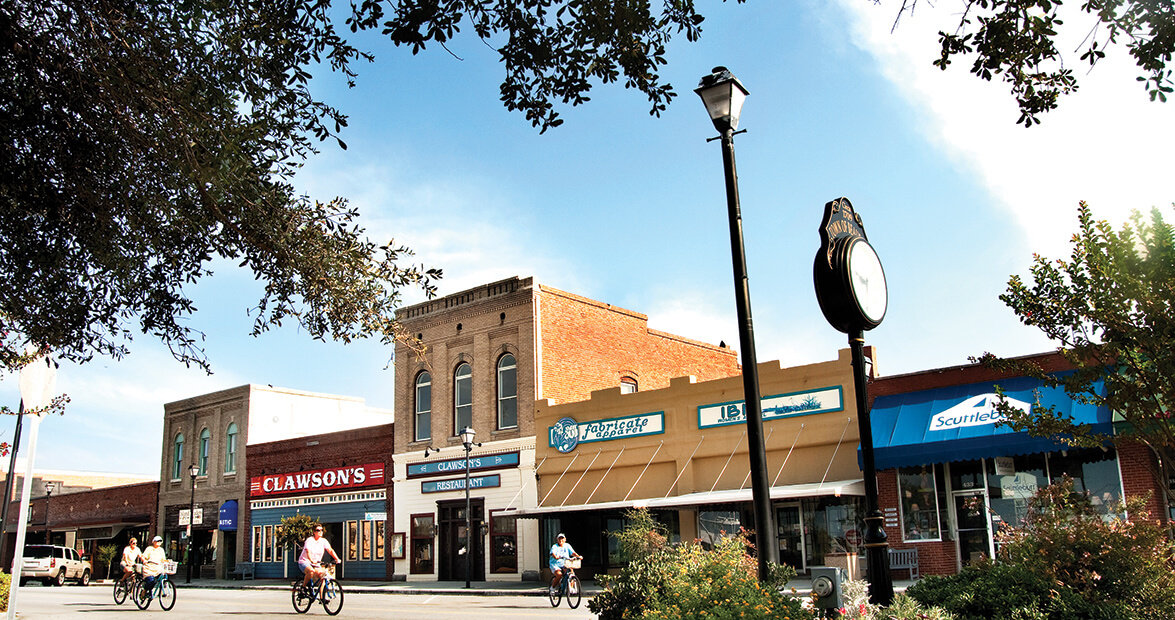 Skipping across the water, Captain Farmer’s boat cuts through the waves with the highlights of Beaufort streaming past.

To the left, peeking out from behind two waterfront houses, is Blackbeard’s reported former abode. Up ahead are remnants of the state’s last processing plant for menhaden fish — now the site of a sprawling new dry dock and housing development.

“The local people call it the smell of money,” Farmer says of the fishery that once fueled Beaufort’s economy but closed in 2005. “The tourists didn’t like it much.”

For more than a decade, Farmer has been shuttling tourists and locals across Taylor Creek to the numerous barrier islands dotted around the town.

“You can throw a baseball to the ocean,” says Farmer, who works for Island Ferry Adventures, one of the many water taxis that carry people from downtown Beaufort to the islands.

Today, Farmer — his given name is Henry Styron, but everyone knows him as Farmer — is giving a dozen tourists a late-afternoon spin around the watery block. With the sun hanging low, golden light spreads across the historic, white homes that line the downtown waterfront. White egrets peck at the mud. And wild horses take a drink within eyesight of passing boats and beachcombers.

“These ponies are here by accident and not by purpose,” Farmer says. “One of my favorite topics is talking about the horses. They’re such a part of the area.”

About 120 horses live on Shackleford Banks, an uninhabited but popular destination 15 minutes from Beaufort by Farmer’s boat. The horses are believed to be descendants of Spanish mustangs that got to the barrier island during shipwrecks in the 1500s. Smaller than their ancestors, they’ve had to adapt to life on a barrier island, surviving on brackish water and stunted vegetation.

Much like their beloved island ponies, the people of Beaufort also have had to adapt over the generations.

“The original name of Beaufort was Fish Town,” Farmer informs his boatload of visitors, shuttling them past outboarders and yachts in the waters where fishermen’s vessels once reigned.

Beaufort — pronounced Bo-fort and not to be confused with South Carolina’s Bew-furt — sits in Carteret County along North Carolina’s Inner Banks. Once you cross the bridge from Morehead City, the chain stores and hotels drop off, leaving only neighborhood streets with more than 100 historic homes and numerous bed and breakfasts.

As the town evolved, the water has been its constant. Before colonists made it their fishing hole, the Coree Indians dubbed their village here “Cwarioc” — Fish Town.

The Old Burying Ground documents the varied and seafaring history of the town, which was founded in 1709 and is the third-oldest in the state.

In the cemetery, deeded to the town in 1731, live oaks shade the resting places of soldiers from the Revolutionary and Civil wars, along with a little girl buried in a rum keg. That’s what her weathered tombstone reads: “Little Girl Buried in Rum Keg,” along with a drawing of a daisy.

The girl’s backstory is that her father took her along during a shipping trip to England in the 1700s. She died during the voyage. Her father, vowing to return her home, preserved her in a rum barrel. Although the story is slightly morbid, visitors connect with it, and they leave stuffed animals, seashells, and flowers on the girl’s grave, making her more popular than the British naval officer buried feet down in salute toward England.

Stories to be told

History and legends fill nearly every corner of Beaufort, home of the North Carolina Maritime Museum and the collection point for the presumed remains of the quintessential pirate ship, Queen Anne’s Revenge.

For years, Gwen Towles filled visitors in on the tales, narrating the town’s colorful tidbits from atop a double-decker bus run by the Beaufort Historical Association. Now one of the town’s 4,300 residents, Towles moved to Beaufort in 1986.

“Twenty years ago, it wasn’t like it is today because it’s changed a lot, but I find there is such a mix of people from all walks of life,” Towles says from her home across the street from Taylor Creek. Towles, 79, says she knew little about the town when she was younger, even though she lived only two hours south.

“Being from Wilmington, we were not familiar with Beaufort when we grew up because everybody went to Wrightsville,” she says. “A lot of it is where your parents took you, and for some reason, it’s always been regimented — Charlotte crowd to Myrtle and Raleigh crowd comes here, and it’s just always been that way.”

It wasn’t until she and her husband lived in Goldsboro that she discovered the Crystal Coast and Beaufort.

“All those folks come to Atlantic Beach, so my neighbors introduced me to Beaufort back then,” she says. “I thought it was just the most charming place in the world.”

Downtown, a red, wooden caboose is parked among the T-shirt shops, art galleries, and general stores. It holds hundreds of books, from mysteries to nonfictions, that visitors can browse and buy for 50 cents a paperback — an ideal pit stop for beach reading.

It’s 11 a.m. at Beaufort Grocery Co., and an employee writes the lunch specials on a sidewalk chalkboard — chicken pesto noodle soup, grilled mahi sandwich with peach Vidalia sauce. Hungry visitors peek into the window. The restaurant doesn’t open until 11:30, but people are ready to eat. Some camp out at the tables outside, others make laps to nearby shops before walking back hopeful that enough minutes have ticked by.

“Sometimes, we have to lock the door just to get ready,” jokes Charles Park, who is the chef and owner, along with his wife, Wendy.

Before they opened Beaufort Grocery 20 years ago, the Parks lived in Charlotte, and they were among those who always bypassed the Beaufort waters and headed to Myrtle Beach instead. But when Charles, a chef trained at the Culinary Institute of America in Hyde Park, New York, went to the town for a job at a bed and breakfast, Wendy was quickly smitten.

“As soon as we drove into town for his interview, I said, ‘We are moving here,’” she says.

The convenience store turned popular restaurant in the historic district started out with just the couple, but now there are dozens of workers. Even in the winter months, the restaurant stays busy with locals the Parks have come to know and love.

“You could be the wealthiest person and hang out with the local fisherman who barely makes a living, and everybody’s just friendly to each other,” Wendy says.

The Parks used to have a boat. They got too busy building their restaurant, a catering business, and an event space. They rent picnic baskets to beachgoers. They sell to-go packages through a wine market in Emerald Isle. They can’t stop expanding, but they haven’t forgotten they live within a baseball’s throw to the ocean.

“Everybody has a boat except for me, which I’m working on. I’ve just got to quit thinking of ideas,” Wendy says. “You definitely need to have a boat if you live here or take the ferry services to the islands. We go for the whole day. We take a big cooler full of sandwiches, beer, and wine and our noodles and our chairs and umbrellas, and we’re there from 11 to 6.”

Fish Town has moved away from its fishing village roots. The processing jobs for the small, oily menhaden fish found in everything from cosmetics to dog food are no longer around. But the town has survived by reeling in retirees and tourists who share the same ties with the water that first drew settlers and shipwrecked horses to this corner of the Atlantic.

Through the Beaufort Inlet, Farmer arches his boat and promises the youngest passengers they’ll see some of the area’s oldest family lines before they return to dock.

“We’re not going to leave any sand dune unturned,” he says, the coastal wind carrying his excitement. “We’re going to see some ponies.”