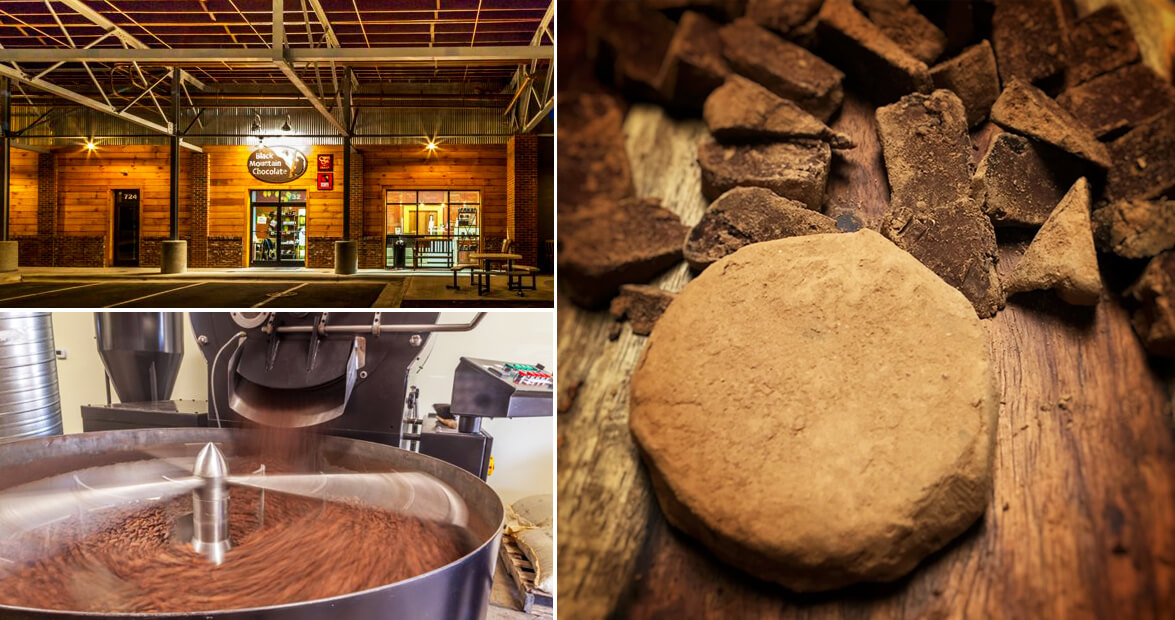 “After my midlife crisis, instead of buying a sports car, I bought a chocolate factory,” Peters says.

It was a flight of fancy. A real-life Willy Wonka, sans all the eccentricities, Peters hopes visitors will indulge themselves in flights of fancy of their own by experiencing — not just eating — the chocolate he makes.

Fortunately, chocolate lovers of the Triad and beyond needn’t look any farther than their own backyard. Black Mountain Chocolate is, despite the name, right in downtown Winston-Salem.

But Black Mountain Chocolate wasn’t always in the Triad. When Peters purchased it in 2013, it was located in the small mountain town of Black Mountain. Peters had taken a particular interest in the chocolate making business after working in banking and legal services most of his life. He decided he was ready for a change of pace — a “second act,” as he calls it. Peters started researching North Carolina-based chocolate factories, and putting out feelers to get a sense of the industry. He came across Black Mountain Chocolate on Facebook, and sent a message to the owner asking how many bars the factory produced in a year.

The response Peters received was rather curt: “A lot.”

Peters decided to drop it, thinking it was a dead end. But not more than two months later, he received a follow-up message: “Why do you ask?”

Peters then expressed his hopes of opening his own chocolate factory, and explained that he was trying to gather some business data. The next thing he knew, Black Mountain Chocolate’s owner asked if Peters would consider buying an existing business instead of starting his own.

“He was ready to move onto his next venture as well,” Peters says. “So we talked, and about a month after that, my wife and I bought the company.”

By the time Peters relocated Black Mountain Chocolate to Winston-Salem’s Trade Street in 2014, he had a clear idea of what he wanted to be able to offer visitors.

“Education and the experience is a big part of Black Mountain Chocolate,” Peters says. “When we opened, frankly, the world didn’t need any more chocolate — but there was a space for people to learn about chocolate and where it comes from, and come away with a better understanding of everybody’s favorite food.”

When visiting Black Mountain Chocolate, patrons instantly smell the rich aroma of cocoa. Everything is “bean-to-bar,” meaning that the chocolate begins with raw cacao beans from the Dominican Republic, which are sorted for quality, roasted, and separated from their husks. Then they’re broken into smaller pieces, which are called “cacao nibs.” Those nibs are then turned into different types of dark chocolate treats, from their Big Winston Chocolate Bars to chocolate truffles, hot chocolate mix to baked goods.

“I’m an inveterate tinkerer,” Peters says. “I like to experiment with things to see if I can improve them or come up with something new. Our Big Winston Bars are a lot of fun because the chocolate is just the canvass for a variety of flavors.” Some of these combinations include Salted Caramel Pecan, Ginger-Chili with goat’s milk, and their limited edition Champagne, Caramel, and Strawberries.

Watch the magic happen from start to finish through the factory’s large windows. On select Saturdays, Black Mountain Chocolate offers guided tours that take visitors behind the scenes for a more in-depth look at each part of the process.

But the look-but-don’t-touch rule doesn’t apply here. During a guided tour you’ll also learn how to properly taste fine chocolate. Peters walks visitors through each step, which involves all of the senses. By just looking at the chocolate, you’ll see how certain concentrations of beans will produce different colors. Next comes the smell exercise, during which guests each melt a small section of a bar with their thumbs to release the aroma.

Then comes the hard part: When tasting chocolate, you’re supposed to break it up with your teeth into smaller pieces, then hold it against the roof of your mouth while it melts.

“That is very difficult to do,” Peters says. “All of your senses are crying out, Eat it! Eat it! But as the chocolate melts in your mouth, the flavors will present themselves, and they’ll actually change over time.”

Peters has been known to compare this tasting process to that of tasting fine wine, and he would be the first to argue that fine chocolate can have even more complex notes than wine. But it’s not about being a chocolate snob, he says; it’s about extracting the most information and enjoyment as possible from the experience.

Whether in the form of a bar, truffle, or tart, chocolate may very well be the world’s favorite dessert. But when you think about fine, artisanal chocolate, your mind tends to wander to patisseries in Paris, cafés in Italy, or expensive New York shops. You might think of gold-wrapped morsels, too pretty to eat. So when you have that cocoa craving, you wind up settling for a cheap bar from the grocery store — which is still delicious, of course, but might not quite hit the spot.

That’s where Black Mountain Chocolate comes in. Your friendly neighborhood chocolate factory, ready to satisfy even the most decadent sweet tooth.

So what is the secret to fully appreciating Black Mountain Chocolate?

“The main thing is to remember is to slow down, and concentrate on your senses,” Peters says.

Slowing down while eating a bite of mouthwatering chocolate sounds like a challenge. But it’s one we are willing to accept.