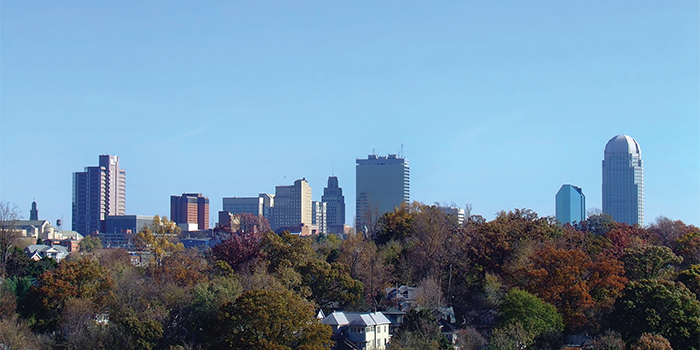 In the past decade, Winston-Salem’s downtown Arts District awoke from a long slumber to become a vibrant swath of galleries, shops, bars and restaurants. But come Sunday morning, it’s so quiet that you can almost hear an egg crack.

While most business are dark, the hungry are seeking brunch in Winston-Salem. They flock to Trade Street for the kind of down-home, hearty and indulgent fare you can only justify once a week. But oh, it’s so worth it.

The line forms early on the sidewalk outside of Sweet Potatoes, the first restaurant to open in the once desolate district in 2003. Friends and like-minded strangers pass the time comparing notes on intended orders. When co-owner Vivián Joyner ushers them in at 10:30 a.m., it feels like a homecoming.

A few blocks down at Mary’s Gourmet Diner, which opens at 10, diners are already slathering biscuits with apple butter and enjoying their second cup of Krankies coffee. You can easily spot the first-timers by the expression of joyful shock when their generous orders arrive. 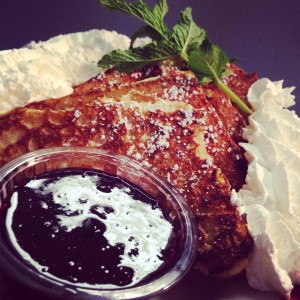 “We don’t want anyone to go away hungry,” says owner Mary Haglund in grand understatement. Haglund says they cook 15 dozen cases of locally-raised eggs each week. That’s more than 2,100 eggs. And they start each day making biscuits from 10 pounds of flour; on weekends, they fix as many as four batches to keep pace with demand.

Popular “build your own” brunch omelets feature four locally-raised eggs and a choice of at least three add-ins – from a list of nearly 40 options – plus a choice of bread. Most dishes come with a side, such as a deep bowl of creamy grits with jalapeno pimento cheese, a mountain of hash browns or stack of apple-smoked crisp bacon. Tempeh, tofu and a true garden variety of vegetarian choices also abound.

While the weekday menu offers smaller and lower-priced versions of house specialties, the brunch-size portions are awe inspiring. Be sure to arrive hungry to if you plan to take on the Crispy Madame – ham and Swiss on grilled sourdough topped with white cheese sauce and a fried egg – or the signature Apple Butter Baby, a discovered-by-accident delight that tucks scrambled eggs, smoked sausage and house-made apple butter between slices of wheat toast.

Inspired by seasonal ingredients, Haglund often offers daily specials. On a recent visit, she riffed on the rich sausage gravy she ladles over biscuits to create a luscious alternative with plump shitake mushrooms. Southern food writer Nathalie Dupree, in town for Salute! The North Carolina Wine Celebration, declared it delicious. 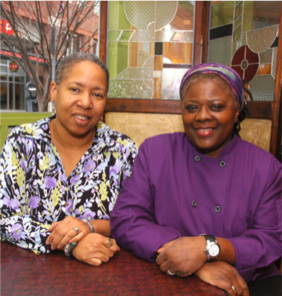 Not surprisingly, sweet potatoes figure prominently in the offerings at Sweet Potatoes, which plows through about 300 pounds of locally-grown tubers each week. There’s the towering stack of sweet potato pancakes (topped with fried chicken tenders, apple marmalade and ginger butter), the Un-French Toast made with sweet potato bread pudding and, of course, flaky sweet potato biscuits.

Not in the mood for North Carolina’s No. 1 crop? Indulge in the Uptown Oyster, a twist on traditional Benedict that tops Texas toast with gigantic fried oysters, bacon, scrambled eggs and country ham bordelaise. Perhaps the Creole-sauced fish and grits is more your speed? If you arrive after 12 noon, act like an in-the-know local and order the It’s a Sunday Thing! The plate-filling dish features half a buttermilk-brined fried chicken, spicy greens and, of course, a biscuit.

“It’s Sunday in the South. Got to have friend chicken,” jokes Vivián Joyner, who runs the front of the house – often carrying babies to give appreciative mothers a chance to enjoy their meal – while partner Stephanie Tyson cooks in the kitchen. “I’ve tried a lot of fried chicken. Let me tell you: Nobody makes fried chicken like Stephanie.”

Sweet Potatoes only started serving brunch a few years ago to satisfy customers who begged for it. Regulars barely glance at the menu, nodding their orders with the familiarity of one signaling a trusted barkeep. Newbies stressed out over what to order often find comfort from the concierge-like advice of servers, all of whom share a devout passion for food.

Whatever you choose, and no matter how stuffed you think you’ll be, do not skip appetizers. The fried green tomato and okra combo is a classic, and you’ve got to be strong to resist the Three-Cheese Macaroni and Country Ham Soufflé. The Freshly Fried Pork Rind Basket is insanely delicious, perhaps the best rendition you’ll taste this side of Oaxaca.

“A Latin American woman who was here a few weeks ago for a conference ordered it,” Joyner recalls. “She told us that her poppy made them for her when she was a little kid and she hadn’t tasted anything like it since. She meant her grandfather, and she had tears in her eyes.

“We hear that about our biscuits and fried chicken, too,” Joyner adds. “It means so much to us to know that our food really means something so special to people.”

Remarkably, Sweet Potatoes has made this big impact in a very small space. The restaurant has just 13 tables and a small bar with a total of 50 seats. With no room to expand – it is sandwiched between two well-established businesses – it will remain a decidedly intimate space. 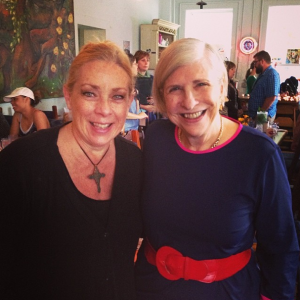 Mary’s Gourmet Diner first opened 14 years ago in a different, much smaller location as Breakfast Of Course. It converted a shuttered, former bank on Trade Street into its funky, art-filled space in 2010. Two years ago, Haglund added a large, canopied outdoor patio, increasing capacity to about 150 seats.

Despite this difference, Mary’s Gourmet Diner and Sweet Potatoes have a great deal in common. Both are women-owned businesses that contribute significantly to the growing success of their diverse community. And both feature chefs who are working on new cookbooks projected for 2015-16 release.

Joyner says Tyson is hard at work on her second book, which will focus on soul food. Her first, Well, Shut My Mouth! spotlights recipes from the restaurant, including its legendary biscuits.

“Soul food is comfort food, and that’s something Stephanie really understands. She’s doing a lot of research now, and I get to have the privilege of tasting recipes,” Joyner says with a laugh. “So far, I’ve got to say, I’m pretty happy.”

Haglund’s project, a combination cookbook and memoir, will be her first. The working title is Mary Had a Little Restaurant.

“I’m just a housewife that wanted to run a restaurant,” Haglund says, downplaying her culinary skills. “I’ve been so fortunate to have their experience of watching my dream come true. I can’t wait to see what comes next.”

Jill Warren Lucas is a freelance writer from Raleigh who can’t resist Hollandaise. Read more of her stories from our archive.