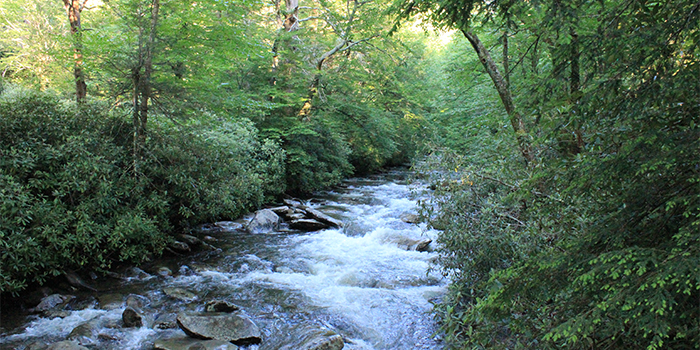 When most people think of eating fish in North Carolina, they think of the coast, of fishmongers like Mott’s Channel, or of reeling in one themselves; they don’t think of the mountains. They should. The clear, cold streams that tumble of out the highest places, shrouded in trees and alive with the sounds of insects and birdcalls are teeming with trout, and trout are good eating.

In the deep mountains, near the edge of Great Smoky Mountains National Park, the Eastern Band of Cherokee Indians keep some 30 miles waters within the Qualla Boundary stocked with trout. To keep the creeks, streams and rivers full of fish, they manage the Cherokee Tribal Fish Hatchery, a facility capable of raising 1-1.5 million trout.

Even though capacity is a whopping one-million-plus fish, each year, Tribal Fish Hatchery rarely operates at or near capacity as a precaution for the health, and size, of the fish they raise. Instead of going for quantity, they aim for quality, with some 300,000 fish harvested every year, a quarter-million of which go into the streams to be caught in both keeper and release waters.

The process is a lengthy one, with fish going from eggs to a stockable size in 12-14 months. The Tribal Fish Hatchery partners with other fish hatcheries as part of a National Broodstock Program to raise, and stock streams with, some of the best fish available. (Take a look at the Western North Carolina Fly Fishing Trail, the first of its kind, for places to catch your own.) 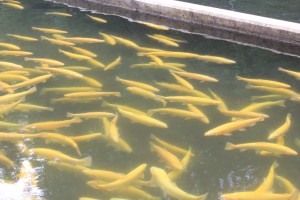 While about 95 percent of their stock are rainbow trout, they also raise golden trout occasionally.

At the Tribal Fish Hatchery, about 95 percent of their stock are rainbow trout, with the remaining 5 percent being predominantly brook and brown trout, though they do raise golden trout from time to time. The fish spend their time in indoor tanks when they’re at their smallest, then graduate to larger concrete raceways (fed by cold mountain river water) before hitting the streams.

While the Tribal Fish Hatchery doesn’t distribute directly to restaurants, anglers aren’t the only ones who get to enjoy this seafood from mountain streams. All across Western North Carolina you’ll find trout on the menu. In Maggie Valley, the trout at Maggie Valley Restaurant, an institution since 1952, is much lauded by locals and visitors (especially the whole fried trout) alike. Down around Bryson City, River’s End Restaurant serves trout a couple of ways (and has great river views from their dining room. In Asheville, you’ll find trout in a number of restaurants here, with options from fine dining, like at Corner Kitchen, to downhome places like Homegrown, where they use local ingredients to create dishes inspired by mountain traditions.

The bottom line is this: no matter where you are in our state, you aren’t far from some fine seafood, no matter if it comes from the deep rolling blue of the Atlantic or the crystal clear mountain streams around Cherokee.