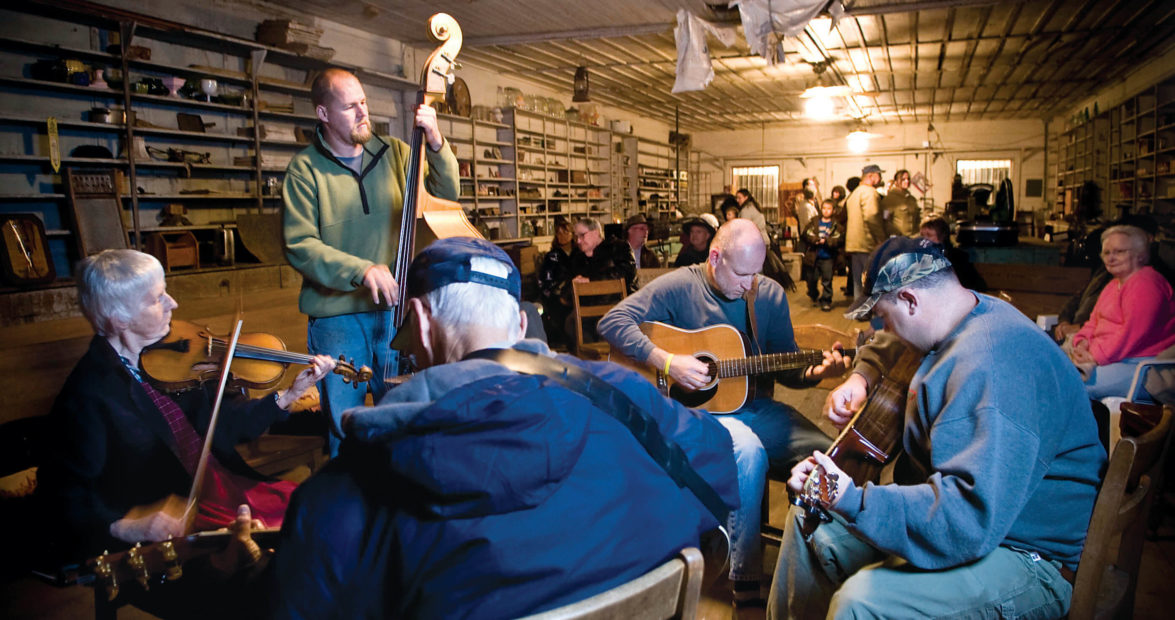 In the last Saturday of every month, after the sun sinks into the trees at the edge of his yard, Amos McLamb steps out his front door and crosses the road to the old store: a long, shotgun-narrow building with white clapboard walls, a rusted tin roof, and the words “Clear Run Grocery” still visible on its side. McLamb unlocks the door and turns on the lights. If it’s cold outside, he gases up the space heaters in the middle of the room; if it’s hot, he switches on the ceiling fans. Then he waits.

There’s no calculus for when people start arriving, but sooner or later they do, carrying guitar and banjo cases, mandolins, and the occasional fiddle. Often, there’s a crowd; other times barely a quorum. Either way, those who show up settle into a collection of mismatched chairs and retired church pews, tune up their instruments, and start playing: “Wildwood Flower,” “The Old Home Place,” “Rolling in My Sweet Baby’s Arms,” or “I’ll Fly Away.” Each song tumbles into the next as somebody counts off, and one by one everybody else jumps in — mandolins chopping, guitars thrumming, banjos racing at full gallop. It’ll be hours before anyone checks his watch, and, by the time they all head home, midnight likely will have come and gone. (Story continues below the video.)

Welcome to “the pickin’”

For more than a dozen years, local musicians have gathered here in the southeastern corner of Sampson County to play songs that for many of them go back generations. It doesn’t matter if the last Saturday of the month falls on Christmas Day or New Year’s Eve, if there’s freezing rain or it’s 100 degrees, they come (although hot summer nights force them onto the porch, where they play to the cars passing on N.C. Highway 411). There’s no smoking and no drinking, and, although plenty of people show up just to listen, they rarely applaud: pickin’s aren’t performances.

“The reason we have this is to give musicians a place to play,” McLamb says. “It’s social, but it’s not a show. The musicians would still be here, even if no one came to hear them.”

McLamb is 67 years old, an ardent and animated man with a close-cropped mustache and a voice he summons from deep within his chest. He laughs easily, and when he gets excited, which is often, he snaps his face forward and widens his eyes. Thirty-some years ago, he accidentally sawed off the tops of his fingers on his left hand while building a pinewood derby car for his son, but even before then, he didn’t play an instrument. “I like to sing a little,” says McLamb, whose mother was a classically trained soprano, “and I love to listen.”

When the pickin’s first started, musical gatherings like this were largely unheard of in North Carolina’s Sandhills. McLamb and his son, Joshua, who helped organize the gatherings and taught himself to play upright bass one night at the store on a borrowed instrument, weren’t sure the idea would take off. But it did. Within six months, the place was consistently crowded. “And the hardest thing in the beginning was to get people to keep their money in their pockets,” Joshua McLamb says. “We’re like, ‘No, this is free.’”

Although the McLambs keep the store’s icebox stocked with soft drinks, one fan of the pickin’s, Lewis Register, decided to start supplying them, too. “I’d go to open the store on Saturday night,” Amos McLamb says, “and I’d see two or three 12-packs of Mountain Dew on the steps, and underneath there’d be $4 for ice. And a note that said: ‘Buy ice.’”

One night a Boy Scout troop from a camp across the river came over with peach and cherry and apple cobbler, and other attendees sometimes bring food from their own table, especially around the holidays. Amos McLamb remembers one December when half the store’s counters were full of food. “People were coming in and coming in, and another dish would show up,” he says, “but nobody was eating.” He was puzzled. Finally, one of the women came up to him and said, “They’re waiting for you to say a blessing, and then they’ll eat.” So McLamb obliged. “I quieted everybody down and thanked them and blessed the food, and just like that” — he snaps his fingers — “people started eating.”

The idea for the pickin’s began with Joshua McLamb and Amos’s nephew, a banker and guitarist named Bill Norris. After spending a few years in Murphy, deep in the Blue Ridge Mountains, Norris came home talking about the bluegrass jam sessions he’d been to up there, especially one that was held in a little country store. “A place where you’d walk in, and there might be five people or there might be 50,” recalls Joshua McLamb, who has a more studious and deliberate demeanor than his father. “Bill came down from the mountains, and he kept telling us about this pickin’. He said, ‘I wonder if that’s something we could do down here.’”

It seemed like a good idea to Joshua, who at the time was still learning to pick out chords and fiddle tunes on a guitar he’d bought from a college classmate. He suggested using the old store across the street. Only thing was, the building had been shuttered and dark for almost 50 years.

A century ago, that store was the center of Clear Run, and Clear Run was more than just a bend in the road between Wilmington and Fayetteville. In those days, it was a community with its own post office and a population of farmers, workers, and sharecroppers. Situated along the banks of Black River, it was also an important trading depot. And McLamb’s grandfather, A.J. Johnson, owned just about the whole place.

Johnson had grown up a quarter-mile away on his parents’ farm. In 1871, when he was 28 years old, he bought 268 acres of land from the Herring family, who’d owned it for more than 100 years. He added that to the 208 acres his family owned and continued to collect parcels, eventually amassing about 1,500 acres. On this land, which straddled the river, he built a turpentine distillery, a cotton gin, a gristmill, a sawmill, a blacksmith shop, and a farm. The store was already operating — McLamb has a Herring ledger that dates back to 1740 — and there was a post office in the back room. Johnson appointed himself postmaster and changed the town’s name from Herringsville, as it had long been called, to Clear Run. “Actually,” Joshua McLamb says, “he called it ‘Clear Runs,’ but somewhere along the way the ‘s’ disappeared. He named it after Clear Run Creek, right nearby.”

An apt namesake, as it turned out. In the late 1890s, on top of everything else, Johnson became a steamboat captain. The first vessel he bought was a split-paddlewheel called the Lisbon, and then, in 1899, he commissioned from the Clear Run shipyard a 57-ton stern-wheel steamer, which he christened the A.J. Johnson. “It was the largest steamboat to ever ply these waters,” Joshua McLamb says. And Clear Run was about as far upstream as it could go.

Piloting the boat up and down Black River to the Cape Fear, Johnson carried naval stores, lumber, turpentine, hogs, and chickens to Wilmington and returned with salt, sugar, tea, flour, and other staples. The boat made as many as two trips a week, “unless there wasn’t enough water in the river to float it, or it was upside down,” Joshua McLamb says. “It spent about as much time upside down as it did right side up.”

In July 1914, just three months after Johnson died, the steamboat sank for the last time. Tied to a dock across the river from the store — and from the house where Amos and Joshua McLamb now live — the A.J. Johnson came unmoored during a storm and washed toward the opposite bank, heaving and listing. Finally, it sank.

The store, meanwhile, stayed open until the late 1950s, when the last of the sharecroppers left Clear Run. “This was the final big port on Black River in naval stores, but business just sort of tapered off,” Amos McLamb says. “There was no more reason to keep the store, because there were no more families here. You’d sit there all day and maybe have three customers.”

When his family finally decided to shut the store, they simply walked out and turned the key, leaving everything as it was: shelves stocked with hot chocolate, syrup, Vicks VapoRub, Argo cornstarch, Calumet baking powder, Cut-Rite wax paper, Red Circle Ant Killer. Joshua McLamb and Bill Norris spent two weeks cleaning out the store to get ready for the first pickin’, but they left much undisturbed. The place still has the feel of a time capsule: a few shelves occupied by brightly labeled boxes and jars, and at the back of the store stands a wall of wooden mailboxes that once was part of the post office.

Some of the gathering’s regulars, too, keep alive the store’s ties to the past. Brothers Michael and Wade Blackburn and their aunt Martha Hudson belong to one of the families that once sharecropped at Clear Run, and they still live close by. Each of them has been playing bluegrass almost since birth. Wade can shred a mandolin, Amos McLamb says, and Michael “can play anything with strings — guitar, fiddle, banjo. If you put strings on a hay baler, he’ll play it.”

Hudson, who switched from banjo to guitar when she was about 10 to make it easier for her to lead the singing, remembers coming out of the fields for lunch every day with her parents and siblings (who each learned a different instrument), and playing until it was time to go back to work. “We could get four songs in before we had to quit,” she says. They played that way six days a week, at night, and all day on Sunday after church.

The December 2008 pickin’ came two days after Christmas. The store was full — almost raucous — and the music was loud: “Take this Hammer,” “Old Slew Foot,” “I Don’t Want Your Rambling Letters,” “Leftover Biscuits,” “Your Love is like a Flower.” Martha Hudson, her guitar strapped around her, stood at the center of six or eight pickers, calling out song titles and chords and keys.

Joshua McLamb was standing in the back with his five-string upright bass, plucking away. The mandolin player and the banjo picker took turns busting the songs wide open. And the benches and pews were full of listeners, catching up with each other after several days of cocooning with family.
It got late, and then later, and finally people started packing their instruments. Martha Hudson beamed. “Oooh, I’ve stayed up many a night until two or three o’clock in the morning, playing music.”

“I know!” Amos McLamb answered, and as she left the store, the last two players, a guitarist and a banjo picker, started in on a tender chorus of “Angel Band.”

Clear Run Grocery
Harrells Highway
Garland, N.C. 28441
The store has no specific street number but is located in the 8000 block of Harrells Highway between the Black River and Lundy Road.