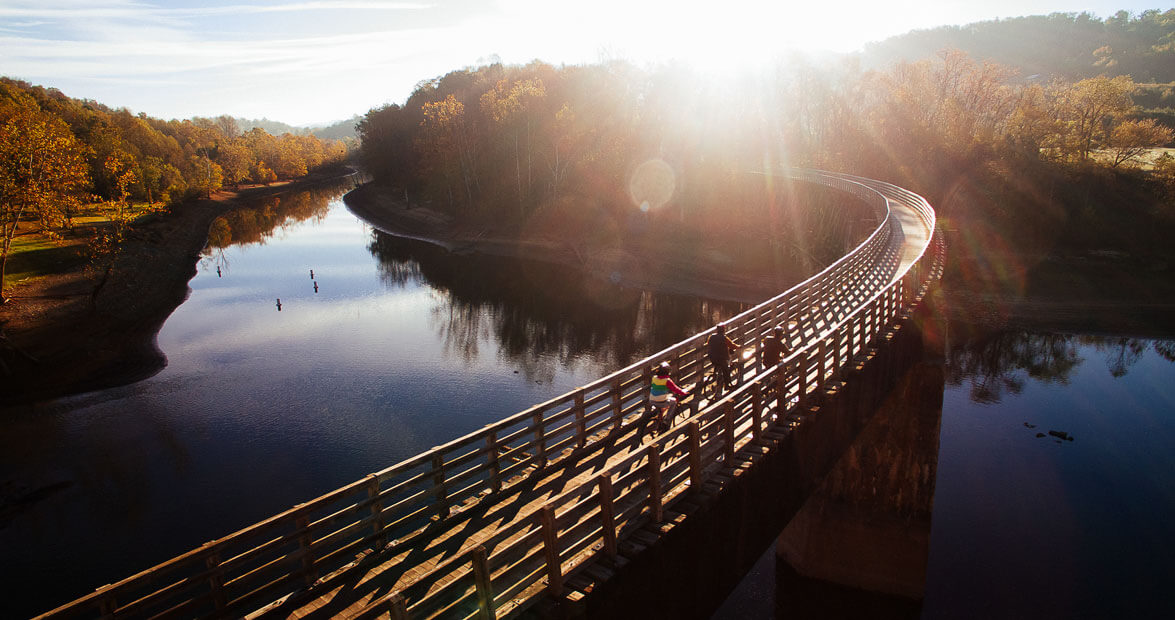 Jerry Camper co-founded the Virginia Creeper Trail Bike Shop when he was 35 years old. That was the year the Abingdon, Virginia, native realized “all those people” walking around downtown weren’t locals. “I didn’t understand how big tourism was in the area,” he says. “Around that time, more than 100,000 people were using the trail every year. I thought, you’ve got to be kidding me.”

Jerry and his brother Gary knew a good opportunity when they saw one. They opened Abingdon’s first bike rental shop right off the trailhead of the famous Virginia Creeper Trail. That was 15 years ago. Since then, he’s recognized a pattern. “A lot of people come here to bike the trail, but then they come back — or they extend their trip an extra day or two — to check out the area’s other attractions,” Camper says. From cycling to hiking to fishing to wine and beer tasting, Abingdon’s outdoor activities restore the body and soul with a healthy dose of fresh mountain air. Located just over an hour from Boone, two hours from Asheville, and three hours from Greensboro, Abingdon is a nice day trip or weekend getaway for many North Carolinians.

From its southernmost endpoint, just shy of the North Carolina state line in Whitetop, Virginia, the Creeper Trail stretches 34 miles, gradually climbing northwest until it reaches the Abingdon trailhead. Most people take the opposite route, letting gravity lead the way. “A lot of first timers will get on their bikes in Abingdon and ride 17 miles downhill, about half the trail, to Damascus,” Camper says. “They’ll usually come back later to do the whole 34 miles to Whitetop. Locals will often ride the whole way.”

For most of the trail, cyclists coast along a wide path consisting of dirt, tiny gravel, and crushed limestone. While their legs take a break, their senses get a workout. The trail is a visual feast, with vistas of pastoral countryside punctuated with century-old farmhouses, towering pine trees, wildflowers, and 47 trestles and bridges. “One is about 700 feet long and crosses South Holston Lake,” Camper says. “To think that it was built in the 1800s, it’s remarkable it’s still standing.” 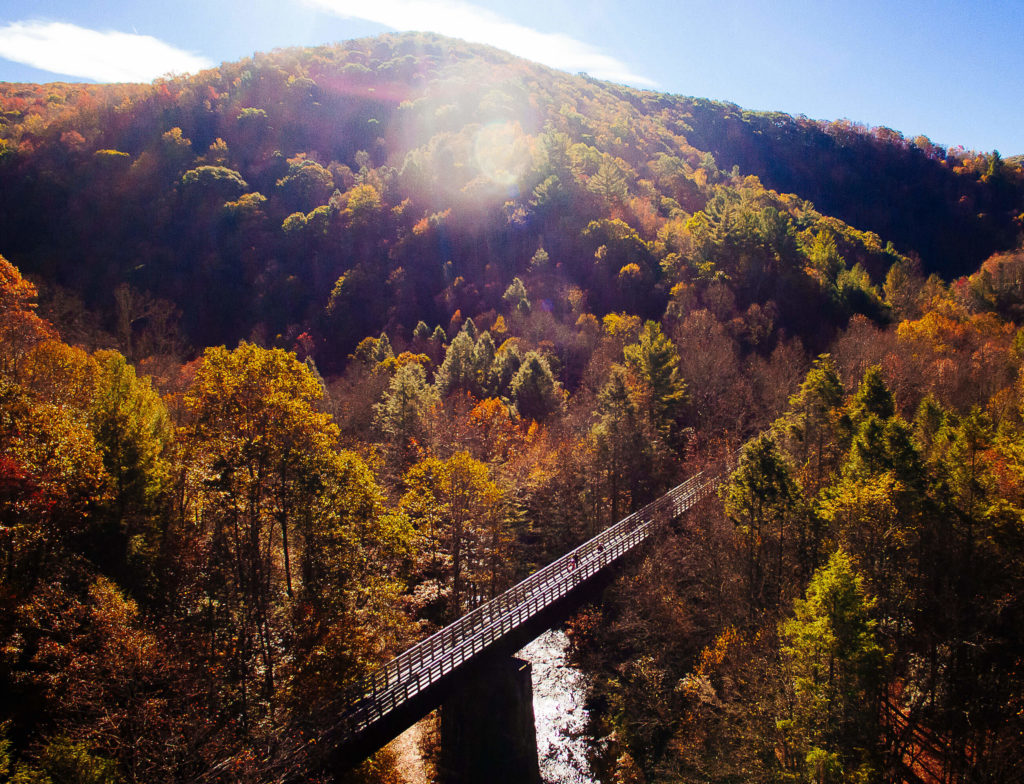 The Virginia Creeper Trail is a visual feast, complete with 47 trestles and bridges.

Camper says cyclists should expect to spend about five or six hours on the trail, including time for meals — passing through a town every eight miles or so, there are plenty of dining options. His recommendation? Pull off at the Alvarado Station, ride about a quarter of a mile, and follow the signs for Abingdon Vineyards.

Elizabeth and Loren Gardner first laid eyes on Abingdon’s lush farmland this past March when they flew in from California to help their best friends move cross-country from Napa. “We stumbled upon this winery that was for sale, and Loren just lit up,” Elizabeth says. “He’d studied wine making at University of California, Davis. It was perfect.”

Elizabeth and Loren bought the 13-acre vineyard and followed in their friends’ footsteps, moving their family from Napa to Abingdon. Today, the couple and a small team — including their best friends — hosts Abingdon locals and visitors, who flock to the picturesque riverside grounds for tastings of more than 20 wines and gourmet picnics with wine, cheese, and an array of meats and olives. “At least once a month — and usually weekly — we have special events on the grounds. Last month, we roasted a whole hog and had a live band,” Elizabeth says. 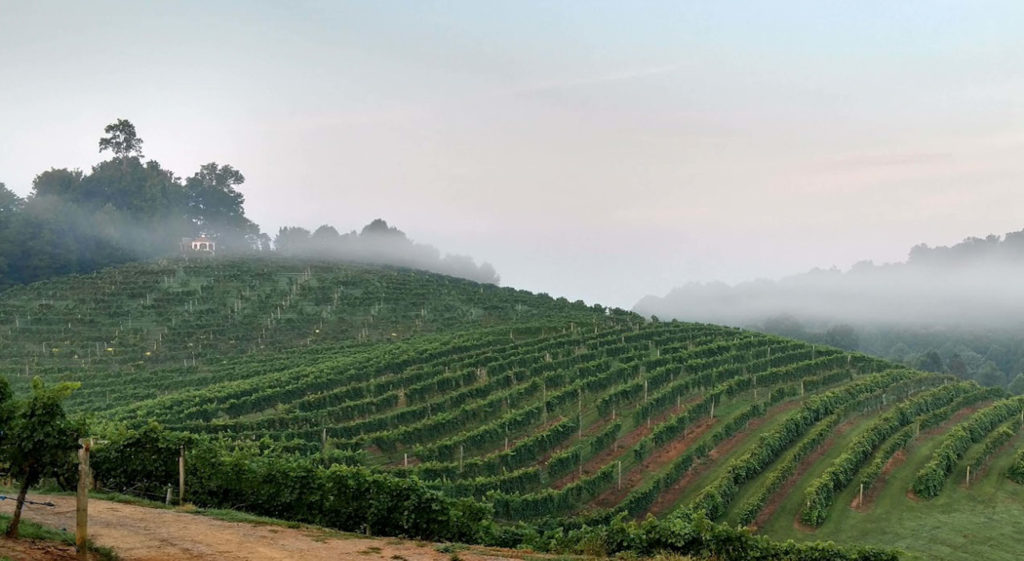 The winery is just up the creek from the South Holston Lake, which crosses into North Carolina. “People in boats or kayaks will often come upriver to our dock, hop out, and do a wine tasting,” she says. Other guests bring their kayaks with them to the vineyard and put in there. “When the creek water is really high, you can kayak upstream, or downstream to the lake.”

View from the top

A good pair of sturdy, comfortable shoes is the only equipment required to experience Abingdon’s mountain trails. To hike one of Camper’s favorites — complete with wild ponies — head over to Grayson Highlands State Park and follow the well-marked signage to the easy, half-mile Rhododendron Trail. “If you have something sweet in your backpack, the ponies will come right up to you and pester you to death,” Camper says with a laugh, noting that park rules prohibit feeding them. “They’re wild and friendly, if you can use those two words together.” 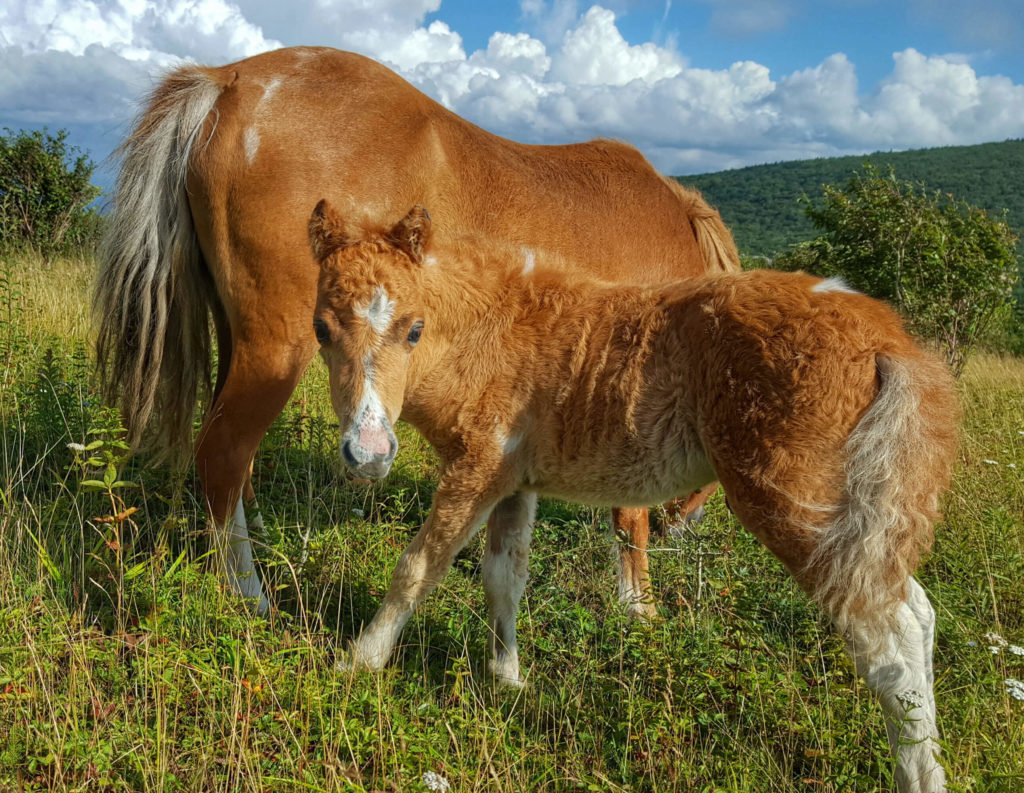 Hiking these mountain trails may lead to an encounter with the area’s wild horses. photograph by Bob Diller

Bruce Wankel, Abingdon’s resident fly-fishing expert and owner of the Virginia Creeper Fly Shop, shares a secret for people who love to bike and fish. “Riding along the Creeper Trail from Damascus up to the top of the mountain, you’ll spend about 75 percent of your time along Whitetop Laurel Creek,” he says. There, the trout are jumping. “Pack your fly-fishing gear so you’ll be ready. When people who love to fish get up there on their bikes, they wish they’d known about it.”

It’s not that you have to fly-fish — any old fishing pole will do — but there’s something special about fall fly-fishing in and around Abingdon. “Up here, you have a little more privacy, a little more serenity,” Wankel says.

Whereas conventional anglers cast from the bank, fly-fishermen become one with the water. “With fly-fishing, you’ve got to actually get in the river,” Wankel says. Wearing felt-sole shoes, anglers tread softly and quietly so they don’t scare the fish. They silently observe the insects to learn more about what the fish are eating. They keep a low profile. “People who find a thrill in fishing want to get outdoors, breathe in the fresh air, and reconnect with nature. I’ve had this fly shop for 25 years, and I can tell you that this is a good place to fish.” 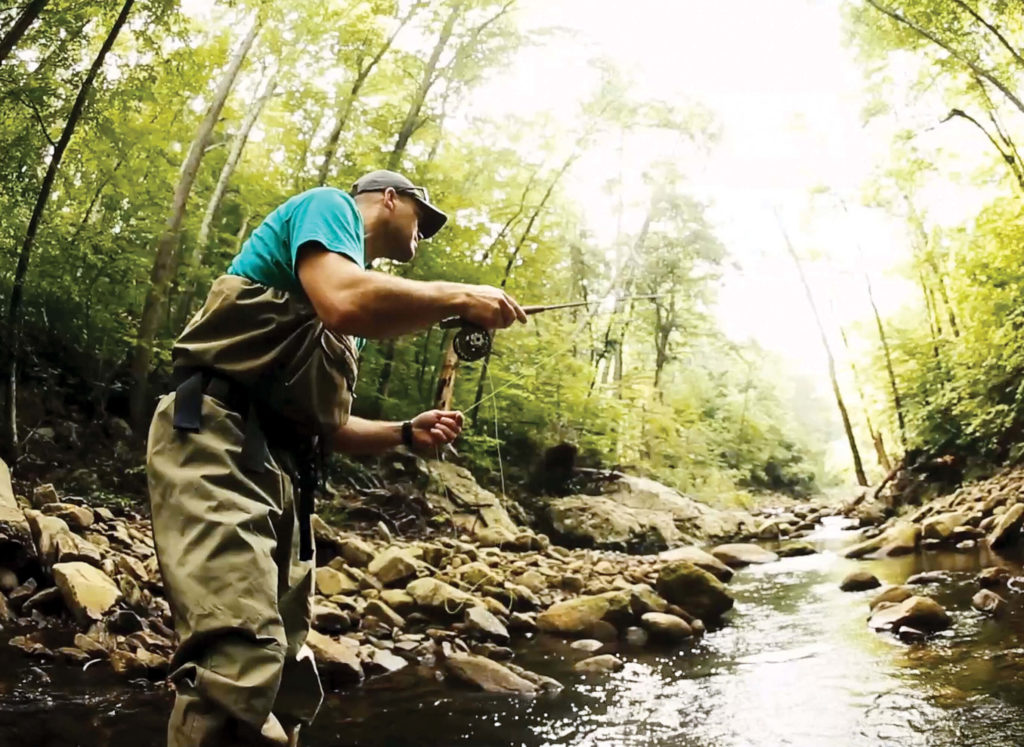 A fly-fisherman tries his hand at hooking a fresh catch. photograph by Jason Barnette

For trout-fishing enthusiasts with no desire to ride a bike, Wankel recommends the south fork of the Holston River, which starts near Sugar Grove, Virginia, and flows under Highway 58 between Damascus and Abingdon. Before heading out, give Wankel a call or stop by his shop; he and his guides can give you a map and circle the best spots for casting a line.