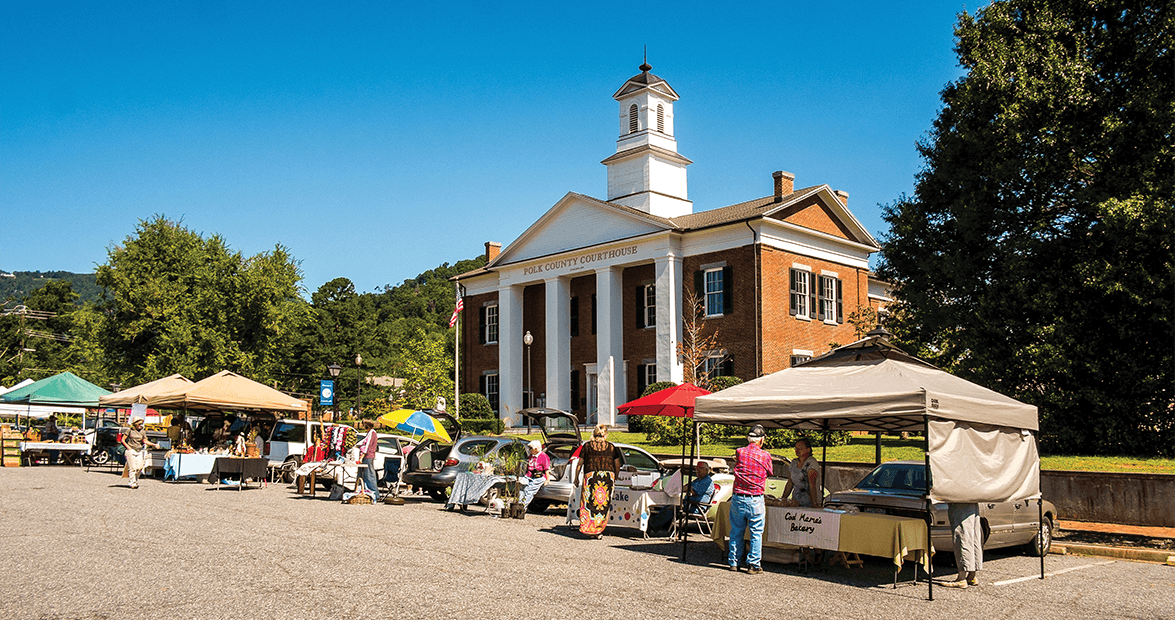 A cool wind blows through the tailgate market near the Polk County Courthouse this Saturday morning. Walking through the market, it’s impossible to miss the sound coming from one tent about halfway down the row. “I throw the pots and she talks about ’em,” booms Charlie Sullivan in a thick Cape Cod accent.

He’s sitting on the tailgate of his Dodge truck while his wife, Penny, describes the pottery lying on the table in front of her. Just about every person who walks up to the booth says something along the lines of, “Y’all aren’t from around here, are you?”

No, not originally, Charlie says. But like everything in Columbus, there’s a story.

The couple moved here from New England about a year ago — “semi-kinda retirement,” Penny calls it — but they’ve owned land in Columbus for nearly a decade. Friends told them about the North Carolina mountains, and the first time Charlie and Penny visited, they started looking for property.

Dressed in a black polo shirt with tattoos on his forearms and a rust-colored goatee flecked with gray, Charlie doesn’t look like someone who would throw pottery. But he started in high school and enjoyed it, so he picked it up again when he and Penny moved to Columbus.

From Charlie’s tailgate, there seems to be just as much talking as there is selling at the market today. “You try to do something that should take 10 minutes and it takes 30 because you want to stop and talk to everyone,” Charlie says.

The hurried vibe of an urban farmers’ market would be out of place here, where vendors want to visit with their customers.

At a nearby booth, Leslie Richardson tells a customer about the types of chickens she raises. She’s animated, waving her arms and flipping through a book full of pictures of hens. “This market is slow,” she says between helping customers, “and that’s the thing I love about it.”

Richardson worked in health care for years, raising poultry and selling eggs to friends on the side. “I just love chickens. It got to be where my real job and my chicken job were fighting.” About five years ago, Richardson was laid off. “I was like, ‘This is perfect! I don’t have to quit. I can do chickens all the time.’ ” 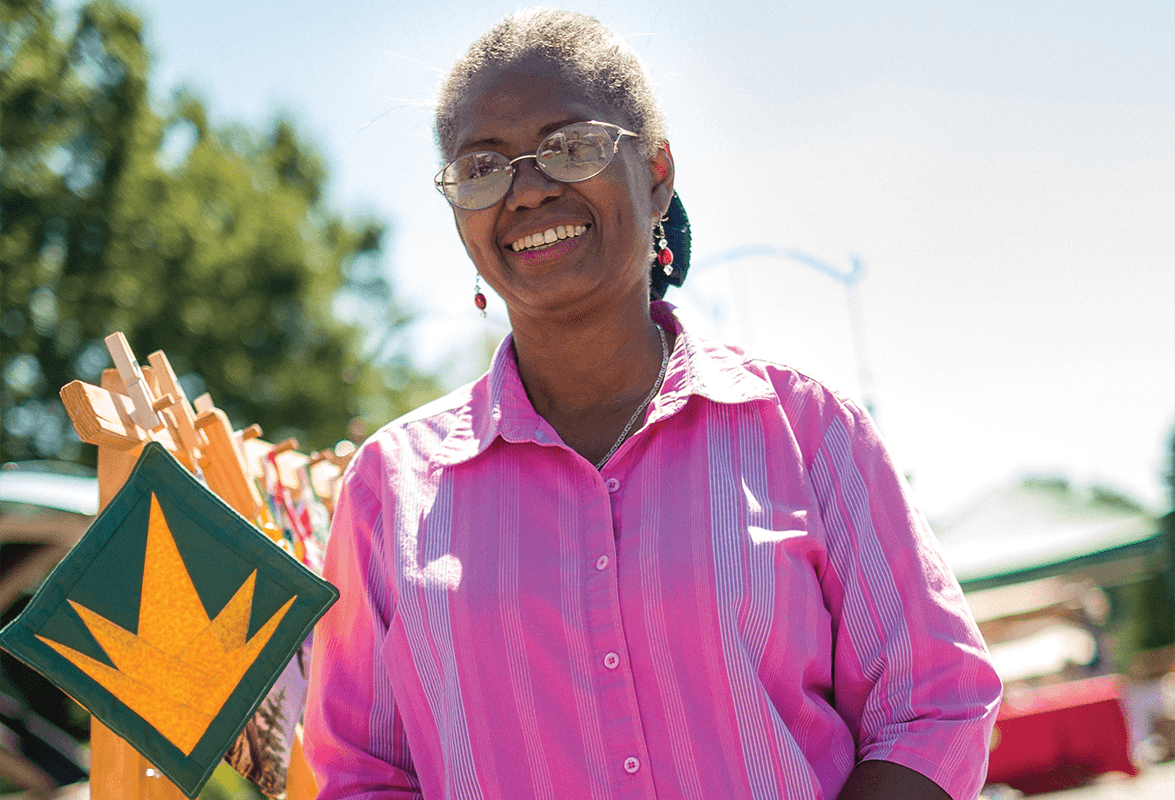 A town the state built

Locals are the lifeblood of Columbus, but it hasn’t always been that way. Unlike many North Carolina cities and towns, which naturally grew as trading crossroads, water ports, or population centers, Columbus was cut from the mountains at the order of an outsider — the state legislature.

The story begins in 1847, when the General Assembly established Polk County from pieces of Rutherford and Henderson counties. Two years later, however, controversy over the location of the county seat led the legislature to abolish Polk County. State Senator Dr. Columbus Mills, a native of the area, led the effort to resuscitate the county, which the General Assembly ratified for the second time in 1855.

To settle the county seat squabble, the legislature authorized three out-of-county men to locate the seat at or near the geographical center of Polk County. The men bought property, divided it into lots, and auctioned it off to raise money to erect public buildings, including the current Polk County Courthouse. The legislature also said that this new, intricately planned town should be named Columbus in honor of Dr. Mills.

Anna Conner can teach you about the county’s history at the Polk County History Museum, just a short walk around the block from the historic courthouse.

Step inside the museum’s glass doors and you’ll see a large yellow-and-black stagecoach, impeccably preserved down to the wicker basket attached next to the bench seat for riders to stow their umbrellas and canes.

“People come in and their mouths drop. It’s just spectacular,” Conner says. “We had to take the front doors off just to get it in here.”

The museum is packed with artifacts, and Conner slowly works her way around the room, pointing out highlights and telling stories about her favorite pieces. There’s a copper still used to make moonshine during Prohibition — and a framed letter from the government giving the historical group permission to display it, so long as it doesn’t work. A little farther in, she stops at a desk that was in the stationmaster’s office in the old train depot. It’s covered with stamps and time schedules and is set against a wall painted to recreate the view a person sitting at the desk would have seen.

Conner can trace her family’s roots in Polk County to 1760. She learned that fact after she retired from teaching and set out to write a history of the county. “That got me in,” Conner says. “I didn’t even know my family history, and now I’m hooked.

“There are so many stories to tell. If you wanted to describe a perfect small town, Columbus is that.

“It is the real Mayberry. With more history,” she says. 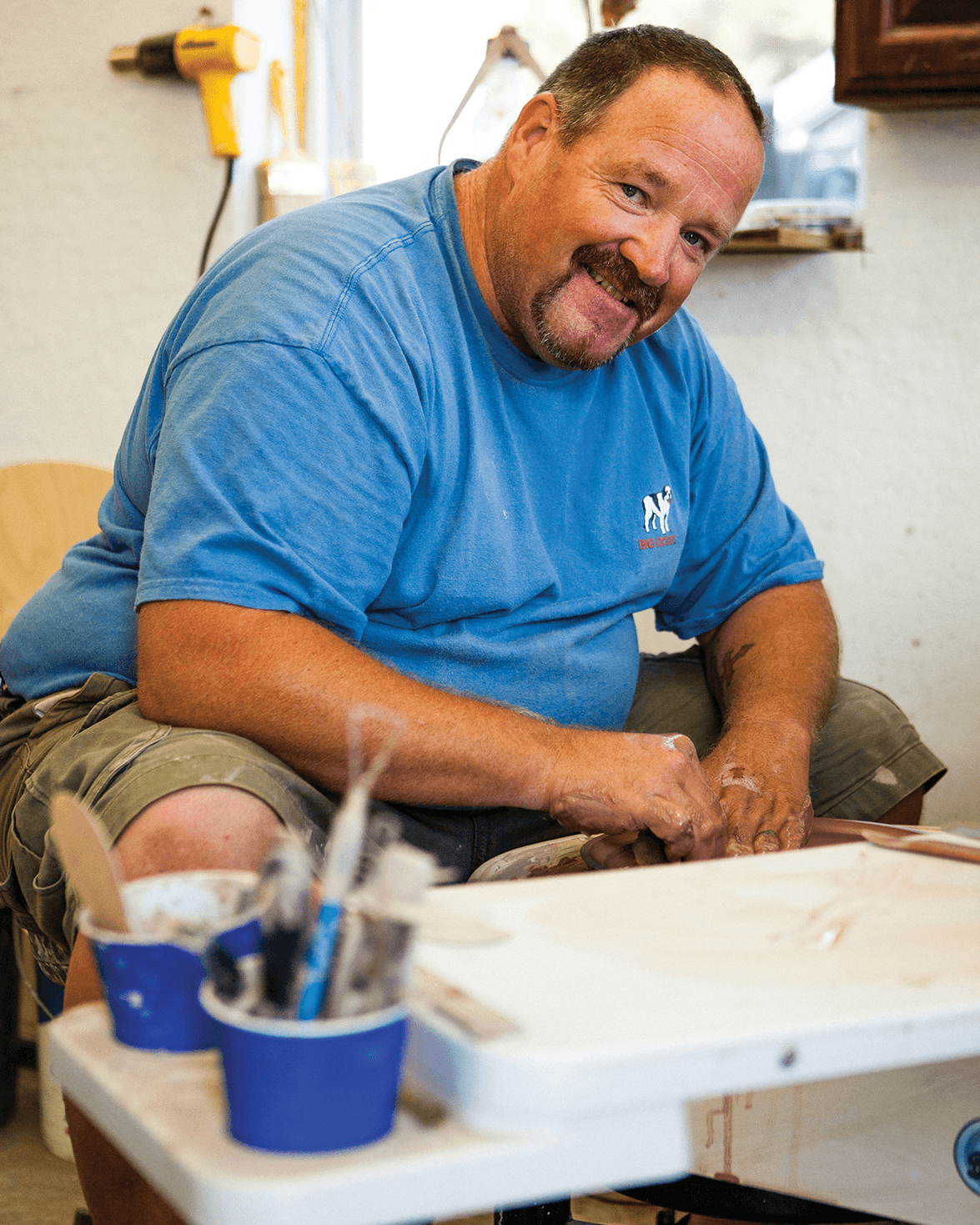 ‘History, as told by flags’

About a five-minute walk from the history museum, in a square brick building that once was a firehouse, Paul Sutherland is leading a tour of The House of Flags, a museum dedicated to the pieces of colored fabric that represent states, countries, and presidents.

Sutherland, a retired rear admiral wearing a khaki safari shirt and plaid shorts, directs a group of eight visitors through the first room, which is dedicated to the Revolutionary War period. “I could talk forever about these flags, but I won’t,” he says. “We’ll be here all morning anyway.”

Sutherland points out a white flag, North Carolina’s first, with a gray hornet’s nest attached to a branch and three hornets above the date May 20, 1775 — when Mecklenburg County declared independence from the British. “There’s all kinds of stories in this museum,” he says with more than a touch of pride. The visitors tilt their heads and crane their necks as Sutherland talks.

Nearby, Robert Williamson, the chairman of the museum, looks on. He interrupts Sutherland: “Make sure you show them the rattlesnakes overhead,” he says, referring to a series of flags that evolved into the popular Gadsden Flag — bright yellow with a coiled rattlesnake and the words “Don’t Tread on Me.”

Williamson has the genuine enthusiasm of a schoolboy that belies his 66 years as he tells you that Francis Hopkinson, not Betsy Ross, made the first American flag, and that the state of Ohio’s flag is not technically a flag but a pennant.

His eyes widen and the creases on his face rise and fall when he tells stories about the museum’s flags — more than 300 of them, including all 27 iterations of the Stars and Stripes. “Some flags are really beautiful and some flags are hideous,” he says. “Some flags tell a story that is memorable, and some tell a story you wish you never heard.”

Williamson is especially passionate about the president’s flag — a navy blue standard with 50 stars and a bald eagle holding arrows and an olive branch. Last year, he arranged to have all six of the flags that were in the Oval Office during the Eisenhower administration brought to Columbus to be displayed together. “We teach history as told by our flags. We wrap the stories around what was happening in that era.” 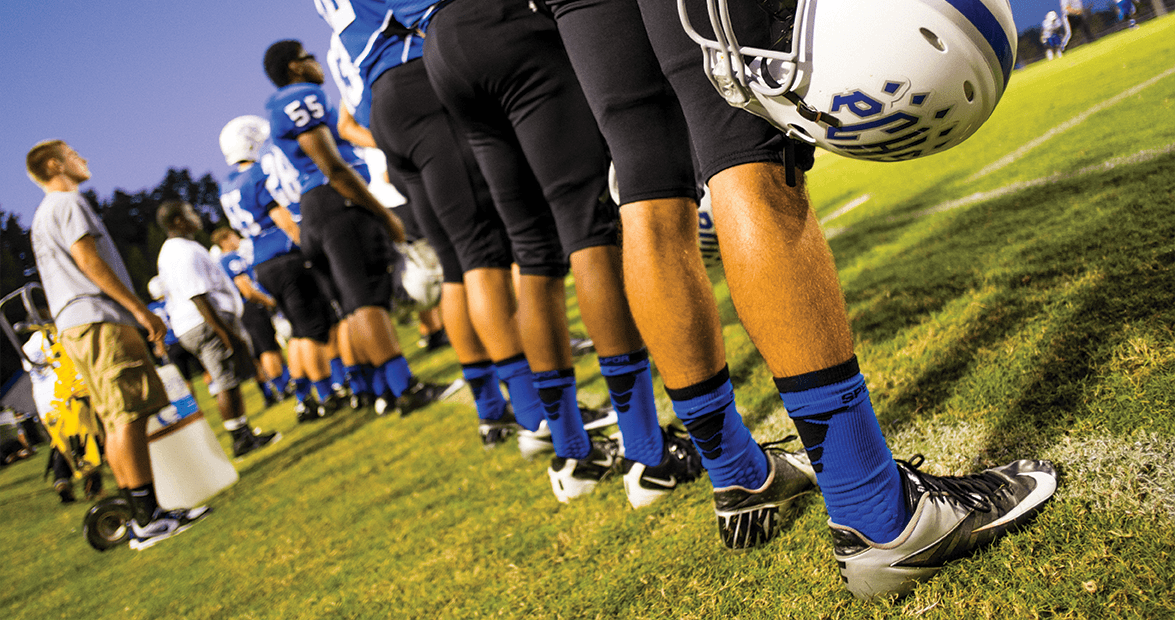 Everyone needs a niche

In the end unit of a strip of shops, next to a home furnishings store, Pat Overholt walks from table to table, checking on the diners at his family’s restaurant, Southern Manners. The tables are full and there’s a line seven people deep at the counter waiting to order. The special — a biscuit with sausage gravy, eggs, and coffee — is a hit.

Pat and his wife, Trish, opened the restaurant in the spring, and all of their four children help out. “It was a longtime dream of ours to do something like this,” Pat says. He’s sitting in a booth at the front of the dining room, looking out a window onto Mills Street in the heart of the perfectly drawn downtown. “Columbus needed a place like this,” he says. “It’s something no one else has. People used to pull stuff out of a can and heat it up.”

The family moved here from Florida in the mid-1990s. Across the restaurant, on a wall, is a large photo that’s been printed on canvas. It’s from the Overholts’ eldest daughter’s wedding. Everyone in the picture wears a beaming smile. It’s the first thing diners see when they walk in the room.

Pat looks over at the picture and smiles. He straightens his maroon apron.

He lives a satisfying life here in Columbus, surrounded by his family, friends, and customers.

Everyone needs a niche, he says. Columbus is his.