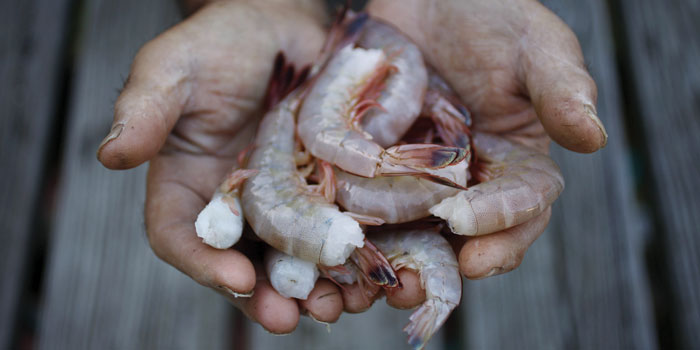 Galloway, the captain, knows the life cycle of shrimp, knows that this winter they rode the onshore winds into the shallow estuaries of eastern North Carolina to spawn, and knows that they grew there through the spring. Then, he knows, as the weather warmed the shallow water, the growing shrimp moved into the bigger, deeper, cooler expanses, such as the Pamlico Sound and the ocean. And he knows that by now, by the first of July, they’ve just grown large enough to catch. And he knows he’ll catch them. Galloway boys have been catching shrimp since the early 1900s. That’s the easy part. The rest is out of his control.

The shrimp in North Carolina’s waters — the northernmost waters in the country to harvest shrimp — are mud-dwelling creatures that travel in schools and serve as feed for bigger fish. They’re at the bottom of the ocean’s food chain. But they are the most popular seafood in the country, with each American eating about 4.1 pounds per year.

The people who catch shrimp share some traits with their catch. In the scheme of activities that involves pulling things from the water, shrimping is one of the least romantic. Fishing, for example, conjures images of leisure or memories of days passed on a lake. In every respect, shrimping is work, and it’s meant for people with mud under their fingernails. North Carolina harvests about 10 million pounds of shrimp every year, and depending on prices, that’s usually worth about $20 million to the state’s economy.

In Varnamtown, a community of 500 permanent residents in the southeastern corner of the state just south of Southport, there are eight shrimp boats today. Five of them are owned by someone named Galloway. Danny Galloway, a 67-year-old man with a full, gray beard who hammered every nail in his home, is one of the longest-tenured. This is his 40th season as a shrimp-boat captain.

Maybe this will be a good year. Maybe the second consecutive cold winter didn’t trouble the larvae crop. Maybe the gas prices will drop. Maybe more people will realize that local shrimp taste better, and maybe they’ll buy more of them. Maybe the government will help. Maybe the things Galloway can’t control will take care of themselves.

Probably not. But the beauty of being a shrimper is that each new season could be a good one. But no waterman dares expect it. Better to be surprised than disappointed.

Galloway starts every year in Georgetown, South Carolina, to catch the early run of shrimp in the warmer water. Then, around the last of June, he takes the Andrea Dawn back up the east coast and into the Pamlico Sound. He shrimps five days a week — North Carolina law prohibits weekend shrimping — then docks the boat at Englehard on Saturday and Sunday, and then goes back out for the next five days. Sometimes, he’ll come back south to Varnamtown on a weekend, but that’s rare; it costs $500 in fuel to make the trip.

“If you’re going to survive, you have to have that drive to make it go,” Galloway says. “I’ve seen a lot of beautiful days, and I’ve seen days that were hell. But I’m here.”

Danny Galloway’s father was 58 when Danny was born in 1943. Danny was the 13th of his dad’s 14 children. Danny’s father was a shrimper, and Danny remembers receiving postcards from his dad’s trips to Florida during Christmastime.

Danny didn’t have electricity until he was in the seventh grade. There were only three cars in town when he was in high school. And, essentially, there were two families — Galloways and Varnams. Danny’s wife, Jean, was a Varnam, and she lived two miles away.

“I had to go two miles just to find one who wasn’t kin,” Galloway says, laughing.

Jean and Danny celebrated their 50th anniversary in May. On the day they married, Danny was 17 years old and had 27 cents. He took the quarter and two pennies and tossed them into the marsh. He started with nothing.

When he had success shrimping, he added to the home. He built it in five stages. “I didn’t like the idea of having a mortgage,” he says. “I just waited until we had a good year, and then I added on to it.”

Last year was a good year. The Pamlico Sound was so busy with brown shrimp that Galloway rarely came home.

That meant Galloway brought home about $24,000 in personal income last year as a shrimper. He does carpentry work in the offseason to help bring in a little extra money. He used some to take Jean to the mountains this past winter. They rode from Varnamtown to Boone, about seven hours away. “We spent most of the time just driving around outside of town,” Galloway says, “just talking to the regular people, farmers and all.”

It was a good year.

Jean softly drops a plate of fried chicken on the dining room table and pours a glass of Crystal Light. The kitchen is big enough for 17, something it proves every year at Thanksgiving. The Galloways have three children and nine grandchildren.

Danny is the only shrimper in his immediate family. A few years ago, he asked one of his grandsons, now in college, to go home and tell his parents he was going to be a shrimper. “He said, ‘Papa, I can’t do that. They’ll both die if I tell them that.’ ”

Danny built his first boat from scraps, and it was 52 feet long. Then, in 1984, he decided he wanted a bigger boat, and he bought the Andrea Dawn, an 80-foot-long beast that is the biggest in Varnamtown.

Without a son or grandson interested in the business, and with no new shrimpers looking to buy a boat that size, Galloway knows he’ll be shrimping the rest of his life.

“I guess all I can do is die and leave it,” he says of the boat.

Just about every road in Varnamtown dead-ends at the water. The busiest spot, during the summer, is the dock at the Lockwoods Folly River where Nick and Jackie Varnam have their fish house, Garland’s Fresh Seafood Inc.

Jackie Varnam is the shrimpers’ biggest ally, regularly going to Raleigh to push legislation for them. That’s fortunate for the shrimpers because the Varnams’ fish house and boat dock is one of only three remaining in Varnamtown. Its location, a scenic spot on the water, means that in the open market the land surrounding the business would be more valuable than the business. Less community-minded people than the Varnams would probably sell the place.

And if the fish house left, so would the dock. That might sink Danny Galloway, whose boat is tied to another boat that is tied to the dock.

Nearly 60 years ago, this spot, this dock at the center of this shrimping town, almost washed away during Hurricane Hazel. Galloway was 11 years old in 1954 when Hazel came ashore, pushing the Lockwoods Folly River so far into town that the rooftop of the fish house was underwater. Galloway remembers seeing sinks and toilets and debris floating in Lockwood Folly after the storm. But what he remembers most are the shrimpers, and what they did during the worst of the storm.

They left their houses and jumped on their boats, steering them as the water rose, preventing them from going out to sea and being lost forever, just doing everything they could to stay afloat.

Michael Graff is the associate editor of Our State magazine.