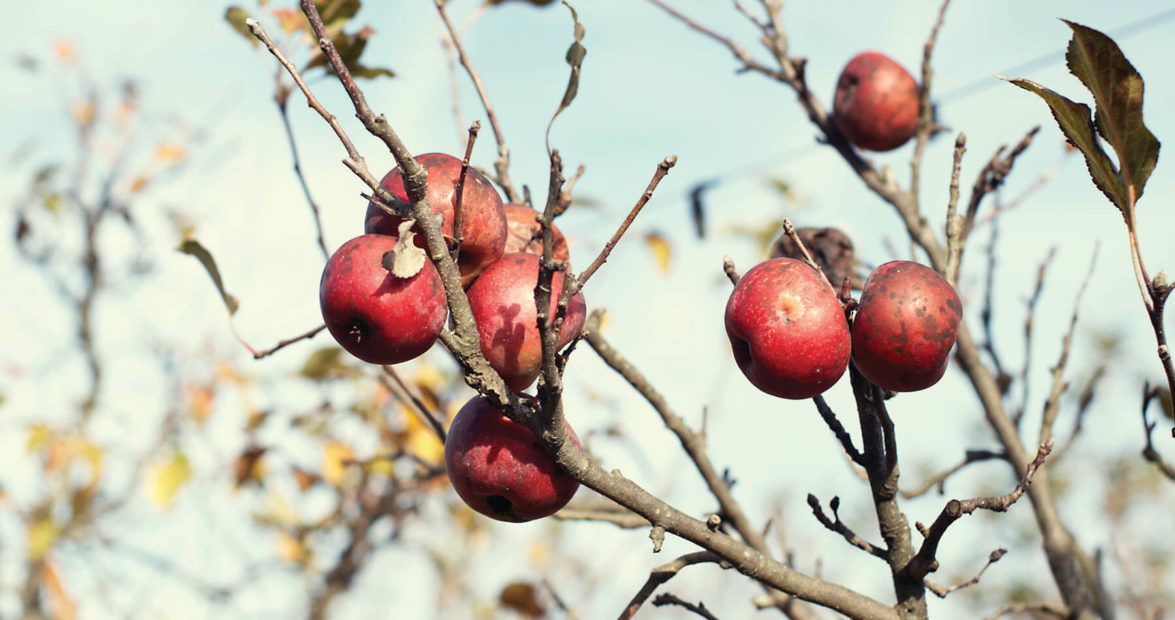 Standing in the morning-damp grass at his Century Farm Orchards, David Vernon listens carefully as a customer names the old Southern apple trees he wants. “Got it, got it, got it,” Vernon says to each choice.

Then he comes across one he doesn’t have in stock. That’s no problem. Vernon, who is a high school chemistry teacher by day, knows apple tree traits like he knows the periodic table. If he’s sold out of a variety, he knows of a suitable substitution.

“A good replacement would be ‘Redfree,’” he tells his customer. “It is a great, sweet apple.” Then Vernon hikes quickly to the trails among his trees to find it. He knows exactly where to find each tree. That’s saying something, considering his orchard holds more than 500 varieties of apple trees that were popular in the South from the 1600s to the early 1900s.

For those who have ordered ahead, Vernon has placed plastic-bagged trees grouped by customer in front of the orchard. If he needs to forage farther back in the seven acres of trees to fill an on-the-spot order, Wesley, his three-legged rescue dog, joins him in the Gator.

Vernon lives in the home his great-grandfather built in 1899 on land in Caswell County that his family owned as early as the 1830s. His grandfather, Stephen N. Rice, who also lived there, was beloved in the community for selling his rural neighbors fertilizer, for encouraging them to buy fire insurance in the 1950s and 1960s, and for loaning them money if they hit a rough patch. “He lived with faith in the people in the community, and he trusted them,” Vernon says.

As a teenager, Vernon walked with his 80-year-old grandfather along the farm’s Country Line Creek and Burton Woods, and he says, “That’s special when you’re able to walk with your grandfather on land where generations of your family have lived and taken care of the land.”

When North Carolina sought to document century-old farms, Rice asked Vernon, who was in high school then, to write down the history of the farm and his family, even though Rice could have written it himself. He never came right out and talked about the future of the farm, but Vernon suspects his grandfather understood the seed he was planting during their time together.

Vernon left for college at North Carolina State University with plans to become a meteorologist. Although he comes from a family of teachers — his father, Cy, taught vocational agriculture and was active in Future Farmers of America; his mother, Janice, taught special education; and his brother, Patrick, teaches in middle school — Vernon says, “I did not want to teach after I left high school.”

When his grandfather died in 1990, the pull of his family’s farm was inescapable for Vernon. “It’s just a sense of place for me,” he says.

In order to have a career that would allow him to live on the farm, he switched his major to science education, and now he teaches chemistry and physics at Western Alamance High School.

When Vernon moved to the farm in the mid-1990s, only a handful of apple trees his great-grandfather had planted remained. During a storm, a Sweetnin’ apple tree blew down, and Vernon sought help from Lee Calhoun, nationally known for his expertise in old Southern apple identification and preservation. Calhoun taught Vernon how to graft the apple tree and gave him most of the varieties he cultivates today.

Vernon began grafting and growing old Southern apple trees out of need: He had to supplement his teacher salary so that he could afford the farm’s upkeep. He grafted 40 trees the first year.

“It went from a hobby to a business,” Vernon says.

He sells several thousand trees a year. Most are grafted from his stock, but he also grafts trees for customers who want to save longtime family apple trees.

The former tobacco fields have taken to their new role. A nursery requires a special type of soil, explains Vernon, “and the farm had it. It’s perfect for apples.”

Every Saturday in November, Vernon turns his orchard into a classroom. Customers cluster around a white paper-covered table that displays more than 100 different old Southern apples in all hues of red and gold, with names like Shockley, Pink Lady, Summer Banana, Ralls Janet, and Spigold.

Inside the pack-house-turned-apple-store are Tupperware containers filled with slices of Blacktwig, Goldrush, and Stayman — more than 20 varieties — for visitors to taste: crispy wedges that leave a tart memory of their freshness after the crunch. Stop by early to purchase his Aunt Grey Smith’s fresh fried-apple pies or apple cake baked by his cousin, Cynthia Wrenn. He has chilled cider to sip, and he offers orchard tours, too. Any apples left from the fall harvest are for sale.

Just outside the pack house, he dug a hole to show the size, depth, and shape of the perfect transplant hole, which is conical so that the tree won’t sit in standing water. Overturned black plastic pots hold signs warning, “Do not fertilize during first year,” and offering a “Free planting guide.” Like any good teacher, Vernon wants his customers — his de facto apple students — to be successful, and he provides them with as much information as they can absorb.

And everywhere they turn, they’re likely to run into one of Vernon’s family members. His parents handle the grafting here, and his brother is indispensable conducting sales during the open houses. Cousins and close friends help wherever they’re needed, and everyone who’s working on any given day looks forward to the hot lunch his mother brings, especially her blackberry pie.

“I just think our family — all of us — our family has a desire to help people,” he says. “It’s important that you match your need to help other people with the special talents that you have.”

Heirloom apples offer a tremendous variety in taste, texture, and use that is no longer available in most stores. Different varieties are grown for drying, canning, baking, preserving, and eating fresh off the tree, and all are intertwined with life in the South.

“These apples are our history,” says Mark Danieley, horticulture extension agent for the North Carolina Cooperative Extension Center in Alamance County. “I think it’s terribly important to preserve these apples. Once we lose them, they’re gone forever.”

Vernon has become a crucial supplier of heirloom apple trees throughout the state.

“I just like doing something different all the time,” he says. “I like being able to explain things to people in a way that’s easy to understand and interesting. I really think if you’re a good teacher, you can teach anything.”

A typical day starts at 6 a.m. when he wakes up and heads to school to teach. He’s the elected chairman of Western Alamance’s school leadership team, and he is a backbone of the school, says Principal Todd Stephan.

He’s back at the orchard by 5 p.m. doing whatever apple chores need to be done: weeding or picking apples if the weather is nice, answering phone calls and emails every day. His customers’ family stories often link to the apple trees they seek. “When people call me about apple trees, it’s always a conversation,” he says.

After dinner, he works on apple business until nearly 9:30 p.m., then switches back to schoolwork to prepare for his next day.

“It’s not a convenience thing; it’s not easy,” Vernon says of the two full-time careers he has managed to merge into his life.

He senses his grandfather’s presence in the orchards, in the fields, and in the earthy scent of fall’s fresh fallen leaves.

“My grandfather loved to walk this farm,” he says. “It doesn’t matter where you are, everywhere is where he was.” Sometimes it seems like his grandfather is still gently urging him in the right direction, just as he did when he asked him to tell the farm’s story.

Last year, Vernon was digging a hole near an old shed, and his shovel struck a rock. He opened the shed to look for something to help break the rock and found three pieces of metal that had been used for just such a challenge.
“I didn’t know I had it until I needed it,” Vernon says. “It happens a lot.”

Open Houses at Century Farm Orchards are from 9 a.m. to 4 p.m. every Saturday in November. For directions, go to centuryfarmorchards.com or call David Vernon at (336) 349-5709. The orchard is not open for tours the rest of the year; trees are shipped UPS from November to early April.