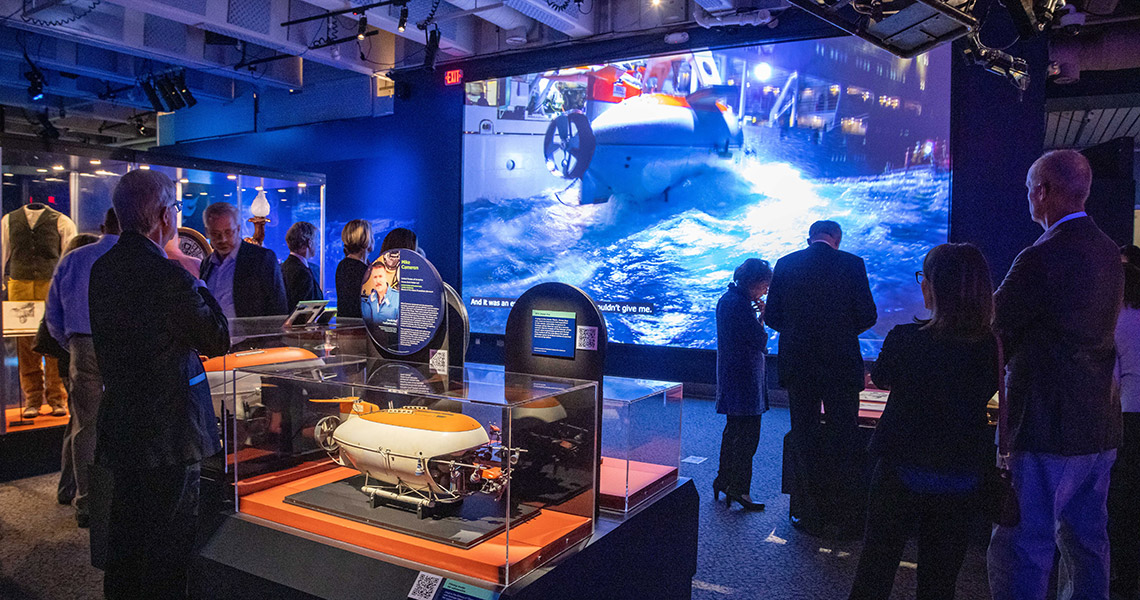 Nearly two-thirds of our planet is covered by ocean, but we’ve only explored five percent of our seas.

“We know more about the surface of Mars than we do the ocean,” says Megan McCuller, the North Carolina Museum of Natural Sciences’ collections manager for non-molluscan invertebrates.

One unlikely oceanic pioneer? James Cameron. The Academy Award-winning Titanic and Avatar director harbored a lifelong passion for diving, which crossed over into his filmmaking through his movies like Titanic and The Abyss. In the film Titanic, the actual footage of the titular wreckage was captured by Cameron and his crew’s cameras as they explored the ship’s remains in submersibles nearly 12,000 feet below the ocean’s surface.

“James Cameron – Challenging the Deep” traces explorer and filmmaker James Cameron’s passion for deep-ocean science, technology and exploration, including his record-breaking dive to the bottom of the ocean in the DEEPSEA CHALLENGER. Tickets on sale now. 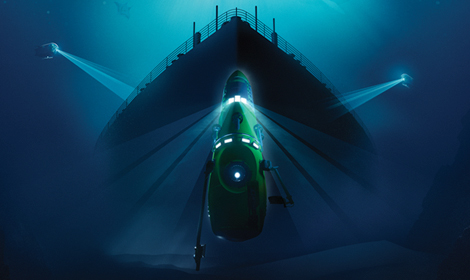 Since then, Cameron has completed several successful benthic excursions, including becoming the third person to reach the deepest known point in the world’s oceans: the bottom of the Mariana Trench. He made this journey of nearly seven miles straight down in a vessel that he both designed and manned, DeepSea Challenger.

From October 15, 2022, until May 7, 2023, visitors to Raleigh’s North Carolina Museum of Natural Sciences can immerse themselves in a special exhibition, “James Cameron — Challenging the Deep.”

“Cameron is a stickler for detail,” says Museum Director Eric Dorfman. “You’ll see this level of detail throughout the exhibition.”

Details like the meticulous and lifelike pencil drawings Cameron himself illustrated for Titanic’s character, Jack, to draw on the doomed boat, which are included in a number of props from the film. In addition to costumes — including the famous “Heart of the Ocean” necklace — the exhibition reveals small-scale models of the film’s set, stories from the making of the movie, and footage gathered from Cameron’s Titanic dives.

With sweeping screens displaying select footage from Cameron’s dives, visitors feel immersed in the deep sea while they explore the exhibition. They can walk through a model submersible holding artifacts and historical footage of early submarine excursions. They can experience Cameron’s wonder of diving to and investigating the site of the Titanic and the German battleship Bismarck. The massive battleship became the final resting place for more than 2,000 men when British forces sank it on its way to occupied France in 1941. The ship, upright and almost completely intact, lies 15,000 feet below the water’s surface. 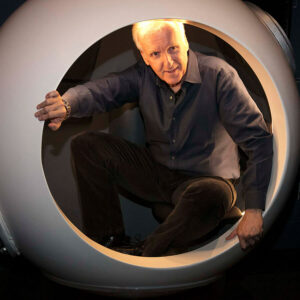 In addition to footage and props, Cameron’s “Challenging the Deep” exhibition reveals how intertwined science and art really are. Together, these artifacts of science and Hollywood also show how imagination can power real discoveries and how discoveries can power one’s imagination. Cameron, inspired by the mysteries of the deep sea, wove the ocean into many of his feature films. Similarly, inspired by the wonder embodied by his creative work, Cameron designed a submersible capable of reaching the deepest point in the sea.

Throughout the exhibition, visitors will also find other treasures from the deep sea, including preserved marine creatures, some of which look more like extraterrestrials from one of Cameron’s movies than fellow earth-dwellers.

Deep sea dives aren’t for the claustrophobic, and at the exhibition’s end, you can test your mettle by squeezing into a replica of a pilot sphere for a submersible. Imagine yourself far from help, sinking deeper below the water’s surface as you curl up inside the sphere. 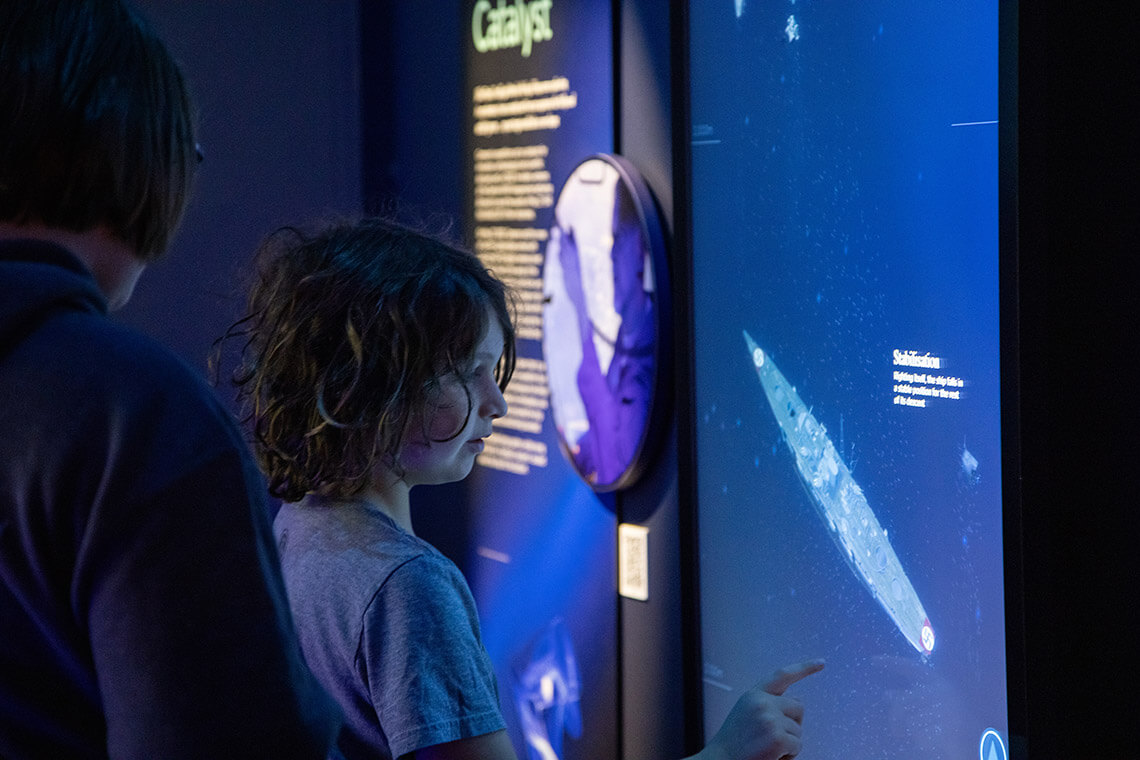 Throughout the James Cameron exhibition, kids can explore the ocean with a hands-on approach. Photography courtesy of NORTH CAROLINA MUSEUM OF NATURAL SCIENCES

The North Carolina Museum of Natural Science is the perfect place to ease each of us into such a fantastical world of sea creatures and explorations. Though an anchor of downtown Raleigh, the museum is filled with North Carolina’s natural wonders.

Because the state spans from the mountains to the sea, and because our coast hugs the continental shelf, where the ocean’s floor rapidly drops from about 600 feet to more than 2,000 feet deep, North Carolina offers a plethora of varied natural habitats and resources, each one as wondrous as any cinematic imagining.

The museum lays these habitats and the creatures that live there out for visitors to explore. Visitors can take a ramble beneath whale bones or stand agape at an indoor waterfall. They can point out living salamanders hidden in mosses or glass lizards peeking up beneath sandy soil. They can watch a 3-D movie about nature, see the tremendous impact humans have had on our state and the planet, and learn how to foster the amazing life our state harbors. They can even journey through time along a pathway that reveals dinosaurs and other prehistoric life that once roamed this region. 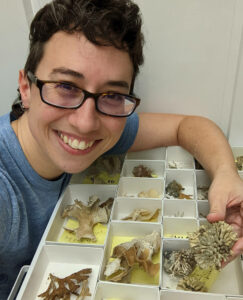 All along, visitors will find real scientists at the top of their field performing real research in laboratories throughout the museum. Scientists like Megan McCuller, who studies tiny oceanic animals called Bryozoans. One of only three Bryozoan experts in the United States, McCuller keeps an eye open to the same deep sea that Cameron travels, and she works to make sense of some of the specimens found there. She does this through her work with these minuscule creatures, where she is discovering just how connected we are to the rest of the world.

For one research project, she examined the tiny sea life found on flotsam washed ashore in California from a tsunami in Japan. “We found many creatures survived the whole journey,” she says. “Which is pretty amazing.”

Just as a tsunami in Japan can impact the United States coastline, our own actions in North Carolina can send their own waves across our planet. The James Cameron exhibition and the museum both work to challenge us to understand the meaning of our own actions.

Like Cameron, McCuller and the museum’s other researchers’ work is fueled by wonder. The museum’s exhibits and mission captivate and inspire. Unlike “Challenging the Deep,” which is here only for a short while, the rest of the museum represents a wild world that belongs to us forever — as long as we work to keep it.