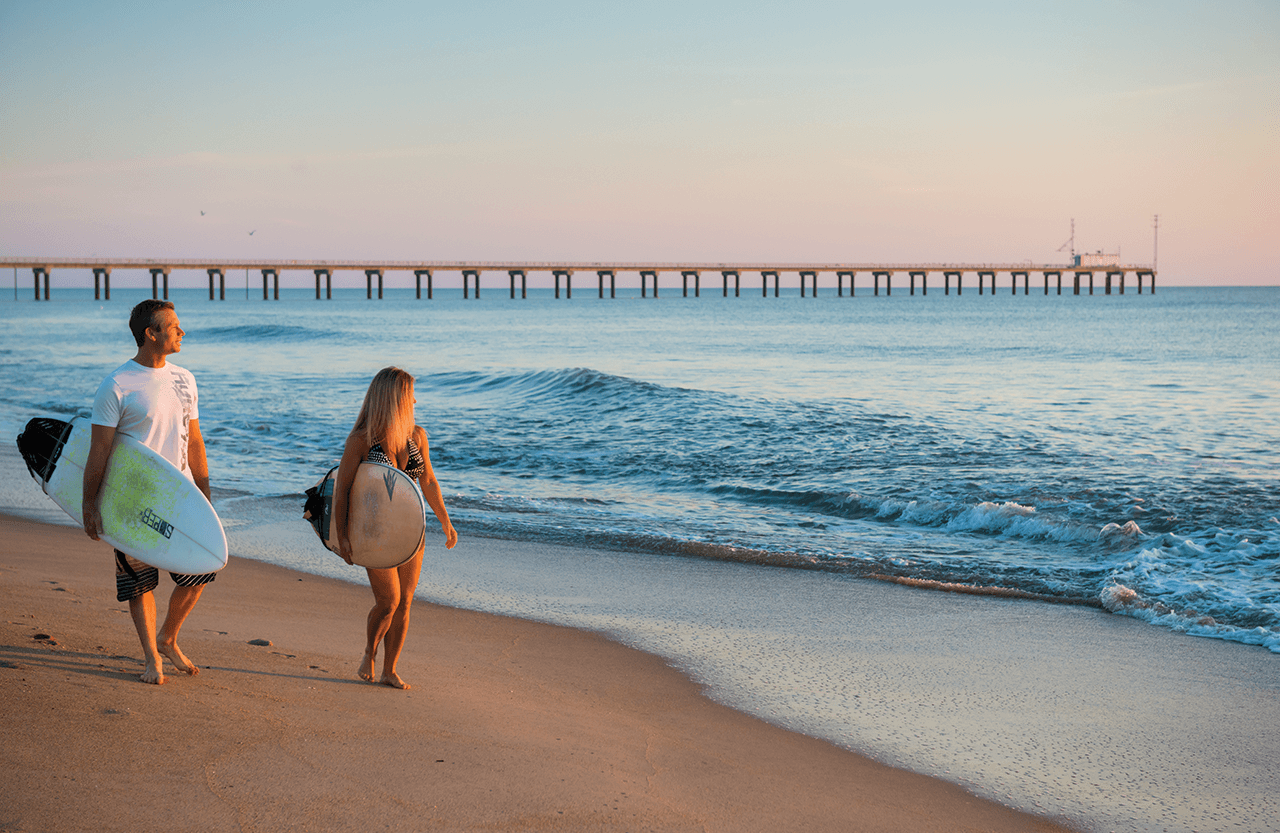 A sinking sun had made the sky flush with purple and mauve by the time we reached the water tower along Duck Road. A hulking thing, that water tower. Painted a pale blue and shaped more like a silo, it’s stamped with the Dare County seal and, in black capital letters, the word “DUCK.”

Toward the westering sun, beyond the tufts of marsh grass, Currituck Sound spreads out as placidly as a pool during adult swim. The water reflects the rouged sky with an almost mirror-like perfection, making heaven and earth appear as one molten body.

Silas, my 6-year-old son, makes no mention of the water-and-light show. We check into our room at the Sanderling Resort, where a complimentary burlap bag of s’more ingredients sits waiting on the table. We have dinner at the resort’s Lifesaving Station Restaurant (plump, buttery scallops and succotash for me; popcorn shrimp and fries for him). We incinerate our marshmallows to a crusty, black-and-white goo at the Sanderling’s gas-fueled fire pit. We do all of this before Silas remarks on the pink-and-purple sky in a phone call to Mom. Silas: “It was real pretty.”

Sitting there with a s’more in hand, the ocean faintly roaring beyond the dunes, my son’s eyes sparkling by the firelight, I have a moment to say, “for this I have come.” 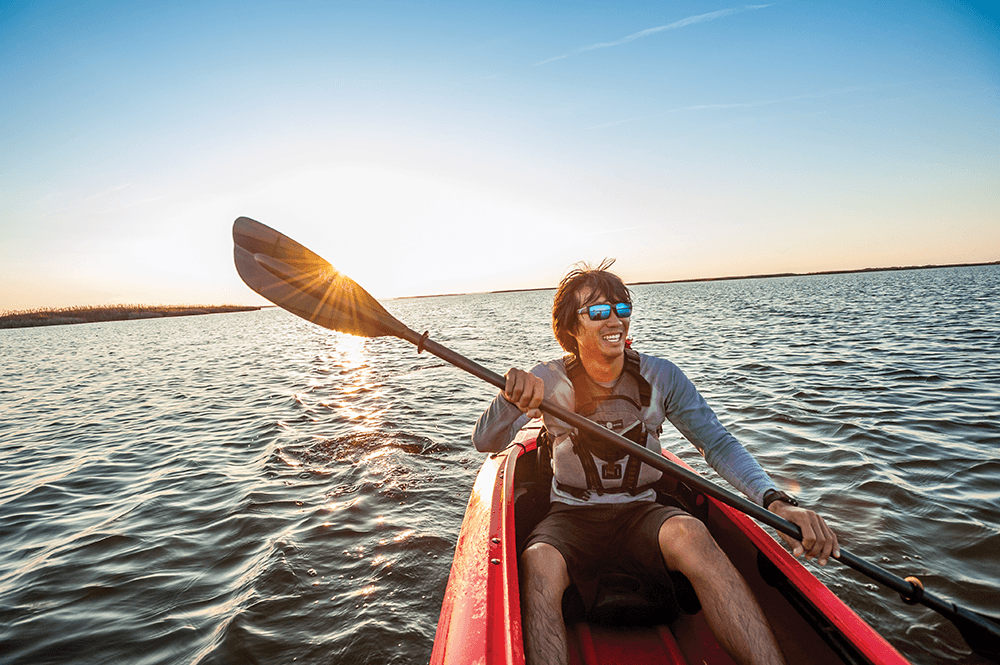 “Everything is called Duck”

We have come, Silas and me, for a father-son getaway to a place with the droll name of Duck, inspired by the plenitude of waterfowl in these waterfront environs. Duck has a year-round people population of just under 400, but that number soars to more than 20,000 during the summer months. Multistory beach houses, the kind built on stilts and painted with cheery colors, fan out like brilliant plumes from sound to sea. Turn off N.C. Highway 12 — Duck Road — and count all the duck-dubbed digs. Viva La Duck. Duck-N-Sea. Duck Inn. Top Duck. Raspberry Duck. Duck Odyssey. Duck Dream. The Striped Duck. Lucky Duck. Silas: “Everything here is called Duck!”

Roosted in the northern reaches of Dare County, Duck is the newest town on the Outer Banks, incorporated on May 1, 2002. That same year, Duck was named by the Travel Channel as one of America’s top 10 beaches. But for most of the 20th century, there wasn’t much more in Duck than wind-stunted loblolly pines, live oaks, dunes, and water — always the water. “It was at the end of the road,” as local John Terry describes it.

In the 1970s, development really began to dig in. “It became hip for some people in the Northeast to say, ‘I’m going to Duck, North Carolina,’ ” says Ronnie Gray, who, along with his siblings, owns a popular chain of clothing and souvenir stores called Gray’s, a “shopping tradition since 1948.” It’s the home of “the Big Duck,” a sunglass-bespectacled quacker who’s splashed on T-shirts and other apparel. And the Big Duck has delivered as the town’s ambassador: “Our Big Duck T-shirts have been seen all over, even in the Boston Marathon,” Gray says. 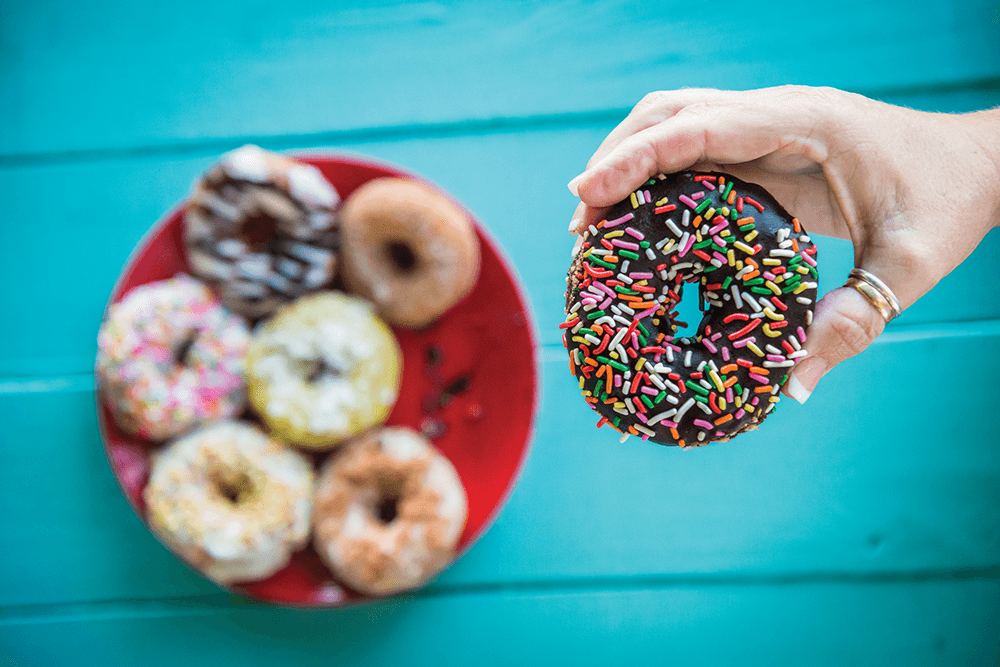 Silas and I keep to a mostly waddling gait around Duck, stepping into a creaky-floored bookstore at a market called Scarborough Faire. We wander into Duck Donuts. “You gotta go to Duck Donuts if you come to Duck,” says Lynn Kirisits, one of the managers, as rings of batter turn bronze in the fryer. “They’re evil good,” she says. She means the doughnuts are divinely delicious. I eat a plain ol’ glazed doughnut — though, really, there isn’t anything plain-tasting about it. The thing melts in my mouth like cotton candy. Silas opts for a chocolate-glazed, which makes for a marvelous mess around mouth and chin.

We quicken our pace down the town boardwalk, strung along on the sound side, where the wind makes raindrops feel like buckshot. Silas: “We’re flying away!”

By lunchtime, and by popular local recommendation, we seek refuge from the bluster inside The Blue Point restaurant. A classy place, The Blue Point, with its plush seats and clientele drinking mimosas in slender glasses. A woman strums a guitar near the bar, singing numbers like “Let It Be.” We take a seat by a window overlooking Currituck Sound, which is now smothered in gray and garnished with whitecaps. Silas: “It sure is pretty out there.” I have the shrimp and grits — superb — and share country ham sliders on sweet potato bread with Silas.

The two of us eat well, sleep well, and laugh a lot in Duck. After all, the town has a quirky quack of a name, though we never spot the first duck call or camo-clad, wader-wearing shotgun toter. This beach town is uptown — but not uppity. It’s a place where you don’t feel embarrassed about skipping a shave or shower, or wearing marshmallow on your mouth. It’s a place where you can unapologetically indulge in beach bliss. 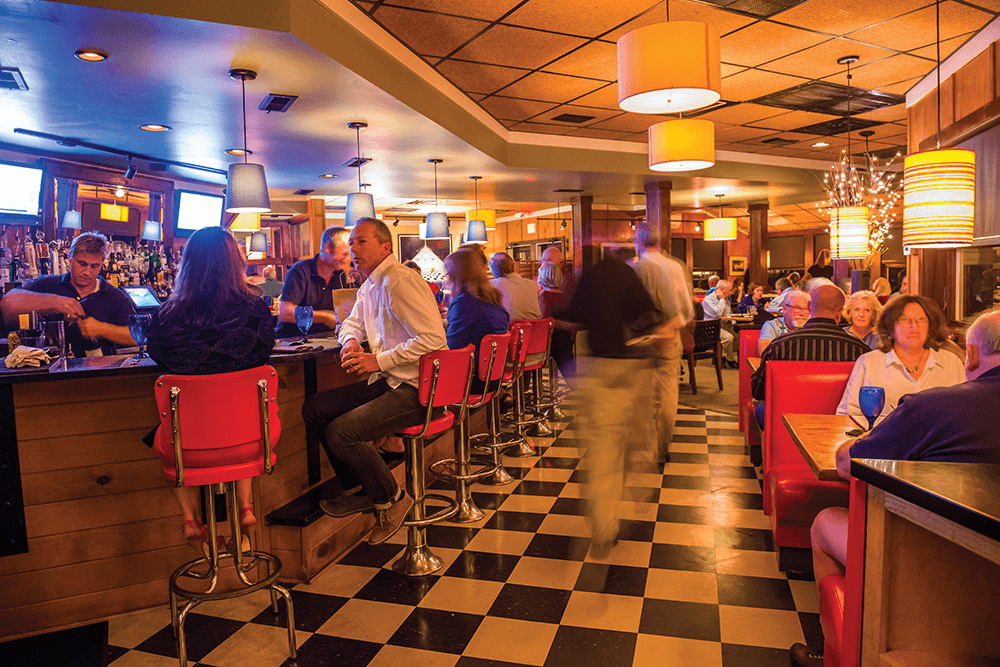 Alan and Lisa Kauchinsky of Maryland exchanged vows at the Sanderling Resort in Duck five years ago. “We got married on the ocean side, and then we had our reception on the sound side. It’s the best of both worlds,” he says.

From the balcony of our room at the Sanderling, Silas and I can view ocean and sound, drinking in sunrise and sunset over water. Down the hall, we could cozy up to a fireplace, in a sofa so soft, and gaze out at the windy beach while feeling all initiative drain from our bodies.

I’m sitting here now, coffee in hand from the espresso bar in the lobby. A row of Adirondack chairs cuts a silhouette on the dunes, the surf surges, the horizon sweeps clear to Casablanca, the Azores, the Strait of Gibraltar. Silas: “I really want to come back here, Daddy.”

For this I have come.