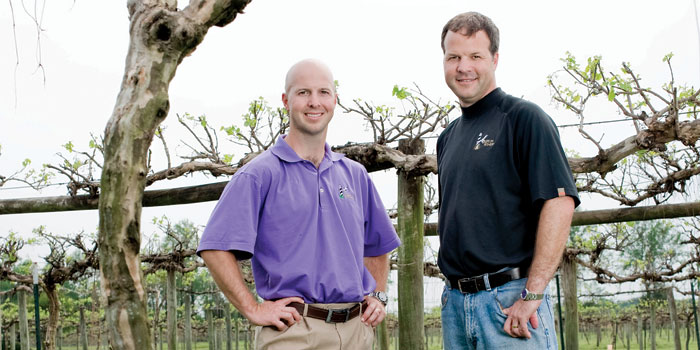 Down east in North Carolina it’s hot and humid. The land’s flat and sandy. It’s a place for the strong-willed, blue-collar types.

The sandy soil breeds people who have grit — farmers who take pride in growing something they can call their own.

That same soil also produces native muscadine grapes, one of the sweetest varieties in the world. The grapes of this region are just like the people. They’re tough, with a thick skin. That skin gives them color. It protects the sweetness inside from the region’s harsh conditions. They don’t venture far from their territory. They need the eastern soil to thrive. The heat and humidity give them character.

The people down east also have an air of sophistication, of Southern hospitality. They socialize and drink wine, which they’re proud to call their own.

For 36 years, Duplin Winery in Rose Hill has been turning those muscadine grapes into a sweet, chilled wine. A wine branded by its origins in the top agricultural county in the state. A wine that sells for $7.69 a bottle. A workingman’s wine.

Rose Hill isn’t a destination town. It’s barely even one of those stopover places where beachgoers pause briefly on their 70-mile-per-hour trek down Interstate 40.

But 18 billboards out on the highway beg people to take exit 380 to Rose Hill. They promise a visit that’s “cool, sweet, and easy.” Hardly the experience expected in this rural farm town. Those billboards also sport oversize bottles of Duplin Wine, with its unmistakable label picturing the Hatteras Lighthouse.

Whether it’s because of the billboards or the claustrophobia of a cramped car, people do stop. Ninety-two thousand stopped just last year. They drive past the acres of young, spindly vineyards and turn onto Sycamore Street. They pass the world’s largest frying pan, still greasy from the 365 chickens it fried up last year. And then they find what they’re looking for, the main tourist attraction in Duplin County — Duplin Winery. They might even drive past it and have to turn around.

You see, Duplin Winery isn’t a showplace. It doesn’t have a fancy entrance or eye-catching building. The structure wasn’t built to resemble the architecture in the wine-renowned regions of Italy and France.

The building that now houses The Bistro, gift shop, and tasting room used to be a warehouse before it became the original winery. It’s a product of necessity. That’s what people do here: When something sets them back, they use that challenge to get stronger.

Bettering themselves and making more money to support their families was the goal of brothers David and Dan Fussell when they planted 10 acres of muscadine grapes in 1972. David, a schoolteacher, and Dan, a carpenter, planned to harvest the grapes and sell them to Canandaigua Wine Company in New York, which paid $350 per ton for native muscadines.

But other farmers had the same idea, and the price for muscadine grapes plummeted to $150 per ton. So they did what good Southern boys do: They consulted their dad, Daniel Jerome “D.J.” Fussell. His friends called him Big D.

Big D loaned his sons $70,000 in 1975 and allowed them to use an old warehouse of his as their winery. But the grapes-to-wine process doesn’t come easy. It takes know-how and chemistry. And, like any startup business in a small town, it takes community support.

The Fussell family was, and still is, locally known for its Christian ideals. The idea of this upstanding family opening “a factory of liquid sin” didn’t sit well around town. David and Dan’s mother, Elizabeth, didn’t like her sons’ new enterprise, but she backed them up. When someone in town confronted her about the questionable business, she responded, “Well, we’re not making it on Sunday.” It’s a practice the winery still observes today.

David studied Paul Garrett, a North Carolinian and a leading winemaker before Prohibition. Garrett also used the native muscadine grape to make his wine. David hoped the grape would prove as profitable now as it did at the turn of the century, when it helped make North Carolina the leading wine producing state in the nation, before the 18th Amendment shattered the winemaking industry.

Unfamiliar with wine markets or prices, the novice brothers received a boost from the State Legislature in 1972, when lawmakers reduced the state tax on native table wine from 60 cents a gallon to 5 cents a gallon in an effort to reestablish North Carolina’s wine sales.

With a rough understanding of the winemaking process, a lucky tax break, and 10 acres of grapes, Duplin Winery, the oldest in the state, began.

The Fussell family stomped the grapes themselves. They licked labels to stick on every bottle in the 20 cases they made that first year in 1975. Today, one bottle remains of Carolina Preeminence — the first wine Duplin Winery ever produced.

Thirty-six years later, at noon on a Tuesday, the parking lot at the Duplin Winery visitors center, that same old warehouse where it all began, is almost full. David “Dave” Fussell Jr. hops into his champagne colored Chevy Tahoe. Dave and his younger brother Jonathan are the second pair of brothers to run the winery.

Dressed in a plaid shirt, Dave, 43, talks quickly for a Southerner. Duplin’s story is long, but it’s important to him that people know every bit of it. On his way to the 94,000-square-foot winery, located half a mile down the road from the original, Dave turns on the radio. “Owner of a Lonely Heart” pours from the speakers. Eighties on Eight is Dave’s favorite station. It’s music that takes him back to his teenage years, when he was a hotshot baseball player at Wallace-Rose Hill High School dreaming of being in the major leagues, and to his college years, when he was 75 miles down the road at East Carolina University in Greenville, majoring in economics.

But the 1980s wasn’t the best decade. It started out great. David Sr. bought out his brother’s share of the business in 1978. In 1983, he borrowed half a million dollars to build the current winery, and in 1984, Duplin Winery sold about 40,000 cases. The next year, things changed.

“Some fancy lawyers from New York came down here and said, ‘This tax break is unconstitutional,’ ” Dave remembers, his speech slowing, his enthusiasm waning. The local winemakers fought the legislation but lost in the Supreme Court. North Carolina wineries lost the tax break and profits plummeted.

With a family to support, David Sr. went back to teaching and considered closing the winery. He laid off 25 workers, keeping only two, one being his wife, Ann. It was a difficult thing to do, particularly in a small town. The Fussells ate lunch with these people and attended their family funerals.

The bank repossessed David Sr.’s house, but his father made sure his son kept a roof over his head. “Big D had everything under control,” Dave Jr. says.

Ann believed in the winery. Every time David Sr. mentioned closing the business, his wife refused. “We make the best muscadine wine in the world,” she said.

Although everyone around him seemed to believe, David Sr. sank into severe depression for three years. Dave Jr. remembers his mom calling him at college. “Mom would say, ‘You’re just going to have to come home on Wednesday night,’ ” he remembers.

In 1990, Dave Jr. returned for good. That same year, the winery lost $28,000. But families like the Fussells, rooted in small, hardworking towns like Rose Hill, don’t give up.

Dave Jr. tells the story about the “bad years” as he stands in front of the fully paid off, 94,000-square-foot metal building that can hold 1.4 million gallons of wine. As he walks inside, his voice quickens. This is where he and his family produce the wine that saved their business.

In 1995, things changed again when “60 Minutes” did a special on the health benefits of drinking muscadine wine.

The hot, humid climate — characteristic of regions where muscadine grapes thrive, like eastern North Carolina — produces fungal disease. So grapes, like people, use this challenge to get stronger. Muscadine grapes make extra antioxidants to protect themselves from the disease, so muscadine wine contains seven times more disease-fighting antioxidants than European varieties.

With that demand, there aren’t enough Fussell family feet to stomp the grapes or tongues to lick the labels. Dave walks behind the winery and stands beneath one of four massive, steel balloon presses that together squeeze a total of 5,000 tons of grapes during harvest season in September and October. As he steps back inside, the distinctive, sweet muscadine aroma fills the air. Within the cavernous building, 128 tanks stand, each holding anywhere from 4,500 gallons to 30,000 gallons of wine, all at different stages of the winemaking process. In one corner, the bottling crew monitors the automated assembly line as bottles of Hatteras Red, the company’s most popular wine, receive synthetic corks and lighthouse labels.

The entire operation is overwhelming, but not to Dave. To him, it’s just the family business.

A half a mile away from the hulking winery, Jonathan, Dave’s counterpart, conducts a tasting. Jonathan is 35, eight years younger than Dave. He majored in history at the University of North Carolina at Chapel Hill, but, like his big brother, he decided to return to the family business, too. While Dave supervises the winemaking process, Jonathan oversees The Bistro and the visitors center, charming customers with his Southern drawl. Dave’s loud; Jonathan’s quiet. Dave’s charismatic; Jonathan’s reserved. Dave’s like his mom; Jonathan’s like Big D. But this business takes both kinds.

Visitors perch on stools around the long, L-shaped wooden bar. Jonathan grabs an armful of wines — with names like Pink Magnolia and Carolina Red — from the walk-in cooler. When it’s this hot, no one wants warm wine.

“Muscadines taste better chilled,” Jonathan says. “It brings out their fruitiness.” That fruitiness is the key to Duplin wine. If you close your eyes and sniff, a glass of muscadine wine smells like a glassful of grapes.

Some people snub sweet wine, but that’s OK with the Fussells. They still sell more wine than any other winery in the Southeast. “When you come here, our goal is to treat you good,” Jonathan says. “If you like it, you’re going to buy it.”

So Duplin Winery doesn’t offer any frills. The Fussell family makes sweet wine from the native muscadine grape at their winery in Rose Hill, in the hot, humid, sandy eastern region of North Carolina. These people and these grapes have a tough skin.

“We’re as far away from California as you can get,” Jonathan says. “We sell sweet wines; that’s what we’re good at.”