It wasn’t until I moved here that I learned Krispy Kreme Doughnuts were made in North Carolina – born in Winston-Salem to be exact.

Looking around and seeing that Krispy Kreme outnumbered Dunkin Donuts 2 to 1, I just thought that folks here loved them some Krispy Kreme. They do; we do. And they should, Krispy Kreme doughnuts are an amazing treat, a surefire hangover cure, the perfect post-church snack, and simply delicious.

But really, North Carolina loves Krispy Kreme for more than their taste. Generations of Tar Heels have grown up with them. They’re a source of pride, the food equivalent of the hometown boy done good. The same goes for Pepsi and Cheerwine and Texas Pete and Mt. Olive Pickles.

Statewide, there are hundreds, maybe even thousands, of North Carolina foodstuffs sold in specialty stores, mom-and-pop gas stations, country grocery stores, on roadsides, and at farmers markets. I love to see someone set up selling watermelons out of the back of their truck, or fresh boiled peanuts, or five kinds of homemade jam. The same holds for farmers markets.

At my favorite ones, not only do you have the bounty of the season, you also have the baker’s bounty of bread, pies and cakes; the beekeeper’s jars of honey, the grandmother’s jams and jellies, and the more adventurous offerings that are often unique to the region. 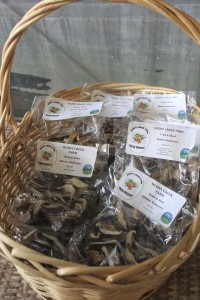 At farmers markets around Morganton, you’ll often find Muddy Creek Farm’s shiitake mushrooms. We don’t have that in Wilmington. For mushrooms, we’re stuck with the grocery store. But even the stores – from Food Lion and Harris Teeter to Lowes Foods and The Fresh Market – are North Carolina companies.

What Wilmington does have is Angela’s Pepper-Pickled Foods. She started by pickling some okra, pairing it in the jar with Fresno, jalapeno, and habanero peppers (for increasing heat intensity). From there, she’s moved on to collards, peanuts (which are fantastic), the three peppers, and more. I’ve watched her presence at Wilmington’s riverfront farmers market grow from a card table with a few jars to a full-fledged setup and a line of eager samplers and buyers.

As someone who writes about food, I’ve accumulated a collection of candies, pickles, barbecue sauces, jams, jellies, cookies, crackers, rubs and seasonings from across the state. From C. Winkler Bakery’s Moravian Cookies out of Old Salem to Bamboo Ladies’ Bamboo Pickles and Slingshot Coffee from Raleigh to a bevy of barbecue sauces from Greenville, Asheville and Charlotte, I have a pantry chocked full of North Carolina food. In my refrigerator and at my bar, you’ll find North Carolina well represented as well – Mother Earth Brewing’s Dark Cloud, Duck-Rabbit’s Milk Stout, Childress Vineyard’s Three White, Cardinal Gin, Covington Sweet Potato Vodka.

As great as these born-in-North-Carolina foods are, to me there is often one extra ingredient that our homemade efforts have over them: love. My friends ask for my barbecue sauce because it’s made with a little love – for the food, the making of the sauce, the friendship.

A friend contacted me on Facebook at the end of summer. He told me his wife would be in town, and asked if we wanted to have her bring up some homemade fruit butter? Of course. When she arrived with a brown paper bag filled with jelly jars and gave me a jar each of blueberry butter, cherry butter and peach chutney, I couldn’t have been happier. When I got home and tasted each, they were great. Why? The flavors, certainly – and also the skill in making these – but the love; that’s what made the flavor for me, and what drove her to make them in the first place.

Jason Frye lives in Wilmington and is a contributor to Our State Eats. He has written for Our State Magazine, Haven, North Brunswick Magazine, and Wrightsville Beach Magazine.