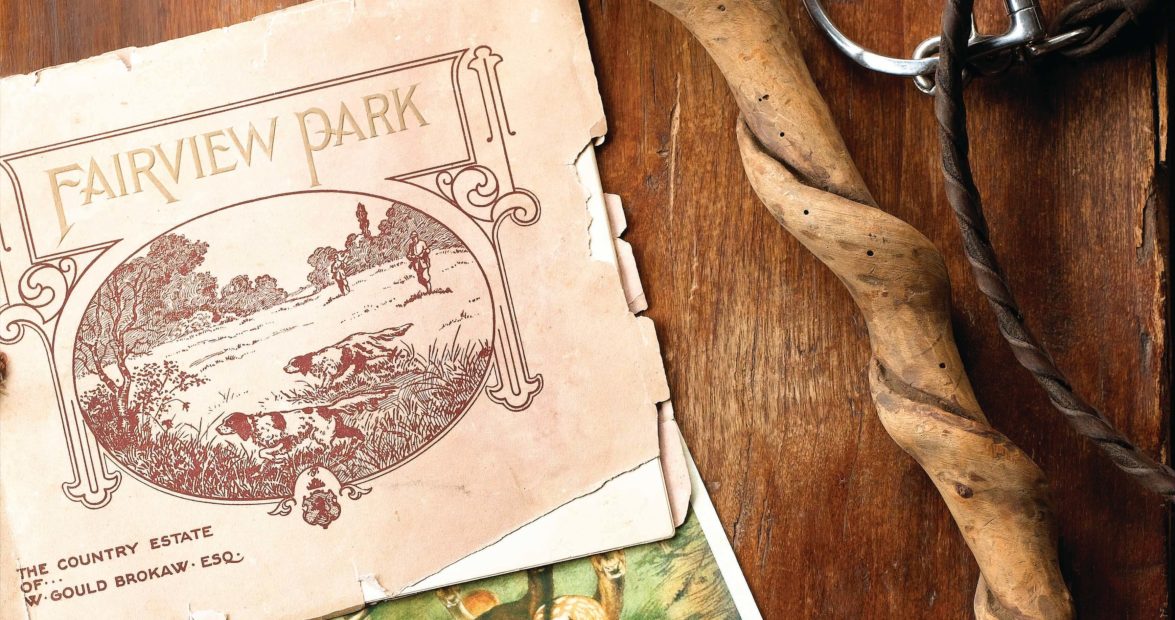 When the Manor House at Fairview Park went up in flames on the night of March 31, 1921, a crowd gathered in the Randolph County countryside to witness a light-and-sound show unlike anything in the county’s history.

A spectacular blaze razed one of the area’s most spectacular private structures of the era. Although it stood only two stories tall, The Mansion, as the local folks called it, measured 160 feet from end to end and 54 feet from front to back, amounting to more than 17,000 square feet of living space. And that’s not counting a sun parlor that spanned the length of the house at the rear and a squash court, bowling alley, rifle range, Turkish bath, and swimming pool in the basement.

“The flames were discovered near the center of the building and were making remarkable headway when discovered,” reads an article about the fire published in the April 7, 1921, edition of The Asheboro Courier. “The pump which supplied water for the lodge was in High Point for repairs, making it impossible to obtain any water power.”

The story notes that fire consumed tapestries, rugs, and statuary, many of which the owner imported from Europe, as well as the luxurious trappings in a music room, a trophy room, and a gun room containing firearms of every description, ancient and modern.

“The explosion caused by cartridges and other ammunition which had been stored created much excitement by the throng who congregated,” the story continues.

In 1896, William Gould Brokaw, a dashing playboy of the Gay Nineties, began developing his country estate called Fairview Park. Over a course of 15 years, he spent a half-million dollars buying land and building the winter retreat, using private preserves in Great Britain and other European countries as templates for his sportsman’s paradise.

In the beginning, he built a modest house on 100 acres about eight miles from High Point. Eventually, he added a Swiss chalet, cottages, farmhouses, cow barns, a stable large enough to house 35 ponies, and a private flag station called Fairview Park, just south of Trinity and three miles from the Brokaw estate on a rail line from High Point to Asheboro.

During the park’s glory days, Brokaw owned about 2,500 acres enclosed in six miles of fencing; he leased an additional 30,000 acres so he and his high-society guests could enjoy unfettered shooting access across miles of undulating terrain where they could hunt pheasant, quail, and ducks. They also enjoyed golf, polo, and trapshooting.

Brokaw was the grandson of railroad magnate Jay Gould, one of the 19th-century industrialists known as robber barons, and the son of William Vail Brokaw, a successful New York clothier. He liked fast horses, cars, yachts, and motorized boats.

According to more than one newspaper report, financial troubles following World War I forced Brokaw to turn his private playground into a deluxe club for well-heeled sportsmen. A 32-page advertising booklet — undoubtedly targeting consumers who could afford $25 a day to hunt — tells the story of the park and its patron in photographs, illustrations, and lofty descriptions:

“The story began 20 years ago when, attracted by tales of superb game shooting and kindred sports which had drifted north into the circles of Newport and Tuxedo, W. Gould Brokaw, seeking a hazard of new sporting fortunes, dropped off the train at the little town of High Point, North Carolina.

“The spot was very close to the primitive, and the inhabitants looked with suspicion upon the stranger. The rancor of war days had not yet disappeared, and these southern farmers still found it hard to accept the hand of the northern man, no matter how friendly the spirit with which it was offered. The visitor, however, went about his recreations as if his welcome was beyond question. He met his neighbors cordially and on an equal footing. He hunted, and finally departed greatly impressed with the Arcadian spirit of the mountain region. Next year he returned and renewed his acquaintance with the people of Randolph County. The charm of the woody hills and the marvelously pure and tonic air, the crisp days and the cool quiet nights, finally became so attractive that the transient visitor decided to build a permanent home.”

The Manor House must have been magnificent. There were two large guest rooms on the first floor and 13 double rooms for sleeping, along with Brokaw’s private suite, on the second floor. The dining room seated 40. The main hall, or living room, was 40 feet wide, with a polished oak ceiling and wainscoting, flanked by large, open fireplaces on each end and decorated with red, heavy velvet pile rugs and red draperies.

Next door to the living room was the billiard room, another lounging space of more than 1,000 square feet, with divans, player pianos, and music boxes. A library and gymnasium connected to the billiard room. The 800-square-foot gym had a ceiling and wainscoting like the living room, but the floor was fashioned from narrow strips of hard, polished maple, suitable for sport but adaptable for ballroom or theater purposes. The space contained “punching bags, chest weights, rowing apparatus, foils and masks, dumb bells, boxing gloves, and everything necessary in a fully equipped gymnasium.” The basement swimming pool was supplied with artesian water heated by steam jets, according to the advertising booklet.

“The pool, together with the squash court, the gymnasium and the other opportunities for both indoor and outdoor recreation, makes Fairview an ideal place for the entertainment of large house parties or for club life. It is doubtful if any other winter home in the South is equally well equipped for this purpose.”

According to the booklet, training the canines proved easier than educating the local residents:

“It must be understood that the keynote of the entire project was sport outdoor, clean and natural sport with game hunting as the principal feature. Everything revolved around this central idea, and a necessary part of it was the instruction of the small farmers on the adjacent lands. This task, difficult at first, was finally consummated through the exercise of tact, patience, and a democratic treatment of Fairview’s neighbors. The final result was the entire rewriting of North Carolina’s game laws by Mr. Brokaw at the request of the Governor, and the intelligent observance of the laws by the inhabitants.”

Perhaps the booklet writer embellished a bit in the bid to entice paying customers, or perhaps the climate has changed dramatically in nearly 100 years.

“Mr. Brokaw’s success in the highlands of North Carolina has encouraged other representative Americans to build their winter homes in its salubrious climate, and now within a few miles of Fairview Park are located estates owned by George J. Gould, Pierre Lorillard and Clarence Mackay. Like Mr. Brokaw, they were attracted by the ideal hunting possibilities and a climate which, resembling that of France and Italy, has an average mean temperature of 59 degrees; seldom rising above 78 degrees in summer or falling below 43 degrees in winter.”

No doubt, many rich and famous visitors passed time at Fairview Park, and at least one was destined to become famous. A writer named O.M. Smith tells of the time a young Franklin D. Roosevelt, fresh out of Harvard, was a houseguest. In a July 1938 article in The Asheboro Courier, Smith wrote that a man named George B. Craven of Trinity and High Point had recently written to Roosevelt and reminded him of the day, 30 years earlier, when Roosevelt had perched upon a powder keg to watch a sandlot baseball game in Trinity.

“The youth who was to become President of the United States,” wrote Smith, “used to ride a pony to Trinity for his mail, and while there, was wont to pause and exchange small talk with the village folk. On one occasion, young Mr. Roosevelt, watching a ball game, threw a one-dollar bill into the hat that was being passed around for contributions to the team, causing a great deal of comment among the spectators.”

Smith reported that Roosevelt himself recalled those days in a speech made from the rear platform of his special train here, when he jokingly remarked that he had shot at a lot of birds in this county.

Brokaw did not rebuild after the fire. Eventually, his holdings were subdivided and sold. A 468-acre parcel was offered at auction on November 26, 1924. “This is the nucleus of one of the finest estates and hunting preserves ever developed in the state,” reads a newspaper advertisement for the sale. “If you purchase the property, you can go hunting on Thanksgiving Day on one of the most desirable hunting properties in the Country.”

According to a 1968 article in The High Point Enterprise, Brokaw lived out the majority of his later years in Europe, but he spent winters in the South Carolina Lowcountry. He died in 1941 at age 77.

The tale of Fairview Park falls into the category of history.

Brokaw’s sober Quaker neighbors knew that the place was real but viewed his way of life as otherworldly, the stuff of fiction. They tolerated his habits but did not condone them, said O. M. Smith, who interviewed people who lived in the area during Brokaw’s heyday for his 1938 newspaper article.

“It was incredible fantasy transported into a community in which fantastic living was most unlikely,” Smith wrote. “In other words, as I saw it, it was a fairy story superimposed upon the harsh realism of the Randolph hills, existing, fantastic, but incredible and entirely removed from reality.”