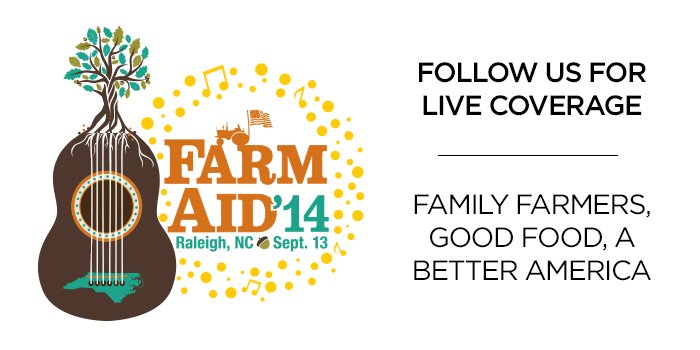 Farm Aid 2014 makes it home in Raleigh at the Walnut Creek Amphitheatre. Here’s a look at the artist lineup. Follow the live blog and Twitter feed below to see our updates through the day.

We’re so grateful that we’ve been able to spend the day at Farm Aid listening to great music and connecting with farmers and farm advocacy groups from across the state. Thanks for letting us share our experience with you. 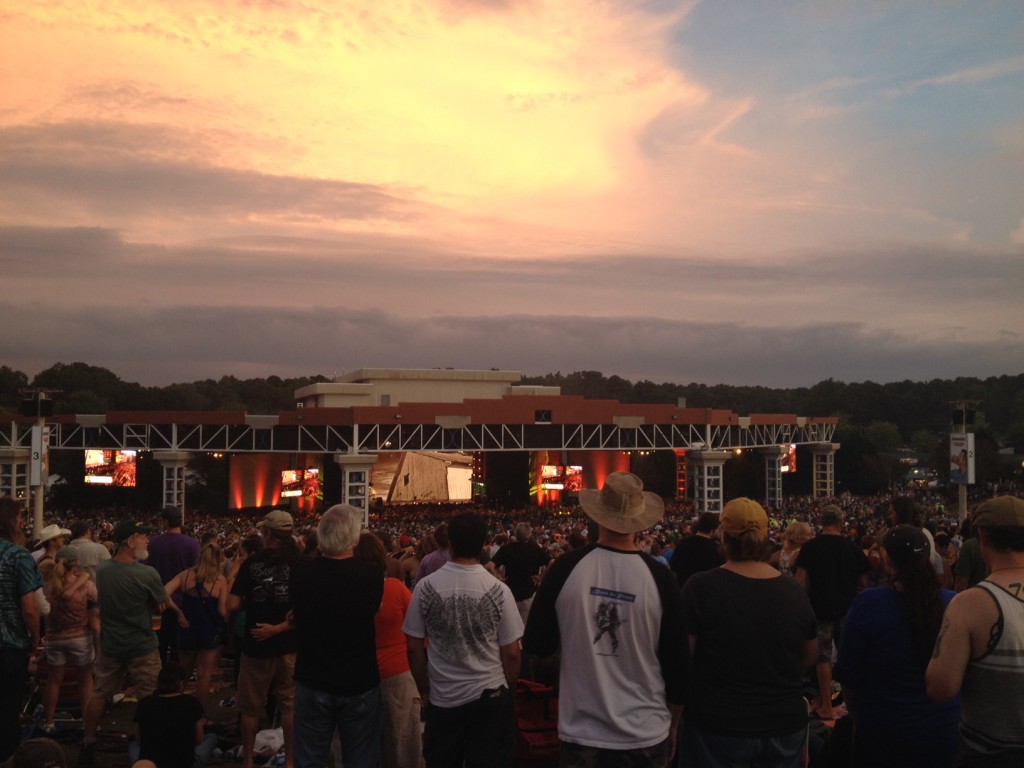 Quality music isn’t the only indulgence available to attendees at Farm Aid. Countless vendors have also been serving up delicious food made with local ingredients. These stands have allowed North Carolina businesses to sell their products and support their local farmers along the way. We caught up with Raleigh’s Slingshot Coffee Company and Durham’s Cafe Love and Scratch Bakery to hear about their Farm Aid experience. Check out audio excerpts from our conversations below. 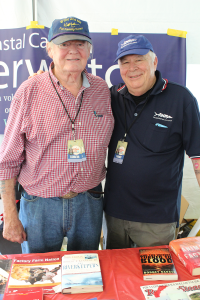 There’s an important link between farming and our water supply. According to the The International Waterkeeper Alliance’s website: Waterkeepers defend their communities against anyone who threatens their right to clean water.

While the alliance is spread internationally, there are 10 full-time river keepers who work on North Carolina waters. Find the one nearest you and lend your support.

The audio excerpt features Rick Dove (right), Keeper Liaison and Litigation Assistant. He has fought for the water rights of farmers and against factory factory, which he believes is the greatest threat to North Carolina’s beautiful landscape. Don (left) is a former factory hog farmer who is now an activist for local and organic agricultural practices. Read more about Rick’s work here. 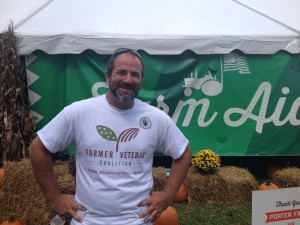 Here at Farm Aid, we’re learning how supporting local farms benefits a number of different communities. Robert Elliott, owner of Cypress Hall Farms in Louisburg, N.C., is on a mission to start The Veterans Farm of North Carolina, which will offer recent veterans the opportunity to work in agriculture. Learn more about the therapeutic benefits of farming and his hopes for this future initiative in the audio excerpt (above). 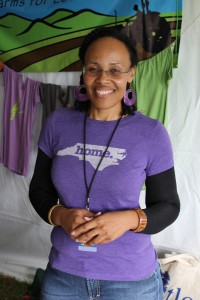 There are several fantastic organizations supporting land conservancy in North Carolina. One of them – Triangle Land Conservancy – is sharing their mission and story with the people at Farm Aid.

Listen to an excerpt (above) from our conversation with Tonya Taylor, community engagement coordinator at Triangle Land Conservancy.

Read more about their organization here.

Away from the main stage, there’s plenty of activity going on at Farm Aid. One interesting exhibit featuring local farmers, agrarians, and their supporters, is called Homegrown Village.

We stopped to talk to a few vendors about who they are and what attracted them to Farm Aid. Here are some photos and an audio excerpt from our conversation with Burlington-based TS Designs.

“Right now we’re choosing what the future of N.C. agriculture looks like. This will be dependent on three things: What consumers eat, how they vote, and what they’re willing to raise hell over.”
-Scott Marlow, RAFI Executive Director

At this morning’s press conference, Farm Aid spokespeople, North Carolina farmers, and esteemed musicians gathered together to discuss the state of agriculture in our nation.

The conference moderator kicked off the conversation by handing the microphone over to Willie Nelson. Nelson, Neil Young and John Mellencamp organized the first Farm Aid concert over twenty five years ago in 1985 to raise money for family farms. Since then, the event has continued to grow in size and production, but Nelson’s mission has remained the same. “It’s never been more important that the family stays on the farm,” Nelson said at today’s conference.

Simply put, but Nelson and other speakers argued that this effort is becoming increasingly difficult. Fairmont poultry farmer Craig Watts commented on the plight of small farmers combatting federal regulations and large corporate control of America’s farms. “A few companies control the whole of the food systems in our country,” he said. “We need transparency. We need public support.”

Next, Neil Young got the crowd on their feet, urging attendees to view Farm Aid not just as a celebration, but as a mission.

Throughout the conference small farmers from across the state shared their stories. Russ Vollmer of Vollmer Farms in Bunn, N.C., described his father’s courageous choice to convert their family farm from a traditional tobacco farm to an organic produce and agritourism farm. Through this transformation, Vollmer learned more about the intimate relationship farmers can have with their consumers.

Today, farmers across the state are working to strengthen this direct connection between farmer and consumer. Scott Marlow, Executive Director at RAFI (The Rural Advancement Foundation International), commented on the importance of farmers markets across the country. He claims that corporations are running small farmers into the ground. Local farmers markets aren’t just for the foodies – they’re an ongoing display of farmers fighting for their right to exist.

You are “revolutionaries,” Dave Matthews said. “This is a fight and the front line is the farmers.”

12:05 p.m., September 12
We recently had the pleasure of talking with Brittany Holljes (@brittanyhellyes), singer in the N.C.-based band, Delta Rae, about their involvement in Farm Aid 2014 and why the organization’s mission is close to her own.

Delta Rae just returned home from a USO tour, playing a show for American troops in Bahrain. Now, you’re playing Farm Aid 2014. Would you say Delta Rae is a band with a social conscience?
Music is one of the primary ways to create social change. There are so many things in this world that are ripe for changing. As much as we can use our voice for good, that’s something we want to do. We have to be true to ourselves creatively, and spread messages that are positive.

What is your connection to Farm Aid?
I was a farmer at a tiny farm in Hillsborough prior to my involvement in Delta Rae. I went from having minimal experience in agriculture to being the farm manager. We supplied food to local restaurants, and had a CSA (community supported agriculture). I saw how vital these farms are to the health of the community.

Music and food are the biggest sustainers of my life. There are no two things that go better together. And it’s important for us to remain tied to the community. When we heard Farm Aid was coming to Raleigh, we went to them and explained our desire to be part of it. Farm Aid serves as a beautiful model for the musicians of our generation.

What is Delta Rae up to now?
I’m currently in Raleigh working at the Raleigh City Farm. [Editor’s note: Holljes was actually pulling arugula during this conversation.]

As a band, we’re taking a rest before heading back into the studio this fall. Delta Rae is my baby, but we are finally in a place where we can turn our attention to things that we know can affect the world for the good.

Do you keep up with the local music and food scene in the Triangle?
Yes, but it’s a challenge to feel connected when we’re out on the road. We have a lot of connections that keep up plugged in. Our families are all here (in the Triangle), so this is home.

A few of my favorite bands are: Jeanne Jolly, The Old Ceremony, New Reveille, Chatham County Line, The Hot At Nights. The list could go on.

Where are your favorite places to eat when you’re home?
There are so many. Foster’s Market, Guglhupf, Rue Cler, Watts Grocery, Toast, Fiction Kitchen, Sitti, Raleigh Times Bar, Poole’s Downtown Diner, Standard Foods. If you want good food, come to the Triangle.

For their latest news and tour schedule, visit deltarae.com.

For 28 years, Farm Aid has featured the best music has to offer while remaining true to its ultimate mission: supporting farmers and strengthening American agriculture.

Willie Nelson, Neil Young, and John Mellencamp organized the first Farm Aid concert in 1985 to raise awareness about the loss of family farms and to raise funds to keep farm families on their land.

Farm Aid continues to make strives by promoting food from family farms, growing the good food movement, and taking action to change the system. The organization has raised more than $45 million since the beginning.

Farm Aid stands up for the most resourceful, heroic Americans – family farmers who work the land. For more information about Farm Aid, their annual concert, or their Action Center, you can visit farmaid.org. 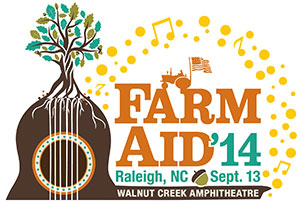