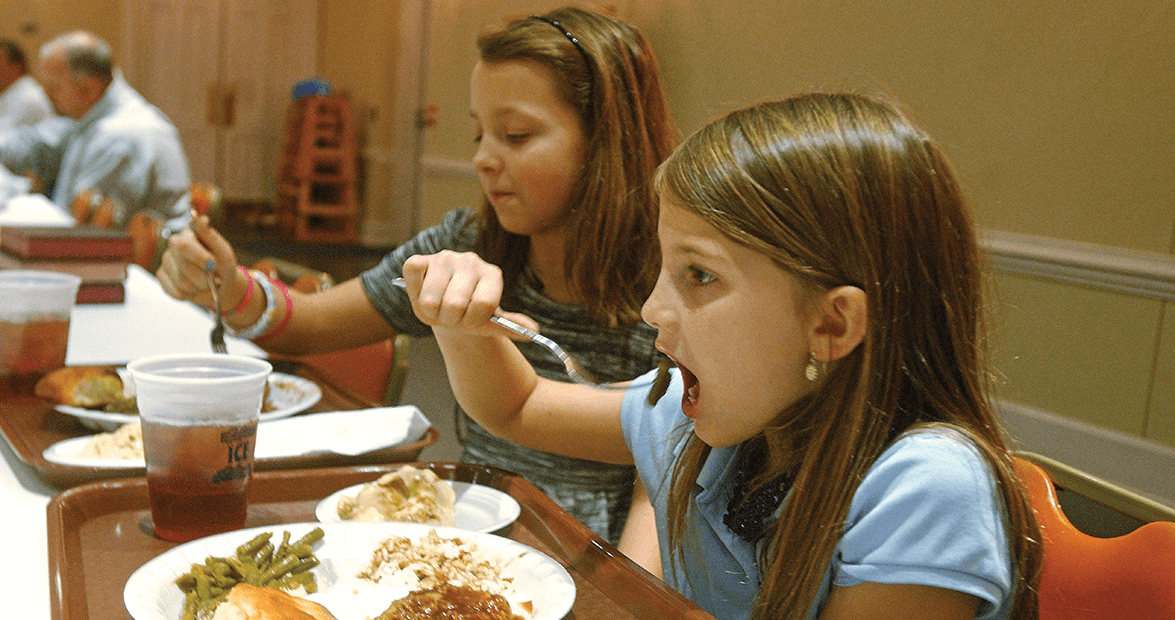 Linwood Sutton moves a little gingerly from table to table, placing hymnals in stacks of three until 39 of them sit scattered strategically around the spacious fellowship hall at First Baptist Church in Kinston.

In the adjacent kitchen, silverware rattles, and laughter comes in delightful bursts as volunteers position stainless-steel trays of steaming cube steak over heat behind a cafeteria counter.

On this evening, as it does every Wednesday, the hymnals rest beside clear salt and pepper shakers while the early birds trickle in.

They come for the steak. They stay for the salvation.

For as long as anyone at First Baptist can remember, Wednesday night suppers have served as a midweek battery charger. These dinners are not only a chance to have an affordable, home-style meal without the burden of preparation or cleanup; they’re also an opportunity for casually dressed church members to catch up while reaffirming their Christian ideals.

There are no suits or dresses, no stained glass, and no stuffy sermon. That’s kind of the point.

“The Wednesday night fellowship is extremely strong, and the informality of it appeals to me,” says Quin Outlaw, an 84-year-old Wednesday regular with a razor-sharp wit and a First Baptist membership that dates back to 1973. “And the supper seems to draw a better crowd. When we don’t have suppers, we don’t have as good a crowd.”

On the first two Wednesdays of nearly every month at First Baptist, the 5:30 p.m. dinner is catered by either a local restaurant or a grocery-store deli. The month’s next two meals are handled internally — bought, prepared, and served by a group of volunteers from among the church’s membership of approximately 340. If there’s a fifth Wednesday, a group within the church prepares a meal as a fund-raiser that might help send children to summer camp or go toward another in-house cause.

Generally, the dinners are old-style, country fare: ham and green beans, pork chops, or baked chicken, with the occasional spaghetti or pancake supper thrown in.

The menu, while important, is secondary. The underlying goal is to get members to interact on a level much deeper than they can on Sunday mornings, while offering a dose of spirituality to help get them through the week.

Running down the weekly prayer list — a ledger of names of the infirm or those away on missions and in special need of divine assistance — is the focus of the evening once the plates are cleared.

“You feel the warmth,” says Jones, a retired elementary school teacher who joined First Baptist as a 10-year-old in 1935. “You leave feeling better than when you came.”

It’s difficult to ascertain just how widespread Wednesday night church suppers are in North Carolina and beyond. They’re held on a church-by-church basis and not as a matter of denominational policy, so exact numbers are virtually unattainable.

Not as many churches hold the gatherings as regularly as they did decades ago, and the ones that still do — or ever did — are likely Baptist.

Jonas, a 53-year-old Kings Mountain native who grew up in the Rowan County town of Rockwell, has served as interim pastor at 12 Baptist churches in the eastern half of the state in the past 19 years. Of those, he estimates that three or four serve Wednesday suppers.

The possible decline, Jonas says, is a sign of the times. Older North Carolinians might recall a bygone era when many small-town businesses closed for the day on Wednesday afternoons and reserved the evening for church activities.

Soccer? Baseball? Dance? Piano? Not on a Wednesday, and certainly never on a Sunday.

That schedule has changed as church activities compete with an array of secular options.

“The church just does not hold its place of importance in society like it once did, at least not in Southern society,” Jonas says. “That goes for Sunday mornings as well. I would’ve never dreamed when I was a kid that there would be Little League baseball games on Sunday mornings.”

Those either without or willing to suspend those pesky other plans line up for dinner at First Baptist, where Kathy Tucker has spent the better part of a recent fifth Wednesday peeling 30 pounds of potatoes and boiling 25 pounds of cabbage in the church’s industrial kitchen.

Beyond the swinging door to the fellowship hall, about 50 diners drop donations into a white basket by the door, socialize a bit, and head for the food.

Over plastic foam plates of baked ham, cabbage, scalloped potatoes, biscuits, and four or five varieties of cake, the members — most of them retirees — discuss everything from the rising cost of medical insurance to how the local high school sports teams are faring.

It’s part of the Wednesday ritual, and it has a purpose.

“I think when people sit down to eat and talk and meet, they get to know each other better than just to come to church on Sunday,” says Tucker, a 65-year-old native Kinstonian whose efforts raised about $360 to help send church youths to camp.

After dinner, many young adult members and their children scatter to participate in choir practice or Bible- study groups. Raven Edwards, a 43-year-old stay-at-home mother of two, prefers to let her 10- and 6-year-old sons spend as much time as possible around the older members.

“It teaches them to respect their elders, to use their manners, and to have table etiquette,” she says. “They know that they’re not supposed to run around the room and play.”

As the condensation thickens on plastic cups of sweet tea, Senior Pastor Chuck Towery stands behind a podium at the end of 20 white folding tables set in rows of five to begin the official proceedings. After the group sings “Happy Birthday” to those celebrating this week, they sing “I’ll Fly Away” and “Victory in Jesus” in unison as Towery, who bears an uncanny resemblance to Vince Gill, strums a guitar and church member Kathryn Pittman plucks a banjo.

Towery, who recently accepted a position with Baptist Retirement Homes of North Carolina, leads the group in prayer to bless the food before getting to the prayer list. Jim is in the hospital. Carrie, who has cancer, has entered hospice. Three church members are homebound. Missionaries are scattered around the world.

“You can see the names,” Towery tells them. “Plenty to pray for.”

The midweek prayer, the congregates agree, warms the soul.

“It’s good for Christians to pray together anyway,” says Cynthia Cabell, the church secretary who compiles the prayer list. “That’s the main thing. I feel like it’s really important.”

Adds Outlaw: “It’s just a really good refresher in the middle of the week.”

Towery next gives a casual, 12-minute mini-sermon, complete with jokes and audience interaction, on the power of prayer. He frequently makes a point and asks, “What do y’all think?” to spark discussion.

Sutton, who took it upon himself to quietly distribute the 39 hymnals before the crowd arrived, will tell you what he thinks. An 82-year-old Kinston native, he has suffered two strokes, most recently in February 2012 as he underwent double-bypass heart surgery.

Sutton spent more time than he cared to on the Wednesday night list, gaining firsthand knowledge of what he believes is the power of having a group of friends and neighbors submit their prayers to the heavens on his behalf.

“They help,” says Sutton, who has recovered better than most. “Believe it or not, prayers do help.”

Even on a Wednesday.