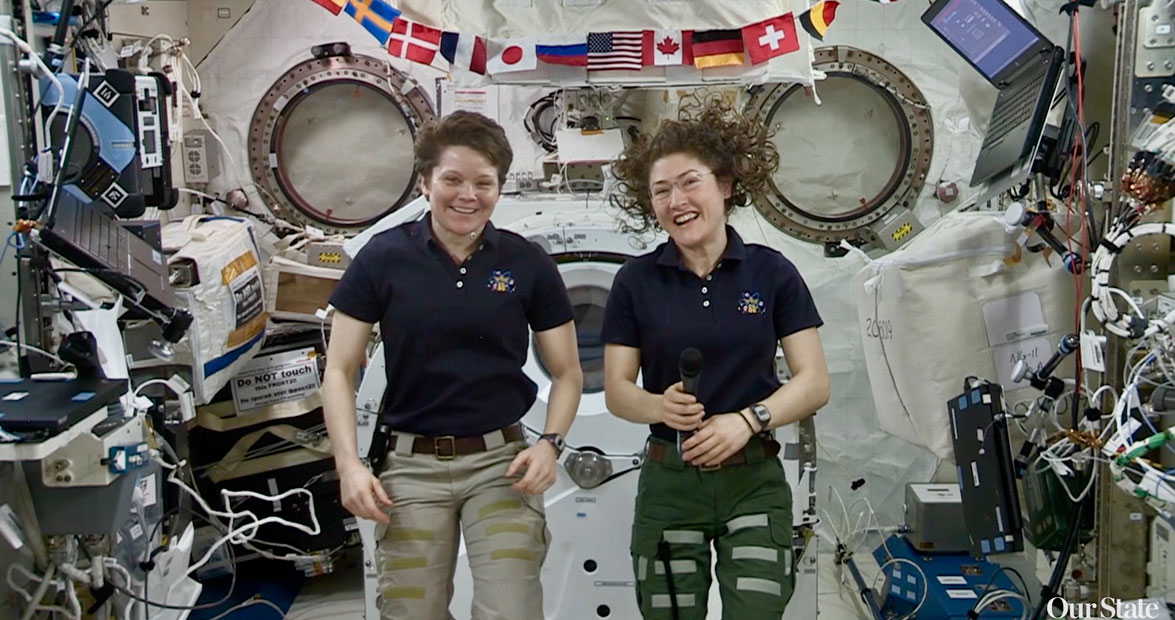 Christina Koch can send tweets from space, and one, in particular, caught our eye:

It took my breath away as it came into focus. My first glimpse of coastal North Carolina from space. It’s a special thing to see from above the place where you grew up–the ocean that first inspired my fascination with things that make me feel small & planted the seed to explore. pic.twitter.com/OZoqiOVtRR

Koch was born in Grand Rapids, Michigan, but she grew up in Jacksonville, North Carolina, and considers that to be her hometown. She graduated from the North Carolina School of Science and Mathematics in Durham and then earned two degrees from North Carolina State University in Raleigh. She’d always dreamed about exploring exotic places on this planet and beyond, and her career as a researcher took her to Antarctica, Alaska, and American Samoa. In 2013, NASA accepted her into their astronaut program, and in March 2019, she blasted off on a mission to the International Space Station (ISS), where she serves as a flight engineer. After she arrived, her mission was extended to 348 days, which will give her the world record for the longest spaceflight by a woman. She is expected to arrive back on Earth in February 2020.

We couldn’t wait that long to talk with her.

A few weeks ago, NASA granted us a 10-minute window to interview Koch onboard the ISS. (Fun fact: How do you conduct an interview when your subject is in space? Via phone.) During that time, Our State asked her about her mission, her home state, what it’s like to look down on us from space, and how we can get a copy of the magazine up to her. We’ve included the full interview with Koch and fellow astronaut Anne McClain (who has since returned to Earth). You can watch the video above, and listen to a special episode of our podcast, Away Message, where we take a closer look at Koch’s journey from North Carolina to the ISS, and learn a lot more about our state’s special connection to the space program:

Beautiful clear day to fly over my home state of North Carolina. Great to talk to you this week, Raleigh-Durham! I see you too, Jacksonville and Emerald Isle! pic.twitter.com/4HpOUWKZ1Z