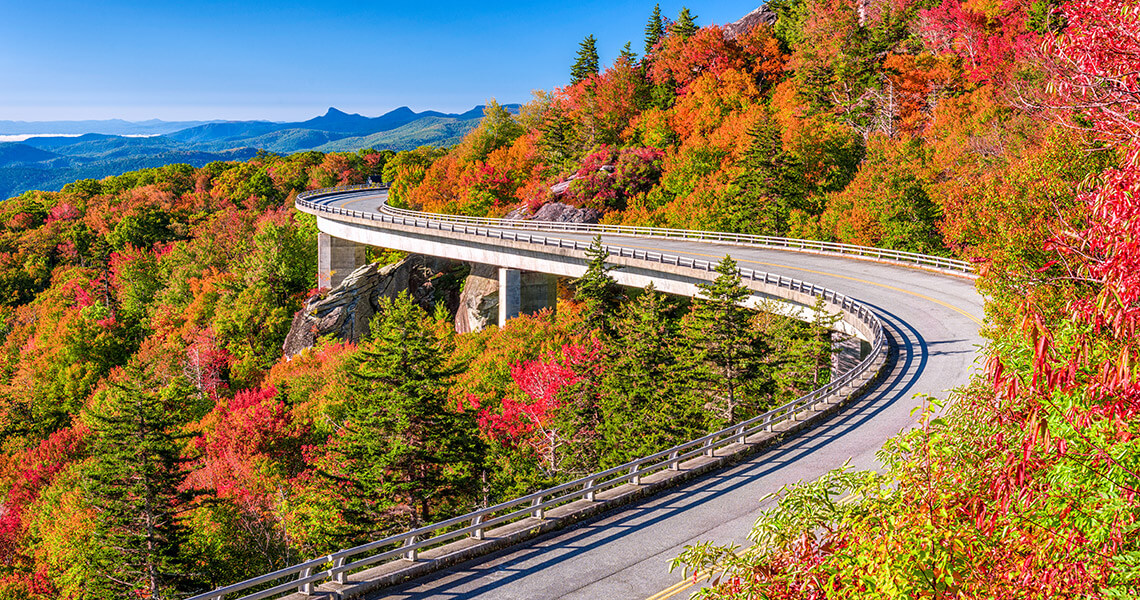 “When the days start getting a little shorter, the mornings are a little cooler, and school is back in session, that’s when people call to ask about the leaves changing colors,” says Candice Cook, who serves as executive marketing director at the Mountains of NC’s visitors center. “A lot of times they’re disappointed because those weekends don’t work for their schedule.”

Cook, who grew up in the North Carolina mountains, knows a secret: Fall’s true gifts extend beyond peak weekends on the Blue Ridge Parkway. It’s a secret that’s gaining ground; in fact, the Fall Lovers League of the High Country Facebook page Cook started just for fun — “for those obsessed with all things fall” — now has more than a thousand members.

Crisp mountain mornings, colorful leaves dancing on the water — these are the moments that locals relish. Read on for their guide to the best-kept fall secrets in North Carolina’s mountain towns. 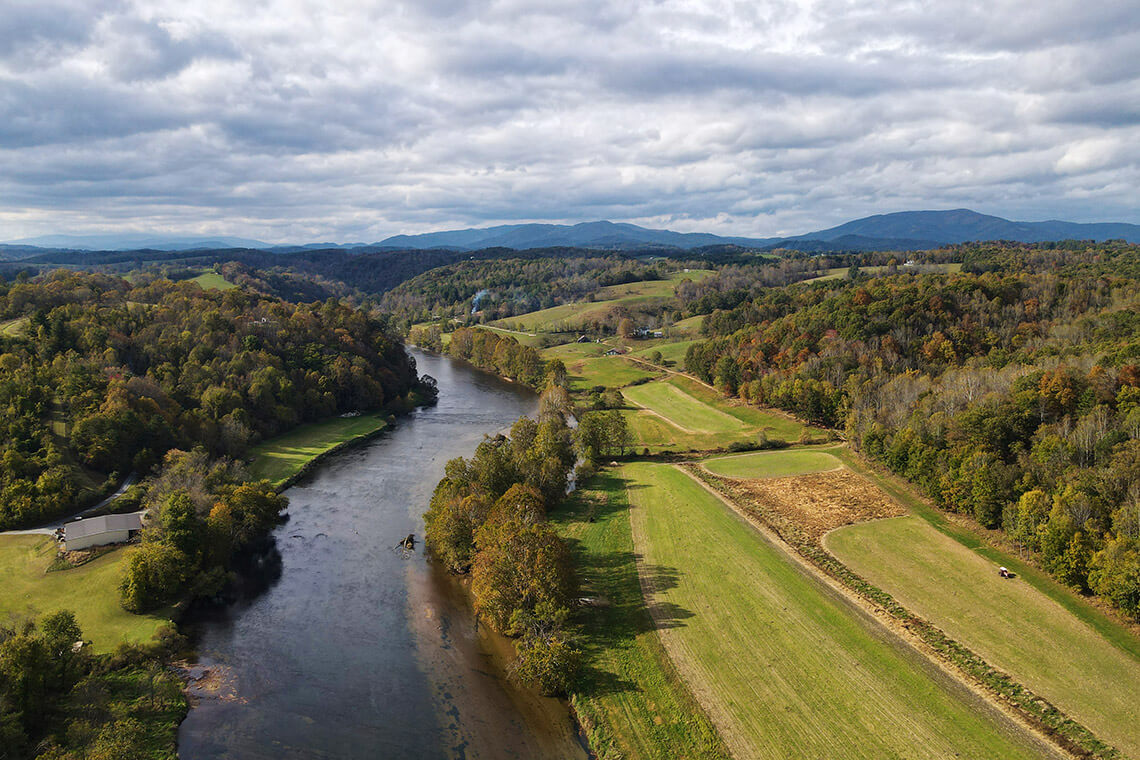 Glide down the river in West Jefferson.

While she loves sweeping, panorama vistas, when it comes to fall, Cook’s favorite views are close-up. “There’s nothing more magical than yellow birch leaves swirling around in the water,” she says. Cook likes to launch her canoe at the Wagoner Access in Jefferson, where there’s plenty of room to navigate and parking is easy.

Zaloo’s Canoes is a Jefferson-based outfitter that offers kayaking, canoeing, and tubing trips down the New River. Their trips run through the end of September, and for people visiting after that, they second Cook’s recommendation. “You can also put your own boats in at Sheets Bridge, just down the right from us, and then float two hours to the Wagoner Access,” says Zaloo’s manager, Tamara Kearley. 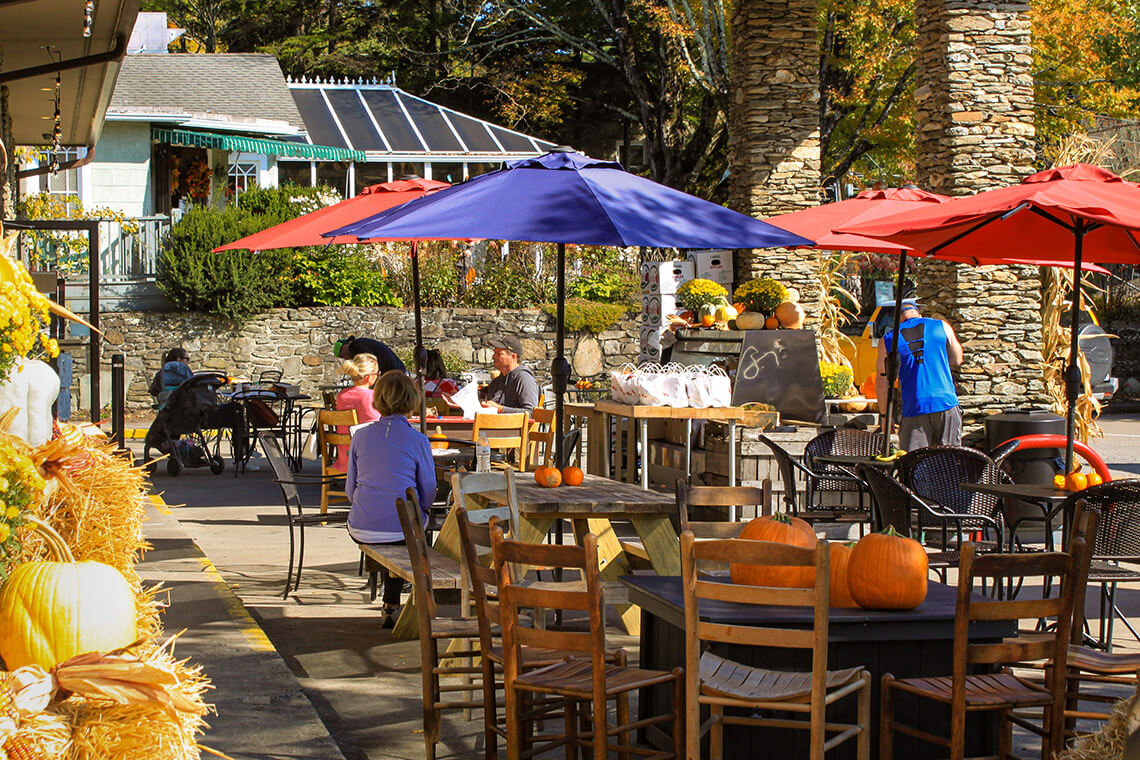 Get into the fall spirit in picture-perfect Blowing Rock. Photography courtesy of Blowing Rock TDA

Grab a scoop and scope it out in Blowing Rock.

In downtown Blowing Rock, a cone of Kilwins’ homemade pumpkin ice cream is the only accessory you’ll need for an afternoon of window shopping. The district is known for its bustling boutiques, art, jewelry, home decor, and antiques shops, and this time of year, creative window displays steal the show.

“Shop owners do the most awesome decorations for fall,” Cook says. “The town of Blowing Rock sets out a bunch of hay bales with scarecrows, and walking around really puts you in the fall mood.” 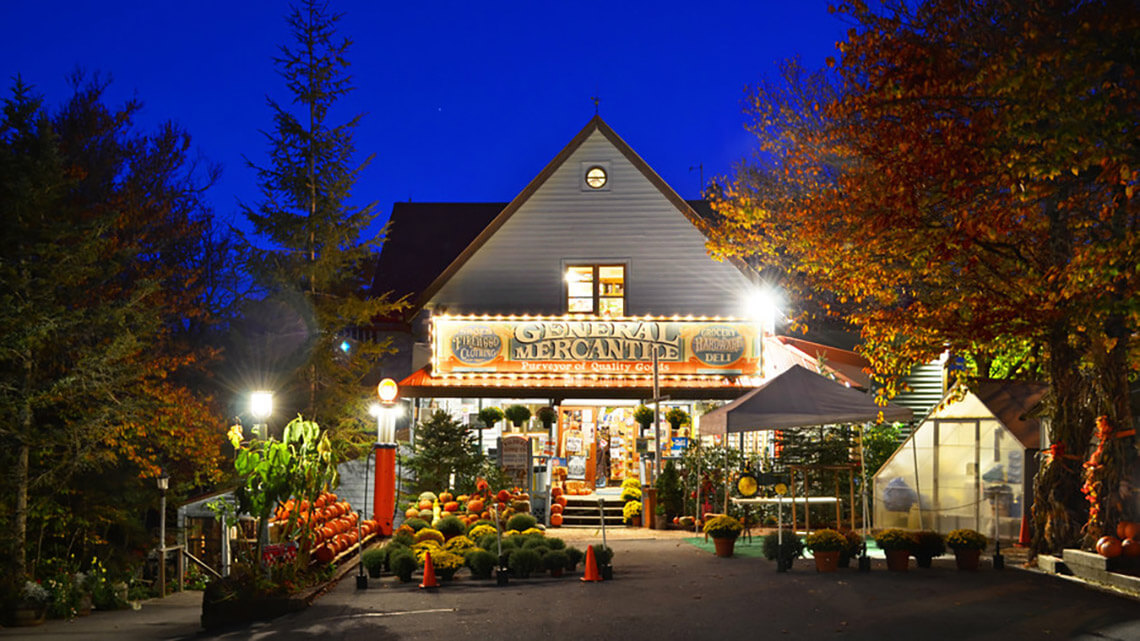 Thanks to its incredible cinnamon rolls — and kite-flying supplies — Fred’s General Mercantile is the perfect pit stop. Photography courtesy of Beech Mountain TDA

Fly a kite in Beech Mountain.

In Beech Mountain, the locals-favorite Fred’s General Mercantile sells two crucial supplies for kite-flying outings: kites — and cinnamon rolls. “Just across the road from Fred’s is a field perfect for flying a kite,” Cook says. It’s so perfect, in fact, that it hosts the Mile-High Kite Festival every Labor Day weekend.

Don’t sweat it if you miss the festival, because year-round, the wind current that sweeps up over the top of the mountain sends kites soaring to brag-worthy heights.

You’ll need fuel, of course, and that’s where the cinnamon roll comes in. “It’s the best you’ll ever eat,” Cook reveals. Look for the gazebo tucked into the trees, and enjoy your sweet treat surrounded by a backdrop of fall foliage. 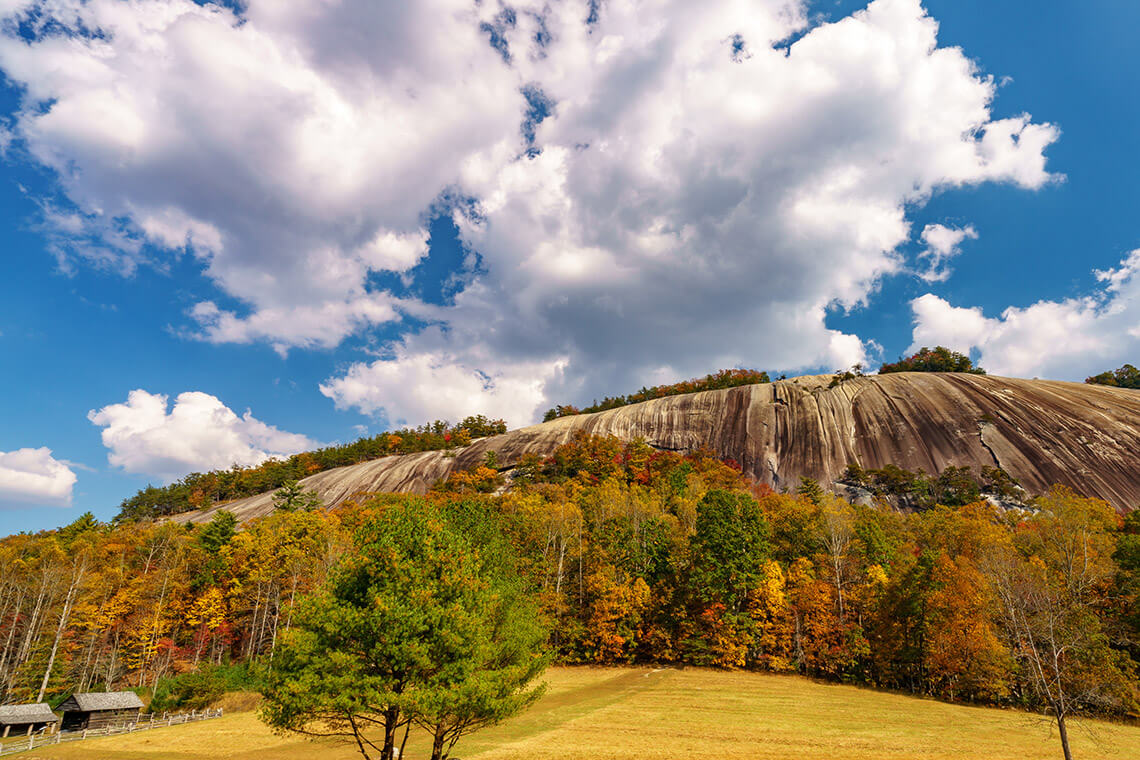 Experience peak fall color at Stone Mountain State Park even after the leaves are past-peak in other mountain spots. photograph by TheBigMK/Getty Images

Extend the season in Wilkesboro.

Even when the leaves have fallen from the trees at higher mountain elevations, you can still catch fall color at Stone Mountain State Park in Wilkesboro. Plan a stroll on the Middle Falls Trail, where you’ll come upon a cascade waterfall that ripples over the rocks in what seems like slow motion, inviting vibrant red, orange, and yellow leaves to linger.

“The leaves get stuck on the waterfall,” Cook says. “Unlike a river, where the water rushes over, the leaves cling to the rocks. It’s so beautiful, it looks like a painting.” 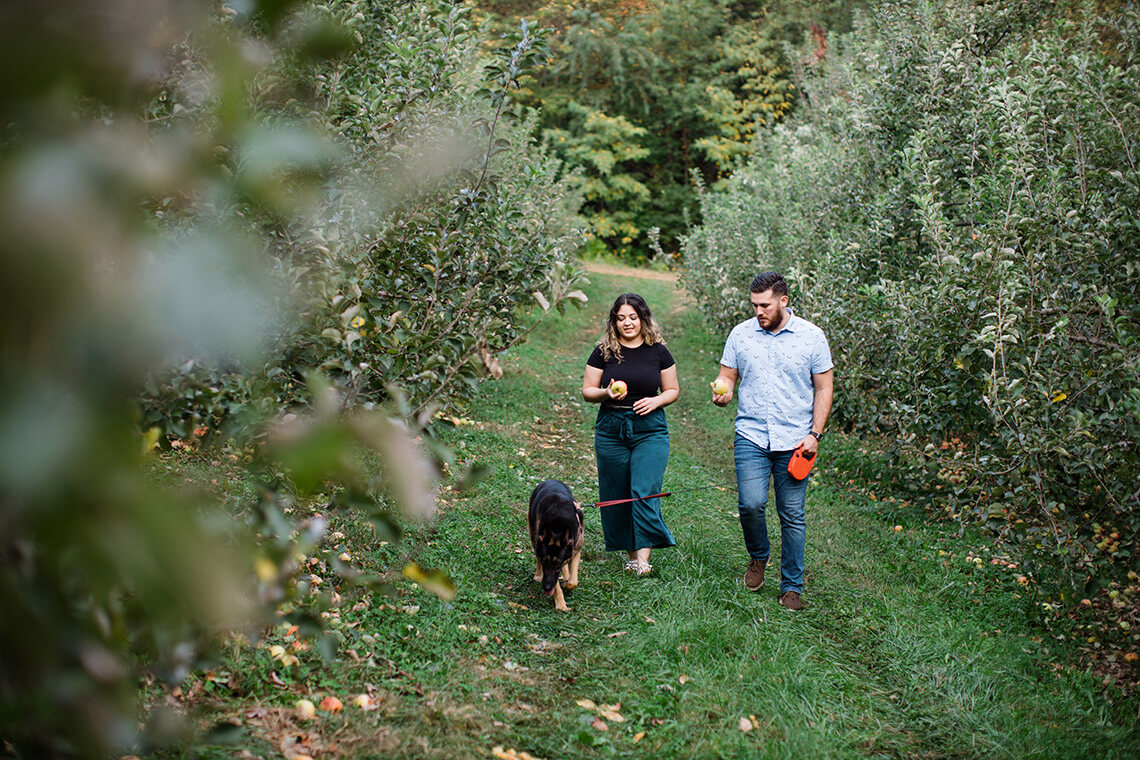 Pick your own in Moravian Falls.

Fall’s first apple pie is hard to beat — that is, unless you pick the apples yourself. The family-owned Perry Lowe Orchards has given visitors that opportunity since the orchard first started selling apples in the mid-1800s.

Jessica Lowe Adams and her brother, Perry Lowe IV, are the sixth-generation owners. “It’s all hands on deck this time of year,” Adams says.

In addition to picking your own apples on the weekends in September and October — reservations are required — you can hop on a tractor ride, a jump pad, and a bee-train ride. “Kids love our apple cannon,” Adams says. “They get to shoot the bad apples we aren’t going to do anything else with.”

While you’re there, sip a cup of Perry Orchards’ decadent apple cider, pressed and pasteurized with their own apples. 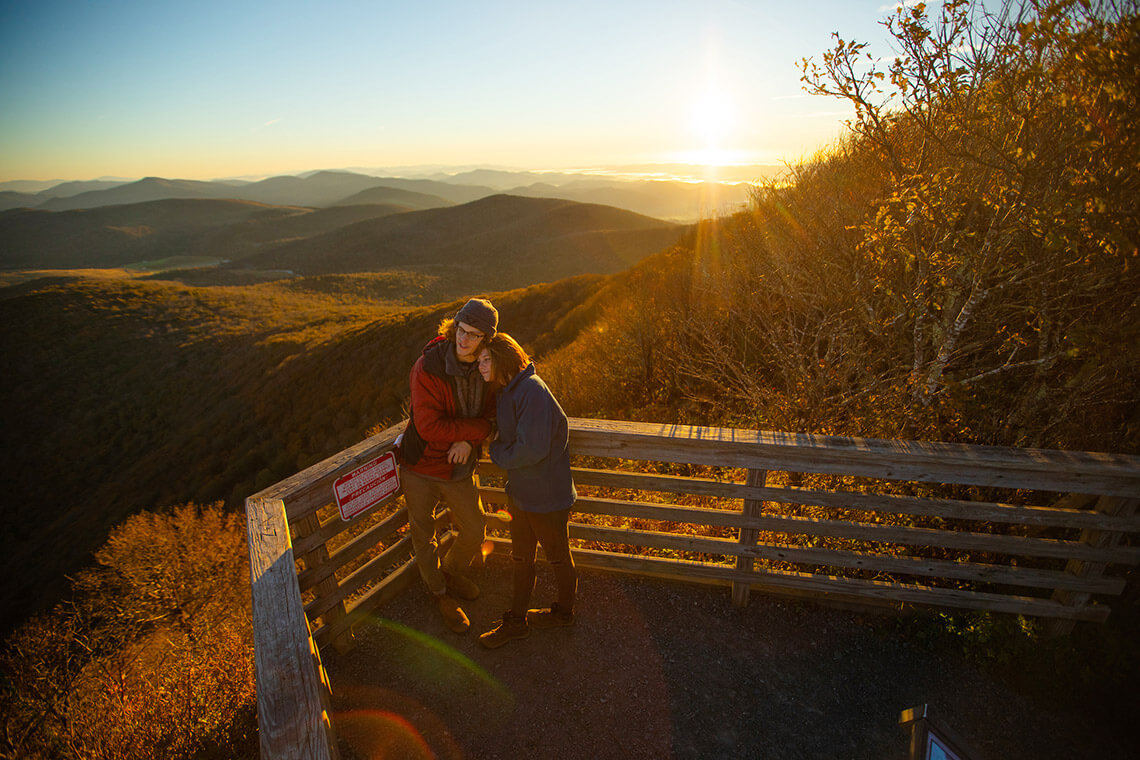 North of Boone in Watauga County, you’ll find one of North Carolina’s newest state parks and plenty of hiking opportunities. Just under two miles up and two miles back, the Summit Trail is a fun hike filled with shady, gentle switchbacks and views along the way. But the true reward is the summit — and, in Cook’s opinion, it’s even better than views from the parkway. “If you’re on the Blue Ridge Parkway, you get a lot of mountain ranges in your view, but then they stop because that land extends to the Piedmont area. Here, you can see more mountains than from anywhere else in the state.”

From Elk Knob State Park’s summit, the mountain ranges seem to stack up, one after another. “In the fall, it’s really neat because all those elevation changes give you different stages of leaf color,” Cook says. 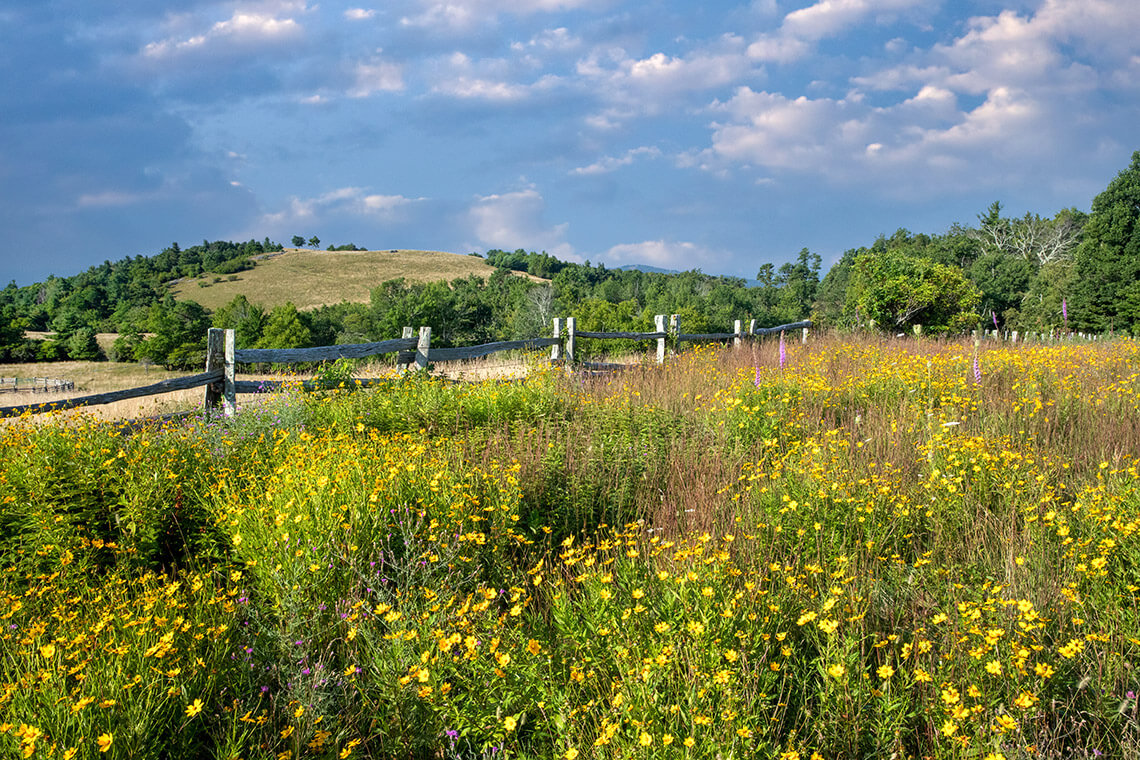 Doughton Park on the Blue Ridge Parkway is known for its fields of wildflowers in the summer, and wheat in the fall. photograph by Chip Henderson

Camp under the stars.

Every September after she attends the Mountain Heritage Festival in Sparta, Cook heads to Doughton Park on the Blue Ridge Parkway to pitch her tent and sleep under the stars. “It’s the best time of year to camp out,” she says. “In July and August, you have a lot of humidity, so the views can be stinted, but once fall’s cool mountain air arrives in September, you can see for miles.”

Doughton Park is known for its fields of wildflowers, which, in fall, give way to tall wheat that sways with the breeze. “Parts of the Bluff Mountain Trail winds through those fields, and you can hear the swooshy sound of the wheat; it’s almost like the sound of waves,” Cook says.

Plan to have breakfast at The Bluffs restaurant, a perk of camping at Doughton Park. “It’s one of only two campgrounds on the Blue Ridge Parkway that has a restaurant nearby. I love it because I pig out on food at the Mountain Heritage Festival the day before and then have breakfast at The Bluffs. Then all I have to pack are supplies for s’mores.” And psst — even if you don’t camp, downtown Sparta is less than 20 minutes from this eatery.