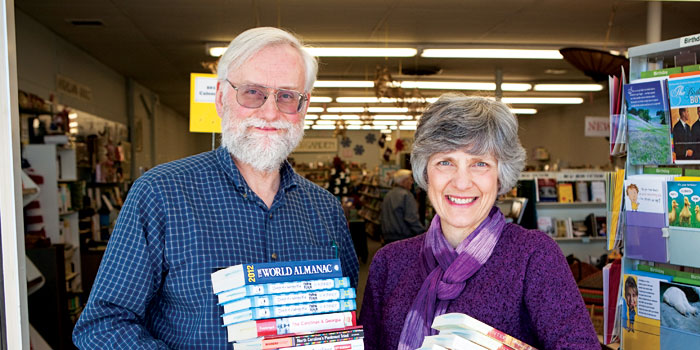 Editor’s Note: This story was originally published in March 2012.

Tim and Peggy Hansen saw Brevard as a beginning. They had a romantic notion of establishing a bookstore, making it a success, selling it, and then moving on to start another store farther up the Blue Ridge Parkway. They planned to repeat the pattern every few years.

“We saw ourselves as the Johnny Appleseeds of bookstores,” Tim says.

But a funny thing happened on the way to their dream plan: They fell in love with Brevard and couldn’t imagine moving on. Brevard’s small-town friendliness and proximity to natural attractions, such as Pisgah National Forest, impressed the Hansens. So they committed themselves to building Highland Books, located just blocks from downtown, as a business and an anchor in the community.

Thirty-six years after the couple purchased the store in 1976, Tim and Peggy see Highland Books as an opportunity to educate Brevard residents about the area around them. They stock trail maps for the Pisgah National Forest, DuPont State Forest, and Panthertown; guides to North Carolina waterfalls; and the Trails Illustrated map for the national forests of western North Carolina.

They also offer the expected hardcover best sellers, a children’s room, and magazines from The New Yorker to Hobby Farms. Toward the back of the store, several easy chairs tempt browsers to explore the world through words.

The Hansens feel a zeal for promoting reading among all members of their community. They helped build a library for a local after-school tutoring program. They collaborate with the Transylvania County library when it holds lectures with nationally known authors. And they display the current book selections of the 18 local reading groups.

Highland Books is now a touchstone for a second generation: children who grew up going to the store with their parents.

“It’s so heartening to know that Highland Books has thrived all these years,” says Liz Cozart, a longtime patron. “The longevity is unusual and valuable to the community. When my kids — now young adults and living in the Triangle area — come home to visit, Peggy and Tim’s store is one of the first places they go. It’s like a pilgrimage for them. The store’s continuity over the years makes that possible.”

That continuity and family feel have been Tim and Peggy’s goal since they bought the store. When their two daughters came along — Lena in 1979 and Megan in 1982 — the girls napped in bassinets behind the counter. “People came in to see ‘the babies,’ and we considered them our best PR,” Peggy says. And the girls embraced the family business.

“My sister and I worked our way up,” Megan Hansen Shepherd says, “from ‘promotional cute baby behind the counter’ at age 1, to ‘shelf straightener’ at age 5, to ‘inventory counter’ at age 12, to the exalted cashier position in high school and college.”

Perhaps it was inevitable that both daughters would become writers. Lena, who works for a sustainable energy policy organization in Colorado, is co-author of the book Reinventing Fire: Bold Business Solutions for the New Energy Era. And her younger sister, Megan, recently won a three-book contract for young-adult novels.

For years, the Hansens worked at the store six days a week, doing it all. But they also made time to volunteer in the community. Peggy recently won an award for Women Who Make a Difference from the local American Association of University Women. She serves on the board of the Free Clinic of Transylvania County; organizes the annual fund-raiser for missions at St. Philip’s Episcopal Church; and tutors at El Centro, which serves the local Hispanic population. Her fascination with the community’s older residents and local culture inspired her to compile the oral histories of 20 residents in a new book called Transylvania Memories. And Tim’s interest in planning and peace-related projects led him to serve on Brevard’s planning board and participate in a foreign-policy group promoting peaceful solutions to conflict.

Although they abandoned the Johnny Appleseed fantasy, Tim and Peggy Hansen now have 35 years worth of roots in this small town in western North Carolina. And that’s a beginning to be proud of.

Katie Baer recently relocated from Brevard to the Chapel Hill area, where she is a freelance writer.