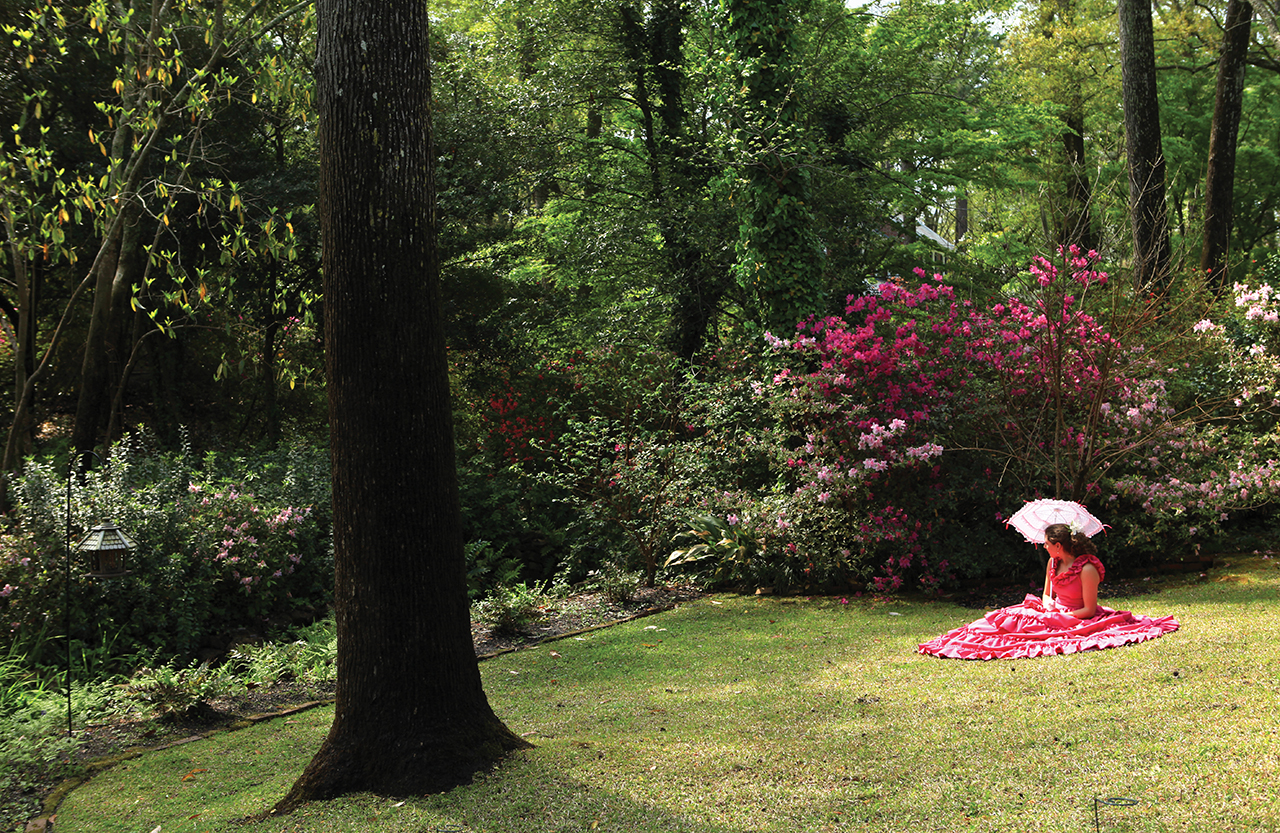 Sabrey Franks plays in her high school orchestra — first chair, second violin. She gets her hands dirty planting flowers and picking up trash as service work for the National Honor Society. She built a solar-thermal panel for her senior project. She used to hustle eggs, pancakes, sausage, and coffee at the Waffle House, and now she’s about to shift to grill cook at Cracker Barrel.

The azalea is a dense, often low and sprawling shrub, cousin to the rhododendron and mountain laurel.

Ingrid Jackson captains the basketball team. She serves as National Honor Society vice president. As a leader of her high school’s D.R.E.A.M. team, she tells kids to stay away from drugs and alcohol. She tutors her classmates in Spanish. On weekends, she sells shoes at the mall.

In spring, the azalea blooms in red, purple, pink, white, and orange.

Caitlyn Jones plays trumpet in her school’s jazz band, French horn in the concert band. She tutors middle schoolers in music. On Sunday mornings, she teaches Bible stories to elementary schoolers at her church.

Every year since 1948, Wilmington has celebrated the azalea with a festival.

April arrives, and these young women throttle back their busy lives. They set aside their cell phones, their Facebook status updates, their instant online everything. In exchange, each receives a handmade hoop dress, frilly gloves, a parasol, and a return to social networking in its original form — face to face, up close, in real time. 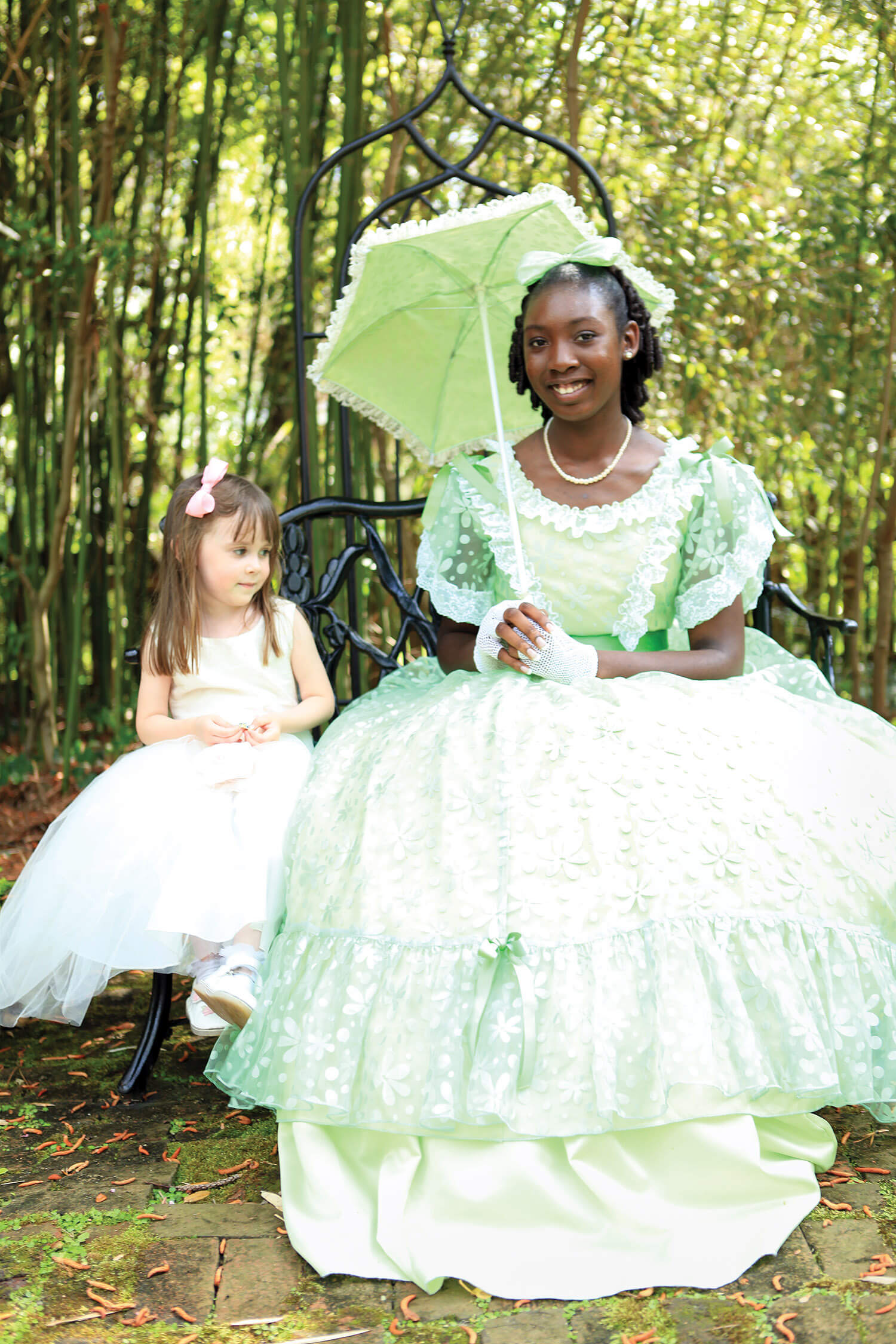 While racing toward high school graduation, all three volunteer for the belle brigade — 137 young women, outfitted in elegant period costume, lending an Old South accent to a long spring weekend of North Carolina Azalea Festival ceremonies, a parade, and a tour of home gardens with elaborate fountains, trellises, walking paths, and acres of azalea beds.

“I thought, I’m 18,” Franks says. “I might as well have one more princess experience before I go off to college.”

So she and the others play make-believe Southern royalty, polished ambassadors of cultivated gentility for the thousands of festival visitors. Now in their 45th year, the belles symbolize the Azalea Festival as much as the flowers themselves.

Those azaleas — countless funnel-shaped blossoms in crimson, ivory, ocher, cinnamon, salmon, lilac, peach, maroon, and wine — lure folks outdoors for a good-riddance-to-winter weekend. Frank Sinatra, Ray Charles, and
Tony Bennett all have played the Azalea Festival. So has Lynyrd Skynyrd. And KC and the Sunshine Band. This year, it’s Widespread Panic. Besides the music and the gatherings of smiling dignitaries wearing sun hats and seersucker suits, the weekend packs in a street fair and a circus, an art contest, a boxing tournament, and a coin show.

And, Queen Azalea gets a crown.

You see the belles all over town: at the festival queen’s coronation, aboard a riverboat on the Cape Fear, on floats in the Azalea Parade, and across all the gardens on the tour.

Among those who take special notice are wide-eyed little girls who envision themselves as big girls wearing big hoops.

“I remember seeing the belles in all their pretty dresses,” says Mackenzie Dalton. “I’ve always wanted to be a belle.”

She started down her own belle path months before the festival, when she passed the initial application phase, then an interview with a committee from the belles’ sponsor, the Cape Fear Garden Club. Daughters and granddaughters of club members get first dibs, followed by New Hanover County high school seniors, then juniors. After they’re picked, the belles are feted at a tea party, and they meet with one of the three festival seamstresses to choose their dresses — elaborate gowns in radiant primary colors and subtle pastels, each garment cut, tucked, and sewn with fitted bodices, bouffant sleeves, and all manner of tufts and ruffles consuming 15 yards of fabric and another 40 of lace. Plus matching pantaloons.

The dresses come with instructions.

“They make sure everyone has perfect posture, proper etiquette — everything,” Jackson says. 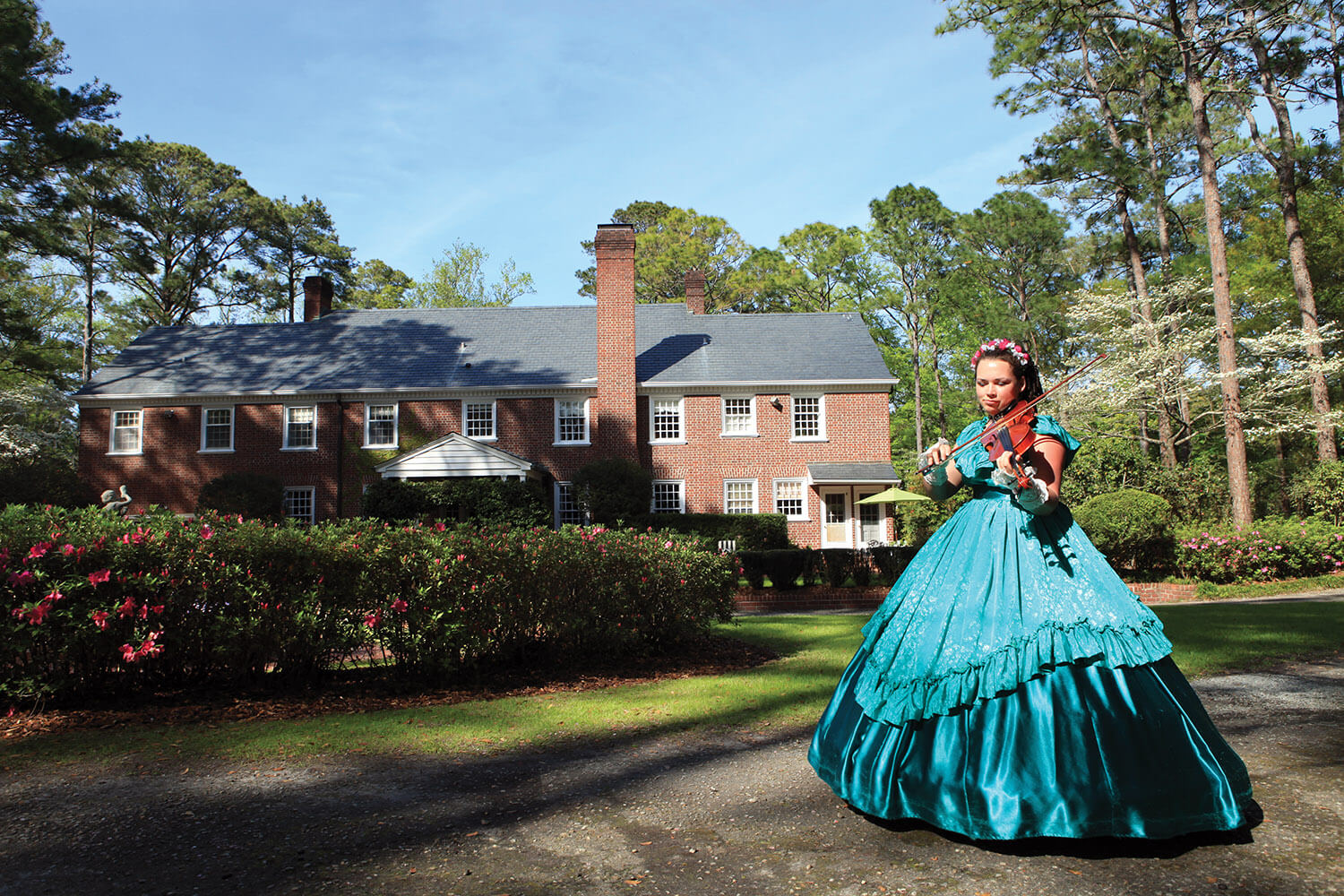 They have rules, too: No eating while on duty. No chewing gum. No cell phones, no dyed hair, no painted fingernails. Belles should read up on the gardens and prepare to talk plant types and growing conditions with the visitors.

Before the festival, the belles assume that all the dressing up will highlight their weekend. Yet after going on duty — belles work three-hour shifts and whirl from ceremonies to the parade to the azalea gardens — they say the real fun comes from all the attention they get. Children ask to have their pictures taken with the belles. Adults want to meet the young women and hear about those dresses.

“When you’re walking though the garden and you see all the tourists,” Franks says, “it’s cool knowing that you’re a part of Wilmington’s history.”

Jones learns a more personal lesson: “I do feel like I overcame my shyness.”

She and Jackson also settle internal conflicts — they are young minority women taking part in a festival that beckons images of the antebellum South.

“For me, it was a contradiction,” Jackson says. Some people tell her that they didn’t know she was allowed to be a belle. Jackson replies that she’s earned the right. “There’s no stigma to that,” she says. “It’s kind of like a mixed blessing. But at the same time, it’s a privilege.”

Jones wants to set a good example for her five younger cousins who visit from South Carolina during the festival. And in her bright green formal dress with matching gloves and parasol, she knows they — and others — are watching.

“I got stopped by a lot of African-Americans, and they wanted to take pictures with me,” she says. “It was very positive.”

Although the belles maintain a no-tech public appearance during the festival, they get steady online buzz behind the scenes. The garden club uses social media to send reminders, compliments, and encouragement. “Thanks to all the lovely Azalea Belles for adding to the ceremony with your smiles, youth and beauty!” one message says. Another advises, “You might want to bring a large trash bag to stand on should the ground be wet and bring a bottle of water with you please!”

Dalton can’t completely disengage from her busy outside life during the festival. After belle duty each day, she climbs into her car, changes out of her baby-blue-and-white dress, and races to a theater to dance in the musical Leader of the Pack.

Franks even manages to blend some of her regular world into her role as a belle — she brings along her violin. Wearing her emerald dress and a family heirloom cameo, she floats about the gardens, improvising soft “table-music” melodies.

“It was cool,” she says. “I got a lot of positive feedback while I was walking around, playing.” 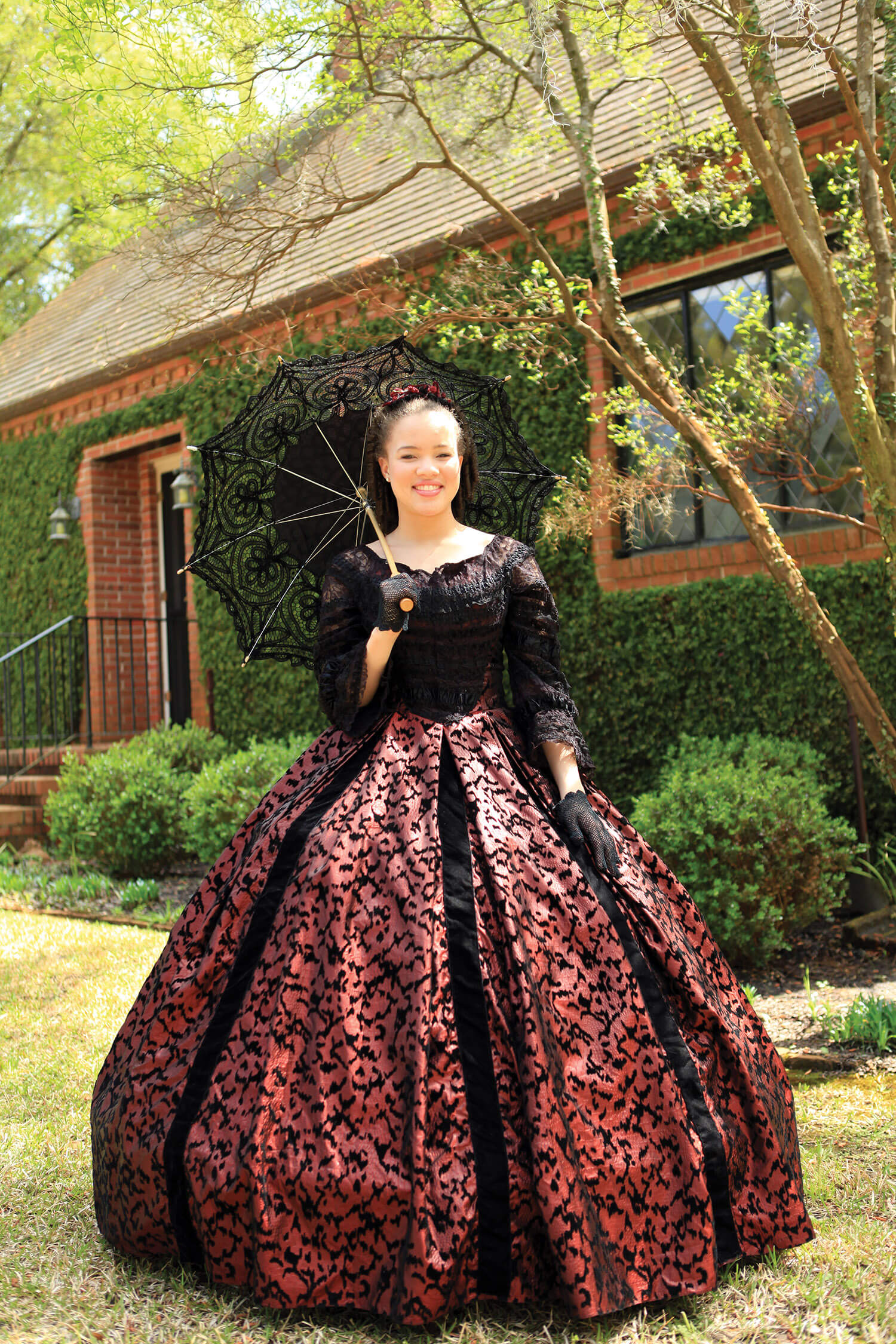 There is, of course, the challenge of “walking around” in a hoop dress, with or without a violin.

“The way it works is that you’ve got three to five rings, and they’re like aluminum,” Franks says. “They’re tiered. You pick up the skirt, if yours is a one-piece like mine, and you tie the string right above the hips, and it hangs on there. You put the dress over it, and it looks very pretty. If you think about it, you’ve got like this cloud around it, this bubble, and you can move around in it. You see this big skirt, but underneath, it’s just legs.”

Dalton finds her dress daunting. Her mother has to chauffeur her from station to station during belle duty.

“I hadn’t ever had a dress like that before,” she says. “I couldn’t drive with the big hoopskirt on.”

Belles spend some of their garden time seated, their extravagant dresses pooled around them on the grass. This requires forethought.

“If you sat on the lawn and didn’t have the proper towel,” Jackson says, “that wasn’t good.”

Simply walking poses its own challenge.

“There’s almost an art to being a belle,” Franks says. “If you walk in a normal manner, the dress will kind of bounce. But if you take it one step at a time — almost like dancing — then the dress kind of sways, as you do. If you try and walk too quickly, it’s almost like there’s some resistance on the dress. If you walk slowly and gracefully, it’s like you’re not losing it.”

After festival weekend, the belles return the dresses, power up their cell phones, and reenter the fast life of 21st-century youth and possibility. Jones reconnects with her Sunday school class. Dalton dances on through her musical. Jackson goes back to the shoe store and the tutoring. Franks fires up the grill at Cracker Barrel. Soon their spring semester will close, and Dalton will move into her senior year, while college awaits the others — Jones heads to Greensboro, Jackson to Chapel Hill, Franks to Asheville. And, as they scatter, they take an Azalea Belle lesson with them: Go slowly. Take one step at a time. Move forward, with grace.