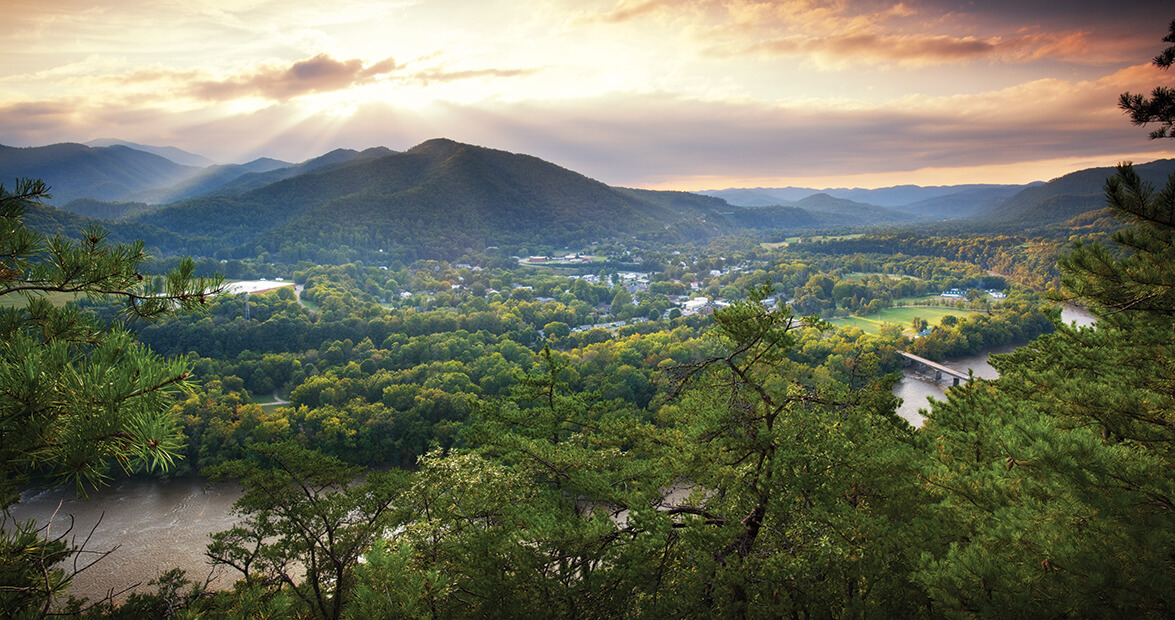 Ron West grabs the hammer from the backseat of his tan Chevy pickup before getting out. As he approaches a raised manhole oddly placed in the middle of the woods, he draws his hammer back, swings, and locks its claws underneath the manhole’s handle on his first try. Slowly, he lifts the iron lid, and a mixture of steam and warmth kisses the fresh air. Inside the hole, pipes rise up from a pool of crystal clear water that’s approximately six feet deep. “Our hottest spring comes out of the ground at 108 degrees,” he explains. West brags about this natural phenomenon like a proud father. The manhole, as it turns out, covers a hot hole where mineral water is pumped from natural hot springs — the only hot springs known to be in North Carolina. These springs are responsible for the existence of the mountain town of Hot Springs and subsequently its revival.

For centuries, the waters of Hot Springs and their “healing powers” have lured folks to this tiny community in western Madison County. West and his wife, Sandy, manage Hot Springs Resort and Spa and have done so for the past eight years, but they’ve lived in Hot Springs since 1979. The Wests say the town was a ghost town before the springs reopened in 1990. “It really opened up Hot Springs again,” Ron says. The key word in that sentence is again. Although this small town doesn’t have any stoplights, Hot Springs has a rather glamorous past.

Surrounded by the Blue Ridge Mountains, the Pisgah National Forest, and the French Broad River, Hot Springs’ terrain has always been pristine. The Appalachian Trail runs straight through town, further proving that you’re in the midst of a Sierra Club dream. Such a place is fitting for a resort destination. Add the mystical waters that come up from the ground and have been known to ease physical ailments, and you’ve got a natural paradise.

Believed to be used first by the Cherokee Indians, the springs were discovered by white settlers in 1778. Thirteen years later, William Nelson bought the hot springs property, and the town’s foray into tourism began. Initially named Warm Springs, the town got a big boost in 1827 when the Buncombe Turnpike was completed. A couple of hotels followed, as the town earned an international reputation for its magical waters. The Warm Springs Hotel had a dining room that could seat 600 before it burned in 1884. The Mountain Park Hotel, complete with four stories, more than 1,000 feet of piazzas, and a bathhouse with 16 marble-lined pools, was built in 1886 — the same year a hotter spring was discovered, spurring the town’s name change to Hot Springs. During the early 20th century, when World War I hijacked everyone’s attention, business slowed and the hotel served as an internment camp for German merchant sailors. The hotel burned in 1920.

Although another hotel, The Hot Springs Inn, was built on the same property four years later, it never enjoyed the same success and was eventually destroyed by fire in 1977. Hot Springs became even more isolated when Interstate 40 was built south of town in the 1960s. Visitors became few and far between.

However, one visitor who stopped by in 1956 turned out to be a rescuer of sorts. Eugene Hicks, a Madison County native, was home from the military when he stopped by The Hot Springs Inn to ask if he could look around. “They told him, ‘No, registered guests only. Be on your way,’” Sandy West explains. The refusal upset Hicks so much that he vowed he would one day buy the 100-acre property, and that’s exactly what he did 34 years later.

Hicks lived in a camper-trailer as he tried to clear the neglected property and find out where the springs were. During a snowfall, he saw a spot in the woods where the snow was melted. Sure enough, he discovered the location of the hot spring. Instead of renovating the bathhouse and its marble tubs, which still stand on the property today, he decided to pump the water into modern hot tubs.

“He [Hicks] started out by putting two tubs by the river,” Sandy says. “He literally sat out there by the picnic table and waited to see if anyone would come.”

People did come, and lots of people come now, including such celebrities as Lance Armstrong, Robert Redford, and the Dalai Lama. While the guest list includes the rich and famous, Hot Springs is hardly exclusive. Because of how Hicks was treated on that day in 1956, he was adamant that Hot Springs Resort and Spa be a working-person’s spa — a spa that the average working family could afford to enjoy.

With 15 outdoor tubs cradled by the rumbling French Broad River and Spring Creek; spa services, such as facials and massages; plus accommodations in cabins, campsites, hotel-like suites, and even a three-bedroom house, Hot Springs attracts 50,000 guests a year.

Hicks passed away in 2008, but his legacy continues, as The Eugene G. Hicks Administrative Trust now owns the resort. Whether deliberate or not, Hicks’s goal of making the spa accessible to everyone permeates this town of 667. On Tuesdays, for instance, the spa offers a county discount — 40 percent off for anyone living in the county — something Sandy says, “speaks volumes of [Hicks’s] connections to the people.”

Walking down Bridge Street, the main and only drag in Hot Springs, you won’t find high-end boutiques or five-star restaurants. Instead, you’ll find such places as Bluff Mountain Outfitters, where rafters and hikers on the Appalachian Trail stop to use the store’s ATM or buy supplies. You’ll find Tootsie’s Apple Basket on Willy’s Corner, where Tootsie Gregory sells homemade goodies. (Turns out a MoonPie can be even more delicious once it’s dipped in dark chocolate.) You’ll find The Iron Horse Station, a beautifully restored group of historic buildings that includes a restaurant, tavern, inn, and shop filled with the work of local artists. And you’ll come upon Gentry Hardware, which has been open since 1946.

“You finding some perties?” owner Keith Gentry asks with his friendly Southern accent. “I am,” answers the customer as she brings a grandma doll
to his desk. Gentry carries all sorts of things in his store from axes and shovels to figurines of raccoons and Jesus.

Gentry’s father, mother, and grandfather opened the store when Gentry’s father, James, came back from World War II. James died unexpectedly of a blood clot almost five years ago. On the night of his death, folks gathered in front of the hardware store hugging and consoling each other.

Gentry manages to run the store while working a swing shift as an electrical foreman at the Wilsonart International plant in nearby Fletcher. “Too stubborn to give up,” he says of the store. His son, Travis, plans to continue the family tradition one day.

A native of Hot Springs, Gentry says that the town has changed over the years. “We’ve still got some farming, still got some manufacturing, but we’re more tourism now,” he says. “We’ve got some fine people that’s moved in. … For the most part, we kind of like it the way it is. I guess we don’t mind change as long as we’ve got a little warning.”

Although tourism has increased over the years, the town hasn’t suffered from sprawl because it’s landlocked by the mountains. The closest thing to commercialism here is the Dollar General. But even it fits into the natural scheme of things; hikers prop their backpacks on the outside of the store as they go inside for a junk-food fix. Hot Springs has a laid-back feeling about it that even flows through its political veins. The current mayor, Sidney Harrison, won as a write-in. Another man, Johnny Norton, filed. But when Norton decided he didn’t want to run again, he called Harrison. “He actually asked me to run,” recalls Harrison, who is 70 and has lived in Hot Springs all his life. “I hold meetings. I don’t vote. … I guess I mainly do PR for the town.”

Take care of the people

Through the town’s ups and downs, it has managed to maintain a sense of community. When the entire town lost power for five days right before Christmas in 2009, everyone banded together. The fire department set up generators at the welcome center and cooked food.

The town maintenance workers and the fire department brought the elderly tenants in public housing to the welcome center for warmth. Genia Hayes-Peterson, the owner of Smoky Mountain Diner, and her staff cooked what they could on a gas stove.

“Well, most of our husbands, they all hunt, so all of us girls wore coon lights. Well, I call it my head lamp ’cause I hike,” explains Peterson, who has hiked 850 miles of the Appalachian Trail. “We did sausage biscuits, and we did fries and things in the deep fryer, anything we could cook in that gas.”

As Peterson sits in a booth wearing a brown Smoky Mountain Diner T-shirt, khaki pants, and trail shoes, the 47-year-old brims with energy. She strives to make sure people are well fed; her diner is open 365 days a year, so no one has to eat Christmas dinner alone. “We have a lot of older people that come and hang out with us on Christmas Day and Eve,” Peterson says. “We do the traditional Christmas dinner — turkey, ham, sweet potato casserole, the whole nine yards with the red velvet cake. Well, we call it the birthday cake for Christ’s birthday. On New Year’s Day, we have the traditional hog’s jowl and collards; start the year
out right.”

One of the diner’s most popular dishes is The Skillet Breakfast — chunked potatoes with a choice of meat and green peppers, onions, and mushrooms, all smothered in cheese and served in an iron skillet with the eggs on top. “Lots of food, lots of carbs, and your protein, too, with your eggs, and you get a side of bread with it; you get a biscuit or toast,” Peterson says. “We serve cornbread, rolls, crackers, some kind of bread with everything.”

There are also items for the health-conscious, such as salads and hummus wraps. Peterson is intent about using local food whenever she can. Although she grew up in Hot Springs, she moved across the county nine years ago to Mars Hill, where she lives on a farm with her husband, Kevin. “We raise our produce for here at the diner. We raise about 30-to-40,000 plants of cabbage. We do green peppers. We do potatoes,” she explains. “I buy from all the local farmers here just because it’s so much better for you.”

Peterson says the diner really is a jack-of-all-trades kind of place, as she and her staff have been known to deliver wood in blizzards. Her dad, Bobby Hayes, who’s the minister at Tennelina Church of God three miles up the road, keeps 20 gallons of gas on hand in case any passersby run out. “You’ve got to take care of the people,” Peterson says. “Most of the time when customers say, ‘Where’s the mall?’ I’m worried. If you don’t hike, you don’t bike, you don’t raft; if you don’t enjoy the peaceful relaxation of the mountains — you know, sit back get a massage, do a soak — Hot Springs is really not the place for you.”