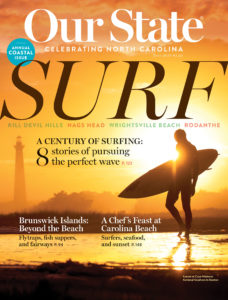 Back in the Day: First in Surf

More than a century ago, Wrightsville Beach became the first successful community to bring surfing, a popular West Coast sport, to the East Coast.

June 2018 Welcome Letter: And Many More

Our State celebrates its 85th birthday this year, but for its employees, it feels like Year One.

Our State Quiz: Below the Surface

With more than 5,000 shipwrecks lying off our shores, it’s no wonder that the North Carolina coast is known as the Graveyard of the Atlantic.

In this quaint, laid-back town in Onslow County, every turn leads you back to the water.

At Wehrloom Honey, Aron and Jessica Wehr turned a sweet gift into a passion they share with the community.

In Carteret County, a market between the sidewalk and the sound pays tribute to coastal history.

Whether you’re a wave chaser in search of a surfboard or a coffee lover looking for a pick-me-up, Annex Surf Supply has you covered.

Toad & Wee: Off to the Races

At Millbridge Speedway in Salisbury — where go-karts roar around a red-clay track — a family on the hunt for excitement hits pay dirt.

A Cherokee Elder’s Words of Wisdom

Lloyd Arneach shares the tribal lore that helped shape him — and his people.

More than 60 years ago in Davie County, hamburger met pimento cheese. The rest is history.

Our State: The Photo Essays

Ramblin’ Man: His Time, Her Time

When an avid outdoorsman marries a devotee of Crystal Coast no-wake zones, compromise is a necessity.

At a rural crossroads in Halifax County, black farmers chart a new destiny for their families through the Tillery resettlement program.

Beyond the Beach: Brunswick Islands

Chances are, one of our southern barrier islands — Bald Head, Oak, Holden, Ocean Isle, or Sunset — has been your beach for years. Look beyond the sand and surf, and you’ll find charming villages, acres of nature, and signature fried seafood, generations in the making.

If This Wave Could Talk

It might boast: Outer Banks breakers are the envy of the East Coast. Or it could share a tale: The world’s best surfer first got his feet wet in the shadow of Cape Hatteras Lighthouse. Ask nicely, and it might divulge a secret or two: About legends and landmarks — even where to find a clam cookout or a fine fish supper. After all, our waves have plenty of those, too.

The Towns: Where Sea Meets Soul

A Feast of Love

Craig Love has turned surf culture into his own culinary style. Now, he’s got a kitchen full of surfers — from managers to cooks — who share his deep appreciation of the sea and all that it provides.

In the 1980s, three Atlantic Beach surf shops — Bert’s, AB, and Marsh’s — gave teenagers a social network as connected as Facebook and as immediate as Twitter. Before long, surfer fads turned into fashion, gossip became news, and young people found their community.

Legendary East Coast surfer Jo Pickett travels the world, chasing waves. But she makes her home in Wilmington, where Carolina’s blue swells remind her of family and the importance of living fearlessly.

If you want to learn to ride the waves, one of the world’s best surfers is more than happy to teach you.

Cool evenings and plenty of sunshine inspire us to head outside, where outdoor dramas, open-air concerts, and berry festivals beckon.

North Carolina remembers its most fearsome pirate — and one who tried his best, bless his heart.