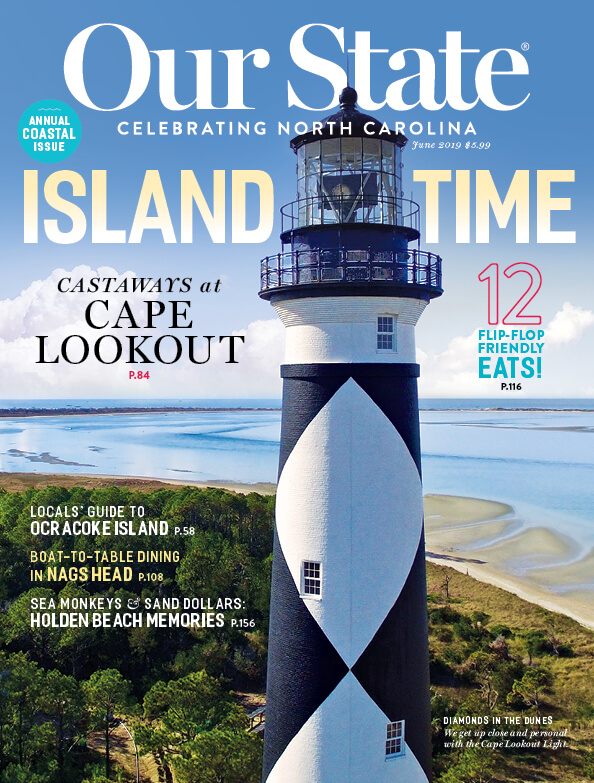 From Elizabeth Hudson: As Good As It Gets

Plates piled with seafood enhance and expand our enjoyment of the Carolina coast.

Sheltered from ocean waves, the gentle waters of our state’s sounds are the gateway to our favorite islands.

A revitalized Uptown district is helping this college town become a trendy city that stands on its own.

At a therapeutic riding center in Rockingham County, brave kids are beating the odds — with the help of some noble steeds.

The Shack in Corolla

Coffee shop by day, beer garden by night: For beachgoers in the northern Outer Banks, The Shack is an all-day affair.

When your pet is in need of pampering, leash up and head to a Triangle-area store designed for the furry, feathered, and fabulous.

Sure, lakes and swimming holes offer refreshing fun — but how many have a diving board? A new generation falls in love with the nostalgic charms of the neighborhood pool.

In North Carolina, there are plenty of fish in the sea — and lakes, rivers, and streams. You don’t need a rod and reel; just visit your local fishmonger and get cookin’.

Mornings with the family behind Belcross Bake Shoppe in Camden promise hot biscuits and a warm welcome.

Lazy beach days are never long enough. But for a taste of the season that lasts and lasts, saltwater taffy comes pretty close.

What a gift, those great shifting sandbars — a 325-mile-long string of them, clustered up and down the Carolina coast, looming so large in the history of our state and in our lives. The bridges and ferries, the wild dunes and crashing waves, the beach houses and fish dinners. Year after year, we return to the islands.

A Guide to Ocracoke

Where in the world is Ocracoke? For many mainlanders, the island accessible only by ferry, boat, or plane remains a mystery. For those who live there, it is home to past and present, change and stasis, a tight-knit village and wild woods filled with centuries of secrets.

Keepers of the Light

There are no bridges to Cape Lookout, no roads along the 56 miles of islands. In the seven years that Ron and Joan Preloger have come here to watch over its iconic lighthouse, they’ve survived raging storms and swarms of stinkbugs. They wouldn’t have it any other way.

A summer camp, a beach resort, and a community retreat: Hammocks Beach State Park in Onslow County — and its epic, sugar-sand beach — inspired generations of teachers and their students. Now, it awaits rediscovery.

Finding local seafood at a coastal restaurant isn’t always easy. Two fishermen (and one unlucky flounder) explain why eating hook-to-fork is harder than it looks.

Whether you’re looking for a shrimpburger, a fish taco, or a double-scoop ice cream cone, these restaurants know that a beach vacation should never stray too far from the sea.

Pioneering environmentalist Rachel Carson, author of Silent Spring, began her writing career on a 2,300-acre network of islands a short paddle south of Beaufort. At the reserve that now bears her name, marine scientists follow in her wake.

The Lure of the Fly

A bottom fisherman will fish with anything — even a yardstick. But a fly fisherman requires more precision from his equipment, especially when casting from a kayak off Masonboro Island. Either way, a successful trip isn’t measured by what you catch.

High Tide on the Rocks

Following family lore to the wilds of an unihabited island, a brother and sister find plenty of local residents hiding in plain sight.

When a beachgoer on the Crystal Coast loses a beloved bauble to the sea — say, a class ring or an heirloom necklace — one local comes to the rescue.

The Holden Beach island vacations of childhood are still there, if you know where to look.

As the racism of the Jim Crow era comes to a head, the push for equality gains momentum. In North Carolina and across the South, the seeds of the civil rights movement take root.

On the meaning we find in a cemetery, the tokens we leave behind, and the clarity that comes with loss and time.

From home tours to blueberry festivals, your curated monthly guide to events across North Carolina.

In 1899, Erasmus Midgett saved 10 people from a shipwreck off the North Carolina coast — and started a family tradition.