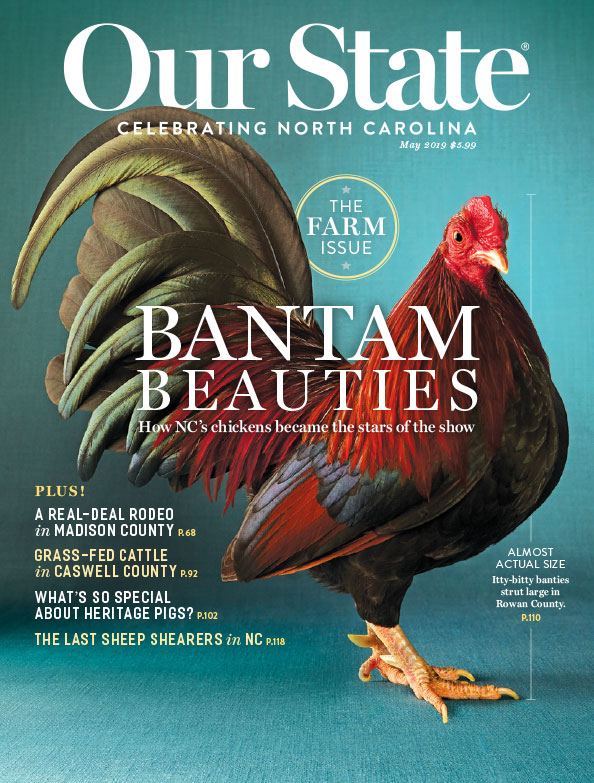 A little town in the center of North Carolina reminds our editor in chief that what makes a place memorable is the soul and the heart you find inside.

In its parks and its art, its food and its beer, this former tobacco hub embodies the spirit of local.

On their lavender farm in Orange County, one couple shares the scent of southern France with those in search of a little peace and relaxation.

A shared “front lawn” downtown provides a space for community and collaboration, fun and friendship, among people from all walks of life.

In Tandem Gallery in Bakersville

At a gallery in Mitchell County, an artistic couple showcases fine ceramics that are made to be admired and used.

When a dog joins the family, it’s like adding another sweet, spunky, speedy child to the pack.

Everything but the Pig

A pig pickin’ must have barbecue; that’s a given. But what’s a cookout without an array of tasty sides? We’ve got a few for your table.

Don’t let the name fool you: When it comes to pairing sips and savories, Old North State Winery offers so much more than cheese and crackers.

Locopops makes the frozen treats you remember from childhood — only better.

Words to Live By

Writers in Hillsborough keep their friendships close — and their adored, clickety-clackety story machines even closer.

The tobacco fields and church pews of an eastern North Carolina childhood taught an acclaimed haiku poet how to see, feel, and hear the landscape — one syllable at a time.

A most unlikely poet takes an analog approach to public art in the digital age.

Eight seconds aboard a bucking bronco? Only the boldest riders would dare try it. At the longest-running rodeo in North Carolina, cowboy culture hangs on.

The Cowman of Caswell County

A trained engineer with a love of farming found his calling in rolling green hills and a herd of white, French cows.

On this Rockingham County farm — past the barn and beyond the pasture — a herd of pigs roots and runs in the forest. Far from feral, these animals are being raised for restaurants and grills. But until then, they — and the couple who runs the sustainable farm — are living their best lives.

Each year, nearly 600 chickens (and their proud owners) flock to the Rowan County Fairgrounds to compete for the heady title of Old English Game Bantam Champion of the World. When global poultry dominance is at stake, it’s hard not to ruffle a few feathers.

On a typical sheep, one year of fleece growth will yield three sweaters. But there are precious few shearers to tend all of the flocks in North Carolina. For the last traveling shearers, an age-old trade has become a kind of modern artistry.

The Kids Are All Right

The most popular club at some North Carolina high schools is nearly a century old, but it’s as relevant as ever. Energized and optimistic, members of the Future Farmers of America are shaping the state’s agricultural path forward — not just in fields, but in labs and offices, too.

The ingredients for the perfect Mother’s Day breakfast: a big bloom, a little mess, and a lot of love.

Amid the rise of autos and airplanes, a Wilmington-based railroad company struggles to hold on, supported by passionate advocates until the last passenger train leaves the station.

The appeal of surf fishing goes way beyond the catch of the day. On the Outer Banks, anglers cast for bluefish and red drum — becoming one with the wind and waves.

The Python with a Purple Heart

How a soldier rescued a Burmese python from a dinner table during the Vietnam War and brought it back to North Carolina.