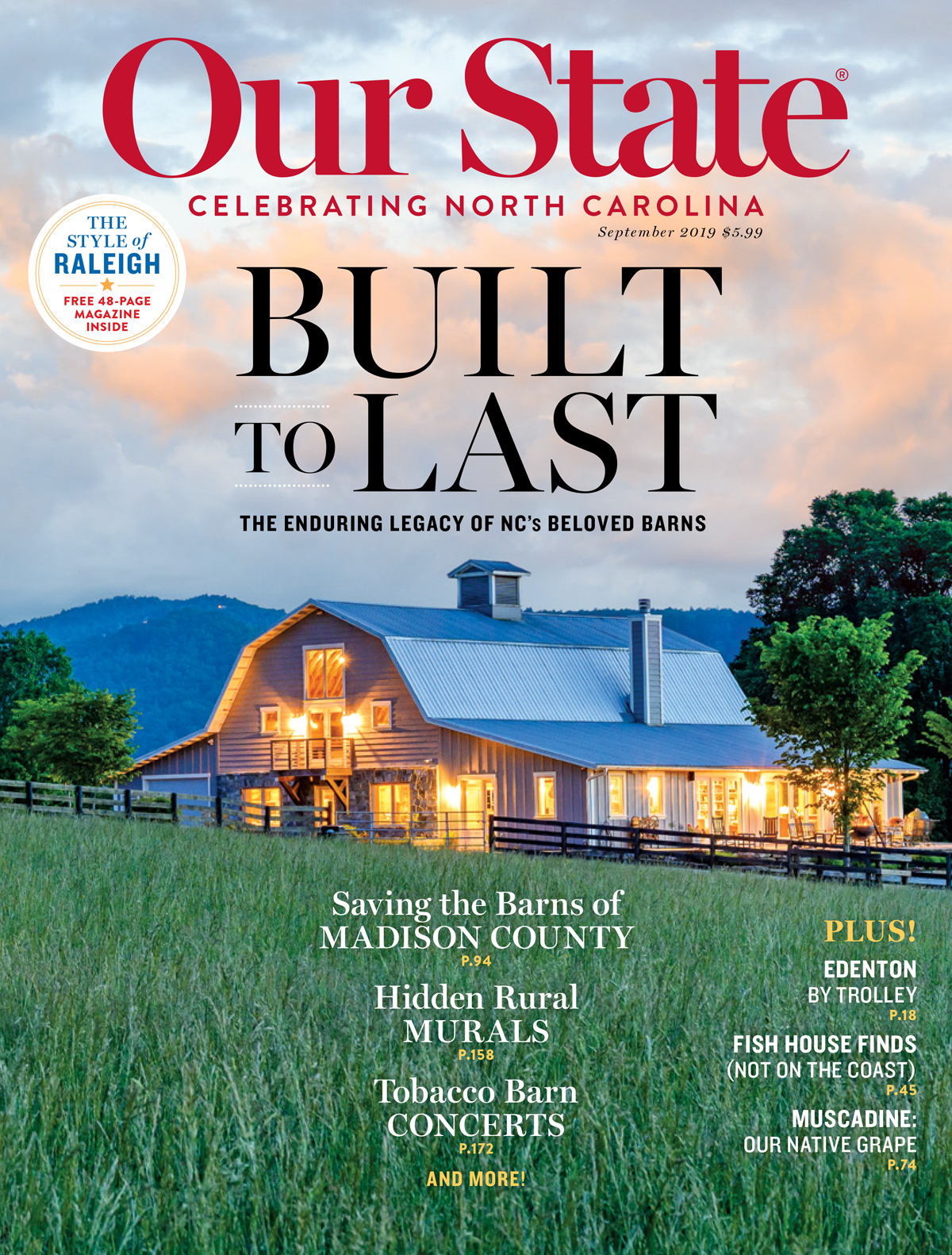 When our editor in chief falls ill on an out-of-state trip, she’s reminded that no matter where she is, home is never far away.

Every town has a “main street” — even if it’s called something else. But each of these distinctive streets has something extra special.

Climb aboard: A trolley offers a unique vantage point from which to explore this waterfront town. But as a seasoned tour guide can attest, a great ride is about much more than names and dates — it’s about making connections.

A restaurant, an online farmers market, two cookbooks: This couple is tending a crop of nourishing ventures. And it all starts on their farm in Orange County.

The Friendliest Sound in Wilmington

At the North Carolina Ukulele Academy, students bond over new skills, cheerful melodies, and the harmony of community.

On the bank of the French Broad, a local outfitter gives back to the waters that sustain it.

For a kid, growing up means testing the waters, kayaking out a little farther. For a parent, it means watching from the dock and trying, at least, to play it cool.

The “morel” of the story: Mushrooms add substance and depth of flavor to appetizers, sides, and entrées. We’ll tip a cap to that.

The House of Fish

An unassuming cinder-block building in Moore County proves to be the perfect stage for one chef’s take on “classic American soulful seafood” — and plenty of his star power.

The owners of Postal Fish Company delight in introducing Pittsboro diners to lesser-known (but mighty tasty) fish from North Carolina waters. The result is a sustainable menu that changes with the tides.

The Barns of Madison County

Tobacco barns once dotted the Appalachian landscape in the thousands, before a government buyout in 2004 brought an end to that way of life. Now, passionate locals are recording their stories and giving these iconic structures a second chance.

Through the Looking Glass

A 79-year-old barn in Transylvania County transformed one man and his family, just when they needed it most.

For three days each month, the owners of Chartreuse Barn in Thomasville give the cavernous old space new purpose as a vintage goods shop — and deeper meaning as a peaceful retreat.

Since 1983, hikers and wanderers traveling the pass between Roan and Hump mountains have taken refuge in a simple red barn known as the Overmountain Shelter. Little do they know, they’re following in the footsteps of revolutionaries.

The Fairest of Them All

In Pinehurst, an unusual barn once served as an exhibition hall for livestock and a stump for local politicians, who’d snap their suspenders and make big promises. Today, this restored barn in the heart of horse country hosts weddings, dinners, and even rock concerts.

by Jeremy B. Jones

On a farm in a cove in the Smokies, a biologist turned cheesemaker is bringing a slice of woods back to life. Like a pebble tossed into a pond, every careful decision she makes, every creature she cares for, has a lasting effect on the forest she’s trying to save.

History in a Handbag

In neglected barns and abandoned pickup trucks in eastern North Carolina, a seamstress finds old, forgotten stories — in the form of vintage fabrics — that she makes new again.

by David A. Graham

A retired city planner finds his calling photographing the barns and historic homes of Edgecombe County. His images preserve a fading landscape while helping us see it anew.

Like your grandmother’s narrative needlework, the growing patchwork of creative designs on rural outbuildings across the state tells a larger story.

Color Amid the Kudzu

In 1999, a crew of urban artists descended on rural Moore County, painted some 25 tobacco barns and other buildings, and then zipped back up to New York City. Two decades later, folks still drive to Cameron in search of these curious murals.

On a six-acre campus of renovated barns and an old covered bridge, The Bascom gives people from the rural western part of the state a chance to experience the awe of seeing fine art and the satisfaction of bringing their own creations to life.

It started as a 50th birthday gift to a music-loving dad: Turn a 140-year-old tobacco barn on a family’s 60-acre farm near Greensboro into a stage. Eight years later, it’s a gift to music lovers across the Piedmont.

In 1789, when the newly formed federal government was trying to pass the Bill of Rights, it created 14 copies. One would remain with the federal government, and the rest were sent to the original 13 states. North Carolina’s copy went to the State Capitol, and for 75 years, it stayed there without much fanfare. And then, the trouble began.

Our Native Grape: A Guide to North Carolina’s Muscadine Wineries

A true Southerner, the muscadine is both sweet and tough — a resilient survivor in our hot, humid climate. Much like the winemakers who grow it, the story of our native grape is deeply rooted in the landscape of our state.

When two movie buffs started a film society at their local theater, they discovered a community of cinephiles waiting in the wings. Now, their international film festival has created new fans of this charming foothills town.

One of our state’s most magnificent treasures was in danger of being overdeveloped. Instead, with a photographer’s passion for natural beauty, Grandfather Mountain’s new owner opens it to all.

The cutest critters that most North Carolinians never see tend to stay above the fray. But you’d better believe that flying squirrels are there, gliding gracefully from tree to tree.

From food festivals to art shows, your curated monthly guide to events across North Carolina.