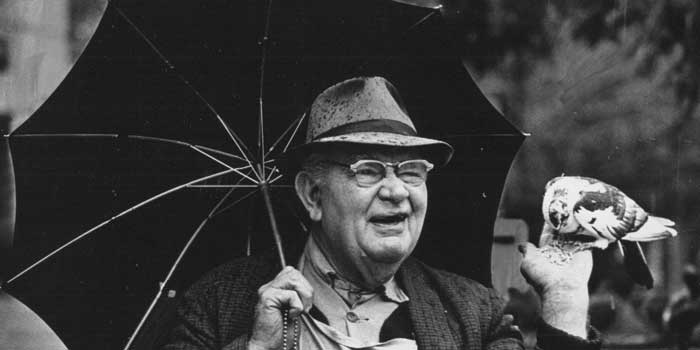 His name was Jesse Broyles, but nobody ever called him that.

He fought with the United States Marines at Iwo Jima, but he never talked about it much.

He lived to be 104 years old, but by the time he died, if anybody remembered him, it was only to ask, “Whatever happened to The Peanut Man?”

Nobody ever touched as many lives selling roasted legumes.

A decade gone, Broyles still inhabits the memory of a thousand gray-haired North Carolinians who bought pigeon food from his silver-colored cart outside the state Capitol, as much a fixture in downtown Raleigh as any legislator — a vendor familiar to everyone and known by no one.

In The Peanut Man’s era, which spanned the governorships of Terry Sanford through Jim Hunt, pigeons ranked as an attraction rather than an urban pest. They inhabited Capitol Square by the hundreds, speckled beggars waiting for a handout, their flocks attended by flocks of children.

Broyles tended his cart on the Fayetteville Street side of the square, directed there by state government muckety-mucks, who sometimes scolded him for taking shelter under an unsanctioned magnolia tree.

The Peanut Man gave the pigeons names — Speck, for example. He served as a sort of Southern Mary Poppins, urging the capital city to feed the birds, tuppence a bag.

A place in the world

Seeing him was a treat. On any day, in any weather, he tended his peanuts over a charcoal fire — as constant as the governors’ statues and much more highly regarded by the square’s feathered residents.

“That was his spot,” says his niece Frances Nowell of Wilson. “The pigeons would land on him. On his hat, on his shoulder. They were not afraid of him at all.”

But like so many men who become close to animals, The Peanut Man lived on uneasy terms with other humans.

He served twice with the Marines, joining for the second time during World War II, living through the worst of the Pacific fighting. His wife moved to California to be nearer to him while he was stationed at Camp Pendleton.

But once he came back, Broyles hardly spoke, even to his family. He was too shell shocked to function.

He went to school for a while on the G.I. Bill and worked for a time as a bookkeeper in Raleigh. Today, people would say The Peanut Man had post-traumatic stress disorder. But he never got a dime’s worth of disability. Back then, nobody thought he had anything wrong with him. He moved upstairs into Nowell’s family house in Oakwood near downtown, and for 20 years, he didn’t do much of anything.

Finally, with the war long over, after years of nightmares, Broyles ventured out into the world again. He got a job roasting and bagging peanuts, distributing them around Raleigh, manning his post outside the Capitol.

Here, he could talk, interact with people, find his place in the world.

“I think there, he almost became another person,” Nowell says.

Few pigeons walk through the square today, much less a peanut vendor. Both may as well be extinct in downtown Raleigh, and the characters who walk the streets, the familiar people everybody notices, are just as rare. People walk through here in a hurry, and the muckety-mucks still push along the people who don’t.

The Peanut Man died in 2003, meriting a few sentences on the local obituary pages. But almost 20 years before Broyles’ death, longtime columnist A.C. Snow wrote these lines for The News & Observer: “Raleigh needs a new peanut man. It is not an occupation that comes easily for every man. Like the ministry, you have to be ‘called.’ ”

You have to love the little things and see that they get cared for in the big, careless world.

Josh Shaffer is an award-winning writer for The News & Observer in Raleigh. His most recent story for Our State was “Ayden” (September 2012).