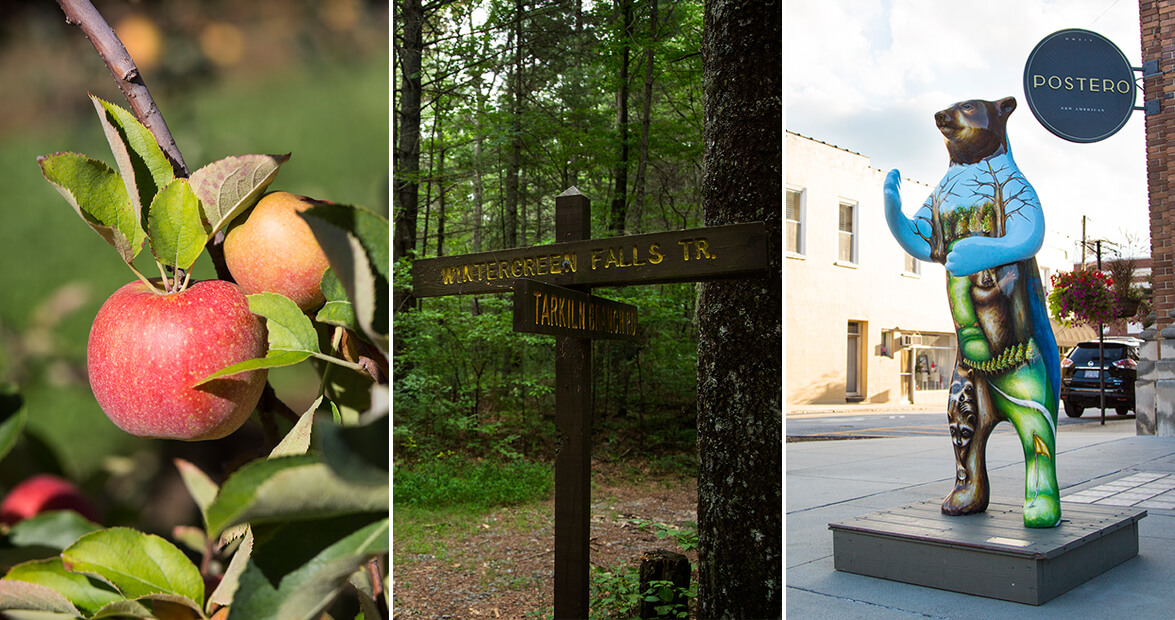 Indulge in a proper mountain breakfast

There’s a time and place for elaborate coffee drinks and expensive brunch entrees, but driving down Highway 64 at 8 a.m. is not that time. Instead, turn into the gravel parking lot of Autumn Leaf Café, where inside, wooden ceiling fans spin lazily and people sit at oilcloth-covered tables. There’s no fluff on the menu, just flavor — unless you ordered the hot cakes, which are very fluffy — featuring straightforward breakfast items like omelets, biscuits, breakfast sandwiches, and French toast. For a little taste of everything, the Autumn Leaf Breakfast Special is a safe and popular choice: farm-fresh eggs, homemade biscuits smothered in thick gravy, creamy grits, and sausage or bacon on the side. Autumn Leaf Café is undisputedly authentic; authentically local, authentically country, and authentically Southern. It operates cyclically — the restaurant makes breakfast from fresh ingredients purchased from local farmers, and the local farmers come in to enjoy said breakfast — so you know that what you’re getting is the real deal. As a visitor, you’ll probably be the last to arrive and the first to leave when you come for breakfast, as people move around you from table to table playing musical chairs, saying hello to neighbors and friends. They are interrupted only by the coffee pot as its brought around to top off diners’ mugs as everyone relaxes, frozen in this moment, thoroughly enjoying the morning.

Downtown Hendersonville is home to more than 100 shops and 20 restaurants, and a stroll down Main Street is a great place to start exploring the attractions that make Hendersonville unique. While first-time visitors can spend a full day enjoying well-known attractions such as McFarlan’s Bakery, Team ECCO Ocean Center and Aquarium, a show at Flat Rock Playhouse Downtown and a post-theater dinner at Postero, the busy district demands a return visit. Start your day on the corner of North Main Street and Second Avenue, the site of the historic Henderson County Courthouse and current home of the Henderson County Heritage Museum, home to collected artifacts related to milestone events in the region. If it’s a Tuesday, Thursday, or Saturday, head down Second Avenue toward North Church Street to the Henderson County Curb Market, which has been in business since 1924. Vendors must be residents of Henderson County and either hand make or locally grow their products, including baked goods, crafts, flowers, and produce. Come back to Main Street and continue walking north, taking the time to meander and stop into shops as you please. Upon reaching Fourth Avenue, head into the Mineral & Lapidary Museum and don’t, we repeat, don’t skip the introduction presentation upon entering — it really colors the experience. Admission is free to explore the gems, minerals, and fossils hidden in this literal treasure trove, but if you’d like to bring the magic home, you can pay to crack open a personal geode as a phenomenal souvenir.

Looking for a fun scavenger hunt to do with kids? Try to track down all 20 of the 2017 Bearfootin’ Bears on Main Street! The statues are painted by local artists and are part of a nonprofit fundraising project. They will be on display through the summer before being auctioned off in October.

Check out the product that put Hendersonville on the map

To come to Hendersonville and not have an apple is like going to Lexington and not having barbecue; the region is the largest apple producer in North Carolina and one of the top ten producers nationwide. Hendersonville is home to a collection of unique pick-your-own apple orchards, so it’s no surprise that you’d be hard-pressed to find a local that can objectively tell you which orchard is best. You’ll have better luck finding an orchard to visit by asking more specific questions, such as Where can I find the best apples for pie baking?, or Which farms have started serving hot cider? A unique way to enjoy Hendersonville’s apples is by paying a visit to one of the many cideries in the area. Appalachian Ridge Artisan Cidery is the oldest cider producer in the region, however its cidery — housed in an old, restored barn — is the newest expansion this year for its parent company, Saint Paul Mountain Vineyards. “Apple is a natural fit,” partner Barbara Walker says. “The beer companies have kind of tried to take over the ciders, but it is a wine. So our wine maker blends different varieties of apples just as you would grapes.” Ciders here are unpasteurized, sparkled, and aren’t made from concentrate. “We try to do everything we do Normandy-style, since that’s traditional ciders,” Walker says. The cidery is currently in the process of planting 5,000 apple trees imported from Normandy, and it selects staff members to study cider making in Normandy during trips to France throughout the year. It offers six varieties of cider, which vary in sweetness depending on the types of apples used, and are bottled in wine bottles. The cidery also plans to offer apple brandy tastings, and an option to bottle your own brandy straight from the barrel in the future. But for now, the most important part of the experience for Appalachian Ridge is the connection between drinking cider and appreciating the apple culture in Hendersonville. “Vineyards are traditional, you sit in the vineyard and you drink your wine. Cideries have not been that way but we wanted to create a cidery where you’re in the orchard yourself,” Walker says. “Where can you sit and say ‘the apple from that tree right there is in my cider.’”

It’s only fitting that you’d spend some time outdoors during a trip to the mountains, and DuPont State Recreational Forest is a great spot to do so. Shared by Henderson and Transylvania County, the 10,000-acre forest is a popular spot to hike, mountain bike, and horseback ride throughout its 80 miles of roads and trails. Several scenes for The Hunger Games movies were shot in this forest which makes certain sections of it popular with tourists, but if you’re in the mood for more privacy and less Panem, stick to the Henderson County side of the forest and head over to Wintergreen Falls. The path to the 20-foot waterfall is wide and undemanding, which makes it pet and family friendly, and is often sparsely populated, making for a perfect waterfall snapshot at the end. Those looking for an extra challenge can attempt to find a second, hidden waterfall nearby named Upper Grassy Falls (here’s a rough guide). If you are able to find it, the falls allegedly have a sandy beach below that you can triumphantly relax on and enjoy the view.

Barbecue joints that serve only barbeque? Great. Barbecue joints that also serve fried chicken? Sure. Barbeque joints that also serve wood-fired Neapolitan pizzas? Now that’s different. “Not all people like barbecue,” Flat Rock Wood Room General Manager Jamie Guay says. “We realize that and want to give them a choice.” Here, you’ll find thin-crust, Neapolitan-style, oven-baked pizzas featured proudly alongside barbecue, with the same dedication and love to creating it that can be found in the meats. And if you’re here for the barbecue, you’re in good hands — Flat Rock Wood Room specializes in Memphis-style barbecue, focusing on dry rubs and herbs. “We don’t want to sauce everything up,” Guay says. If you need a sauce, you can find several varieties on each table, though you won’t see many customers using them. “They want to appreciate the pork for the flavor of the smoke.” Hickory, oak wood, or apple wood goes into the smoker the night before, and the next morning out comes brisket, sausage, pork shoulder, ribs — and let’s talk about those ribs for a second. Tender, flavorful, melt-in-your-mouth ribs; “They are championship ribs,” Guay reminds, and for good reason. But if you’re truly loyal to your Carolina barbecue, you can still sink your teeth into a delicious piece of meat. The Waygu Burger, made from a high quality, high marbled Kobe beef ground from scratch, is this season’s “it” entrée. But regardless of which entrée brings you in, when you do pull into the parking lot of Flat Rock Wood Room, you’ll likely have to do a full circle, twice, before you find a spot. Even the pouring rain doesn’t keep diners from flocking; which means Flat Rock Wood Room is clearly doing something right.