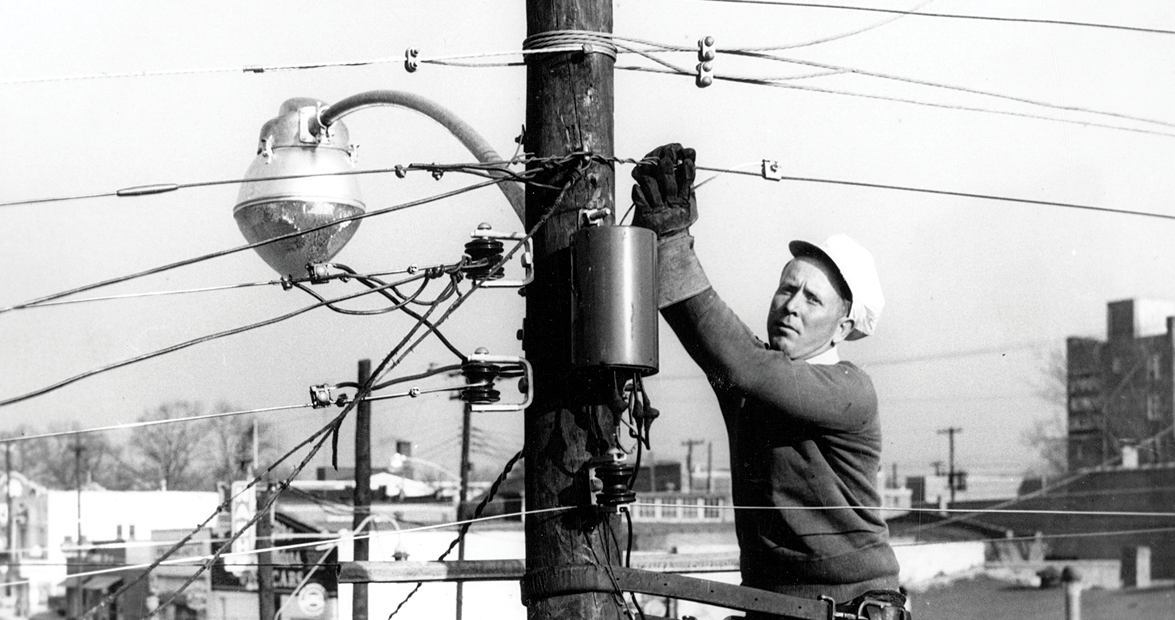 EDITOR’S NOTE: This story originally appeared in the November 2014 issue of the magazine as part of its Tar Heel History series.

Scott Faulkner dangles atop a 40-foot pole overlooking Mount Airy. A slender leather strap figure-eights around him, one loop around his bulky frame, one loop around the wooden pole. Metal spikes “no bigger than ink pens” jut from his boots, tiny cat’s claws keeping him from a four-story tumble. Death coils around him like a silent, invisible snake, but Faulkner is nimble, skilled, and he knows how to avoid it. He also knows that many like him have not been so lucky.

Faulkner is not a thrill-seeker. He is a line-crew foreman, and this is his job.

Electricity pools around him in a transformer, shoots through lines zigging and zagging from Mount Airy outward in all directions, illuminating, powering, rolling, whirring through our homes, across our streets, and into our stores and factories. To understand Faulkner and the power he tames and gives, we need first to go back more than 120 years, when North Carolina was in the dark.

In the early 1880s, the world had electric fever. Thomas Edison’s bright lightbulb first flashed in 1879 but, like most new technology, was years from working in homes. Instead, large cities like London and Paris replaced the gas lamps that lined their streets with arc lights that snapped a bow of electricity between two electrodes.

In 1881, the Arista Cotton Mill in Salem (now Winston-Salem) flipped on North Carolina’s first electric lights. The arc lights ran off a generator, helped workers avoid accidents and work longer hours, and ignited a fascination with electric lights that soon spread to Raleigh, Charlotte, and New Bern’s city streets. By 1888, North Carolina’s urbanites could stroll safely after dark. To save money, many cities shut off the lights on full-moon nights.

The demand for lighting grew. Power companies like Thomson-Houston Electric Light Company began popping up like fireflies in summer, using “dynamos” to convert mechanical energy to electricity and selling it to cities.

City dwellers petitioned for well-lit homes, and power companies happily recognized the untapped profit. They hired linemen to erect light poles and connect power lines between poles and residences. Ground men, or “grunts,” ran materials to the linemen from the ground. With little understanding of this emerging technology and no safety procedures in place, the work was dangerous. 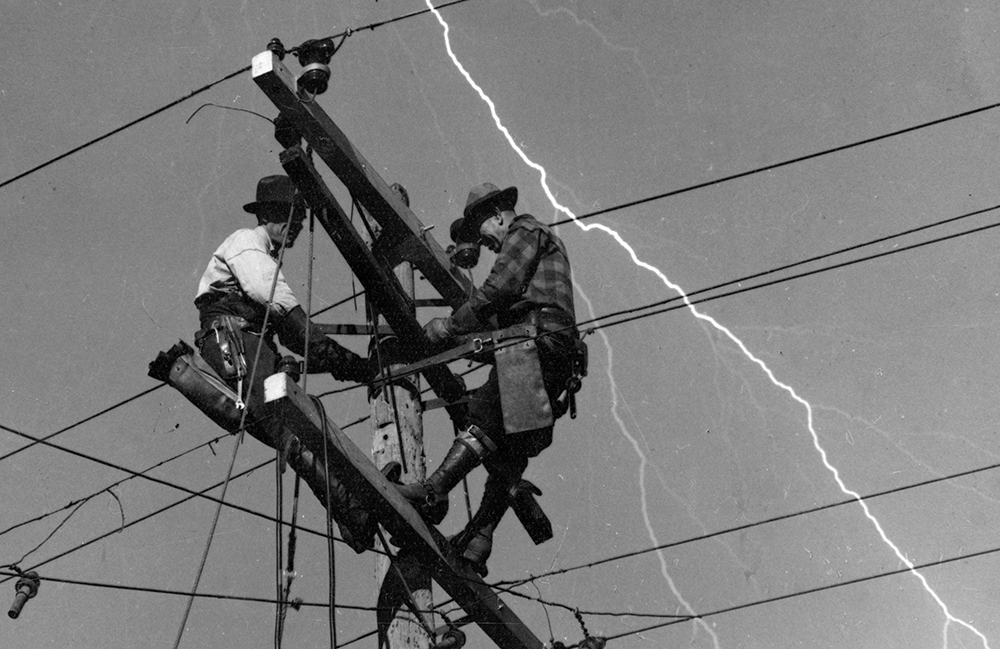 Between the end of the 19th century and the middle of the 20th, linemen worked to bring North Carolina into light. photograph by State Archives of North Carolina

John Stackhouse, owner of the former Stackhouse, Incorporated, a construction company, worked as a lineman for the relatively new Carolina Power & Light Company in the early 1930s. “They didn’t have inspectors back then,” he says. “Or if they did, I didn’t know about them. And there wasn’t such a thing as fiberglass, like they have in the bucket trucks today. But times were so hard. This was the ’30s. There wasn’t anything such as training. You just learned on the job.”

Murray Walker, cofounder of the International Lineman’s Museum in Shelby, says that the linemen’s high pay could not compensate for their dangerous work. “One out of every two linemen died from 1880 until the early 1900s,” he says.

Meanwhile, to bolster the public’s need for electricity, power companies sold appliances, touting simplification of residential chores like laundry and cooking. “The Carolina Power & Light Company sold Kelvinators, stoves, and mainly electric irons,” Stackhouse says. “The main reason is they were trying to build up the power that the people used. On Sunday afternoons, I’d load my bicycle with irons and peddle them. If [a family] had a light bill, I could sell them an iron that would take out 10 to 15 cents a month from the light bill.” Before long, city dwellers couldn’t imagine life without the ease power provided. But rural areas still went to bed when the sun went down.

Until the 1930s in North Carolina, only urbanites enjoyed electricity. Profit-driven electric companies saw little incentive to power rural areas. “Electric-company profits were driven by the persons per square mile,” says Jane Pritchard, director of corporate communications for the North Carolina Association of Electric Cooperatives. “So most of us were still in the dark.”

In 1935, President Franklin D. Roosevelt established the Rural Electrification Authority (REA) to help farmers power their land. During the next 20 years, linemen laid tracks for many North Carolinians to see electric light for the first time.

Myrna Fulford of Lowland was 10 years old when her home received power in the late 1940s. Before that, she and her brother Henry did their homework by flame light, and their mother washed sheets by boiling them in an iron tub resting on a wood fire. “Just getting electricity was a miracle,” she says. “We had one light in each room, hung from a cord.” Fulford says her father and other Lowland men readied the countryside for electricity by erecting power poles before the linemen arrived.

Tom Blizzard was 5 years old when they ran lines to his hometown, Deep Run, in the 1930s. “The linemen were out putting up the poles and lines outside our house. I strolled out and asked a lineman why it didn’t shock him,” he says. “He told me it was because he ate rubber soup. That satisfied me until that night, when my daddy straightened me out.”

Bringing power to rural areas was not easy work for linemen. Without roads, Stackhouse says, electricity workers drove through riverbeds to lay lines: “At the time of the REA, we ran lines right through the woods and across swamps and all. Building those lines through the mountains, you would hire everybody in the holler and put them on the payroll. You’d have to pay them even if they weren’t able to work, to keep them from damaging your equipment. When you got up to the top of the next ridge, they would all quit and you would hire the people in the next holler.”

Even today, some areas don’t have power, like the far corners of the Appalachians. In these places, it can be hard to lay lines through the rocky terrain. “Up there in the mountains, you have to have a bulldozer to pull in your truck,” says Faulkner. “Sometimes, they still use mules up there to drag poles in.”

In other places, residents have decided power isn’t something they need.

By the 1960s, nearly every home in North Carolina was illuminated. We made our own starlight. We threw it into the night sky, from cities to the edges of habitation.

Picture the night sky — can you? Are you picturing the sky you really see at night, the sky you remember, or a sky you’ve seen on an electrical device? Do you see the soft orange or green hue glowing into the darkness from your city or town?

“When I first started flying airplanes, you could pick out the towns at night from their lights,” says Stackhouse. “Coming from the North, the ground was filled with lights until you got to the Mason-Dixon line. From there down, the ground was dark, and the sky was filled with stars. In the late ’70s, area lights lit up the country. Now, you can’t tell the difference.”

Although our state’s central nervous system of power courses through our towns, the linemen’s work is far from over — and far from safe. Today, linemen rig power to new construction and bandage the old. All the while, electricity surrounds them. Current is quick, silent, odorless, invisible, and lethal. It seeks ground and takes the most direct path to get there, from trees to roots, fingers to feet, through hearts or livers, muscles and ligaments. It scorches those who touch it from the inside out, a deadly streak through the body’s system, sometimes causing deep burns, sometimes killing.

In the 1970s, Stackhouse saw so many members of his line crew badly burned by electricity that he and his employees helped found the North Carolina Jaycee Burn Center at the University of North Carolina at Chapel Hill. The facility helps those who haven’t been as lucky as Stackhouse was over the years. Even today, with safety standards and new technology that insulates and protects, like rubber hoses, blankets, gloves, and sleeves, the job remains perilous, among the top 10 most dangerous jobs in the United States. 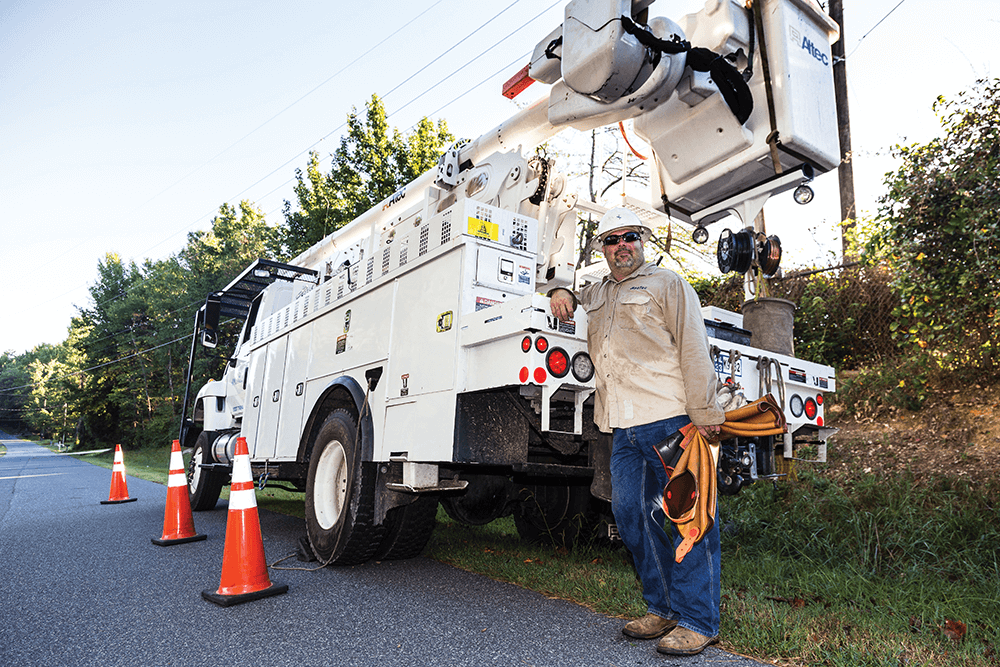 Today, Scott Faulkner carries on the work done by early linemen, but with modern gear and, fortunately, many more safety regulations in place. photograph by Julian Charles

“Electricity’s the most unpredictable thing you’ll ever come across,” says Faulkner. “If you’re working on a pole, even if you have it covered up, and a car hits a pole three poles down, it’s going to send a ball of fire to you.”

“Today, we average a lineman fatality every week across the United States,” says Walker.

Often the unnoticed first responders to disasters, linemen sometimes leave their families in the dark so they can power others’ homes. When we’re left in darkness after an ice storm or a hurricane like Fran, it might be difficult to see the people who drive through the night across treacherous landscapes to bring us power again. But they’re there, harnessing and distributing volts, helping restore our lives.

“Sometimes I have to leave my family in the cold to go put others’ lights on,” says Faulkner. “But if you make a line hot in the middle of the night and see everybody’s lights come on? That’s a good feeling. You say, ‘At least they’re going to be comfortable for tonight.’”

Power itself has changed across North Carolina. What once pulsed only on a heartbeat of coal or water’s rush now also throbs to the thump of splitting atoms at nuclear plants like Shearon Harris in New Hill, or blazes to the ancient energy of the sun at solar farms across the state. The jump and snap of arc lights now glow cool with halogen or LED. And although life without power makes for a nice weekend adventure, many of us would be left in more than the dark, with no way to acquire gas for our cars, no hospital access, no credit cards.

For now, Scott Faulkner and his linemen peers are still responsible for illuminating towns across our state, providing the power we don’t see until we miss it. Today, Faulkner sees another kind of power pushing open the day. He sways on his pole in Mount Airy and watches the sun peek above the horizon.

“Up there on the pole, all of a sudden it hits you; all of a sudden it’s daylight, and you can see what you’re doing without your headlamp on,” he says. “You look out across the ridge and the sun coming up over it. It makes you kind of warm-feeling, you know? You’re doing something that matters; plus, you get to see a lot of sunrises.”

Here, even while strapped to the present, we can still unplug.