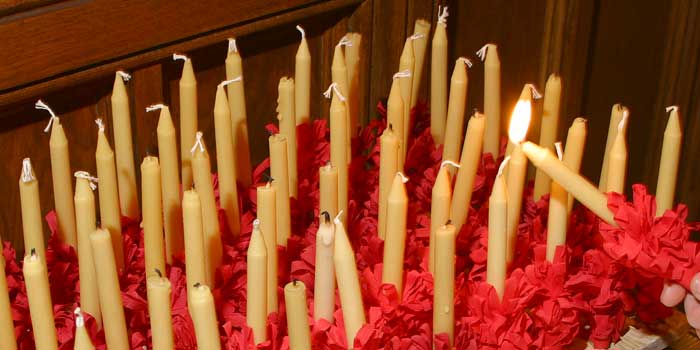 A simple meal is an integral part of the Moravian lovefeasts in the church sanctuary, in addition to songs, fellowship, and a Christmas message from the church’s pastor, the Rev. Dr. James L. Doss.

Peace Moravian holds three lovefeasts on December 24. One is a children’s program in the afternoon, complete with sugar cookies and hot chocolate, while the other two are more typical lovefeasts in the afternoon and evening, with lovefeast buns from a bakery and mugs of coffee from a church recipe prepared in large coffee makers.

“The coffee is a very sweetened and creamy coffee – lots of cream and lots of sugar,” says Lynn Jones, head diener at the lovefeasts. (“Diener” is a German word meaning servant.)

Jones leads 22 women and men from the congregation, who act as dieners, serving the meal and distributing beeswax candles trimmed in red frill.

Churches can sometimes be precise in their standards for dieners. Jones knows of a church where all of the bows are tied in the apron strings to look identical.

In some churches, the role of diener is passed down through families, she says.

One year, a child about 8 years old was helping Jones with some tasks. “You want to be a diener when you grow up, don’t you?” she asked the girl.

The Christmas Eve lovefeasts at Peace Moravian Church in Charlotte are well-attended by visitors who enjoy a simple meal along with candlelight, songs, and fellowship. photograph by Charles Brown

“No, I want to be the head diener,” Jones says the girl replied.

That girl is now a college student, and Jones looks forward to her assuming the role of head diener someday.

Because of time constraints and the difficulty of baking their own lovefeast buns in the quantity required, Peace Moravian sends someone to purchase buns each year from Mrs. Pumpkin’s Bakery-Deli in Winston-Salem.

“They have a really nice taste,” Jones says, noting hints of spice and citrus in the sweet buns.

Some folks like to make sandwiches from the buns with the addition of ham and mustard, she says, though this isn’t the way buns are served for the lovefeast services.

Peace Moravian expects a full house at their lovefeasts. About 200 young people go to the children’s service, and another 500 to 600 people attend the two traditional lovefeasts, Jones says. In fact, she explains, lovefeasts are so popular with visitors that it’s best to arrive early to be assured of finding seats.

Jones describes the services as beautiful and “the perfect way to start Christmas.”

The most important thing about the lovefeast is, “That may be the only time some people really hear the real meaning of Christmas,” she says.

The dieners are on their feet a long time during the lovefeast, but it’s all worth it: “You walk out of here feeling like you’re walking on air,” Jones says.

Combine boiling water, shortening, sugar, and salt. Cool to lukewarm and add yeast (softened in lukewarm water). Mix to smooth batter with 1 cup flour. Mix mashed potatoes and eggs and add to batter. Cover and let rise in warm place for 2 hours until light and bubbly. Add rest of flour. Knead lightly on floured surface. Let rise again in greased bowl until doubled. Punch down. Grease pans. Spread dough thinly. Cover and let rise until doubled. Sprinkle brown sugar and cinnamon on top. Punch holes with fingers and fill with butter (about an inch apart). Bake at 375 degrees about 20 to 25 minutes. Dough can also be formed into lovefeast buns.

(Recipe from Marie Weber Nodine, her mother’s recipe, in A Serving of Peace)