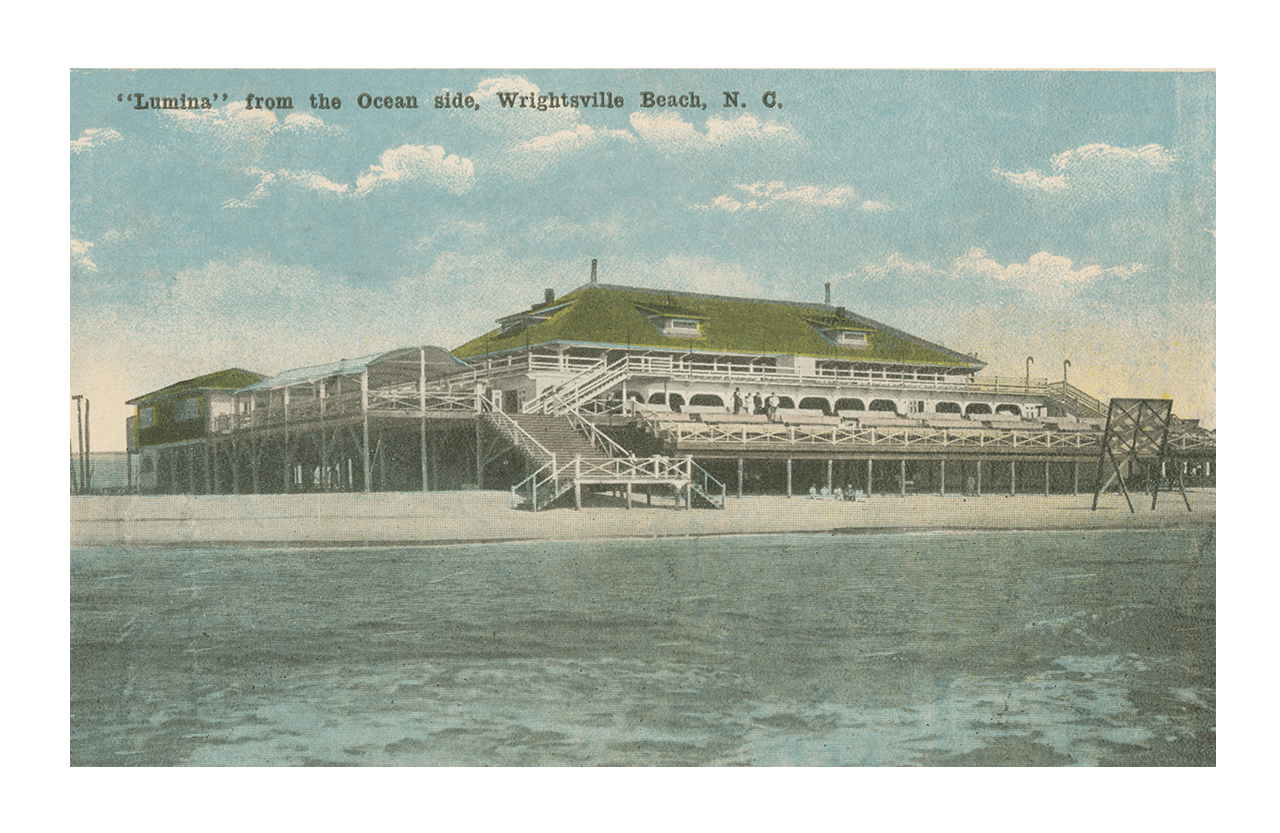 The glowing pavilion in south Wrightsville Beach went by many names. It was called “The Pleasure Palace of the South,” “The Fun Spot of the South,” and “The Palace of Light.” But no name fit the pavilion better than the one that shined for years in brilliant letters on its roof: Lumina.

Hugh MacRae, who owned Wilmington’s electric utility, opened Lumina in June 1905 on a lot near the final stop of Wrightsville’s electric trolley line. He intended for Lumina to entice people to ride the trolleys and begin using electricity. More than a thousand incandescent bulbs illuminated the three-story, 25,000-square-foot dance hall. The building was so bright that sailors navigated their ships by it.

But Lumina was more than just a well-lit dance hall. Its ground floor featured a promenade with a bowling alley, restaurants, and a movie theater. The ballroom on the second floor contained a restaurant with a fireplace for cold nights and a balcony for orchestras and big bands, like Cab Calloway’s or Louis Armstrong’s.

From its opening, Lumina was a huge success, and it soon expanded, doubling the size of the ballroom and adding a movie screen that rose from the surf some 50 feet out to sea, so audiences could watch films on the beach. It attracted enormous crowds; The Wilmington Star once reported that, in Wilmington, “if a woman didn’t have a Saturday night date for the Lumina, she was in disgrace.”

Lumina was a glowing beacon, calling out to everyone who could access a trolley and wanted to have fun. But when North Carolina began constructing highways in the area in 1935, it marked the beginning of the end of the trolley system. The last trolley car ran in 1940, and though Lumina remained popular into the 1950s, its best days were behind it. Automobiles could access the beach, and with them appeared more options for entertainment. Then in 1954, Hurricane Hazel damaged Lumina, and by the 1970s it had deteriorated so much that officials condemned the icon.

Bulldozers demolished the building in May 1973. Condominiums eventually replaced it. “Only when it was gone did we realize what was lost,” says Harry Warren, a researcher with the New Hanover County Museum in Wilmington.

Today, the once-proud “Pleasure Palace of the South” exists as a fond memory. The annual Lumina Daze festival at Wrightsville Beach’s Blockade Runner Resort commemorates Lumina Pavilion’s carefree atmosphere with an evening of food, big band music, and dancing. As Herbert O’Keef, a Wilmingtonian and former editor at The News & Observer, wrote in the 1950s, “… where there once was the Lumina, now there is a legend.”