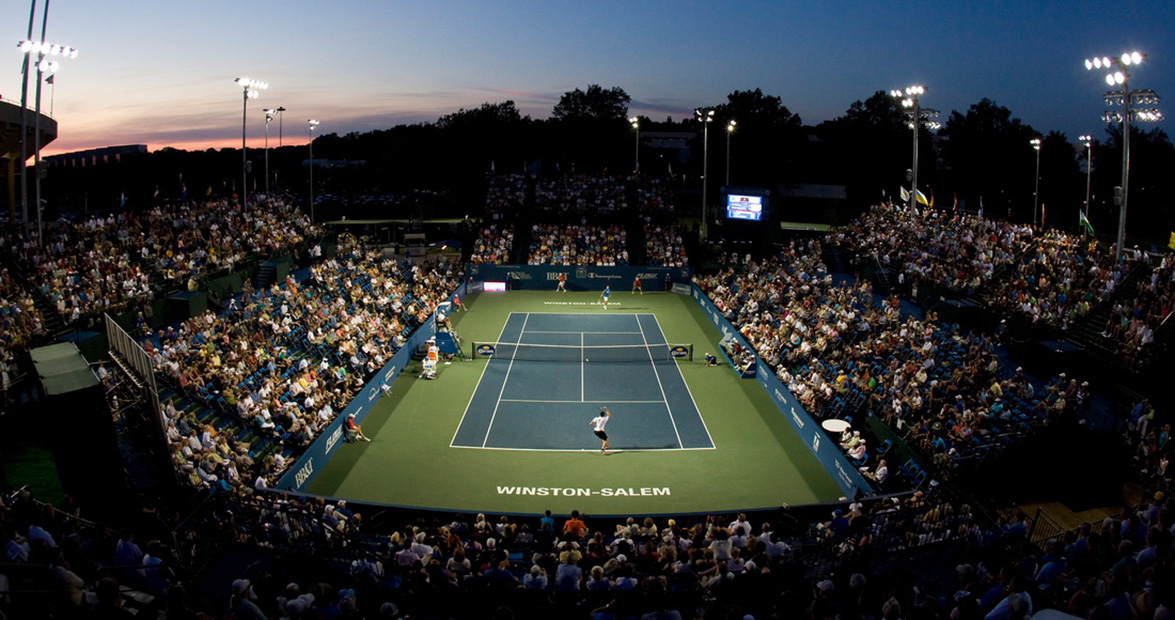 1884: The state’s first tennis court is built in Chapel Hill

Professor Francis P. Venable’s appreciation for sports was well-documented, so his desire to build the University of North Carolina at Chapel Hill’s first sand-clay court was unsurprising. Intercollegiate athletics had made their debut at the university earlier that year, and Venable felt that it was the perfect time to introduce a new sport. The school’s University Lawn Tennis Association was established shortly thereafter, and intercollegiate competition began the following decade, though the sport didn’t receive varsity status until 1908. Over the years, the university added more tennis courts and began hiring coaches, providing a level of attention and dedication to the sport more serious than even Venable could have imagined. Now, his contributions have blossomed into a successful tennis program that, serendipitously, won its 1,000th men’s dual match 100 years after Chapel Hill’s first court was built.

By the turn of the 20th century, tennis had found a home in the idyllic resort community of Pinehurst. While most visitors spent their recreational time on the renowned golf courses, the opportunity for year-round tennis play eventually piqued the interest of wealthy Northern tourists, who came down to enjoy Pinehurst as a winter retreat. Soon, the idea to create a tournament in which Northerners could spend a few days swatting tennis balls instead of snowflakes in the middle of January was proposed.

Beginning on January 23, 1911, a crowd gathered at The Country Club to watch as competitors from Chicago, Pittsburgh, Brooklyn, and other distant locales competed in men’s and women’s singles and doubles events. Tarboro native Henry Clark Bridges, the only North Carolinian competing, held his own throughout the men’s singles tournament but ultimately lost in the finals to Irving Wright of Boston on January 28. The competition was held annually — later rebranding itself as the North and South Championship — until the beginning of World War II.

Dr. George “Doc” Simkins Jr.’s contributions to the civil rights movement in Greensboro were legion, including to the city’s tennis community. A pioneer in integrating sporting events, Simkins participated in Greensboro’s first interracial tennis match at Windsor Recreation Center in the ’50s to promote the sport within the local African-American community. Several years later, he faced off against Greensboro officials over a city-sponsored tournament. His doubles team had been denied entry due to their race; when they were finally permitted to participate, Simkins and his team won their division.

Simkins’s greatest contribution to the tennis world, though, came in 1964, when he organized Greensboro’s first amateur athletic competition between a white player and a black player. Arthur Ashe and Allen Morris competed in an exhibition match that widened the public’s perception of how civil rights and athletics could, and should, be married. Simkins was “truly a drum major for justice and equality in this community,” former Greensboro mayor Yvonne Johnson told The News & Record in 2001. “He’d go to any length to make sure people had equal opportunities. Though he was behind the scenes, his power was out front. There was a respect and awe people held for him.”

1975: The North Carolina Tennis Hall of Fame is founded

Created by the North Carolina Tennis Foundation — which was organized in 1961 — the North Carolina Tennis Hall of Fame, located in Greensboro, inducted its first four members in 1975. The hall of fame was organized to celebrate those achieving excellence and recognition for both themselves and the state through the sport, including talented players, notable coaches, and avid supporters of the tennis community. The three newest members — Paula Hale, former president of the United States Tennis Association Southern; North Carolina tennis champion John W. Quick; and Dr. Simkins Jr. — were inducted in early 2018, bringing the total number of members to 96. Today, those looking to learn more about and celebrate North Carolina tennis history can take public tours in the first state tennis hall of fame in the country.

Residents of Winston-Salem, like all Americans, found themselves frozen in the aftermath of the September 11 terrorist attacks. But for one weekend in October 2001, the Twin City rallied in support of six tennis players representing the United States in the country’s first international sporting event since the tragedy. That year’s Davis Cup World Group Qualifying Round match between the United States and India was projected to be an easy win for the U.S., but after 9/11, the event took on even greater significance and catapulted it into the national spotlight.

The U.S beat India 4-1, but for the crowd and the players, the score was one of the smaller takeaways of the day. “I think we were the first people to wear USA and represent the USA in a team competition after 9/11,” Andy Roddick, who played in the match, said in a 2017 interview with Winston-Salem Journal. “So I’m not sure how you get more emotional and meaningful than that.”

2011: The Winston-Salem Open is organized

One decade after the Davis Cup qualifier, professional tennis returned to Winston-Salem — this time for good. A professional men’s tournament previously held in Long Island, New York, and New Haven, Connecticut, was sold to Winston-Salem Professional Tennis and reorganized as the first Winston-Salem Open in August 2011. The city stepped up to show some Southern hospitality: Seven hundred people volunteered their time, and more than 50 corporate, nonprofit, and individual sponsors contributed $2 million to ensure the tournament’s success. Local tennis players vied for one of the two wildcard spots to compete against the professionals. In a fitting Carolina finish, Greensboro native and tennis icon John Isner took home the inaugural event’s trophy.

This year, 48 singles players and 16 doubles teams will compete August 19-25 for more than $700,000 in prize money, with qualifying taking place August 18. The tournament, part of the ATP World Tour, is the final competition of its series before the U.S. Open. It also won the ATP Tour 250 Tournament of the Year award in 2016.

In May 2018, Winston-Salem’s status as a mecca for world-class tennis training and play was highlighted again. The pride felt after Wake Forest’s men’s tennis team won its first D1 national championship title was made even sweeter by the fact that it happened on the team’s home court. WFU’s win against The Ohio State University made it the first North Carolina team to ever win the competition, and only the 15th different team to take home the title in the history of the championship.