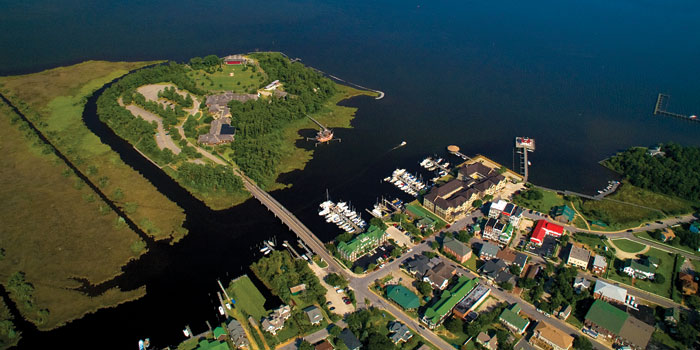 It happens somewhere out in the middle of Croatan Sound, just about halfway over the Virginia Dare Bridge, when the black swamp of the mainland coast drops away and the low scrub of Roanoke Island creeps into view. If a nor’easter is brewing out at sea, that dark, piney tree-line will jut up against a sky of dull steel. All you can hear by then is hard wind and the metronomic thump of your car’s tires on the seams in the concrete. And then you realize, right before you come to the bridge’s end, that this dark shape on the horizon, this island, is what they saw. The first ones to arrive in the New World. The lost.

Now, 400 years later, you’ll land on Roanoke Island and head northeast, toward Shallowbag Bay, to Manteo, the island’s traditionally mercantile hub. A town of only a thousand people, Manteo has a gravity and permanence to it that makes it different from the rest of the Outer Banks — it’s the last real year-round community before you hit the beach, its soil the farthest east where crops will grow. But even so, the place’s New England-style charm can make you forget how significant, how old, it all is. American history stretches back so far on Roanoke that time here isn’t measured in years, but in generations.

You may already be familiar with these basic details of the island’s colonial past, which predates Jamestown, Virginia, and Plymouth, Massachusetts: Under a charter from Queen Elizabeth I, Sir Walter Raleigh sponsored the 117 English citizens who landed on Roanoke in the summer of 1587. Despite uneasy relations with the local American Indians, that group of pioneers lasted several months. But that winter, a ship containing much-needed supplies became delayed for three years. John White, Roanoke’s governor, returned from England in 1590 to find a dismantled, abandoned settlement. The fate of this famed “Lost Colony” has never been determined, but the mystery has inspired countless theories, from royal sabotage to alien abduction.

In a town where many founding families arrived decades before the American Revolution, “old” and “new” are relative terms. That original bridge to the mainland, built in 1957? That’s new. Manteo Booksellers has been in business almost 30 years — that’s new, too. In fact, if you can’t trace your genealogical roots on Roanoke back at least a hundred years, then the label “off-islander” will become, in the nicest possible and most welcoming way, permanently affixed to your name.

It makes sense, if you think about it: After their American-Indian predecessors, these folks have been in North Carolina longer than any of us; their families have lasted through four centuries of merciless hurricanes, winter gales, fires, and floods, with very little help from or connection to the outside world. They’ve plowed the land and fought the vicissitudes of the sea. So when they say “old,” they mean it.

“When I went to Raleigh for the first time — I was 5 years old — it felt like a completely different planet,” says John Wilson, Manteo’s former mayor, whose family has lived on Roanoke for nine generations. As he speaks, he sips an evening martini in his living room at the Roanoke Island Inn, a stately house on Fernando Street that once belonged to his great-grandmother. “I had never seen an elevator, or an escalator, or even a stoplight. People forget this, but Manteo was essentially shut off from mainland North Carolina for a long, long time. We didn’t even have a bridge to Norfolk until 1930, much less one to Mann’s Harbor. We were, for all intents and purposes, a piece of Virginia Tidewater. Even now, it takes fewer hours to drive to Manhattan than it does to drive to Murphy.”

Sybil Ross, one of Wilson’s many cousins (In his high school class of 46 students, Wilson was related to 38 of them.), has similar memories of her childhood in Manteo. “If you come from Roanoke Island, you’re first and foremost a survivor,” she says from a perch in front of her yarn shop’s large window. “Back when I came along, 64 years ago,” she says, “most children were born at home, with midwives. I was; I guess I cost my mother about $25. The closest hospital was almost three hours away, so people out here had to learn to depend on each other, to handle things themselves.”

This isolation, the time before the bridges, is hard to imagine now, when you walk along the town’s graceful boardwalk, past the rolling banks of sea oats, where the air is full of salt and the waterfront docks are full of pleasure-craft. In the summer, children on bikes weave through Manteo’s narrow streets and vault off the footbridge to Roanoke Island Festival Park. A few hundred yards away, over the causeway to Nags Head, the true beach begins, and with the sand come the billboards, the chain restaurants, and the inevitable pressures of commercial development.

Somehow, through careful planning and community participation, Manteo has withstood those pressures. It has pretty much kept things the way they’ve always been. The same family has run the town’s one-screen movie theater since 1919, for example. You can still drink liquor on the street — Manteo is the only place in the state where you can.

“For such an old, multigenerational place, the island is remarkably welcoming to outsiders,” says KaeLi Schurr, who directs the Outer Banks History Center. “But when off-islanders come here and demand things done a certain way — as in ‘this is how we do it where I’m from’ — well … that doesn’t really go over.”

And maybe that’s a good thing. Roanoke Islanders take such obvious pride in their beginnings that history — as represented by the occasional faux-Tudor architecture, gothic signage, and the good-natured Elizabethan outdoor drama The Lost Colony — sometimes obscures the more nuanced personal histories here, the ones that will never make it into textbooks. But go grab a beer at Poor Richard’s, and anyone at the bar can tell you that it’s Mollie Fearing’s pimento cheese recipe you’re eating. You’ll see a big, triumphant wooden sign in front of the door where someone has carved all the names of the century’s major hurricanes, as though the storms were enemies the islanders had driven back and vanquished.

Or head south to Thicket Lump Marina in the fishing village of Wanchese, and watch the guys from the docks trudge into Annie Davis’s Great Gut Deli after a long day. When they come up the stairs, Annie always has copies of Sport Fishing and Marlin magazines waiting for them. She knows how they want their Reubens and shrimp salad prepared. There are no secrets, but there are also no strangers here.

This is what it means to survive: as a culture, as a community. This is how history endures and progresses, in these small moments. And this is why, despite the legendary disappearance of those original colonists, nothing has been lost on Roanoke Island. Nothing at all.

Bronwen Dickey writes regularly about travel and the environment for Oxford American. Her work has also appeared in Houghton Mifflin’s Best American Travel Writing 2009, Newsweek, and Outside magazine, among other publications. In 2009, she received a first-place Lowell Thomas Travel Journalism Award and a MacDowell Colony residency grant. She lives in Durham.