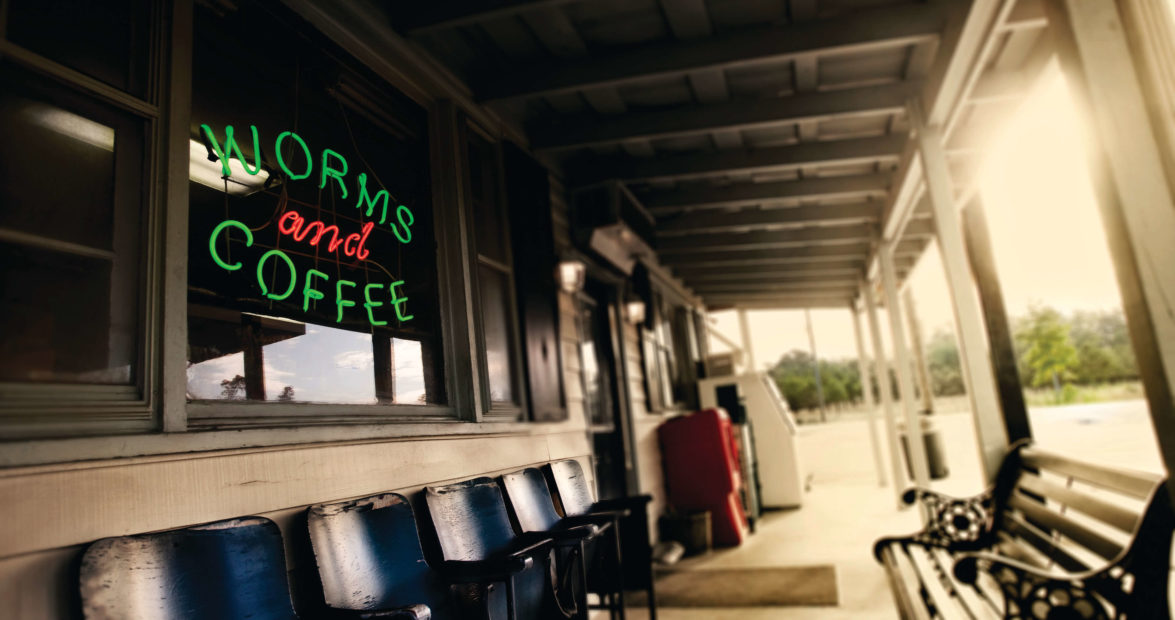 You should see this coffee cup. It’s a brown mess. With just the occasional rinsing-out, it’s been the only cup he’s used for weeks. “Four weeks,” he clarifies for me through a crooked smile. “That’s one-two-three-four.”

For one full month, this fella has poured cup after cup of tough-nosed black coffee into the same piece of white Styrofoam — for exactly 85 cents a refill.

He is a carpenter. Blue-collar work. He wears a T-shirt and jeans, with a lifetime of hammering and nailing on his face. Each morning, when he has work, he stops at the same familiar convenience store, opens the same familiar door, sees the same familiar faces behind the counter, and treats himself to a fine, familiar cup of coffee on the way to the job site. He counts out his coins, carefully, down to the 85th cent.

His name is Mutt. He knows the owner. The owner’s name is Mike.

“Time for another cup, don’t you think, Mutt?” Mike says.

“Don’t worry,” Mike assures him. “I’ll still charge you for a refill.”

It’s 9:10 a.m. on a Tuesday at the Midway Trading Post, the only convenience store on this 14-mile stretch of N.C. Highway 211 heading toward Southport. Mutt is the last of the morning coffee rush. The sign in the window glows fluorescent: “Worms and Coffee.”

Somewhere, at this same moment, 9:10 a.m., someone is in a high-end coffee shop ordering a cup of coffee that’s made of the finest-quality beans, freshly roasted, ground coarsely, dropped into a clean French press, and flushed with premium, boiling-hot water. The whole experience is topped with soft music, a leather chair, and a place to plug in a laptop. The cup costs about $3.95, or $4.05. Whatever it comes to, just keep the change. That’s the coffee shop way.

In Mutt’s cup is Maxwell House. With tap water. From an automatic-drip machine. For 85 cents. But he’s got this fresh, new cup, thanks to the familiar owner. And it’s good. So good. That’s the Worms and Coffee way.

Quest for the cup

I know plenty of people who’d find this trifling. They order those French-pressed coffees. They pay with debit cards. They sink into the leather chairs with iPods and laptops, and don’t talk to anyone. They go into public, only to be alone.

One day a few months ago, while in one of those shops, sitting in a leather chair, watching people with iPods and laptops, I started to realize how much coffee-drinking had changed for me. Years ago, my dad was captain of a charter boat. Captain Fred, everybody called him. I spent many a summer morning as a teenager working as his first mate. On those mornings, about an hour before sunrise, I’d hop in the passenger’s seat of his truck, and, inevitably, I’d crunch yesterday’s Styrofoam under my feet. The sound was unmistakable, memorable, cozy.

There in that coffee shop, in that leather chair, I thought about those mornings. And I decided: In an era when you can dress your coffee up with whipped cream, chocolate, a shirt, tie, and top hat, I would find the perfect cup of gas station coffee — the jeans and a T-shirt kind.

When I drove around town, I stopped. When I drove out of town, I stopped. For anywhere between 79 cents and $1.49, I poured it. And I lingered, if only briefly, just to listen. People talked to me about the weather. People offered to let me go first when we got to the pot at the same time. People said, “Mornin’, bud.”

Soon, I learned about the place near the coast, the one with the fluorescent sign in the window: “Worms and Coffee.”

“You must be Mike,” Mike Richards, the owner of the Midway Trading Post, says to me as I walk into his hardwood-floored store.

“Better than good,” he says.

I pull one from the Styrofoam stack, tilt the pot, and pour. There is only one pot here, but Mike keeps it running. He must, to stay true to the fluorescent sign. He can never run out of worms. He can never run out of coffee.
The first person who walks in is a young man, looks to be about 22 or 23. He buys a Red Bull and a Pepsi. Mike doesn’t know him.

Another man walks in, about 30. He buys two green teas in bottles, an apple pie, and a Full Throttle energy drink. Mike doesn’t know him.

Another man walks in. He’s wearing a Capital Ford hat and a flannel shirt. He’s about 40. He fills a Styrofoam cup. A coffee drinker. Mike knows him.

“Oh, better than good. You gonna get anything done today?”

The man is in a hurry, and stressed. But he laughs.

“Already been a helluva day, Mike. And today’s my anniversary on top of that. I guess I’ll take her to McDonald’s or something.”

The man sags his shoulders and pushes the door, spilling out, as if he’s falling. Mike laughs.

“We have a lot of fun here,” Mike tells me. “Sometimes, I glue quarters to the floor. And when it won’t come up, they’ll laugh. I’ve glued bottles to shelves. Just to have fun.”

Another man walks in. His face is tanned, and his hands are dirty. He has a beard, sunglasses, and wears a T-shirt advertising a construction company. He grabs a Styrofoam cup.

“Put that other dollar away. Got two cents right here,” Mike tells him.

“Sure. I’ll just take it out of my college fund for myself.” Mike is 65 years old and bought the Midway Trading Post in 1993 after retiring from telecommunications. He’s not going to any college anytime soon.

“Thanks, Mike.” Rusty sighs. “Alright. Let me go see if I can’t get somethin’ done today.” Rusty walks out, hangs up the gas hose after filling his truck, and drives off, having given Mike only $1 for gas and coffee. He got two free cents from Mike for the coffee. He forgot to pay for the gas.

There are 119 different nonalcoholic drinks inside “Worms and Coffee.” Mike and I counted. There’s everything from Pepsi to Pepsi Max, Gatorade to Snapple, Nehi to Cheerwine.

There’s only one pot of coffee.

“I don’t even do decaf,” Mike says. “Nor do I serve quiche.” He says it as if the two go together, in some weird, far-off, complicated world where people rip the caffeine out of coffee and bake egg in a pastry.

In fact, in here, that world does seem far away, and far more complicated. Everything in the store is made of wood — the walls, the counters, the shelves, the floors. The original floor planks are sturdy, and whine only a little when I walk over them. Even the chairs outside on the front porch are wooden chairs from an old movie theater. Inside, the place smells not clean or dirty, smells plain and pure, smells like a place where everything’s made of wood.

Next to the coffee pot is a sign with the prices: “Large cup is $1.10. Part of a large cup, $1.10.” Nearby is a jar of pigs knuckles. I tell Mike I’ve never had a pigs knuckle. He looks at me like I’m chowing down on a big plate of quiche.

A few years ago, in Fayetteville, I took my dad to one of those today’s-world coffee shops, the ones with the $4 coffee.

The woman behind the counter was in a hurry, not very friendly, and was trying to get a banana muffin for someone, while trying to fix a latte for another. It was loud, lots of people, lots of music. Dad started to flick the tip of his thumb against the inside of his index finger; it’s what he does when he gets nervous. The woman behind the counter handed us the cups and said very little.

I realized then, I’d never heard my dad talk about the taste of coffee before. He drinks about a full pot by himself every day — maybe more since he gave up smoking after 50 years recently. So many of our conversations have occurred with a Styrofoam cup in his hand. This was the first time I’d heard him talk about the taste.

It’s as if, when nobody told him, “Mornin’, pal,” he didn’t know the next line of his daily conversation script. Nobody asked him about the weather.

So, over and over, he kept saying it. “This is a really good cup of coffee.” Inside that created coziness of the coffee shop, all there was to talk about was the coffee.

I only hear one side of the conversation.

Mike doesn’t require his customers to pre-pay for gas. If they drive off, he’ll just catch them when they come back through. He trusts them.

Mike is proud of his gas. A sign hangs out front of the store. “Our gas contains 0 percent ethanol. Great for marine and other uses. Check your gas mileage.”

The coffee, the conversation, the gas — it’s all here in its simplest, rawest, purest form.

When Mike and his wife, Carole, bought the old trading post in 1993, he started rotating signs out front of his new business, trying to draw people off Highway 211. One of them said, “Stop by and say hi. Be a part of yesteryear.”

But after about three weeks, he got tired of changing the sign all the time. So when he started to get a little business from one of the slogans — “Worms and Coffee” — he stuck with it. Over the last 17 years, pictures of the sign have appeared on David Letterman and Jay Leno. In 2009, a local writer, Lisal Kayati, won a national short-story-writing contest for a story titled “Worms and Coffee.”

After Rusty calls back, a man in a suit hustles in and starts chatting. It’s Bill Rabon. He’s running for North Carolina Senate and he wants Mike’s support. It’s easy to see why, given the traffic the place gets. Already this morning, a couple has asked for Mike’s opinion on the sheriff’s race. Mike has his opinions. But he tries not to advertise them. He advertises the worms and the coffee.

He sells T-shirts that tout the name. He gave me one, along with the coffee. I offered to pay for both. He insisted, no, he’d take it out of his college fund.

Near 11 a.m., long after Rusty, long after Mutt, long after the Senate hopeful, after I’ve toured the whole place and counted all the drinks, two women walk in. They’re on a short vacation, up from South Carolina, they say. They’re having a good time. They’re loud.

“I couldn’t see a place called ‘Worms and Coffee’ and not stop,” one says through a drawl. “I’m gonna get some worms for my garden. Then we’ll fish with them.”

The two women walk around the wooden store, commenting on the floors and the pigs knuckles. They check out a local barbecue sauce called, “Big Moe’s,” and then it becomes clear to one of them.

“God, look at this place,” she says, her eyes starting to glass over as she holds a cup of dirt and worms. “These are the type of places I used to go with Dad.”

I stand at the edge of the wooden checkout counter, hiding my smile behind another sip from my Styrofoam.