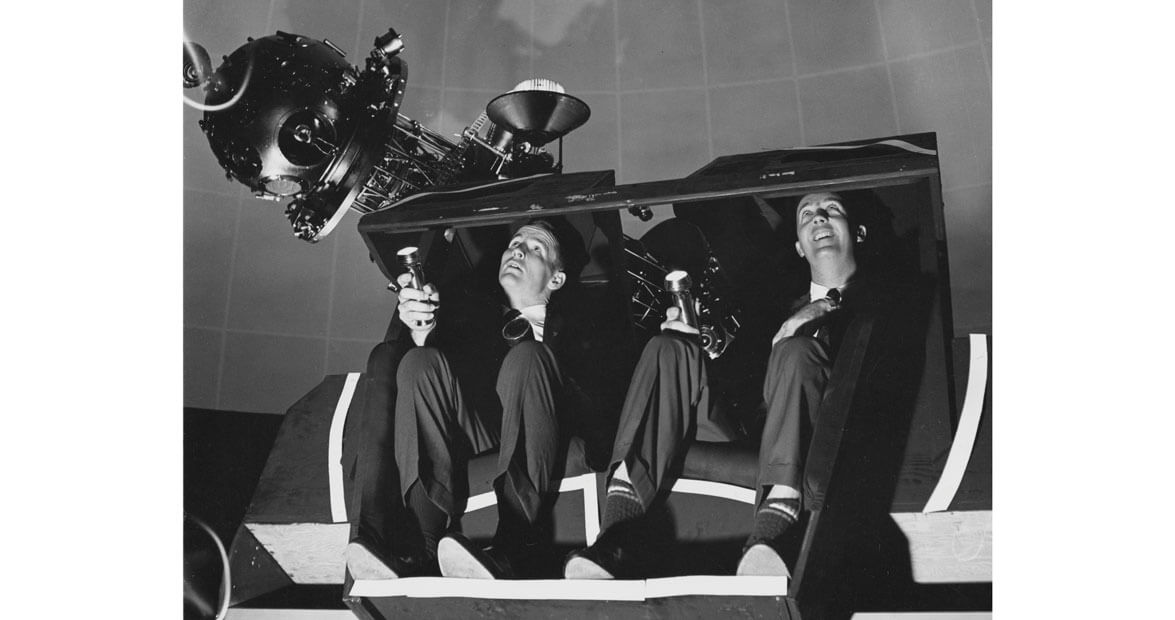 On April 14, 1970, thousands of miles from Earth, astronaut Jim Lovell received a command from NASA Mission Control: Turn everything off. That included the navigation systems. Although the order was crucial to save power, it had potentially grave consequences. Without a precise heading, their module would either burn up in re-entry or bounce off the atmosphere and sail into space.

Strangely enough, Lovell likely thought of Chapel Hill at that moment. Anthony Jenzano, the director of Morehead Planetarium, trained him for this exact circumstance.

In the late ’50s, when no one knew what the first astronauts would face, Jenzano had an idea. He proposed to NASA that the Mercury Seven needed training in celestial navigation in case of equipment failure. NASA thought so, too. For the next 17 years, right in Chapel Hill, Jenzano trained astronauts in celestial navigation. The dome so familiar to North Carolinians was in fact the “classroom blackboard” for every mission from Mercury through Apollo, including astronauts Alan Shepard, Neil Armstrong, Buzz Aldrin, and John Glenn.

Shepard, who was the first American to travel to space in 1961, told reporters that Morehead helped prepare him for his journey. “No one really knew what to expect in space in those days,” he said.

Likewise, William Thornton, a University of North Carolina graduate and a member of the 1967 astronaut class, found the instruction at Morehead valuable. He flew multiple missions and logged 313 hours in space. The planetarium and its teaching were an essential, practical classroom for the pilots. “It was a matter of life or death navigation at 18,000 miles per hour,” Thornton says.

Our own Morehead Planetarium was where the astronauts learned their stars on their way to winning the space race.

Chapel Hill was a different universe to Anthony Jenzano back then, says C. J. Jenzano, Anthony’s daughter. Anthony, who grew up as one of 10 children in a row house in industrial Philadelphia, was attracted to the town. Here, C.J. says, Anthony “thought instantly it would be a great place to bring up his children — manicured lawns, azaleas.”

But in such a small town, getting the astronauts back and forth to Morehead without alerting the hordes was a mission all by itself. The astronauts might arrive at 7:30 a.m., train until 6 p.m., and then fly out again. No one knew when they were coming except Jenzano and his staff. Richard McColman, the current Morehead theater director, says the staff developed a code. “They would only say, ‘We’ve got a cookie time coming up,’ because they served cookies and soft drinks during the breaks.”

During training sessions, the astronauts sat in a mock-up module and looked at the dome of stars through tiny windows. They first learned the basics, memorizing 37 guide stars, and then returned for mission-specific training that was accurate “down to the minute and second of what would be visible at any point,” McColman says.

On training days, C.J. snuck in the back after school, sat in the dark, and watched. “I was fascinated that they would pick this up so quickly,” she says. “They had mirror memories. They could remember everything they’d been shown or taught.”

Today in the basement at Morehead, there is a replica of the module Jenzano built for the Gemini astronauts. It’s made out of plywood and resembles a Ferris wheel car. Sitting on it feels like sitting on a cramped porch swing.

“He had a gifted ability for creating special effects,” C.J. says of her father. For example, when the planetarium director wanted a rainbow during a show, Jenzano cobbled together whatever he had — scrap metal, duct tape, empty cans of car wax — to make one appear.

This sort of improvisation was essential to the early space race. Because of his resourcefulness, Jenzano formed a special bond with the astronauts. Most were from working class families, too. “My father had a high school education,” C.J. says. “He wasn’t a professor of astronomy. They all knew that.” When NASA relocated astronaut training from Florida to Houston, they proposed relocating the celestial navigation program, too. But the astronauts insisted on Jenzano.

This bond went beyond the planetarium. Jenzano and his family opened their home to the astronauts, Thornton remembers. “Tony was a bon vivant who appreciated people and good times,” he says.

The Jenzano house became famous among the astronauts for the memorable parties. “They were family,” C.J. says of the space explorers. “We’d be expecting them Friday, but they’d fly in Thursday night to come out and have some drinks.” 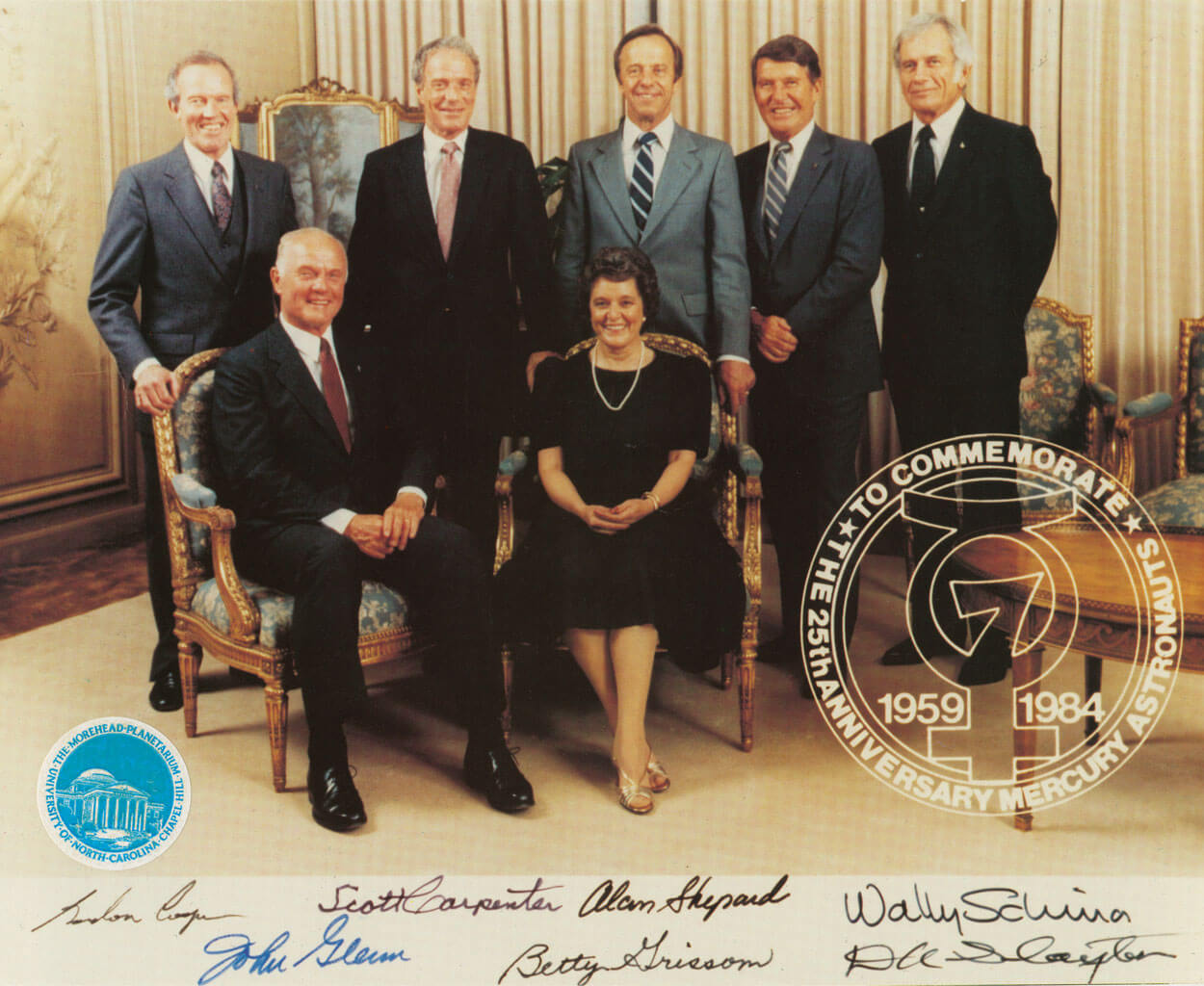 The astronauts were every bit the mischievous charmers portrayed in the media. One night, C.J. remembers, Gordon Cooper and Pete Conrad were sitting on the Jenzanos’ porch. The backups for the Gemini 5 mission, Elliot See and Neil Armstrong, were expected to join soon. “The phone rang, and my mother went inside to answer it,” C.J. recalls. “I came up behind her, and when she got off, I said, ‘Oh boy! Was it Neil?’ because I had the biggest crush on him. And I didn’t know it, but Pete Conrad had come up right behind me and heard me. He said, ‘Oh, so that’s the way it is!’ ”

Conrad then never wasted an opportunity to tease the 16-year-old girl with his secret knowledge, always inviting her to talk to or sit next to Armstrong. “But, of course, I was always across the room from Neil Armstrong because I thought he was so cute,” she says.

That was in 1965, four years before Apollo 11, when Armstrong became the first human to walk on the moon. But astronauts used celestial navigation during every Apollo mission to correct the craft’s guidance system, which had a tendency to drift out of alignment.

On at least three occasions, the training the astronauts received at Morehead actually saved their lives.

When Gordon Cooper lost his navigational computer during Mercury-Atlas 9, he had to use guide stars to keep his spacecraft in perfect orientation during re-entry. He landed smack in the middle of the recovery fleet, making his landing the most accurate of all the Mercury missions.

When Apollo 12 launched, a rainstorm produced two lightning bolts that knocked out all the electronics in the command module and followed the rocket’s contrail all the way down to strike the launchpad. Dick Gordon used the Apollo Optical Telescope to sight guide stars and realign the navigation system from scratch.

And of course, during the infamous Apollo 13 mission, Jim Lovell and his crew relied on their training when their oxygen tanks exploded. Because a debris field obscured their view of the stars, Lovell and his crew used the Earth’s terminator — the line separating night from day — to orient the spacecraft safely for re-entry.

As is often the case with new frontiers, not every mission ended well. C.J. and her family shared in that sorrow, including the launchpad fire that killed the Apollo 1 crew. Also, just after leaving a training session at Morehead, astronauts Elliot See and Charlie Bassett died in a plane crash. C.J. remembers the anguish in the house: “Mom said, ‘I don’t know if I can keep doing this, Tony. I feel like I’m losing members of my own family.’ ”

By the time the Challenger tragedy occurred decades later, C.J. had learned not to cry. But she was still in awe. “That was part of the job, and they all knew that,” she says. “That’s what made them heroes. I’ve met people all over the world, but when I’m with astronauts, I can’t even speak.”

Eventually, Jenzano’s brilliant program was outpaced by advances in navigational technology and the changing nature of NASA’s missions. “The flights we were scheduled for, orbiting around the earth — there wasn’t any need for that kind of exact navigation anymore,” Thornton says. But, he adds, “We did get to meet the famous Tony, who gave such great parties!”

Chapel Hill’s contribution to the space program resonated with the astronauts long after the celestial navigation program ended. In a handwritten letter on cream paper dated August 9, 1995, Jim Lovell wrote Jenzano about his experience training the actor Tom Hanks for his role in Apollo 13. “It has been a long time since those days at Morehead Planetarium when you taught me all about the stars. … I took him flying at night and pointed out Antares and Nunki, the two stars we saw on Apollo 13 when we flew into the shadow of the moon.”