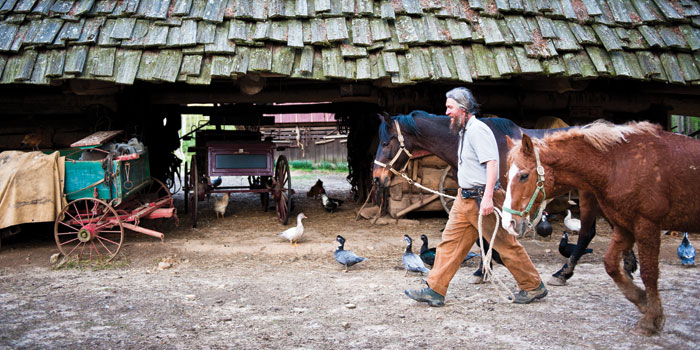 Editor’s note: This article originally ran in the July 2011 issue.

Near where the creek settles into a horizontal bed and the land levels out into a meadow, mountain man Eustace Conway drops his hammer onto a slim bit of glowing steel. The clang of metal against metal rings off the hill rising behind the blacksmith shop. He pauses, lifts the tongs toward his face, and studies his handiwork.

“What am I looking for?” he asks the semicircle of 4- and 5-year-olds gathered just beyond the forge’s glimmering heat.

“I’m looking to see if it’s what it’s supposed to be,” he answers himself.

What it’s supposed to be is a hook, maybe to hold a kitchen towel or small tool. Right now, it’s a mostly straight, orange strip cooling to black. Conway slides it back into the burning coals.

“To be able to make something,” he tells his young audience, “you have to be able to envision it.”

For the next 15 minutes or so, Conway holds the children’s attention. He’s a compelling character, a mountain man, tall with long, graying hair that falls in two braids down his chest. And what little kid is going to turn away from a singing hammer and flying sparks and the hiss of hot steel plunged into a bucket of water?

Conway smiles and laughs a lot and talks in gentle tones. He taps into the youngsters’ natural tendency to move by giving them little tasks, like throwing pieces of coal onto the forge. He keeps the questions coming: “Did you know that fire breathes?” and “Who knows what a hardy hole is?” (Answer: The square hole on an anvil.)

He has faith that the lofty point of this lesson in blacksmithing will get through. He wants them to know, by watching him turn this strip of metal into something useful, that they, too, can create and contribute.

It’s been 30 years since Conway, who was born in South Carolina but spent most of his childhood in Gastonia, moved into the Watauga County woods. He was a student at Appalachian State University when he first set up a tepee on someone else’s land. Drawing on skills he learned from his mother and his grandfather, who ran a summer camp for boys near Asheville, he hunted his own food and made his own clothes from the skins of animals he caught. He studied the plants around him and learned their benefits. He bathed in a creek. He adapted to the weather. He grew independent.

While earning degrees in anthropology and English (even then he had his own ideas about the way things need to be and wanted the words to express them), he studied American-Indian cultures and took to heart their connection to the natural world. He questioned the technologies that separate people from the planet and from one another.

He found his place in the world — close to the land.

“Everything I had learned all made sense the closer I got to nature,” Conway says.

Today, he lives in a log cabin on Turtle Island Preserve, 500 acres of forests and fields just outside of Boone where he has developed an environmental education center. This land, which he started buying when he was in his 20s, has everything he needs: timber, good soil, water, wildlife, the cool temperatures he prefers. And serenity.

Here, he can live the vision he created for himself as he stepped back from society.

Several days after the preschoolers’ visit, students from Elon University heave rocks from a garden patch into the back of a beat-up Toyota work truck. The sun’s been up only a couple of hours, but this isn’t their first job of the day. They’ve stacked logs, cleared a culvert, and hauled firewood. Before the sun sets, they will have dumped the rocks into ruts washed out by the same storm that clogged the culvert, helped cut down and clear away three trees, and filled in an area of eroded ground outside the mules’ stables.

Conway works these students hard, not just because he has a lot of work that needs to be done, which he does — he carries a small notebook with pages crammed full of to-do lists — but also because he has high hopes for them.

He hopes that by the time they leave here in three days, they won’t just know that some snakes have a smell to make you drop them or to lift with their legs when they move heavy things. He hopes more for them than the singular satisfaction that only a hard day’s work gives.

He wants them to leave Turtle Island with a new sense of themselves. And in a world as disconnected from nature as he believes this one is, that’s a high hope.

“They’ve grown up in a world where they’re not touching things other than a keyboard,” he says.

Technology has done everything for them, so they don’t understand the most basic things. And they have no idea of their own potential.

That’s why Turtle Island isn’t just Conway’s refuge. It’s his mission. Here, on this land, with a beauty that lifts the soul and a peacefulness that clears the mind, he shows them that they are capable and that they are free to set their own paths.

With just enough time before lunch for one more chore, Conway grabs a chain saw, gathers a handful of the Elon students, and heads to one of the shelters in the woods.

“What we’re going to do is cut down a tree in a direction that it doesn’t want to fall,” he says.

After a short walk through a stand of pines and over a small creek branch, Conway tosses a rope to an adult volunteer, who throws it around an upper branch on a tree leaning into the roof over the shelter’s porch. Several students, following Conway’s instructions, join the man in tugging the black locust away from the cabin.

“Yeah, you guys have a lot of power,” he calls out.

Right before he cranks the chain saw, he tells them, “Always have an escape plan. Always know where you’re headed. Know where you can change direction.”

Diane Summerville is a former senior editor of Our State magazine.