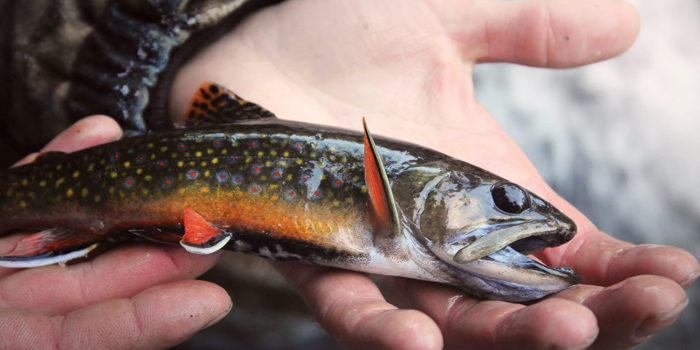 With the help of writers, foodies, and travelers, we compiled a unique set of information about mountain trout in North Carolina. Scroll down to see it all.

From Eddie T. Nickens essay, The Catch: Brook Trout, in the July 2011 issue.

The fish is there, of that I am certain. I saw it rise from behind a stone to slurp in a caddis fly in the deep shade of the rhododendrons. A splashy take, and then another. It is there, and it is hungry. 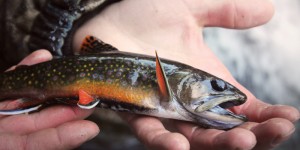 But this fish is also a trout, a brook trout, and this is its home and has been since the last of the glaciers slid northward from the Appalachian peaks. In the hand, a wild brook trout is a riot of color, but in the water, it utterly disappears. Blue-haloed, red spots become tiny bits of stream-bottom stone. Yellow vermiculations across a moss-green back turn to spots of dappled sun. Every aspect of the fish’s adornments is designed to keep it hidden, out of the clutches of otter and owl. And angler.

And everything about this fish speaks of these mountains. The same forces that prescribe the creek’s route from upper pool to lower — riffle and eddy, drop and pool — have figured the trout’s modus vivendi and shaped the sleek contours of its body. Such forces have, in turn, been shaped by agents more elemental and ancient — plate tectonics, glacial retreat, the working of water from millennia to millennia. Before the Pleistocene epoch, these fish were likely restricted to far northerly climes. Then, as the ice advanced, brook trout moved south with the red spruce, Fraser fir, and saw-whet owls into the southern Appalachians. Four times the ice sheets advanced over the continent and then retreated, shaping anew continental topography and hydrology, carving streams, leaving fish behind. Twelve thousand years have passed since the last of the ice disappeared. The brook trout remains, each new generation of fish as old as these hills themselves. 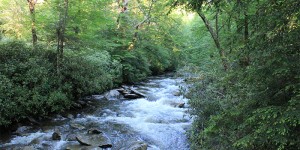 In the deep mountains of North Carolina, the Eastern Band of Cherokee Indians keep nearly 30 miles of waters within the Qualla Boundary stocked with trout. You may have never guessed they harvest 300,000 fish every year, a quarter-million of which go into the streams to be caught in both keeper and release waters. Click here to read more.

Travel Guide: Where To Fly-Fish In North Carolina

Thousands of miles of trout-filled rivers, streams, and creeks flow across North Carolina’s western counties. Many are stocked by the North Carolina Wildlife Resources Commission (NCWRC), almost guaranteeing success every time you wade into the water. Others are more remote and challenge even the experienced fisher to snare the wily wild trout.

After years of fishing in North Carolina rivers and streams, I have my favorites. Some I like because the state keeps them stocked. In these spots, I can hook two dozen or more decent-size fish on a good day.

I slosh into other waterways in search of wild trout. They lurk in the more remote regions, places that feel wild and ripe with the possibility of adventure. These fish are smart. They know the difference between an insect lighting on the surface and a metal-and-feather contrivance hopping up and down at the end of a string. It takes all the skill and patience I can muster to get them on my line.

In my view, there are no bad waters. Any day on a stream — even one when I decide that a particular stretch of river isn’t worth a second trip — is a good day.

Some streams, however, are more productive than others. Click here to see a few of my favorites. 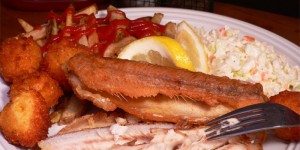 Steve Gordon shows us a step-by-step recipe for a mountain classic – brook trout.

It’s a fairly easy recipe that most folks can handle. Even if you don’t have Brook Trout available, you can use this recipe with Whiting or Tilapia. So grab your skillet, a little oil, and let’s start cooking.

From Charlotte Fekete’s article, Fresh from the River, in the April 2010 issue.

Fish this simple doesn’t require any fancy recipes, but there’s plenty of room for creativity. Chef Charles Hudson from Sunburst Trout Company is constantly coming up with new recipes and preparations — like a trout carpaccio or trout poached with saffron and apple cider vinegar. Click here to see three simple recipes he recommends for trout, including: