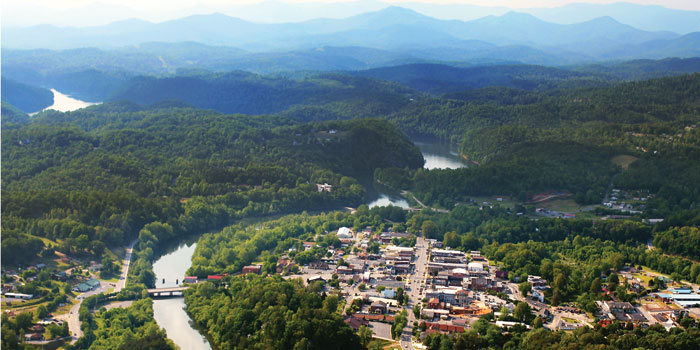 On a morning in Murphy, in a basement with no windows, 13 steps down from the sidewalk, right beside the wide downtown intersection once known as the Bull Moose Pen, James Hogan opens his two-chair barbershop.

He knows his customers will come. They always do. He’s been cutting hair here in this tiny basement spot in this tiny town in the far southwestern corner of North Carolina for 43 years.

He has a jar of Tootsie Pops and $1 videos for his customers and shelled peanuts for himself or anyone else who likes them.

As he waits, he listens to the crackle of his police scanner and the small-town commerce on his radio, which is tuned to WKRK 1320 AM, Murphy’s Country Gold.

In between tunes from Loretta Lynn and Tammy Wynette, listeners call the town’s lone radio station and sell everything from a bass boat to a camper cookstove.

For Hogan, it’s the coziness of the familiar he likes in this spot between two rivers.

Yet climb a small hill downtown beside the historic Harshaw Chapel and stand in the church’s cemetery, and you’ll discover what Hogan and his town of 1,600 people in Cherokee County have come to embrace.

As the day begins and the early-morning fog lifts, the shadows of the Appalachians roll toward the horizon in every direction.

Murphy is so remote that the capitals of Alabama, Georgia, Kentucky, South Carolina, and Tennessee are closer than North Carolina’s state capital of Raleigh.

There are no chain restaurants, no big department stores, and no big grocery stores other than Wal-Mart, which is situated beside the four-lane, the name locals give U.S. Highway 64.

But you can buy an old-fashioned milkshake at a downtown drugstore, catch a movie at a one-screen theater around the corner, and see people on Tuesday afternoons standing in line outside The Cherokee Scout, the town’s weekly newspaper, to buy the latest copy.

Hogan is just one.

“I grew up here, man,” Hogan says in his shop one morning. “When I was in the Navy, stationed all over, I couldn’t wait to get back home. I love Murphy. The mountains. The people. The style of living. It’s country, man, country.

“They say North Carolina ends at Bryson City and that we’d be better off being a part of Tennessee or Georgia because we don’t get much here. That’s what people used to say. But that don’t bug me. Murphy is like a hub. We’re 100 miles from Atlanta, 100 miles from Knoxville, 100 miles from Asheville. People like to say we’re two hours from everywhere, and around here, you throw up your hand because you know everybody.

“Well, even if you don’t, you still have to throw up your hand. That’s what we do.”

Country Gold is on the air, Bill is behind the mic, and the phone line is open. A call comes from a woman. She doesn’t give her name.

“Hey, Bill, how you? We’re havin’ some purty weather. … I love that song you just played, ‘What A Friend We Have in Jesus.’ So, can you play that song by Tammy Wynette, ‘Stand By Your Man’? Listen, you take care.”

At the Main Street Café, Phoebe Hembree juggles the morning crowd. She knows most of them. She talks to them in a sing-song voice, stopping by their table, order pad in hand, hearing the latest about their families.

She calls them by their first names, or simply something short for “Sugar.”

“Here you go, Sug,” she says to one customer, laying down a plastic plate of scrambled eggs, sausage, gravy, and a biscuit. “How’s Janice’s babies?”

She hustles back to the kitchen before coming through the swinging door to take another order.

Her morning customers come in the back, decked out in the workday dress — jeans, hats, first names on their shirts, measuring tapes in their pockets.

For 22 years, Phoebe’s manned the cash register at Main Street Café. She works with her husband Charles. He’s a native, and she’s from Siler City. But they’ve made a home in Murphy and a business downtown.

It’s a family affair. They work with their son Gabriel, their daughter Tanya, and their granddaughter Allyson inside a building that once was a bank.

“There’s not a lot of shopping places here,” Phoebe says in between customers. “But people adapt. They go to Atlanta, but they don’t seem to mind. After getting in that traffic, though, they can’t wait to get back here.”

She and her husband Dave once lived in Orlando, Florida, where they both had high-pressure jobs — she at Disney World as a coordinator of college and international programs; he at an asbestos abatement company he owned. The Florida traffic stressed them out, and they came to Murphy 11 years ago to fly-fish and get away. And they opened a coffee shop, The Daily Grind & Wine.

Neither had any experience in food or retail, and they never lived in a small town. But they’ve thrived. They turned The Daily Grind & Wine into an Irish pub and restaurant, and in 2008, their place served the first draft beer in Murphy since 1947.

They live on 20 acres beside Hanging Dog Creek. It takes Amy 12 minutes to get home — and she doesn’t have to go through a single stoplight.

Their son Chad, 30, works in the kitchen at the John C. Campbell Folk School in nearby Brasstown, and their daughter Autumn Grayce, 27, sings on a cruise ship. In May, Autumn Grayce got married in one of her favorite places, where the mountains act as a picture frame to the trees around her: her family’s backyard.

Bill Hughes is the town’s mayor. He’s been involved in Murphy politics since 1987. For 32 years, he was the principal of Murphy Elementary.

But before politics and before education administration, Hughes was a teenager in khakis and white buck shoes hanging out at the Henn Theater in downtown Murphy and talking about cars and girls.

Today, Hughes is 72, the third generation of his family in Murphy. He wears his initials on his starched sleeve and helps run the town from an office that displays photos of his grandchildren and photos of his past.

That collection includes a picture of him in overalls as a little boy and him as a class superlative, voted the friendliest, as a senior at Murphy High School, class of ’56.

“By God, I’ve been all over the state, but you could blindfold me on the way back to Murphy, and I’d know it when I was getting close,” he says. “It’s that sense of relaxation, less anxiety, less tension, less stress. You feel yourself slowing down and your hands don’t perspire on the wheel.”

Behind the bar at The Daily Grind is a sign any fan of the classic TV show, “Cheers” will recognize.

Tradition is strong here; homespun connections are easy to find.

Hogan, the barber, has cut Roy Dickey’s hair since Dickey was 4. Dickey is now a husband, a father, and the maintenance supervisor at the Cherokee County Courthouse. Dickey is 50.

Hughes, the mayor, met Barbara Jones in downtown Murphy on the street beside Parker’s Drug Store when she was 15. In June, they celebrated their 51st wedding anniversary. They’re now known as Granna and Granddad to four grandchildren.

Meanwhile, Wanda Rowland Stalcup, the director of the Cherokee County Historical Museum, has a saw.

It tells her story of being the youngest of 16, raised by her grandfather, who was a Baptist preacher who raised tobacco, grew corn, had an outhouse, and prayed at an altar in the woods.

That’s all on the saw, a scene Wanda painted herself of a life steered by Thomas Matthews Rowland, a man his friends called T.W. She called him Pa.

Then there’s Don “Rocky” Edgerton. Not many in Murphy knew him. But they know his parents; they live in Murphy. Folks know what Edgerton did. He was a United States Army sergeant, fighting in Afghanistan, far away from his wife, Deana, and his young daughter, Jordyn.

At his memorial service, hundreds of people lined Bulldog Drive and stood outside the St. William Catholic Church in 90-degree heat. They held American flags, showing support for a soldier they hardly knew.

Scott Wallace, a photographer at The Cherokee Scout, caught it all through his lens. Wallace lived in Los Angeles, California; Chicago, Illinois; New York; and Florida before moving to Murphy five years ago to take a job as the newspaper’s first full-time photojournalist.

Like many, he came for the beauty. Yet he sticks because of that feeling of community, something he saw that hot summer day outside St. William Catholic Church.

In an editorial about Sgt. Edgerton, two days before his memorial service, The Cherokee Scout stated: “He didn’t attend school here, marry a local girl, or buy a house here, but he was still happy to call Murphy home.”