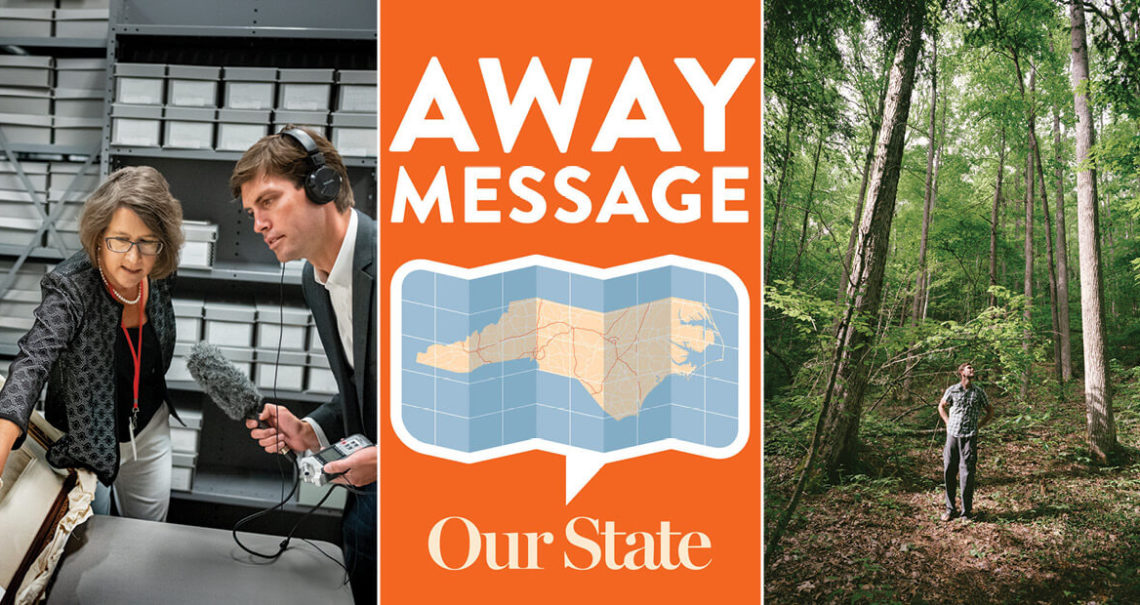 This happens to be a big week for podcasting, what with the Thanksgiving trips and all. If you haven’t had a chance to dive headfirst into Our State’s podcast, or maybe you’d like to revisit some places we’ve gone to in the past, we recommend these episodes of Away Message:

Season 1, Episode 1: The Most Remote – Back in 2017, I kicked off this podcast with an episode where a few of us calculated the most remote spot in North Carolina, and then hiked there. Fun fact: The music in this pilot episode sounds different because I made it on my phone with GarageBand. But it’s still one of our most popular episodes.

Season 2, Episode 4: How To Get Away With Murder (in 1892) – Sometimes reporting out a story is easy, because the stars align, the people you need to talk to are readily available, and the information you need is easy to find. This was not one of those stories. I tried to find out what really happened in a crazy-but-true murder case from 1892, where William Hall fired a fatal shot across a state border and was able to beat the rap several times. I drove to one of the westernmost parts of North Carolina, found crucial documents buried in a state archive in Raleigh, tracked down descendants of the guy who got away with it in Florida and St. Louis, and, finally, discovered Hall’s final resting place in a small graveyard in north Georgia. Also, this is the only episode where we got actors to reenact actual dialogue from a century ago because, as you may know, podcasting microphones hadn’t been invented yet.

Season 2, Episode 7: Stealing Bill – You may not have known that North Carolina had its own copy of the Bill of Rights … Or that it was stolen during the Civil War and recovered during an FBI sting operation in 2003. The fun part of reporting this one? Everybody who was in on the plan — from the undercover FBI agent who led the sting operation to former Gov. Mike Easley — was really, really excited to talk about it.

Season 3, Episode 2: A Rescue In The Linville Gorge – For years, I’ve been hearing about rescues in the Linville Gorge, which is one of North Carolina’s most rugged places, but a while back, I came across a YouTube video showing just how intense a rescue can be. So I hit the trail in the gorge, found the guy who had to be choppered out, and put together this recap of the seven-hour mission that got a badly-hurt hiker out of a really tough spot.

I’ve also been 1,800 feet above the ground on a TV tower, on a former Coast Guard light station 32 miles off the coast, in a field where a piece of a nuclear bomb is buried, and in the woods where people keep seeing Bigfoot. Plus, in our most recent episode, we flew to Boston (there’s a perfectly good explanation for that!). A list of all episodes is here, and you can subscribe to our show on Apple Podcasts, Spotify, Google Play, Stitcher, Overcast, and any other place where you listen.