Join Our State at Transfer Co. Food Hall in Raleigh on February 18, 2020, from 4 to 8 p.m. as we bring the magazine to life in one of our featured destinations. For more information, click here.

That tornado really did a number on the place. “Half of the roof was gone,” says Nick Neptune, pointing to the rafters of Transfer Co., the food hall in southeast Raleigh that he manages. A few years and a gut-remodel later, this former transfer hub for bus lines draws a robust crowd from lunchtime through dinner. Today, a knot of high school kids have walked over for ice cream and burritos; coffee meetings are two cups in and counting; laptops share space with plates of fried drum collars and huge, messy burgers. Later, the after-work oysters-and-beer folks arrive. The scene around the communal tables is as diverse as the menus on display, which include Italian flatbreads, Argentine empanadas, Mumbai street food, Korean spareribs, and more. “Community is what we’re all about,” says Neptune, who, along with co-owner and developer Jason Queen, envisioned this 16,000-square-foot space as a reflection of the vibrant and ever-changing city they love.

Transfer Co. is an ideal model for what the food hall movement is all about: giving local chefs and food vendors a place to shine in a spacious repurposed building. A neighborhood gets a new gathering place, and diners get a taste of the world under one roof. And sometimes that comes with a side of spectacle, too. “You can see the bagels being made, the seafood being cut,” Queen says. “We have a butcher. We have freshly made pasta.”

Variety is the hallmark of food halls and a key to their growing popularity. Charlotte has two; the newest, Optimist Hall, has made The Dumpling Lady a destination and Mason jars filled with mango slushies photo-worthy. Besides the food halls in Charlotte and Raleigh, at least five more are on the horizon from Asheville to Selma. “It’s a trend in eating that I don’t think is going away,” says Niall Hanley, owner of Morgan Street Food Hall, also in downtown Raleigh. “For younger generations, choice is the big thing. Food halls scratch that immediate itch. It’s where you can Instagram about it, eat, and go.” 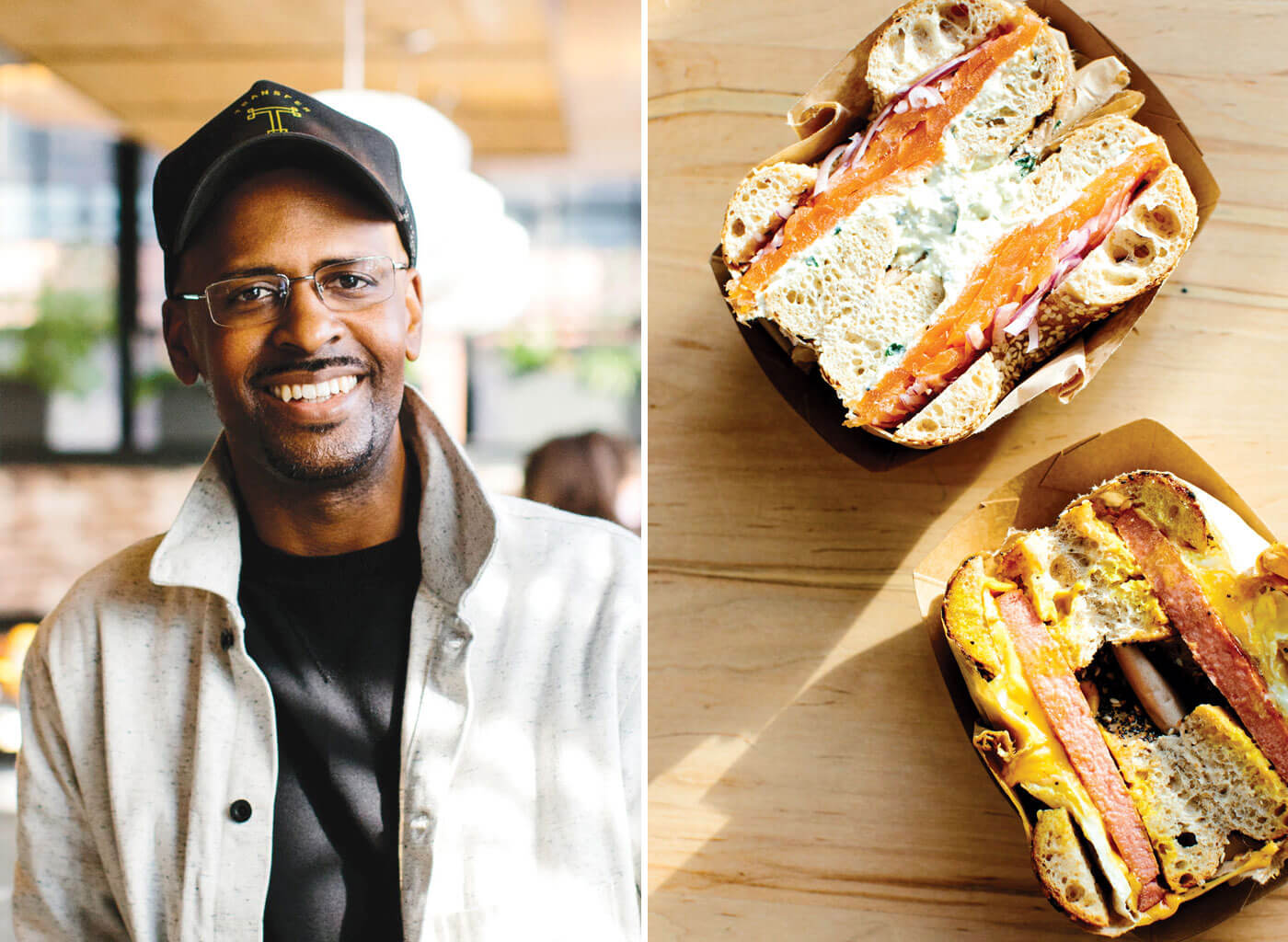 Often housed in historic structures and remodeled to industrial-chic perfection, the spaces themselves are part of the appeal. Morgan Street Food Hall opened in what used to be a warehouse for a construction company; its former loading dock is now a bar and patio. Over in Chapel Hill, Blue Dogwood Public Market opened in what was once Fowler’s Food Store, one of the town’s first supermarkets. Transfer Co. opened in the spring of 2019 in the former Carolina Coach Garage and Shop. Queen, who had previously worked in historic preservation and lives a few blocks away, was awed by the building’s patinaed concrete floor, soaring steel trusses, and angular roofline. Turning it into offices or apartments wouldn’t allow as many people to see the original beauty, so he and the building’s two other owners settled on a food hall concept. The height of the stall ceilings are set to historic preservation standards, so customers can still appreciate the historic architecture. As Queen puts it, “You kind of let the building tell you what it wants to be.” 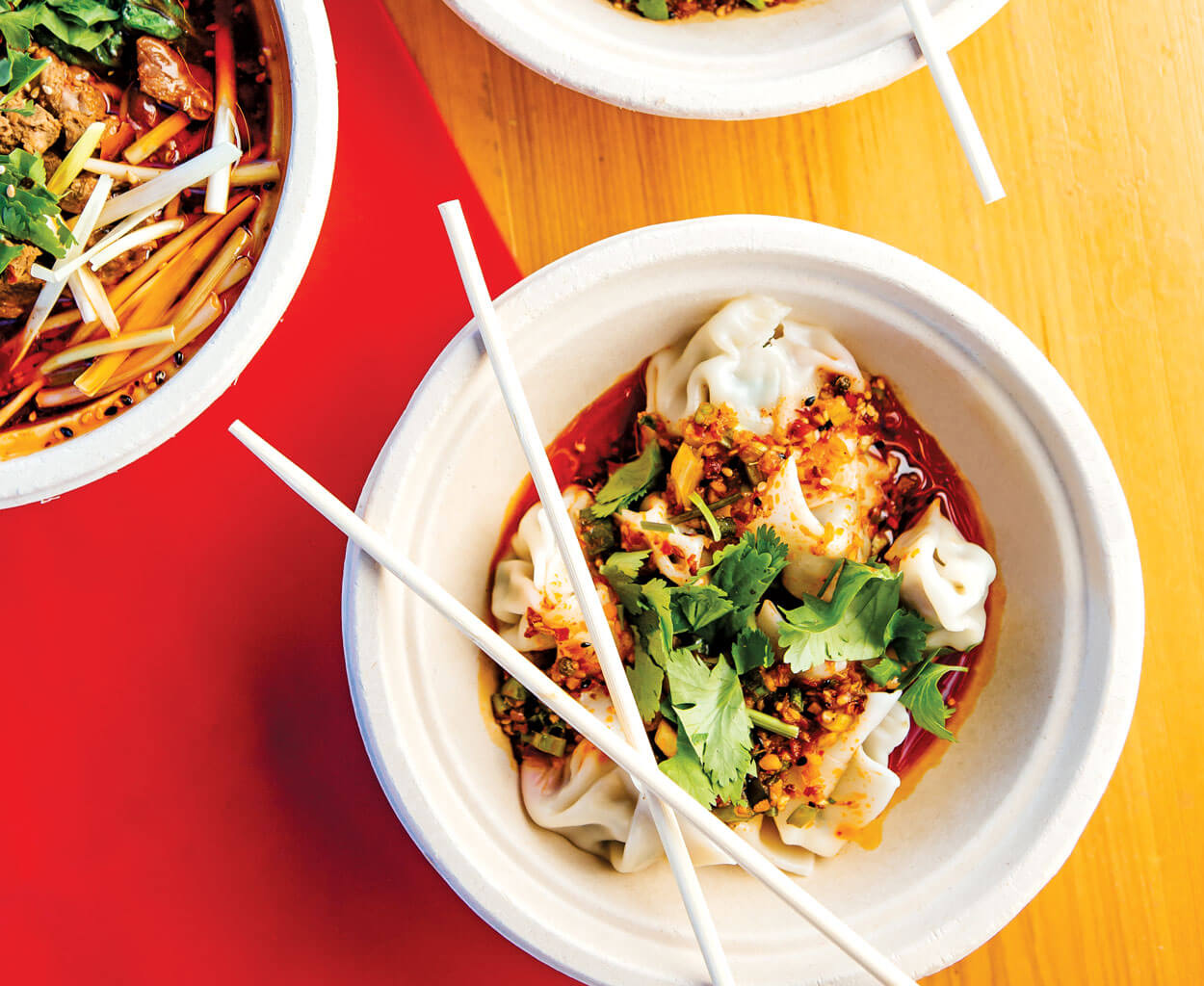 If you look closely at Optimist Hall, its history is hiding in the details. For more than 100 years, it was one of many mills that helped make Charlotte the center of the South’s textile industry in the early 1900s. For almost 80 years, this landmark was part of Highland Park Gingham Mills, the country’s third-largest gingham manufacturer. Now, spindle-backed chairs dot the dining areas. The pale green walls are reminiscent of a bolt of mint-colored gingham. The building is even anchored on one end by The Spindle Bar, which serves drinks with names like By the Yard and Threads of Fate that celebrate the building’s previous incarnation.

The connoisseurs of soup dumplings may not even have been born when the looms here were going full speed, but in giving this building a new purpose, the food hall is honoring the neighborhood’s past. “It’s putting a little bit of Charlotte’s history on the map,” says Erik Johnson, co-owner of White Point Partners, which bought the 12-acre property in 2016 in a joint venture with Paces Properties and opened the food hall in August. “We’re paying homage to the entrepreneurial spirit that was there when it was a textile business.”

For entrepreneurial chefs, food halls are the next step in the evolution of food trucks, which have brought eclectic offerings to towns big and small. A whole rodeo of food trucks, in a park or along a downtown street, has become an event in itself. Corralling the ambition and creativity of those mobile restaurants into one shared space — indoors and with customer parking — is the genius of the food hall model. 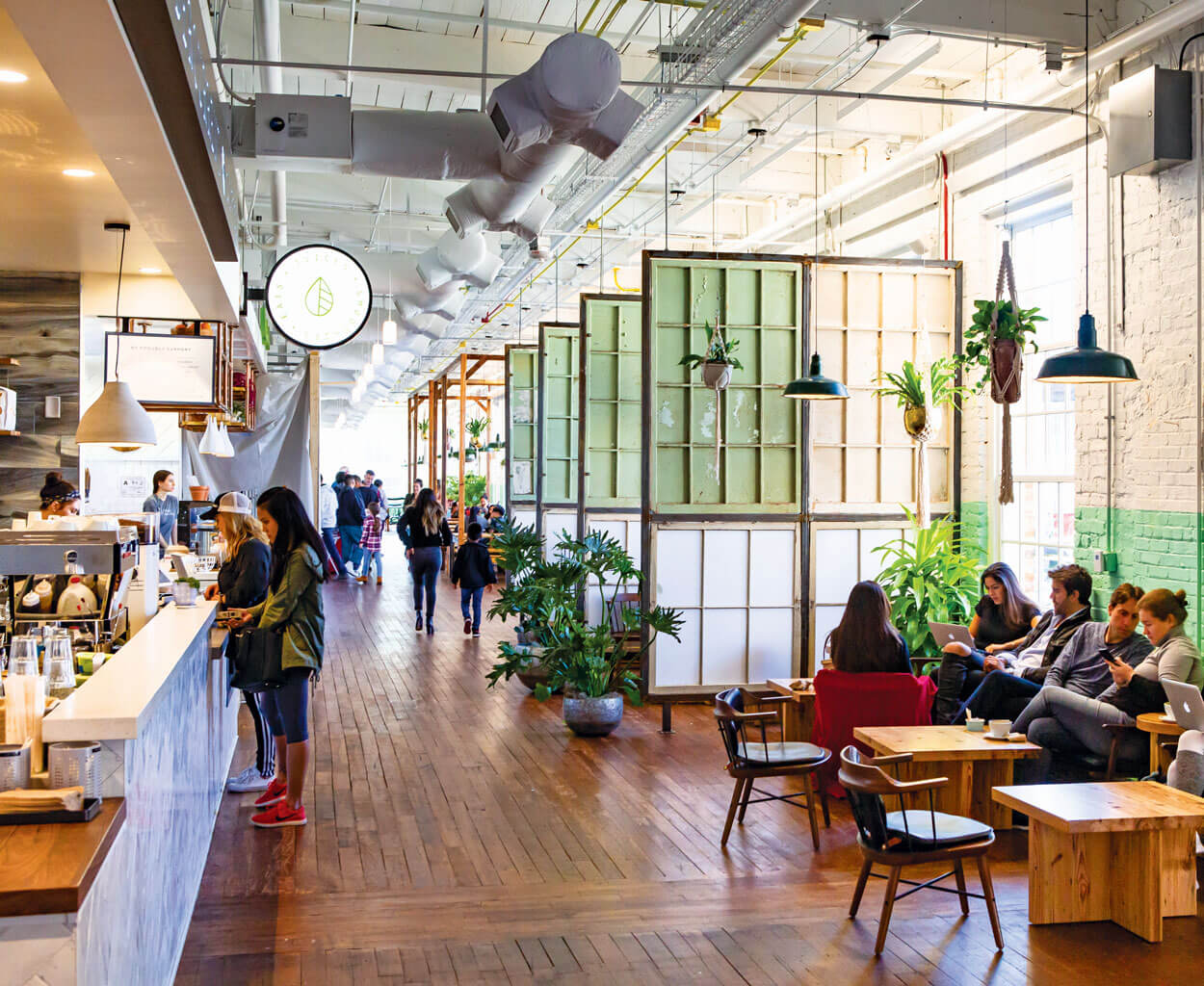 Like many of their food truck compatriots, the chefs who sell burgers, tacos, or curries in these shared spaces are often first-time business owners. The food hall gives them a chance to lean on each other for support, ideas, and collaboration. “It’s sort of like a start-up hub,” Queen says. While the food hall operators manage the building, security, and cleaning of common areas, the entrepreneurs can focus on the dishes they serve.

That was the impetus behind the state’s first food hall: 7th Street Public Market, which opened in Charlotte in 2011. Manager Chris Clouden explains that the nonprofit food hall was intended as a small-business incubator with a focus on celebrating the city’s food culture. Clouden and his team offer educational programming on topics including labor and employment law, marketing, and small-business financing. Thirty businesses have come through the space, and a few have expanded to several locations, including Pure Pizza (two), Hazelnuts Crêperie (four), and Not Just Coffee (six).

Clouden advises the folks who run food halls that their main job is to provide a welcoming space for businesses and diners. How they do that often reflects their locations. Raleigh’s Transfer Co. is located near several schools and has hosted PTA board meetings and fund-raisers. Blue Dogwood aims to support the type of family-owned businesses that used to thrive on Chapel Hill’s Franklin Street. Sarah Boak, a partner in Blue Dogwood, says that her team recruited chefs in that mold, and they discovered that many had started their businesses because they couldn’t find anyone else in the area making Persian food, say, or Latin-inspired vegan dishes. “I didn’t realize how much that vision would resonate with our customers,” Boak says.

Food halls may have a loftier purpose, too. In an era when too many of us are attached to our devices, even at mealtimes, the communal tables and bustling atmosphere of a food hall inspire interaction and connection. Original architectural details like honey-hued heart-pine floors and rustic brick walls create an inviting atmosphere. And an eclectic selection of specialties means that everyone can have whatever they’re craving — plus a bite of that newfangled thing a friend just ordered — while seated at the same table.

Adair Mueller, owner of Durham Food Hall, which is set to open this winter on the site of a tobacco auction warehouse, designed the dining areas to encourage conversation. Her favorite spot: a Z-shaped dining table that will seat 35 people. “It’s a place where you can go and physically interact with people,” Mueller says. “You might sit down as strangers and leave as friends.”